A brief window of opportunity opened last weekend that prompted me to get out and trout fish again. I was the first time I'd be fishing for trout since 2020's Labor Day weekend, so excitement was abound. The plan was to head up to north Georgia on Friday night, then get pretty much a full day of fishing in on Saturday.

Being that the local delayed harvest water had just been stocked the day prior, the "crowds" decided to descend on those well-known waterways. On the other hand, I had the smaller, yet also well-know wild trout water to myself, with not another angler to be seen. Off to a good start. 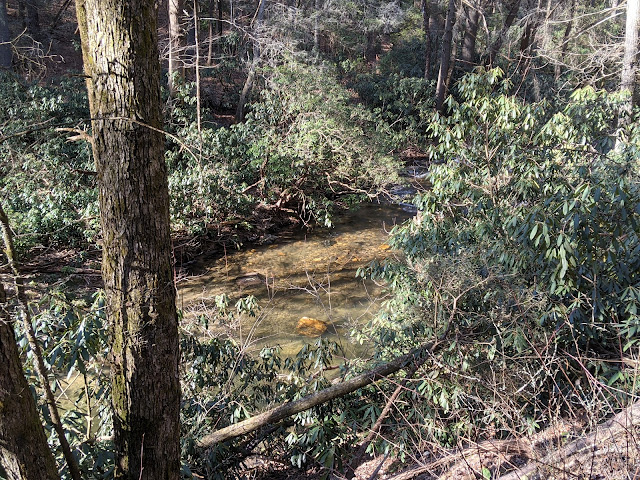 Upon arrival, the tailgate ceremony of "gearing up" began. In doing this, I noticed something unfortunate... I need to drop some of that quarantine weight! I've probably put on twenty pounds over the past year, largely due to inactivity and overeating. This made getting wadered up a chore. It wasn't so much pulling them up, rather straining to bend over to tie my boots. Just didn't expect that spare tire around my waist to get in the way as much as it did. Yikes.

However, once in the water, my blood pressure settled down quickly and I began savoring that "good to be home" feeling. Fishing was generally slow at the start, allowing me to unwind, enjoy the surroundings, and almost get lost in a meditative state. For the first hour and a half I don't think I even moved a fish, but that changed once the sun got a little higher in the sky. 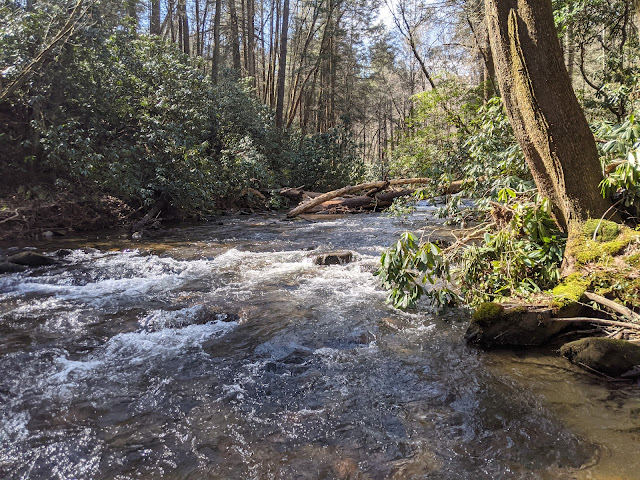 First, a light hatch started popping off sending tiny bugs into the air. This was followed by a bit of activity in a nearby pool. Then after a short drift through some promising riffles, I had my first trout of the year on the line. It wasn't particularly large, as most of the fish in these headwaters aren't, but it certainly was nice to get reacquainted with the local rainbows. Removing the release box from my pack, a quick photo was in order. 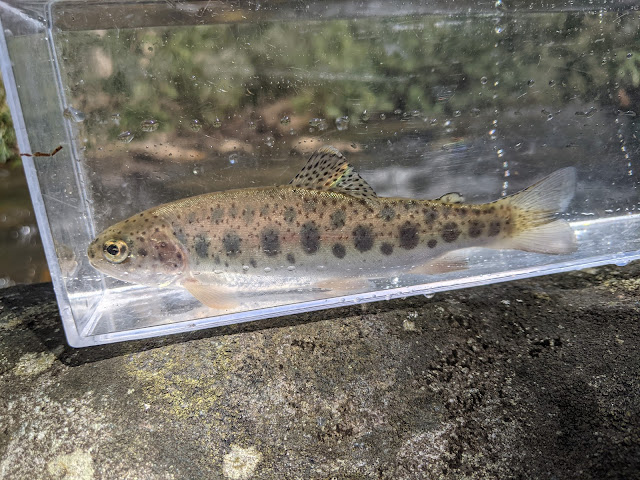 The day proceeded as such, bringing a handful of fish to hand. Sometimes they came in mutliples; two or three over fifteen or twenty minutes. However, sometimes quite a bit of time would pass before they paid any attention to my flies again.

This 8-inch rainbow was probably the largest of the day, which isn't saying too much. 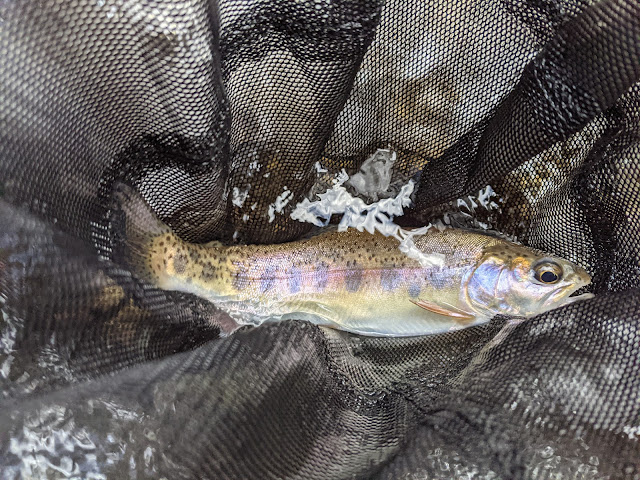 And this tiny little parr, who could barely wrap its mouth around the fly, was the prettiest. 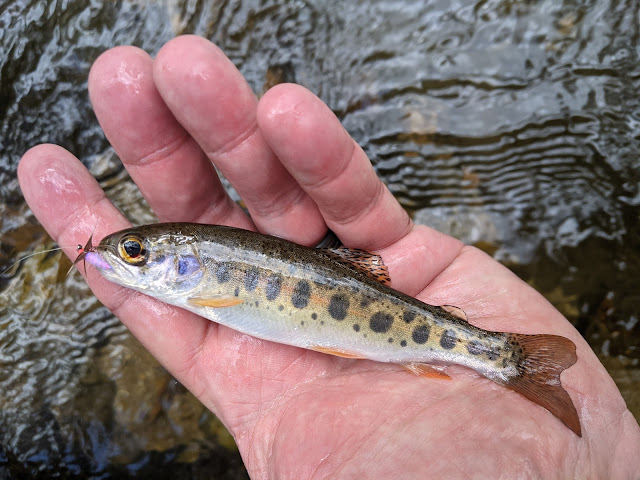 This trip was a "tenkara" outing, using the Oni Type III in the morning, then switching over to the DRAGONtail Mutant after a quick Fig Newtons lunch. By the way, figs are totally underrated, even when not in Newton form. Like many people, my wife hates the thought of them, but I love them. Give me a dried Turkish fig any day and I'll be a happy man. 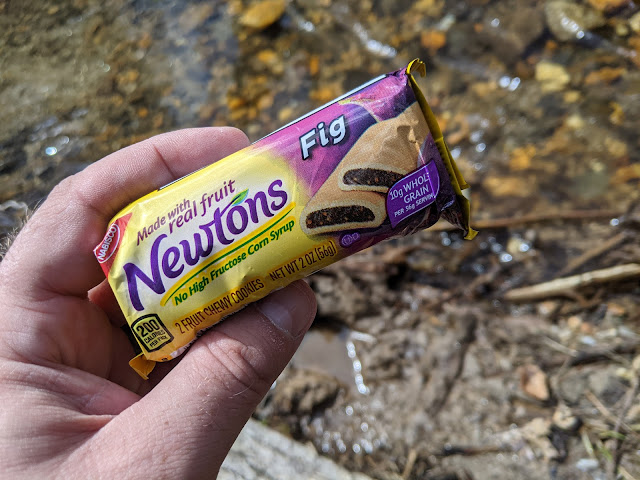 Back to the rods, I'll be doing a write up on the Mutant over at Tenkara Angler in the not too distant future. While both rods served their purpose, the Mutant definitely had a bit more mojo on its side on this day. 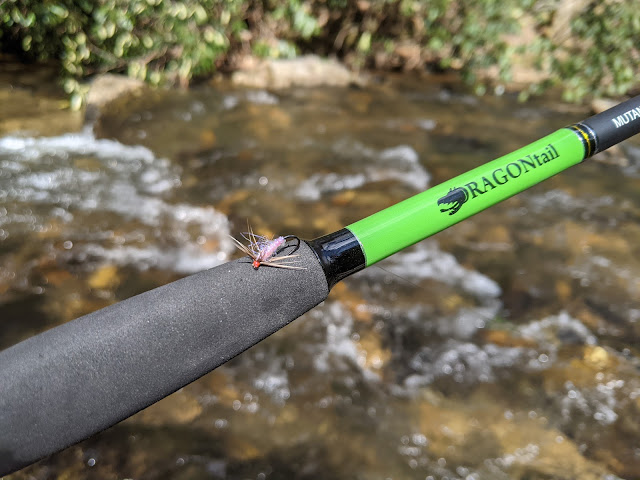 Before I knew it, the sky began to fade to dusk and it was time to climb the bank and exit the stream. Waders off, rods stowed, an emotion of warmth radiated through my body as I pulled onto the dirt road that led out of the park. Or maybe it was just the heat being cranked up in my SUV...

Either way, it was a successful first trout-ing of the year. Hopefully setting the stage for many more to come. 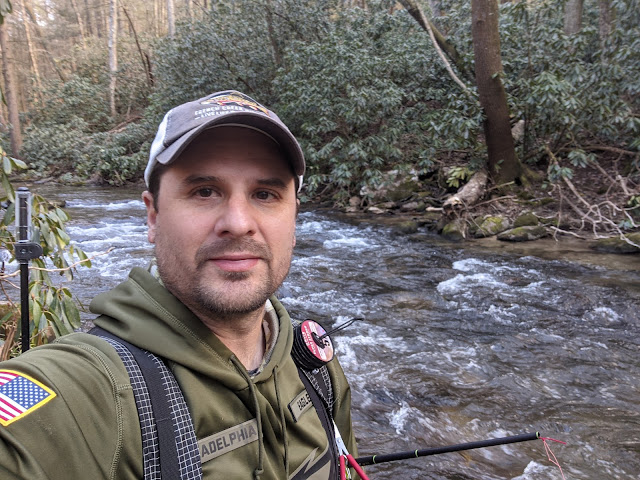 Oh, and as for Sunday, I didn't go fishing. But I'll touch on that a little more in an upcoming post...