In reviewing my posts from 2021 I realized that I never bothered to write up two short trips I made to Valley Creek during my family's 3 week return to Philadelphia in July. While the weather was warm (we were there around the 4th), the mornings in Valley Forge were nice and cool, as was the water. At least until the sun got high in the sky. 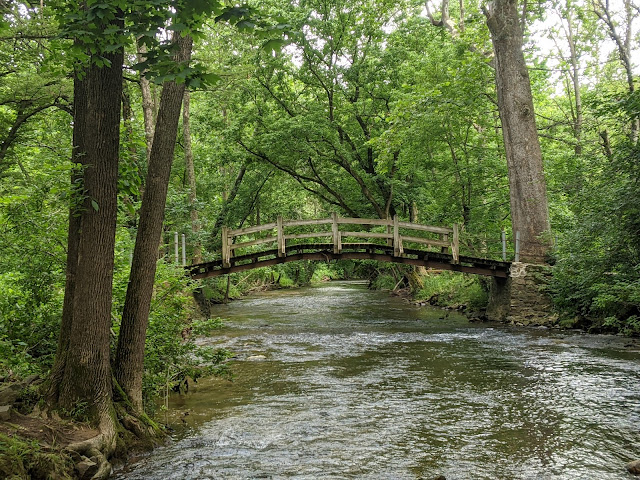 Yeah, the wooden bridge. It's not the most famous wooden bridge over Valley Creek, but for those that know where this is, they also know how convenient it is to use to access the stream.
On this day I took my Orvis 3-weight Superfine Carbon on its maiden voyage. I picked it up on sale when Orvis discontinued the model in favor of the fiberglass version. In the time I've fished it I've really enjoyed it. A bit more light in hand and fun to cast than my old Redington Classic Trout, (although that's a nice rod too and much less expensive than this Orvis) - I kinda regret selling it. 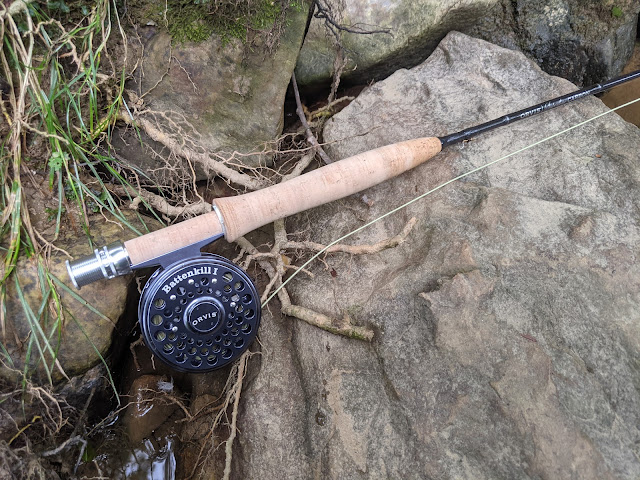 After hitting the water at around 9AM, it didn't take long for me to find one of Valley's brown trout. A fine specimen of what the creek has to offer, and one of a few I'd bring to hand on the day. 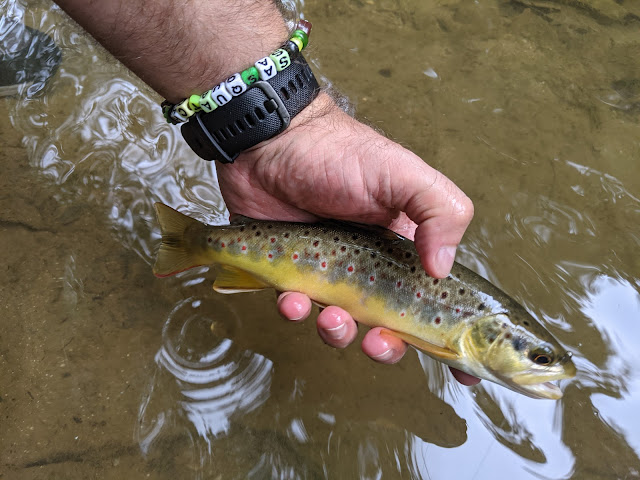 The fishing wasn't epic by any stretch, but with air temperatures only reaching the 70s, it was an absolute joy to be outside. A lot of other people had the same idea, as there were tons of folks not only fishing, but also riding horses, walking dogs, playing in the water, and all the other things people do on and around trails within a popular park. If you look closely at the photo below, you'll see some people getting their feet wet right beyond the metal bridge. 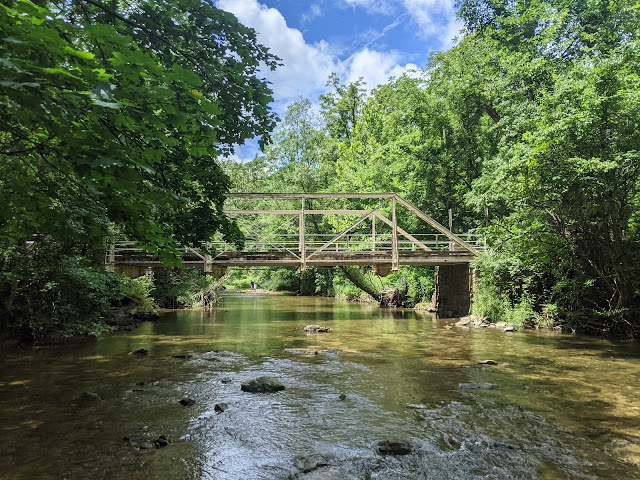 This day was to be a tenkara day. Not getting into semantics, I'll call it tenkara here, but I largely fished with beadhead nymphs... which is decidedly #nottenkara. I met up with a local fixed line angler named George that I had met on Facebook and we pretty much had our run of the creek that morning. 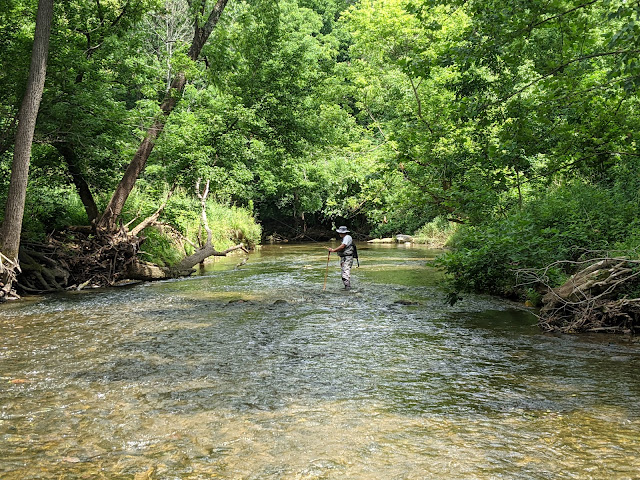 It was a bit warmer than the prior week, so we were only going to fish in the morning. If I recall, I caught 3 or 4 browns mostly in the riffles. 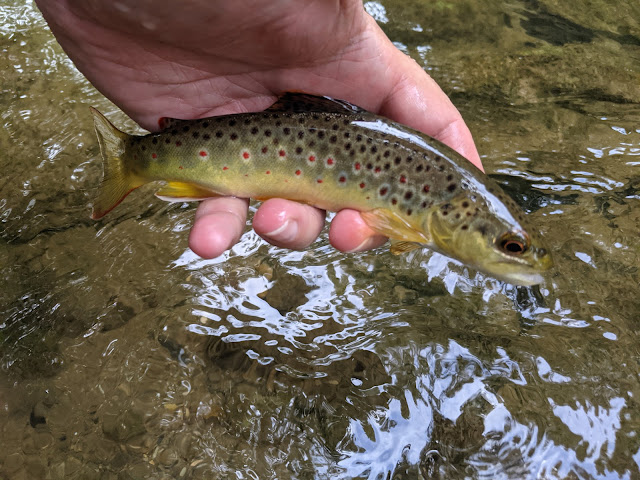 I think George caught one or two as well, I don't remember exactly. It was one of those fishing trips where you meet up with somebody and chat for a bit, but give each other plenty of space on the stream.
George was within view, but we were never fishing next to each other. That said, we'd occasionally meet up and swap stories with lines out of the water. 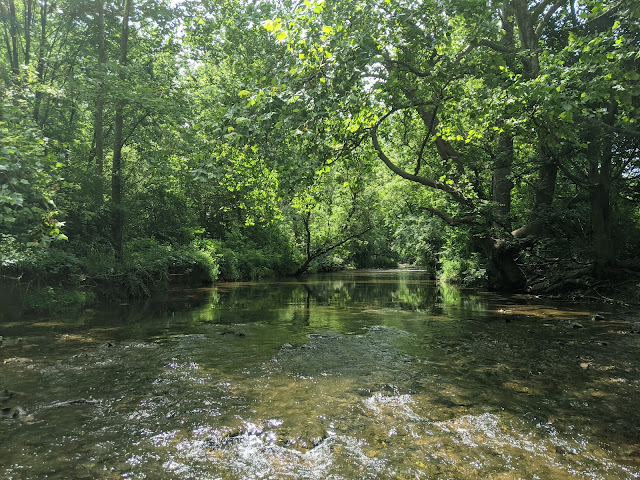 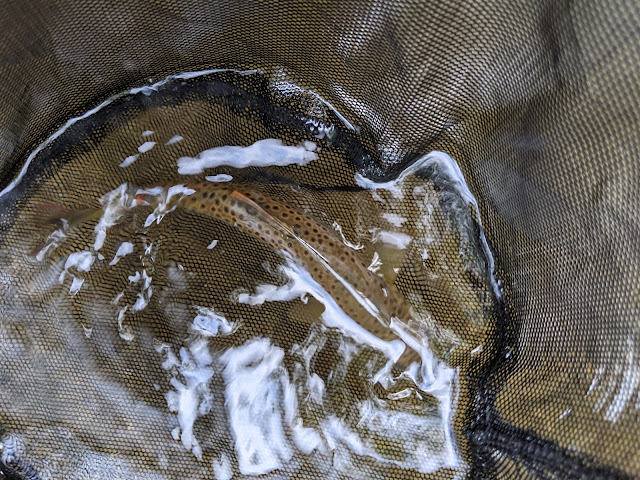 As planned, we called it quits around lunchtime. Mother Nature's oven was now on full blast and the fishing activity had diminished considerably. After collapsing our rods, we walked back up to the parking lot and stowed our gear while exchanging a few final stories about upcoming fishing plans.
George is a great guy. I'm thrilled we got to meet up and I'd love to fish with him again someday.
Posted by Michael Agneta at 6:00 AM