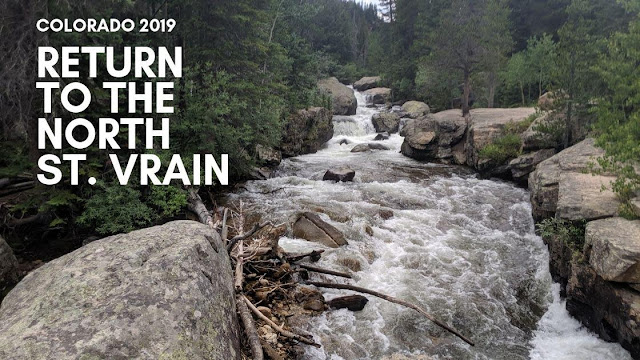 Time travel is sweet, particularly when it's to your benefit.

I had a 6:30 AM flight to Denver last Friday. Fortunately, there's a 2 hour time zone difference, so the four hour flight touched down in Colorado at only 8:30 AM local time. Solid.

After picking up the rental car, snagging a fishing license (Colorado, why don't you sell the type you can print out online?), and grabbing a quick bite to eat, I headed out to find some trout.

My original plan was to hit a trailhead that led into the Indian Peaks Wilderness Area. There was a certain stream and trail I wanted to try, but other day hikers and general outdoor recreators must have had the same plan. Not only the small lot at the trailhead, but all of the legal parking a good few miles down the road was packed solid. So I bailed. Time for Plan B.

Plan B was the North St. Vrain in Rocky Mountain National Park. I've fished there before, so I knew how to get there, and more importantly remembered that it had somewhat ample parking. Done deal.

Fortunately, my hunch was correct. While the trailhead lot was full, I was able to park at a picnic area a short walk up the road, so I grabbed my gear and headed up the trail with childlike abandon. 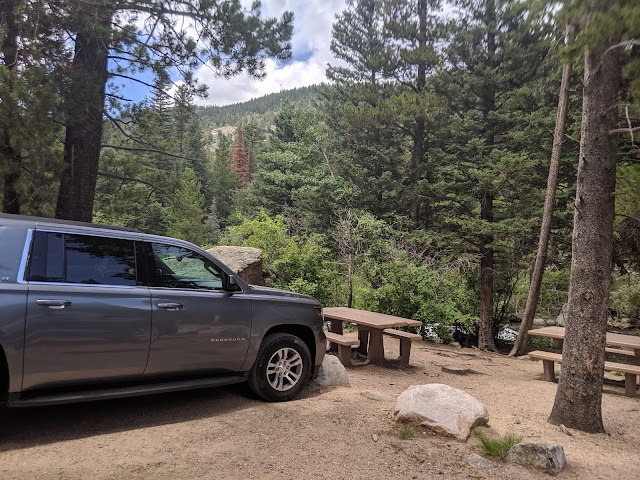 Whoa, upon arrival, I was greeted by a creek that was pumping out quite a bit of water. Colorado got a huge snow pack this past winter, so the melting and run off has been a bit longer and later in the year. 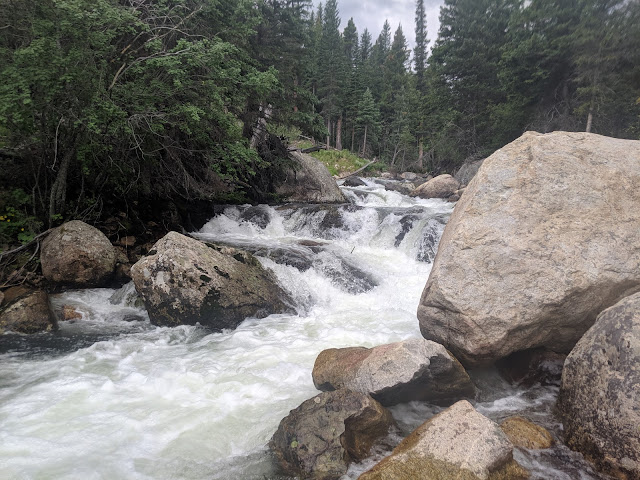 This was definitely going to be quite a bit different fishing than the last time I was here. Gone were the calm runs, meandering bubble lines, and gentle plunge pools. Picking soft spots behind rocks and along the banks, or suspending a fly in eddies was going to be winning ticket on this day. 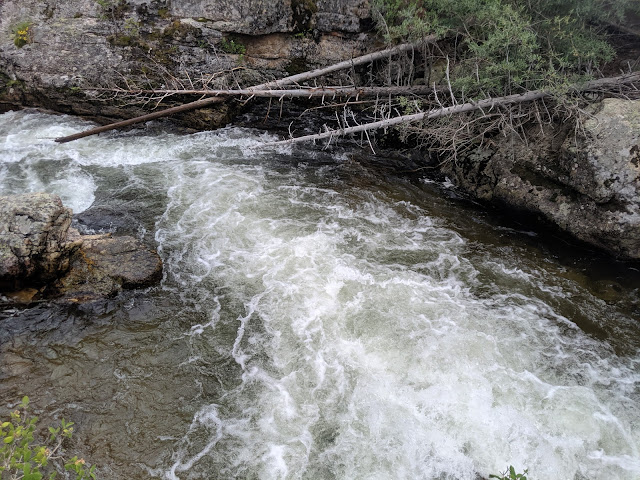 Luckily, those tactics worked swimmingly and fishing was quite productive. It was definitely a brook trout sort of day, and they were particularly cooperative when it came to pulsing or suspending a road kone kebari on the end of about 4 feet of 5x tippet, 12 feet of 3mm level line, and the Nissin Royal Stage 320 rod. 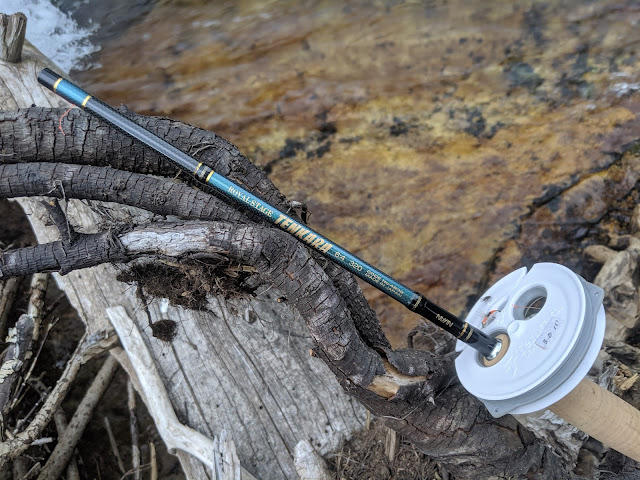 Since the water was so swift, it was difficult to wade in the creek itself for any significant length. As such, using the trail to strategically pop in and out seemed to be the path of least resistance. I probably missed a bit of holding water, but I was getting enough action at the end of my line where it didn't seem to matter. I'd save that water for another day (maybe a quick weekend later this fall?)

Here are a few of the colorful, albeit invasive, jewels of the creek... 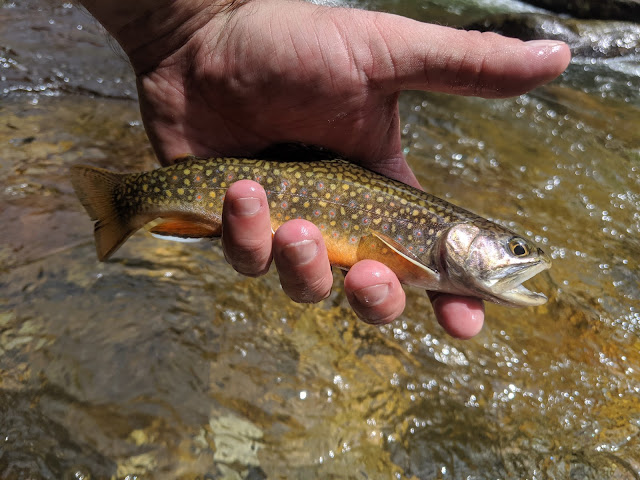 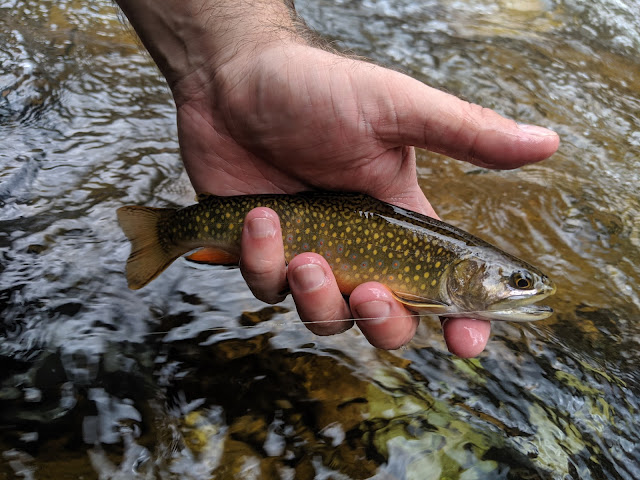 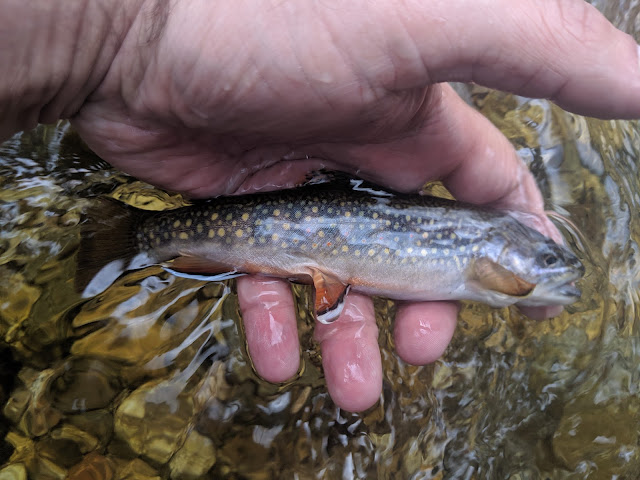 I had originally hoped to hike up above the one large set of waterfalls (Calypso Cascades), up into greenback trout territory, but I chose to turn around at that point when the skies opened up for a solid early evening rain shower. I had at least an hour's hike back to the car, so it just seemed prudent to call it quits for the day. The wildflowers were out in force, which made that walk very enjoyable despite the unexpected drenching. 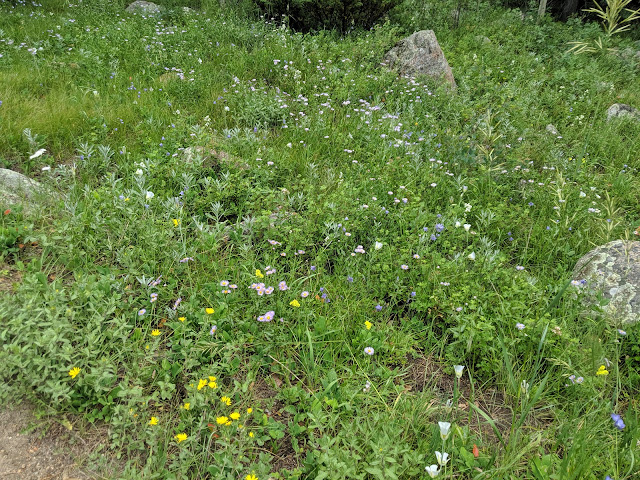 While the first day in Colorado didn't go exactly as planned, it was still awesome to be up in the mountains. Plus, I'd still have a chance to fish some more on Saturday and all day on Sunday, so all considered, things were off to a great start!