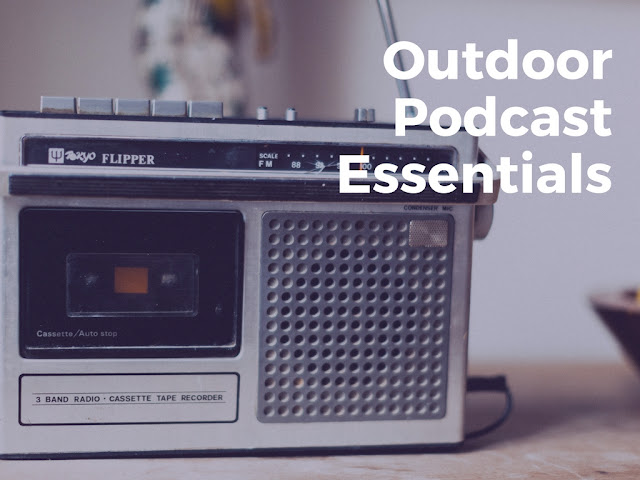 With an upcoming road trip to North Carolina on deck for the end of the week, I thought it might be worthwhile to dig into the podcasts I'll likely be listening to en route (given they publish a new episode between now and Friday). Not certain if you're a fan of fishing or outdoors podcasts, but personally I think these are consistently the best... and I consume them voraciously on my drives to and from work each day.

These are my Outdoor Podcast Essentials...

Anchored with April Vokey
I think this is my favorite fishing podcast right now. I think it's because April not only interviews people "in the now" of fly fishing but also reaches out to so many historical figures as well. The recent podcasts with Ed Rice and Andy Mill were both phenomenal, each trailblazers in their own right.


The Orvis Fly Fishing Guide Podcast
Kind of the standard for quite some time, Tom Rosenbauer usually reviews a reader mailbag for half the episode, and interviews somebody for the second half. For whatever the reason, I find the interviews hit or miss, sometimes engaging, other times just there, but I always seem to find the reader mailbag questions fascinating...


The Fly Tapes
This one is pretty rad as it features fly fishing writers, all of which performed on the Writers of the Fly live reading series, as well as published in The FlyFish Journal. As somebody who has written a blog for a while now, I can certainly appreciate some of the insights these authors give into their work (even though I'm nowhere close to their level).


Tenkara Cast
You know me, I'm a Tenkaradork™ ... and this is pretty much the only tenkara-exclusive podcast you'll find out there today. Daniel Galhardo of Tenkara USA does a good job mixing tenkara or fly fishing topics with conservation issues.


The DrakeCast
Not going to lie, this one is growing on me. It's a relatively quick play, usually around a half hour, and you'll likely leave each podcast more educated about a species or fishery than you were before you listened. The recent podcast on "Midwestern Smallmouth Bass" was equally entertaining & educational.


Remote No Pressure Podcast
Currently on a bit of a hiatus, I was enjoying this podcast earlier this summer. It's usually motivational in nature. Host Jeff Troutman typically interviews guests that tell their stories of overcoming something daunting in their life, sometimes outdoor themed, sometimes not, as a way to inspire others.


The Itinerant Angler Podcast
Kind of the "Granddaddy" of fishing podcasts (I think it's like 10 or 12 seasons old), this is just a fun listen. Plus there is such a large library of "back-issues" covering practically any topic, there's almost unlimited listening to be had. When new episodes of other podcasts aren't coming out quickly, I always hit the IA's vault to fill the dead space.

The Outdoor Biz Podcast
While I don't work in the outdoor business, I've worked in the sporting goods business for almost two decades. Rick Saez takes the time to interview prominent figures from the outdoor industry about their careers in business, favorite pastimes, and a few other standardized topics which once you listen to a few episodes over time, really yield some wonderful insights that can be applied to any workplace.


MeatEater Podcast
I don't even hunt and love this podcast. Steven Rinella just cracks me up, and carries on his show in such a conversational tone (one prone to meandering) that's really entertaining. Plus, he does hit on fishing and general outdoorsmanship subjects too, besides just hunting. I always learn something listening to his podcast, and find the sometimes hour and a half to two hours just fly by over the course of a few car rides.

Good Times with Steve Simeone
I briefly worked with Steve back in Philadelphia back around "the turn of the century." Since then, Steve ditched the office life, moved to California, and has become a rather successful stand-up comedian. His podcast usually features a fellow comedian, and while they talk some about the business, they more often talk about life, particularly all the immediately relatable "good times" they had growing up. Steve's gratitude list is always a highlight and really makes one introspective and want to be a better person.


Rights to Ricky Sanchez
This is a Philadelphia 76ers/NBA podcast that unless you were a huge Sixers fan that understood a ton of inside references, it may be difficult to follow along with. (#lickface) The RTRS is podcast generally credited for making "Trust the Process" a commonly known phrase in sports circles. That said, it's also hugely entertaining because the Sixers mostly serve as the backdrop to other conversations on pop culture that inevitably pop up.


Monsters Among Us Podcast
I just started listening to this one. It's more or less a call-in show where listeners call in and tell their strange stories of mysterious creatures like Bigfoot, the paranormal, UFOs, and stuff like that. Then, host Derek Hayes sort of picks apart each story, presenting both a scenario in which it could be true, or perhaps a simple misinterpretation. It's pretty damn good... a bit creepy... oh, and the host likes to fish... so there's that too!

So those are my favorites... what am I missing?
It's gonna be a looooooong drive to North Carolina, so I'm game if you've got another podcast for me to add to the playlist!