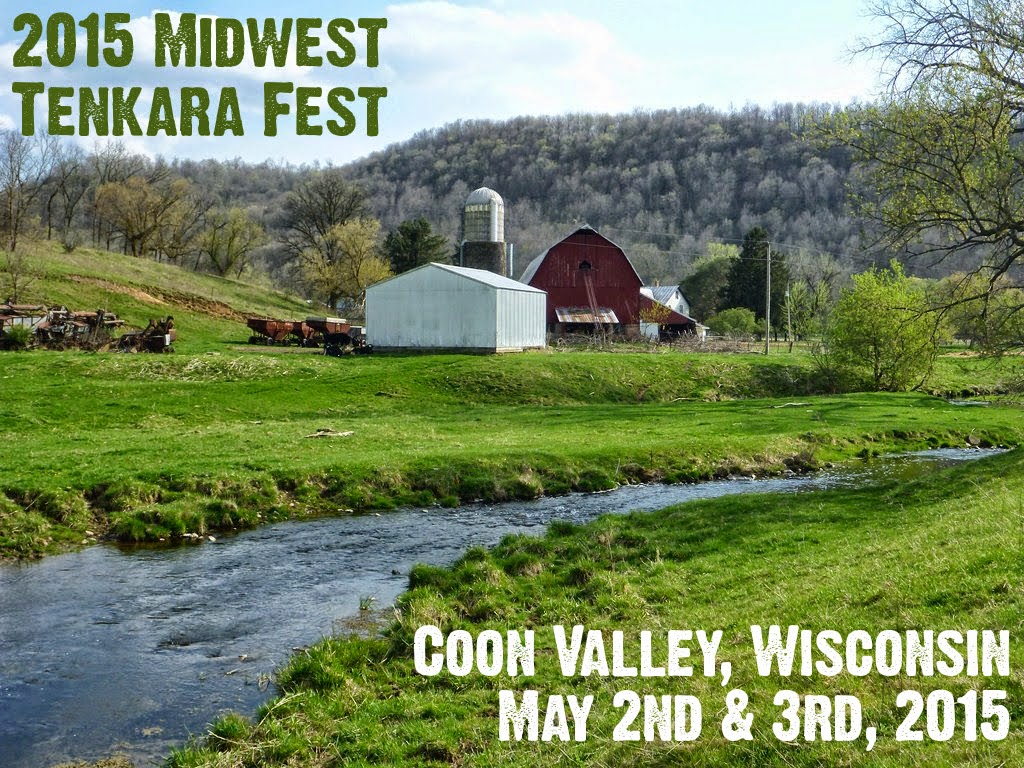 The first Midwest Tenkara Fest (MWTF) was held in Wisconsin last weekend. Forever seeking a good excuse to fish "The Driftless," the combination of trout, tenkara, and new-to-me fishing waters, proved just too tempting to pass up.

After a long day of travel on Friday...Jacksonville to Charlotte...Charlotte to Chicago...and finally Chicago to La Crosse, Wisconsin, the doors of the Midwest Tenkara Fest opened shortly before 11AM on Saturday. Saturday also happened to be the Wisconsin Trout Opener, so fishing was on everyone's mind.


The MWTF itself was held in a VFW Hall in Coon Valley, Wisconsin.  Coon Valley is a really small town, basically a main street with all of the necessities; a church, a market, a pizza place, and of course, the ubiquitous Kwik Trip.


The VFW hall sits right next to Coon Valley Veterans Memorial Park, a beautifully maintained public use facility that just so happens to have a trout stream (Coon Creek) run right through it! So the MWTF was no more than 100 yards from the water, making for convenient on stream demos as well as providing constant temptation during the various indoor presentations. 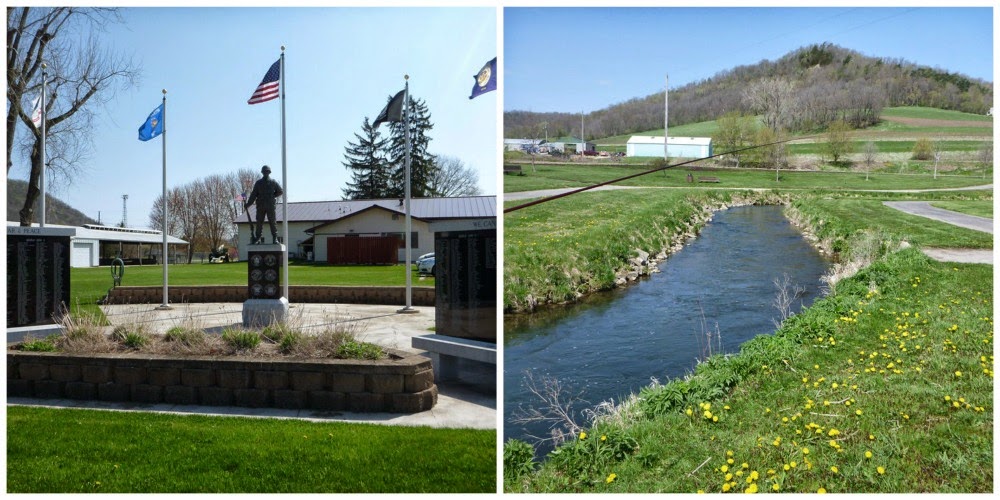 Now this is where I failed you, the readers of this blog. I'll be totally honest, I didn't take a lot of pictures of the MWTF...which is a shame, because if you're a gear nut, this was the perfect place to ogle many different tenkara wares. So in lieu of pictures, here's a quick rundown of the vendors...with some links to what I thought were the notable goodies...

Badger Tenkara - MWTF Hosts, there was also a table with their full line, including prototypes of two new rods, the UNC & Wisco. (Having cast the Wisco, I can tell you it was sweet, I'm going to pick one up to fool around with Florida Largemouth).

Tenkara USA - Manned by Mark Bolson, a nice spread of TUSA rods, accesssories, and literature was present. Mark also was tying flies...and boy is he a talented tyer. Being very familiar with the TUSA product line, I think I spent more time chatting up Mark than fondling the merchandise.

DRAGONtail Tenkara / Moonlit Fly Fishing - Rick Munday was overseeing this offering of rods & lines. I have to say, the DRAGONtail rods might have some of the sharpest cosmetics out there if that matters to you.

TenkaraBum - What's a tenkara event without Chris Stewart? There were far too many rods on his THREE tables of gear to even try and recap all of what Chris brought along. All of the goodies from all of the Japanese brands were present. The Nissin rods were especially nice to browse in person. I mean who doesn't want a Pocket Mini? It was all almost overwhelming...but impressive none the less!

Craig's Keiryu Carnival - OK, Craig Thoreson wasn't selling anything, but he had all of his keiryu gear laid out on a table in the back, and he was eager to talk whomever asked through each piece of equipment. You've never seen a bait box like Craig's bait box.

Streamside Leaders - Michael Moline (& wife Kathy) were also in attendance, with a rainbow of colored leaders, flies for sale, and of course two models of tenkara rod. The 9 foot Streamside rod is definitely a winner. Did you know Streamside has been making tenkara lines longer than tenkara rods have been sold in the United States? I didn't either, until last weekend.

Zimmerbuilt - The bags and packs handmade by Chris Zimmer are ultralight, functional works of art. Having owned a "Guide Sling" for a few years, you really can't gain an appreciation for the quality construction and attention to detail without handling one (or many) in person. Chris was also selling MWTF patches, which I just had to scoop up. Plus he totally hooked me up...just try not to be jealous.

Coulee Region Adventures - Ever think of fishing tenkara from a NuCanoe?  Anthony Larson did, and does, and as a guide and NuCanoe dealer, he was eager to tell you all about this awesome fishing platform.


The MWTF content spanned two days with Saturday and Sunday both filled with a lot of great presentations (and food). Matt Sment of Badger Tenkara sort of served as emcee walking the attendees through the basics of tenkara, both in the classroom and out on the lawn (& creek).

Other presentations were either in person, via Skype, or recorded video.

While all of the presenters (Mike Lutes, Anthony Larson, John Vetterli, Erik Ostrander, etc...) were great, a handful really stood out to me.


Craig Thoreson's keiryu gear & zero tension line overview - While I'm not giving up tenkara any time soon, it was really interesting to see all of the keiyru gear up close. The lines Craig makes were amazing. Imagine using spiderwebs for fishing line...yes, those zero tension lines are that fine.

Rob Worthing (Tenkara Guides) Landing Big Fish - This was a recorded video / power point, but it was extremely thorough, informative, and Rob's delivery as narrator was very entertaining. Don't know the secrets to riding the power curve of your tenkara rod? Rob and the Tenkara Guides can fill you in on that, among many other big fish techniques.

Chris Stewart's Keiryu Tactics for Tenkara - Yeah, I know, more keiryu...but this presentation was more about applying some strategies from one form of fixed line fishing to another. Long rods, short lines, and yes... you can use split shot or weighted flies. It was simply a refreshing counterpoint to many of the tenkara taboos out there today.

Anthony Naples' Small Stream Tenkara Movie - Yep, I called it a movie. At maybe 50 minutes long, it was a very, very, very comprehensive overview on how to fish small, tight water effectively. Plus a little birdy told me that bits and pieces may make it online, so keep an eye out, it's well worth it!

(Oh, and Anthony, if you're reading this, Craig & I predicted successfully that at least some portion would be filmed in black & white...but we were both disappointed by no linocut animations).

And I can't forget the fly tying!!!  - Dale Hewitt, Mark Bolson, and Matt Shipp each spent some time at the vise. I was most interested in Dale's presentation on local Wisconsin fly patterns such as the Pink Squirrel (and pink squirrel kebari variant), it was also really neat watching Matt tie kebari in-hand. As a guy who personally struggles with a vise, I admire his dexterity.

While the schedule was jam-packed with presentations, there was a lot of time provided to fish the Coon Creek as well as meet & chit-chat with other attendees, which quite honestly is my favorite part of these events. Whether it's simply first time introductions, or renewing friendships made at prior events, getting to better know people you've become acquainted through tenkara on social media is a great opportunity that I look forward to each year.


Looking back on the experience, I thought the Midwest Tenkara Fest was a very informative and enjoyable event. It was extremely well run by the folks at Badger Tenkara (Matt, Mike, and Nicole) and I'd recommend considering attending next year's event to anyone that is ten-curious, lives in the midwest, or like me, simply needs an excuse to get out and fish the beautiful spring-fed streams of the Driftless.

And speaking of fishing...oh, I did some of that too. More on that, and this guy, tomorrow...