It's been a few years since I've seen my old Pennsylvania fishing buddy Spurky. We had been loosely planning a reunion for a little while, and we were finally able to coordinate schedules and meet up a few weekends ago at Deep Creek Campground in Great Smoky Mountains National Park.

I had spend a few days at Deep Creek a few weeks before, as it hosted TenkaraCamp, a get together of tenkara anglers for a long weekend of fishing, clinics, and good times. It was helpful to set the stage for the trip with Spurky, as I was able to get the lay of the land (& streams), scout a good campsite, and feel positive that we'd have a good time.

It was really good to see Spurky again. (And not just because he was wearing a T! Party t-shirt). We were both a bit older and grayer, but the man still has a passion for fishing, so I was happy to play somewhat of host and guide and find some waters that fit his style of spinner and spoon fishing.

Not arriving at camp until after 4PM, it didn't leave a ton of time for fishing. So after pitching my tent, Spurky & I headed down the trail to go fish a few spots that I recalled looked promising. We didn't hike in too far, but we each found some pretty water and some really nice fish, including a solid brown I pulled from a riffle with the Tenkara USA Sato. 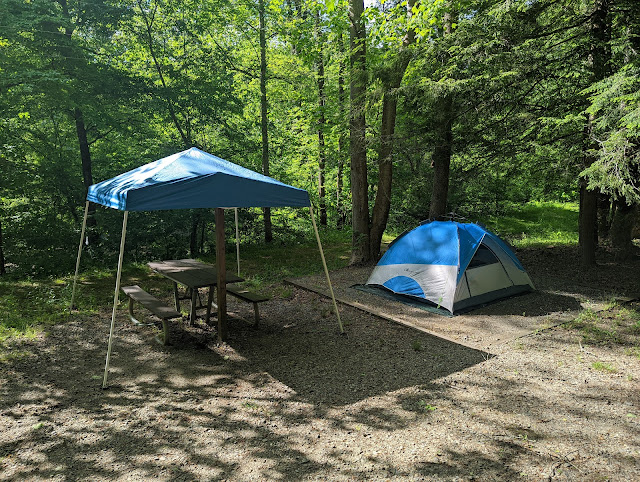 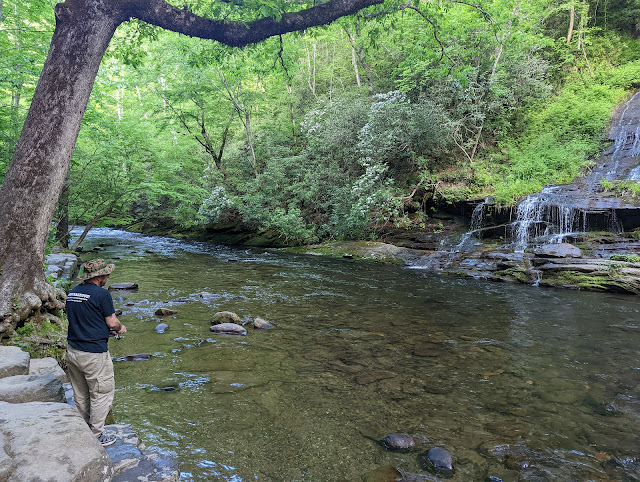 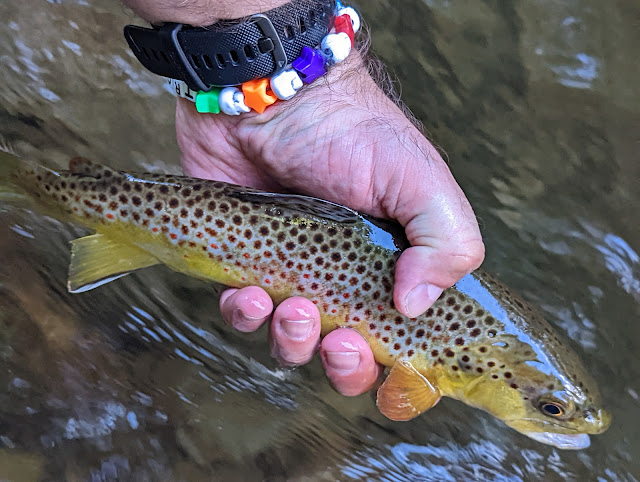 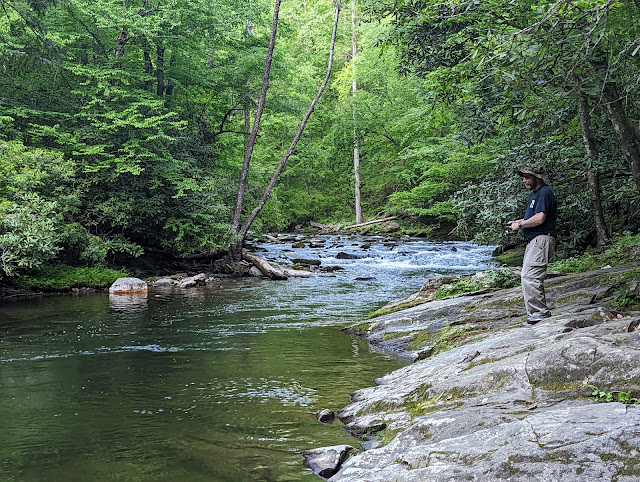 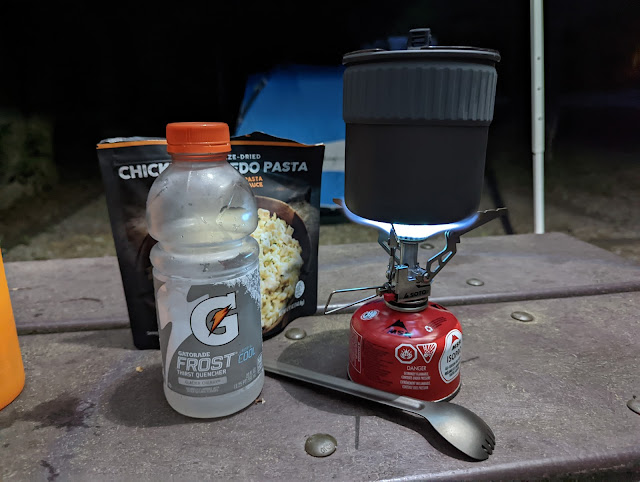 Friday was supposed to bring a little weather, but we lucked out and it was relatively sunny and gorgeous the whole day. We hopped in the car and drove over to Cherokee to fish on this morning. I wanted to take Spurky to a stream that I enjoy visiting, as it has a good mix of broken up pocket water for me to fish with my tenkara rod, while also being easily accessible off the trail and several deep, slow pools for him.

We spent a good part of the morning and early afternoon exploring the waterway, with us both having some luck with the resident rainbows. I found myself having a great time as they were eager to hit up top, so switching over futsu kebari as well as more familiar dry fly patterns seemed to do the trick. 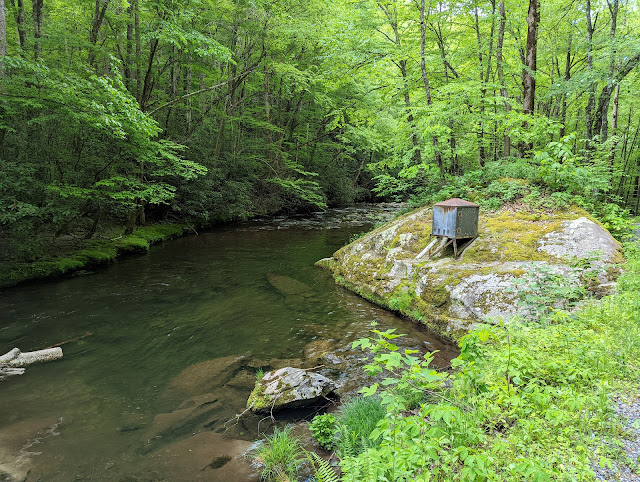 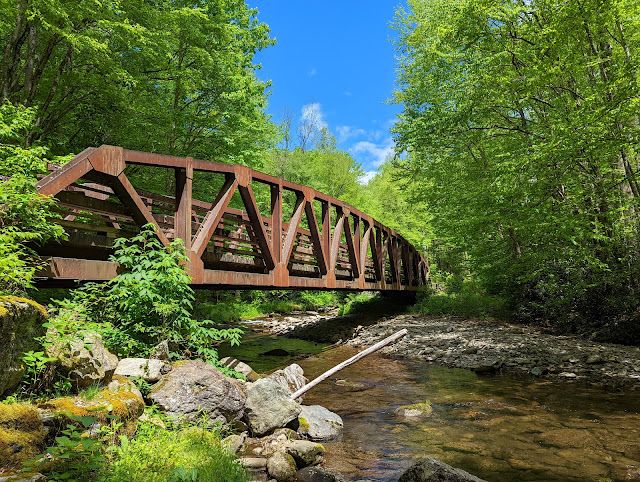 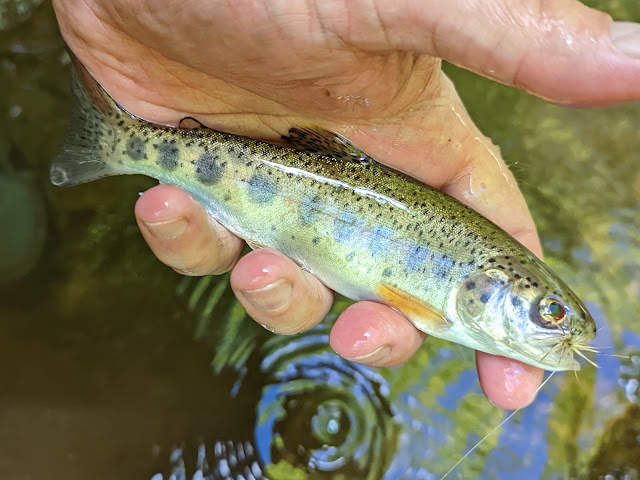 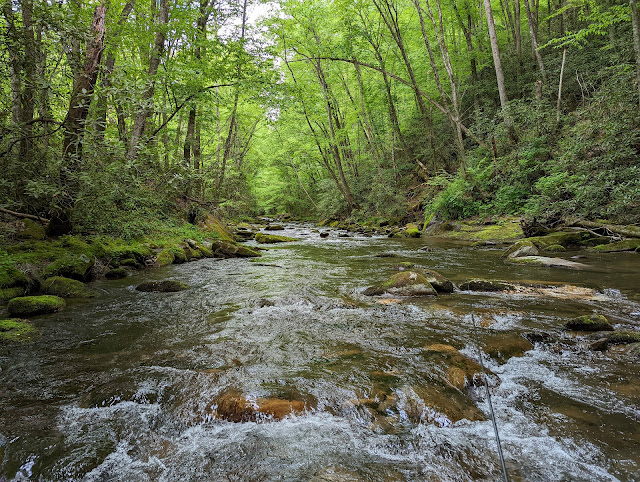 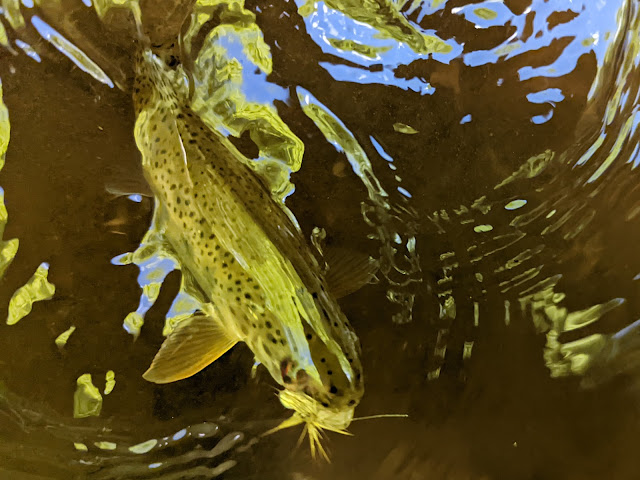 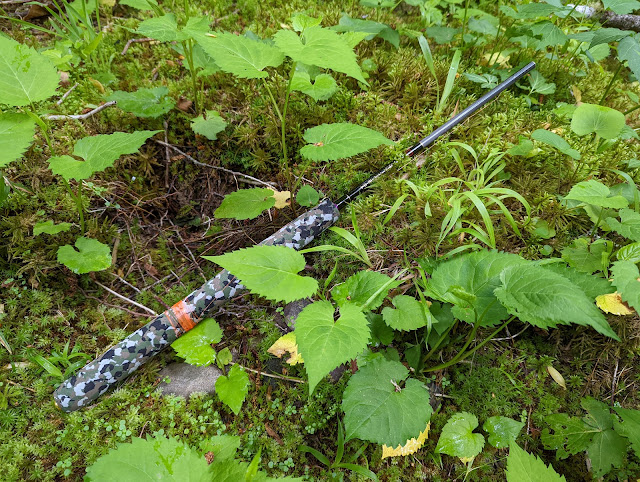 Toward the end of the day we returned to Deep Creek and fished a bit more locally. Feeling the itch, I shelved the Oni Type III tenkara rod I was using earlier in the day and switched to my Orvis Superfine 3-weight fly rod just to get a few casts in. I caught a few small rainbows while Spurky ended up catching a really nice brown beside one of the bridges with spinners. 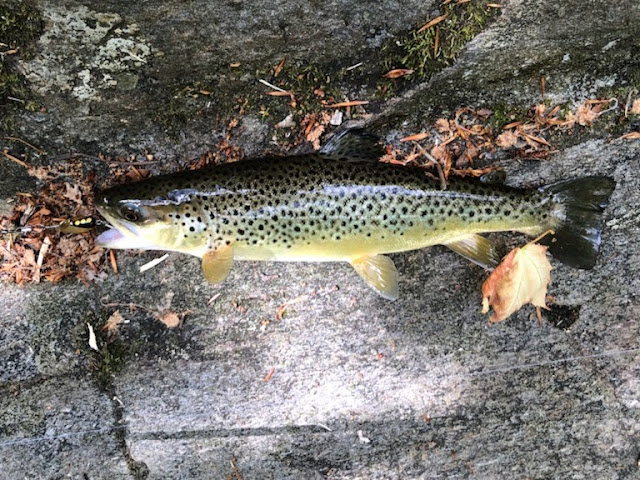 Before we turned in for the night, I did a little waterfall chasing (there are 3 somewhat close to the trailhead in camp), and I wanted to check each of them out. 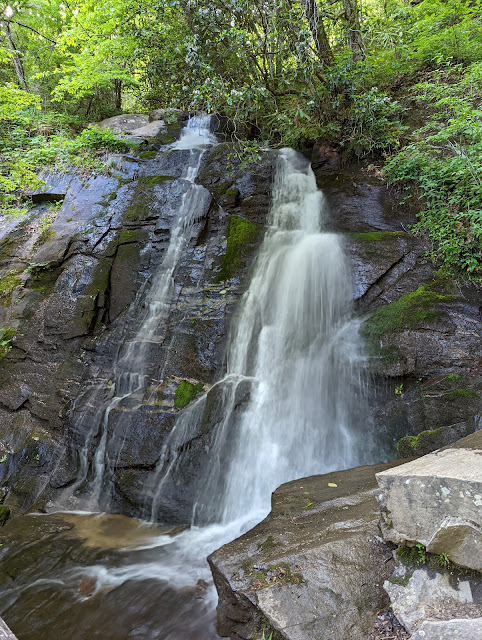 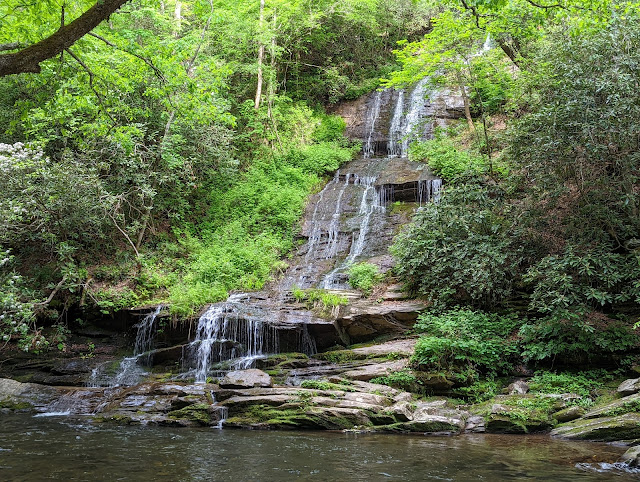 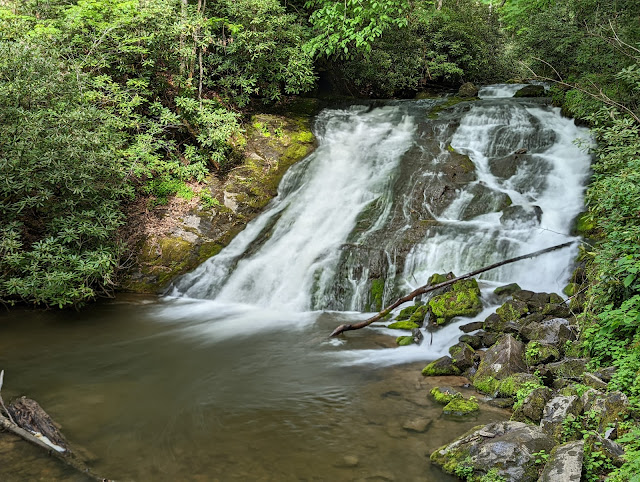 Saturday, our last day to fish, was perhaps a bit bittersweet. Spurky was feeling quite a bit under the weather and not totally up for much of anything, much less fishing. So after checking in on him, he told me to go out alone. I visited another favorite stream not that far away and found the fishing to be good. Unfortunately, the weather turned around lunchtime, chasing me off the water. 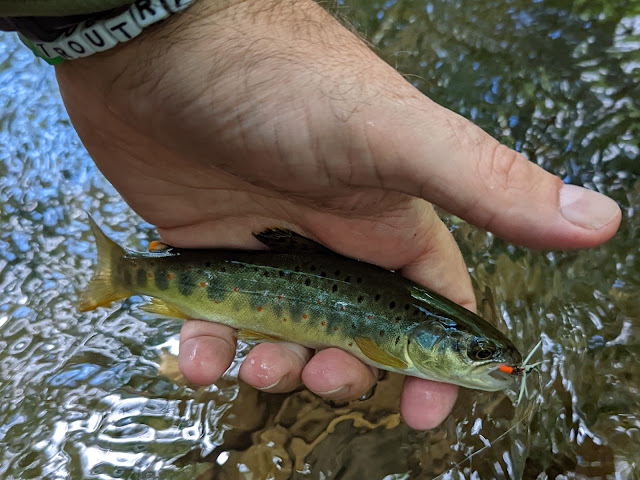 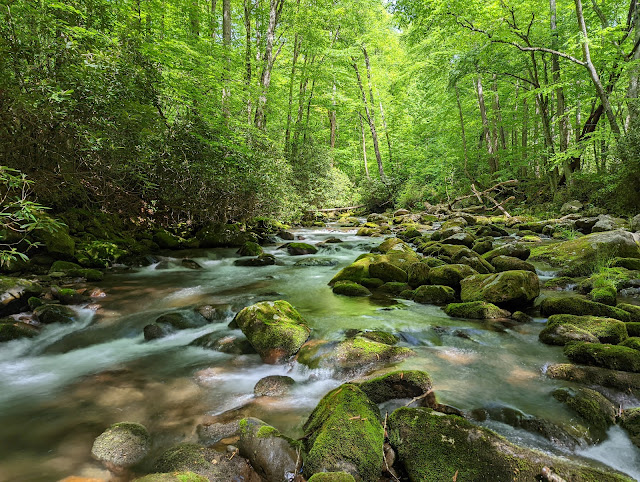 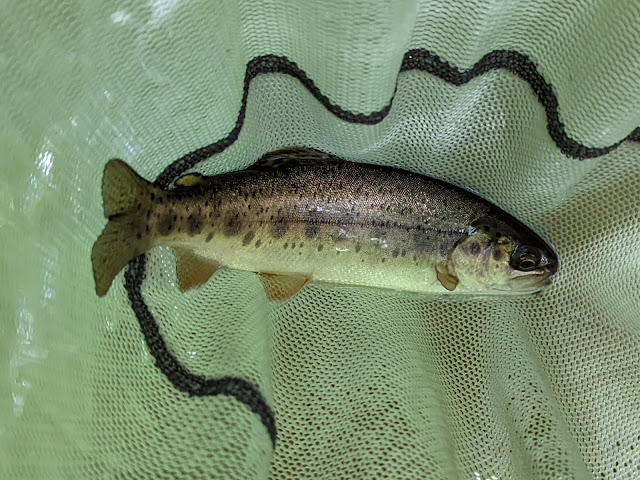 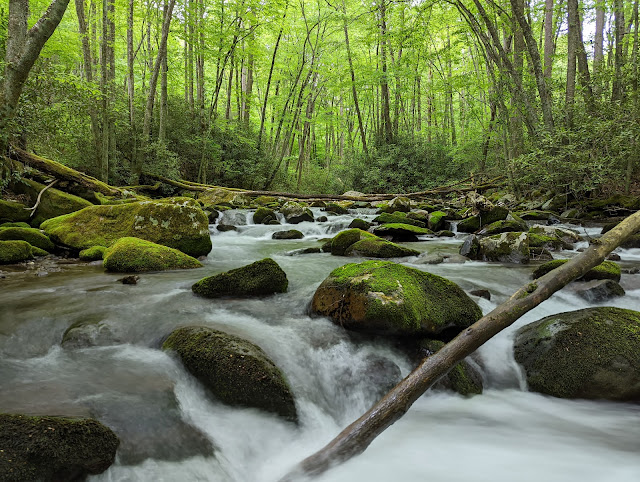 Returning to camp and finding not only much nicer weather, but Spurky in better spirits, I followed him down to Deep Creek and just watched him for a little bit and snapped some photos. A bit of decompression for myself after a busy past few days. 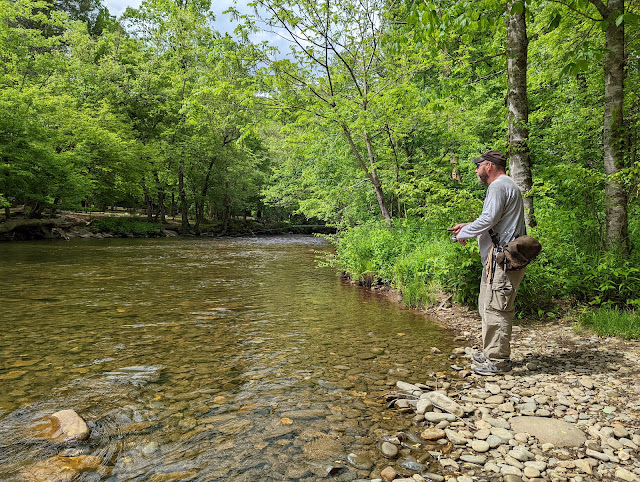 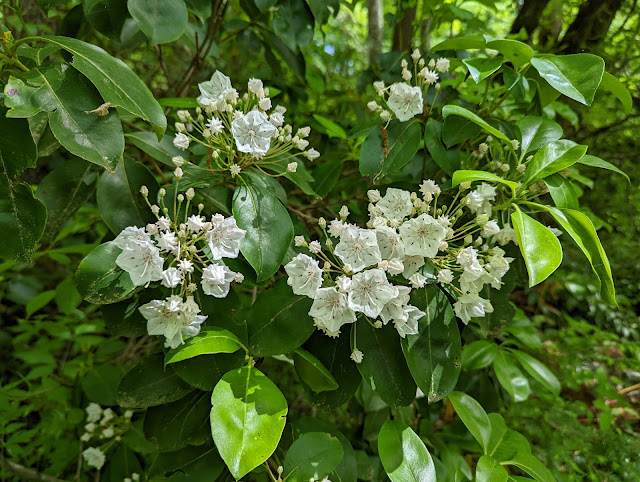 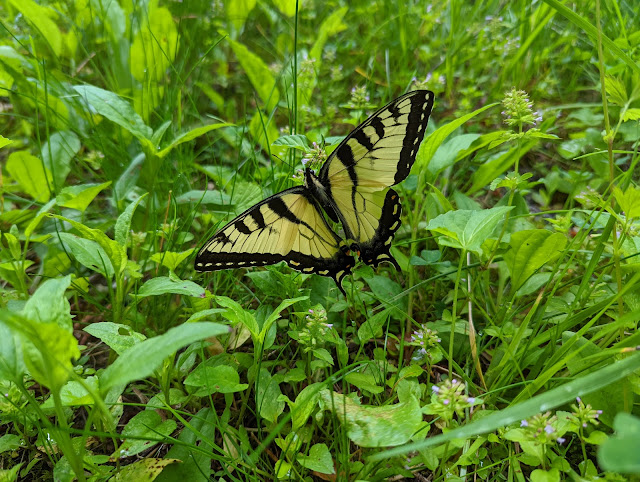 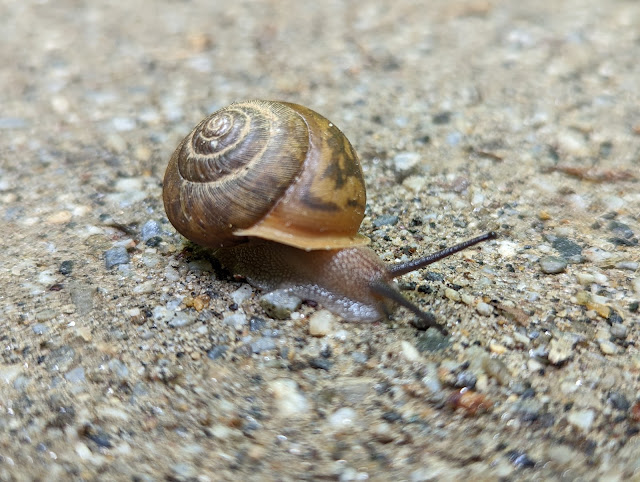 Sunday was departure day, and the end of our weekend of fishing. We both had long drives ahead of us, so the camps were packed up and vehicles headed in separate directions before you knew it. It was certainly nice to see Spurky again. I hope despite that last day hiccup, he'll look back on the trip fondly. I mean what else can you ask for? We found good fishing, stellar conversation, and beautiful scenery. The Great Smoky Mountains certainly do not disappoint!

I also wrote a bit more about our trip from a slightly different perspective over at Tenkara Angler. That article was far less about the fishing, and more about just slowing one's pace to take in all that a fishing trip has to offer.

Posted by Michael Agneta at 1:38 PM