It's nice to be able to find time to blog again. I've been mostly consumed by work since the holidays... NFL Playoffs and the like kept me busy at all hours of the day. And when I wasn't working, I was dedicating a little time to the Tenkara Angler website, so good old T! went a little neglected.
Well, it doesn't mean fishing hasn't been on the mind. I'm super stir crazy right now and really need a day or two in the woods in the worst way. I might even head up to North Georgia next weekend to get a little trout fishing in... we'll see.
But today I wanted to pop out a quick post to highlight something I received in the mail this past Friday. Its a lovely little river driftwood fly display from my friend Dennis who writes over at the Tenkara Path blog, as well as has a shop on Etsy. 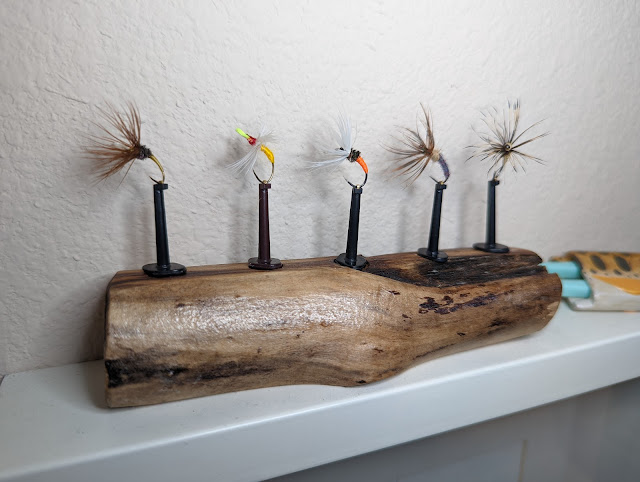 There's nothing particularly fancy about it, and that's kind of the point. It's beautiful in its simplicity and will provide a source of inspiration at my tying bench. I thought it might be nice to display flies that were received in fly swaps or similar. For example, the second fly from the left was tied by Eiji Yamakawa, a friend who lives in Japan.
In any event, if you're interested in this sort of thing, check out the Tenkara Path shop on Etsy. Dennis is quite the wood worker and in addition to these displays, also sells tenkara line spools, thread bobbins, and lines. Even if you're not into tenkara, Etsy is always a fun place to show around "fly fishing" gear and accessories.
Posted by Michael Agneta at 12:25 PM