Do you ever dream about fishing?
I don't mean daydream or to have aspiration. I mean actually dream, like while sleeping. I very rarely do, or at least that I can recall. I don't remember many of my dreams in the first place.
On this past Friday night I did dream about fishing, and when I woke up the events stuck to my conscious mind. It was a weird dream, but one I'd like to jot down, if only to document that it (and what followed) actually happened.
The scene is in a dark woods, perhaps at around dusk. It was definitely low light, almost like a tunnel of thick trees where the only light making it in was from a small break in the distance, creating a lot of shadows.
I might have been there with somebody, I don't recall, but as I progressed down the path I eventually approached a stream. One you could tell was there from the sound of moving water, but remained just out of sight due to its lower elevation when compared to the bank. Standing a good distance away to make my cast and not to spook any fish that could sight me, I tossed a blind cast into the void.
A count of one or two passed and the line went tight with violent pressure. Feeling a solid hookup and deep bend of my rod, I approached the water's edge. When the stream finally came into view, it was flooded with nothing but the white bellies of small, dead fish. The eddy was full of what looked like a massive fish kill... maybe brook trout, I'm not sure, but my line was dancing; weaving its way through the bodies.
Once the shock passed, I brushed aside the dead fish with the back of my right hand to free my line from impediment and began to hand line (I was guess I was fishing tenkara) in the mystery fish at its terminal end. As it rose from the dark a thick body of vibrant bronze that was lightly spotted came into view.
I reached down and held the fish in my hand. It was some sort of trout, but not a species I'd ever caught before. It was a large one, perhaps 16 or 18 so inches, with a width spanning the length of my fingertip to wrist. Hook plucked from its jaws, a quick flick of its tail sent it back into the depths.
And then it was over. At least the dream was.
Or so I thought.
See, on Saturday I was reading some blogs in my blogroll to see what some of my favorite anglers were up to. Then I saw it... over on Ben Smith's blog. 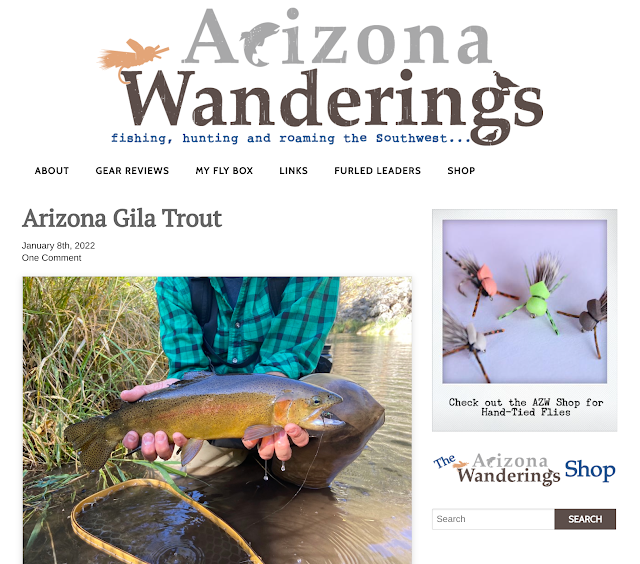 That was the fish, albeit in much sunnier environs. I was tempted to comment about my dream on the post, but instead just left some sort of generic "beautiful fish" comment. But a day or so later I'm still irked by this circumstance, hence the impetus to write today's post.
Not previously self-challenged to make sense of my dreams, I'm not sure what it means. Coincidence? Foreshadowing? Are Gila trout in my future? What about the dark woods and all the dead brookies?
All I do know is it was indeed a very weird dream...
Posted by Michael Agneta at 6:00 AM