A few weekends ago I met up with a few of my East Coast fixed line fishing friends for a little getaway in the hills of Western North Carolina. This escape had been planned for quite some time, and in the days leading up to the rendezvous, the chatter in our text messaging group was indicating that everyone was very excited.
I was too. Fishing with friends on "new-to-me" water... with nights in frankly an upscale cabin (with its own trout stream in the backyard)... it doesn't get much better than this. 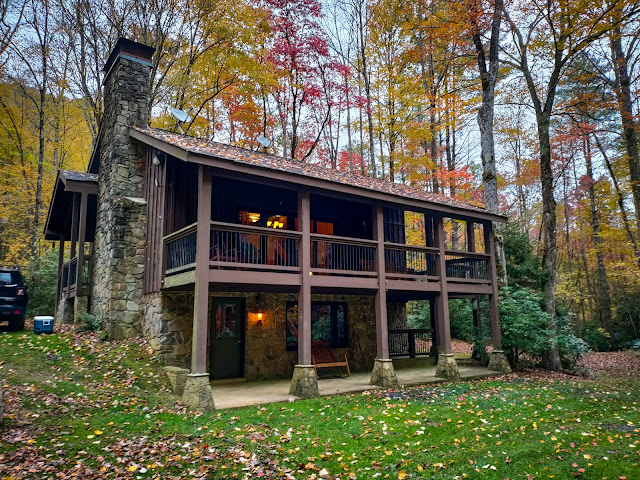 Well, it could have been slightly better if the weather decided to cooperate. Arriving on Thursday and leaving on Sunday, I'd personally have two and a half days of fishing. And Mother Nature decided to make just those two and half days mostly chilly and wet in the form of a steady, constant, overcast drizzle. But this was definitely not a big deal, this was going to be excellent, wet or dry.
Thursday
Arriving Thursday afternoon a little bit before most, the afternoon was mostly spent unloading my (and others') stuff into the cabin. That said, a few of us decided to test that backyard creek out for a short spell and found pool after pool of welcoming rainbow trout. 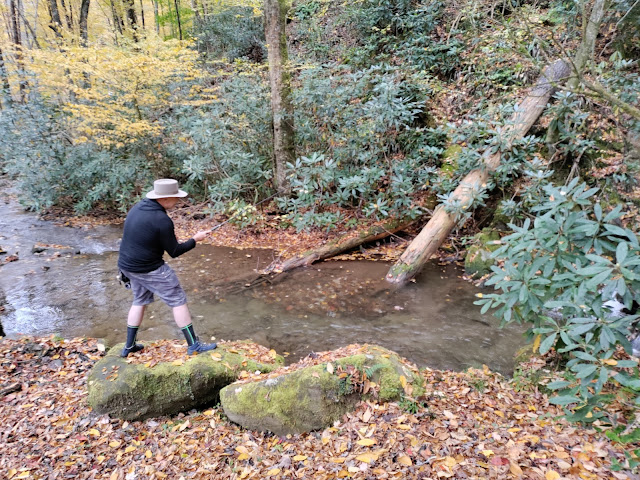 It was a great way to immediately shed the skunk from the weekend, as well as spend a little time with the DRAGONtail FoxFIRE fiberglass tenkara rod in just the environment it was designed for. 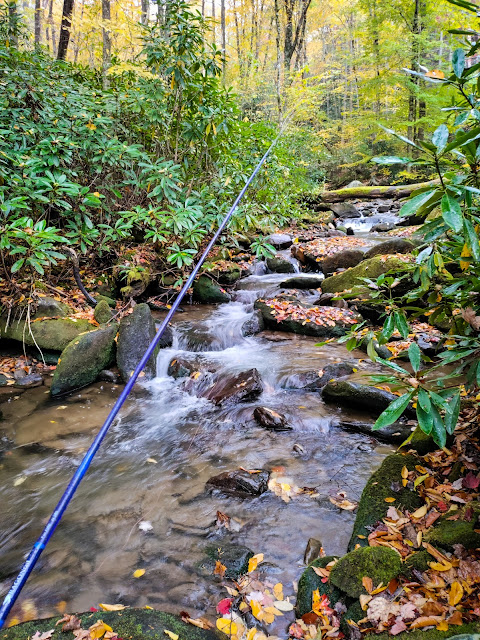 Friday
On Friday our group of nine divided and spent the majority of the late morning and early afternoon on nearby beats of the larger namesake water we all came to fish... while yet another smaller subset split up and drove to a different waterway to try and find some larger fish. 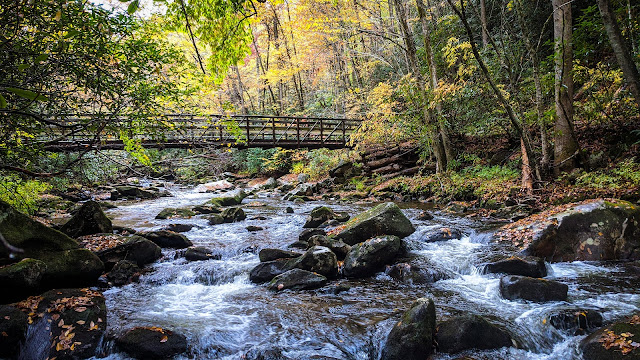 I'm happy to report that the outing was pretty fun, even though for whatever the reason I was finding myself catching a stray tree branch seemingly every other cast. Mentally, I was telling myself I needed to adjust my casting plane more horizontally, but my body just refused to do it. Too much unencumbered Wisconsin & Colorado vertical casting muscle memory I guess...
It didn't matter, my companion on the stream that morning (Bryan) is the perfect kind of easy-going fishing partner I enjoy fishing with. 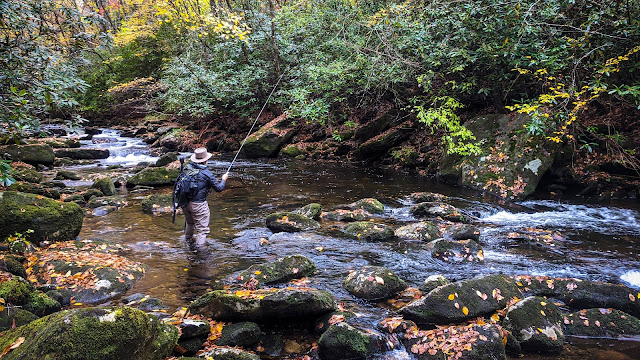 First, he's incredibly skilled and personally had a fantastic morning vacuuming up fish with a leech jig pattern. Second, he just let me be as I fumbled around on the water, giving encouragement (and many prime spots) to work out my issues. Lots of smiles and laughs, and no ribbing until after we bushwhacked through the rhododendron thicket, found the trail, and were finally off the water. 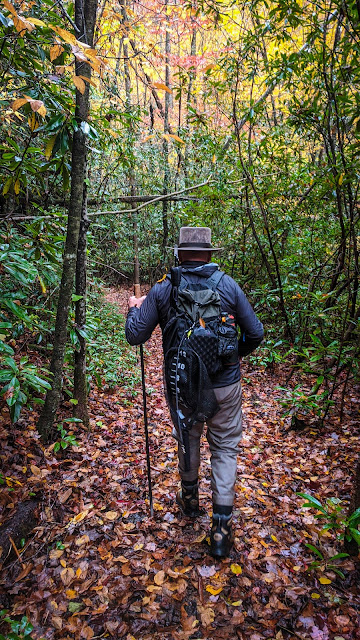 As clumsy as my morning was, I eventually settled down and caught a brookie-brown-rainbow slam in the afternoon to round off the day's haul, which was sweet... even if the brookie appeared to have been stocked. 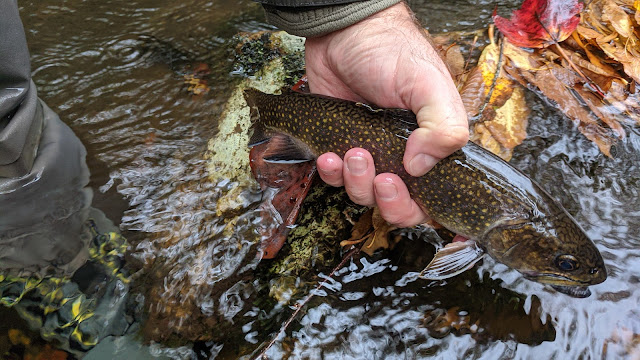 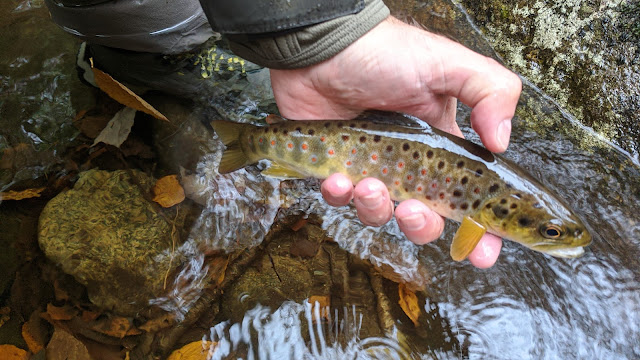 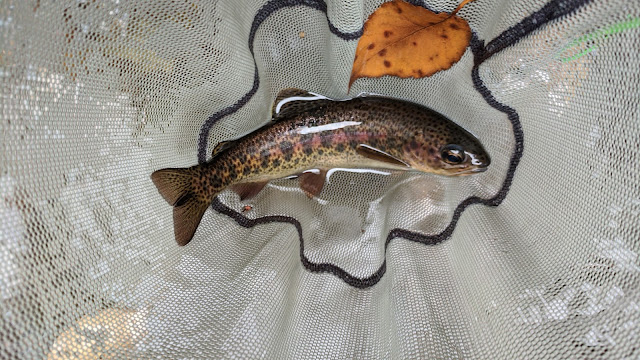 Made me feel good when everyone reconvened at the cabin for an evening of dinner, fly tying, scheming, and bullshitting. I don't really fish for "numbers", but it seemed as if Bryan & I collectively made out the best of the group.
Saturday
Saturday was rainy and cold from the jump. You knew you were going to be wet all day, you just had to prepare yourself and dress appropriately. On this day my fishing partners were Anthony & Jay. However, once we got to the water and geared up, Jay decided to take a right turn when Anthony and I went left. I respect that, some days you just want to fish alone. 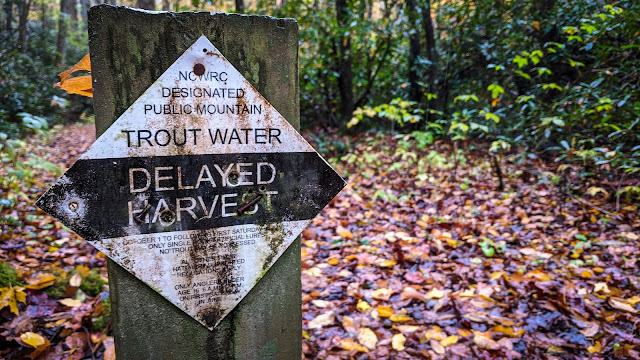 This day was really interesting to me. Anthony decided to Euronymph with his new custom fly rod, while I got to test drive a new and unreleased tenkara rod, the Tanuki Shinobi.
I had never watched anybody fish with Euronymphing gear before in person, so it was fascinating to see how Anthony approached each section of water and the benefits his rig provided over a shorter, more standard length rod and reel outfit. It was in many ways similar, yet still much different than what I was doing with the tenkara rod. 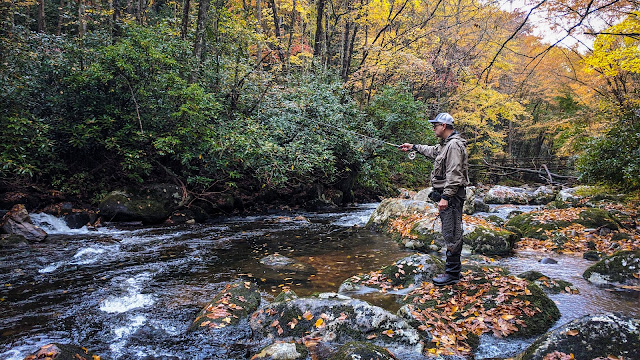 Fortunately, my body caught up to my brain on this day and I stayed out of the trees and bushes. 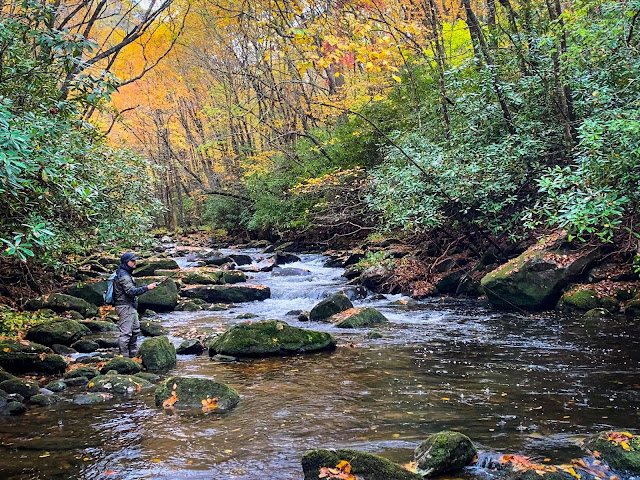 The Shinobi is a really interesting rod visually, with an integrated (and tattooed) grip section. It's a 13 foot rod that casts as beautifully as it's constructed, regardless of whether the kebari on the end of the line was weighted or not. 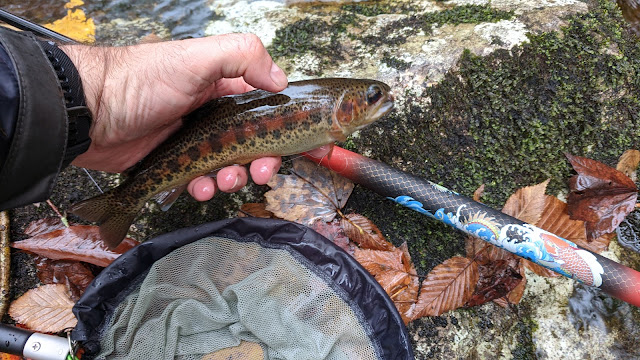 I mostly fished a peacock-bodied kebari with a 2.5 tungsten bead that I tied inspired by the "honryu" pattern in Discover Tenkara's Complete Kebari Collection tutorial. 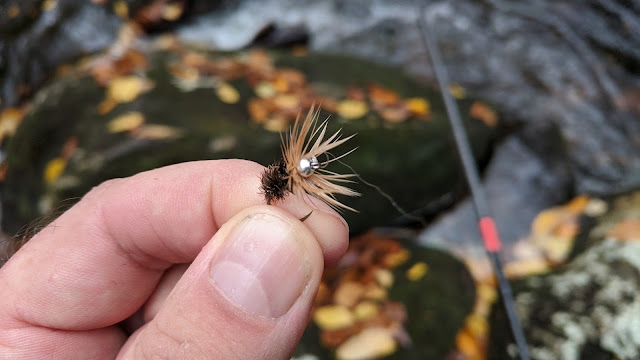 Due to the overnight rains, the water was much higher and faster than the prior day, and catching was slightly more difficult. I managed four rainbows, and I think Anthony caught one or two. Not epic, but entertaining nonetheless. Wet and cold, we jointly decided to cut the session a bit short and backtrack to find Jay and head back to the cabin.
While Friday with Bryan was more about fishing, Saturday with Anthony was more about testing new things and conversation. I'm definitely intrigued by the Euronymph rig and spent quite a bit of time on the water chatting with Anthony about a wide array of topics ranging from fly fishing to flipping houses.
Thursday night at the cabin was a bit of a blur. The World Series was on TV, we ate brats and venison, drank beer, and chatted by the campfire for a bit. I eventually caught a chill I just couldn't shake, so I searched for the warmth of bed and decided to turn in a little early. This lack of temperature tolerance shows this Pennsylvanian has definitely become a "Floridian." 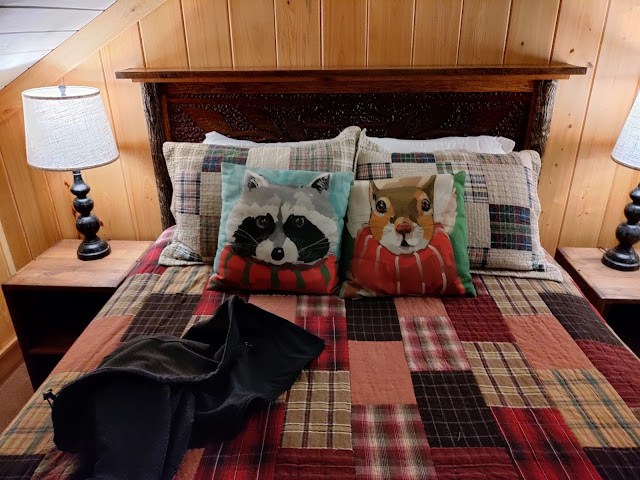 Sunday
Departure day. We left the cabin and mostly went our separate ways. A few guys stayed behind and fished, and from what I hear found wonderful weather and solid numbers of trout. Me? I stopped at the supermarket on the way out of town, stocked up yet again on Cheerwine, (it's a thing I do in North Carolina, see my prior post), and headed home.
I really enjoy fishing with this diverse group of anglers. I can't wait until we get together again. Maybe it will be a bit sunnier and warmer the next time, but even if it isn't, I know a great time is certain to be had.
Posted by Michael Agneta at 6:00 AM