So what's been keeping you busy?

I haven't blogged in a little over a week, mostly because work has kept me pretty busy, (I can't believe I'm going to say I can't wait to go back to the office... whenever that is). Over the weekends I've been dedicating my "computer time" to putting together the next issue of Tenkara Angler magazine... so it's kept me away from these familiar confines.

I'm still putting some finishing touches on the magazine, so the next issue probably won't release it until Monday the 13th, but here's a sneak peek of the cover, for those of you who have interest in that sort of thing. 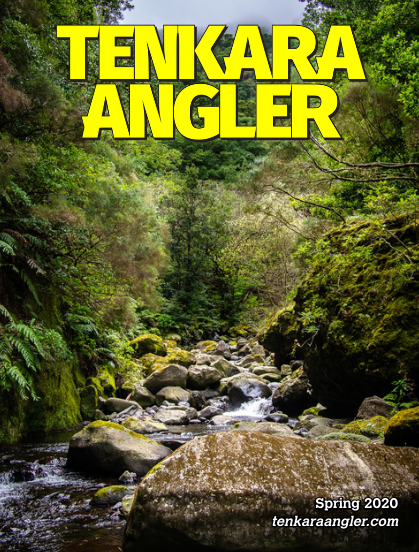 The cover photo (like many others in the issue) was submitted by Joao Mota, who interestingly enough is a fly fisherman & tenkara angler who lives in Madeira Island, Portugal. In doing some research, turns out this absolutely beautiful place has a rainbow trout stocking program... of which wild populations have taken root. Who knew? I certainly didn't.

I did a little more research, (I find stuff like this fascinating) and found a few of these articles and videos floating around out there on the subject. Even found a video with Joao in it (the first embed below...)

One of my tenkara buddies mentioned he actually had the opportunity to fish Madeira Island as well while he was visiting on a business trip a few years ago. Talk about a small world! Appears he used the same guide service as above, so there's even video proof - how did I miss this?