Look at this f'n pig of a bluegill. I had to alter the background so people wouldn't figure out where my honey hole is located. 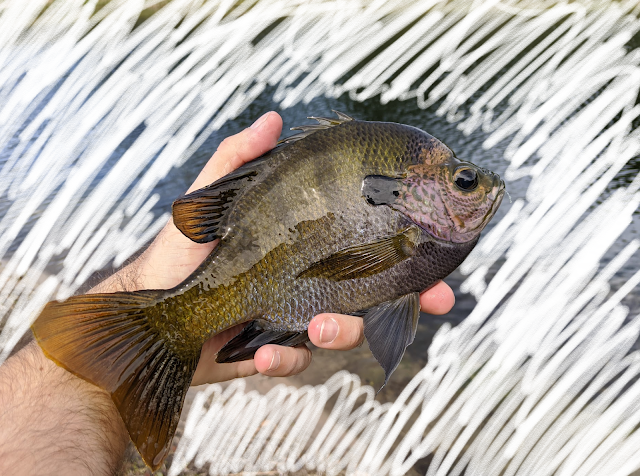 Actually, that's a joke. It cracks me up when people do that online. I get it (maybe) if you're fishing a fragile native brook trout stream where a little bit of pressure could be negative for the health of the resource... but when people do it while hoisting mutant hatchery trout out of the water, it's dumb. They probably just followed the stocking truck anyway. But I digress...

I did get out on the water for the first time in 2020 yesterday (hooray)! Kept it local and hit some of the retention ponds at the neighborhood ball field. One pond was a dud, the other was pretty good.

I walked to the park toting a Cabela's CGR fiberglass rod in hand. Wasn't going to be a fixed line/tenkara day, as I wanted to fish streamers and stripping line is more fun than twitching it. 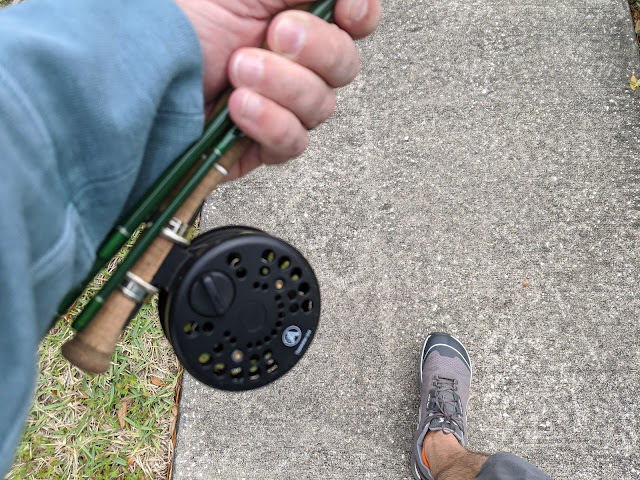 Yes, it's shorts weather down here. Sorry. Not really.

Pond #1... the one with the obnoxious fountain in the middle. This isn't a great photo of it, but you kind of get the point. 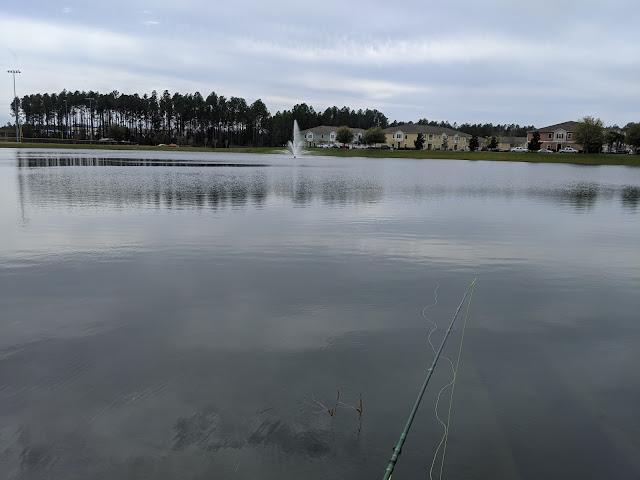 This pond used to be really good, but now it sort of sucks. It used to be more wooded around the perimeter, with more structure near the banks, but they drained it two years ago in the name of development, made it a ton deeper, and largely barren. Maybe the fish hang out at the fountain in the middle soaking in some oxygenation, because they're not anywhere near the banks anymore. It's a shame, it used to be good for some largemouth bass. Peace out. 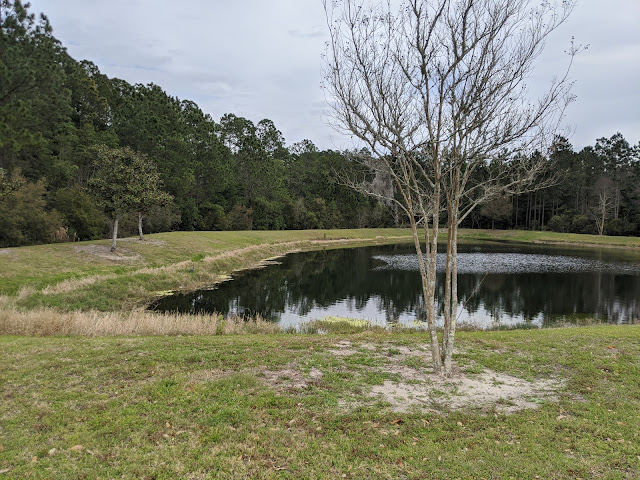 I fish here a lot. There are lots of bluegill in this pond, and occasionally some healthy bass. Some of the largest bass I've caught in Florida came from this unassuming piece of water. This is also where I get harassed by the PETA lady who wants to know why I enjoy torturing animals. She didn't show up today. If she did, I would have faked a coughing fit, sneezed on my hand, and tried to touch her face.

Anyway, it didn't take long to get into fish here. Lots of bluegill and a random dink bass or two. Bluegill are honestly more fun to catch on a tenkara rod as the thing flexes like crazy and it feels like you have a big fish on even when you don't. The 4-weight fiberglass fly rod bent fairly often, but it just wasn't the same feeling. Maybe a 2 or 3 weight would have been more appropriate.

Like I said I caught more than a few... 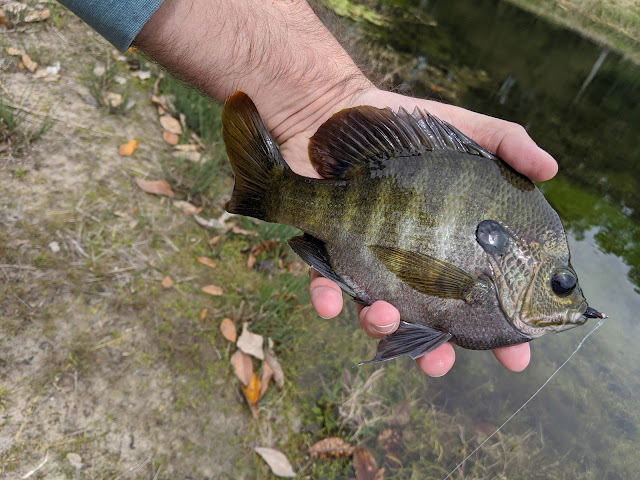 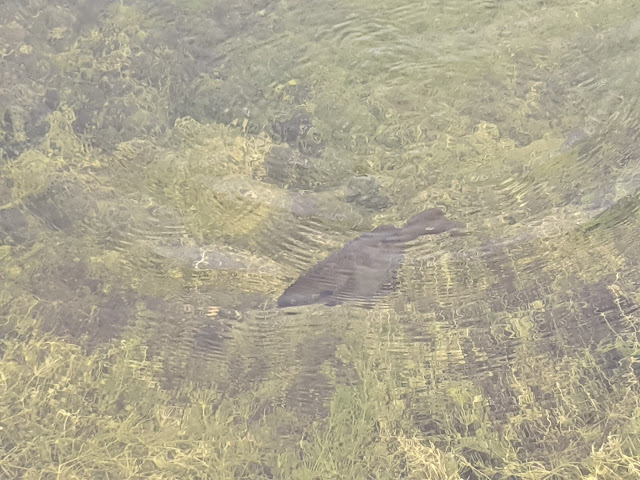 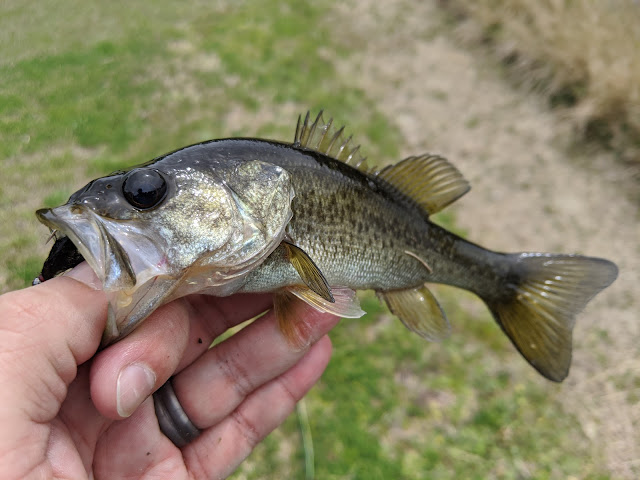 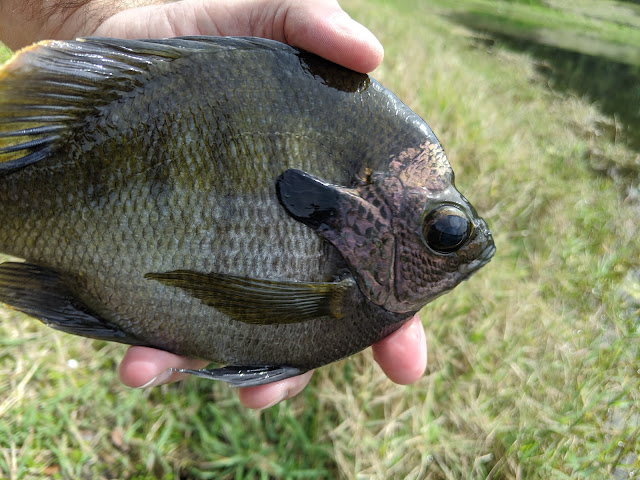 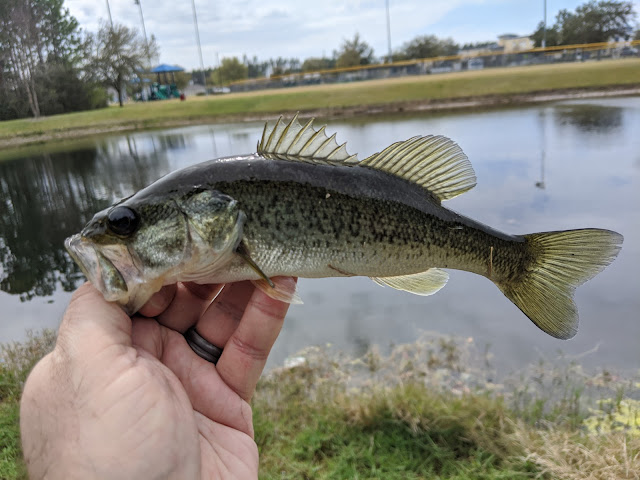 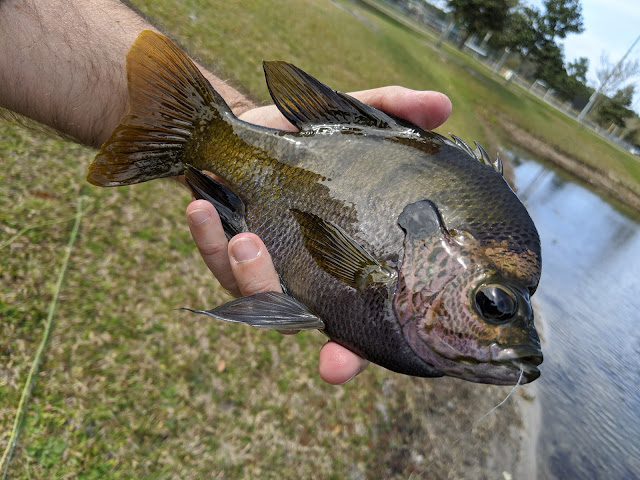 Bluegill aren't particularly challenging to catch, so I changed up my flies a bit to create a some variety. First a black leech, then a foam popper, might have even tossed some beadhead nymphs out there. It was one of those things where it was fun... until it wasn't anymore.

Once that happened, I broke the rod down, packed it up, and walked back to the house. A good first day of fishing for me, although it was neither adventurous or strenuous. It definitely scratched the itch and got the skunk off of 2020 in a satisfactory way.