Finally Coming Around On Yarn... Maybe

A week or so ago, thought I'd tie a few bugs with yarn. It's not a material I really use, although killer bugs (& their variants) are kinda omnipresent in the tenkara scene. There's even a specific yarn (Jamieson's Shetland Spindrift) that thanks to the Tenkara Guides has developed a bit of a cult following. At minimum, I'd eventually try my hand at replicating the Coulee Killers I currently buy from Anthony Naples. They're my go-to fly for deep water.

Anyway, first I needed to get a hold of some. My wife is crafty, but more with fabric than yarn. And I didn't want to go buy a bunch of skeins or whatever they're called, because what if I didn't care for tying with it? Then I've dropped a paycheck on yarn and got balls of it everywhere... and I don't have cats or anything... because they are moody, anti-social creatures... and I've already got a teenager in the house... but I digress...

So I ordered up a little sampler pack from DRAGONtail. It came yesterday, and once unpacked on top of a strategically placed magazine, looked like this: 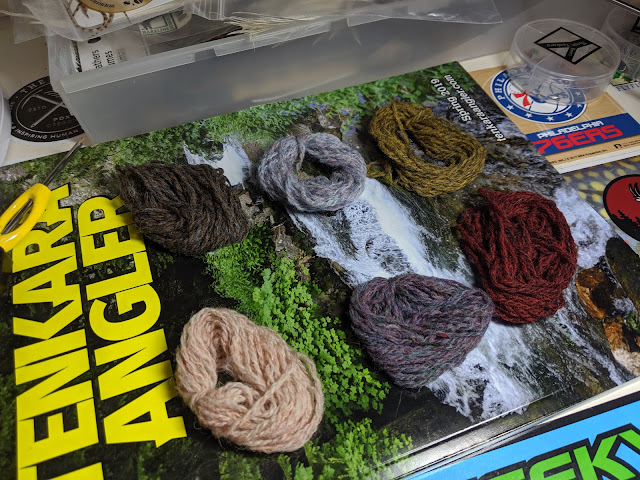 So I tied up a few bugs. They came out, well, as people usually say when they don't want to tell you how crappy your flies look... "the fish won't care"... "those will catch 'em"... Meh, that's just about how I feel about these. Two of the three are definitely too skinny. 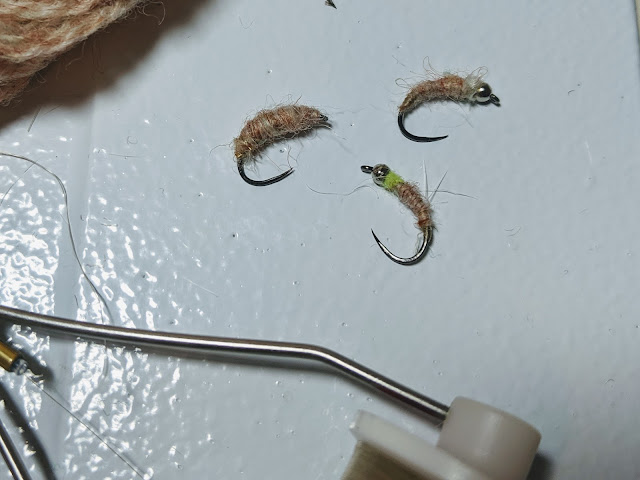 In the upcoming days I'll dig around the interwebz and try to find a few recipes to work with. Maybe the Red Ass Monkey, or some of the patterns Tom Davis wrote about in the Spring 2016 issue of Tenkara Angler. Jason Klass also has a bunch listed at Tenkara Talk... so there's certainly no shortage of inspiration to be had.

Anyway, just thought this might be a good way to break the silence on the blog. Should I tie anything worth sharing, maybe I'll post 'em here. We'll see...