Stompin' Around The Park 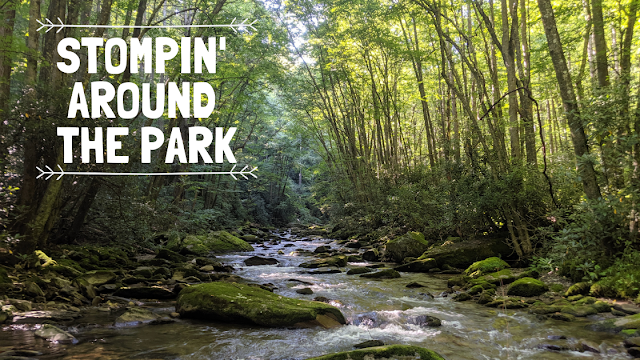 Seven hours in the car can be a long time. But it's time well spent if you have something to look forward to.

With K.C. & Lilly choosing to go do Walt Disney World for the weekend, and me opting to stand pat on my stance to not visit the mouse in the summer heat (remember, we live two hours away, so we go frequently, and it's not a big deal), I was looking at a "bachelor" weekend. Not keen on staying put in Jacksonville, I packed up the car and headed north to the mountains, where it was at least ten degrees cooler and home to some trout.

Making the time pass on such a long drive can be a difficult chore. I had already listened to most of the regular podcasts in my queue over the course of the work week, so an audiobook kept me locked in and time moving at least a little faster. The Big Sky by A.B. Guthrie Jr. transported me West, even though geographically, I was pointing North. Yes, I've still got that case of wanderlust.

Arriving at my accommodations around 11 PM, it was time to get some sleep. I was intending on an early morning.

The alarm on my phone went off far too soon, but the sun was coming up and I was eager to get on the water. I hopped in the car and headed over to a favorite stream on the North Carolina side of Great Smoky Mountains National Park.

One might have called it chilly that morning. It probably wasn't, but coming from Florida, your internal thermometer can be a bit "off." Donning a light jacket, I descended down into the shade of the stream. The water looked great, moving swiftly, but not too fast nor high to be problematic. 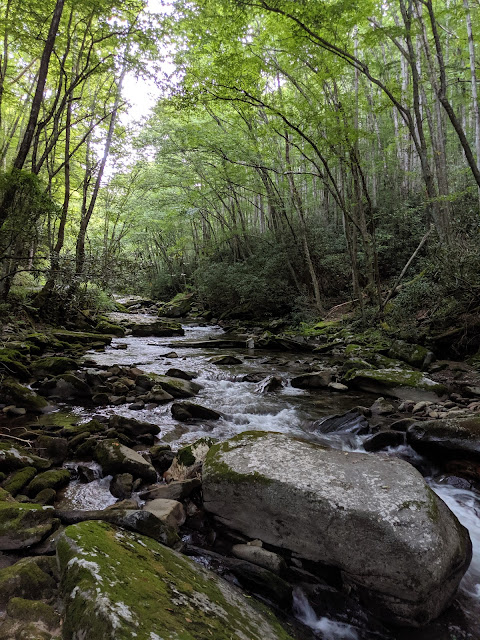 It only took a few casts to find one of its residents. 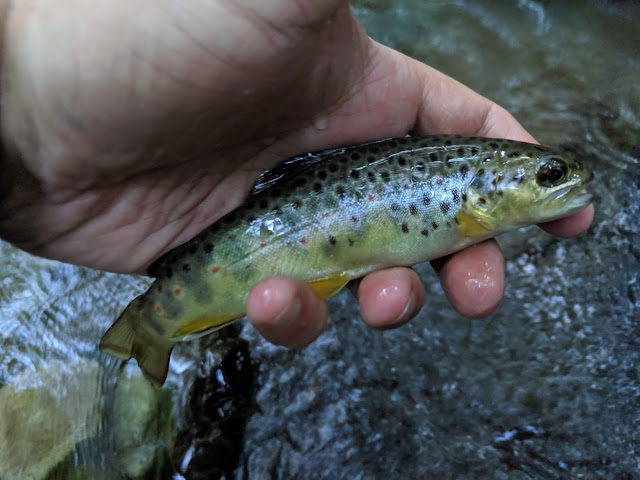 This continued on repeat for several hours. Plunge pool after pocket after calm run. There were so many areas that were the likely home of a brown, rainbow, or brook trout, although I only found two of the three species. 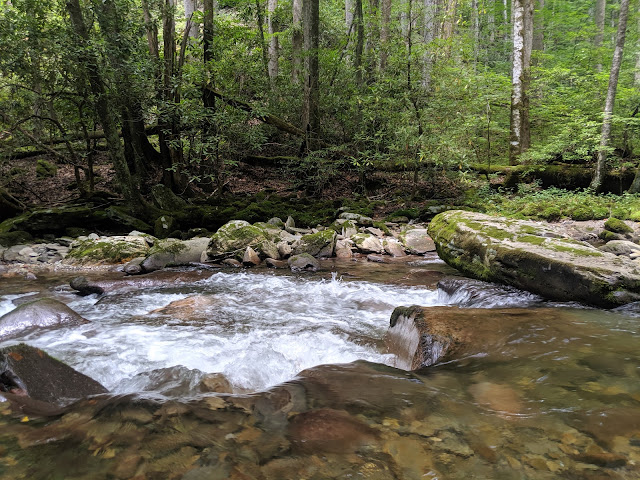 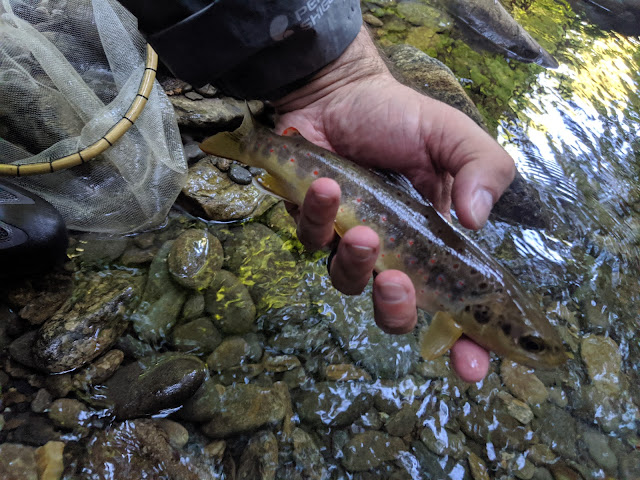 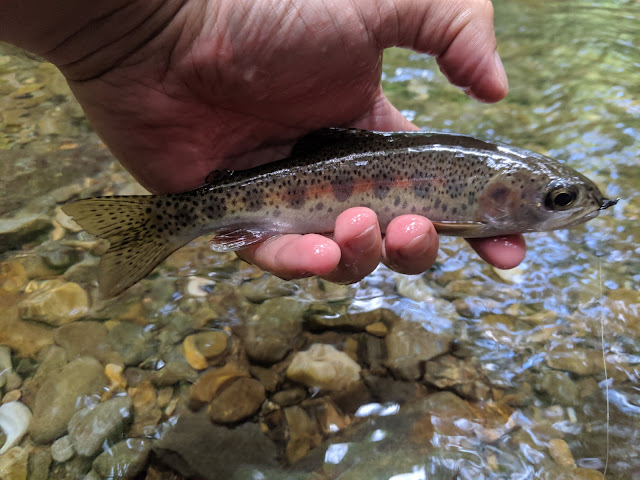 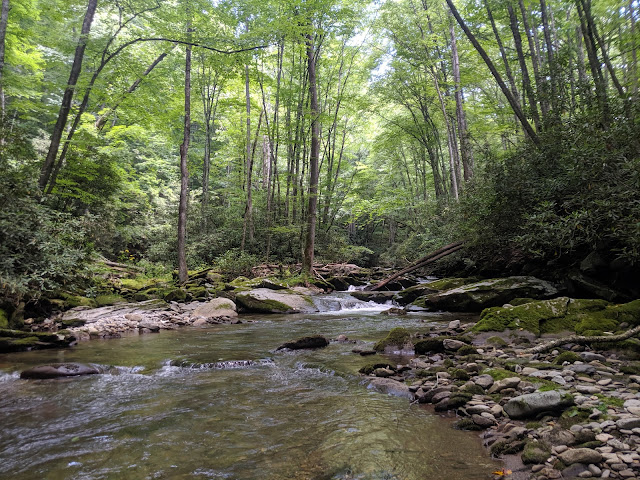 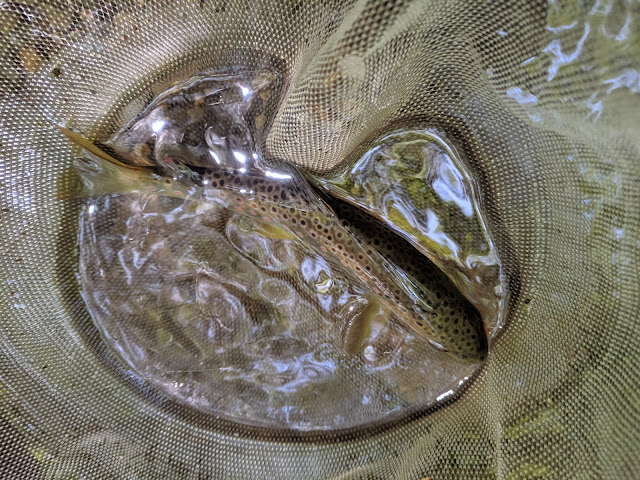 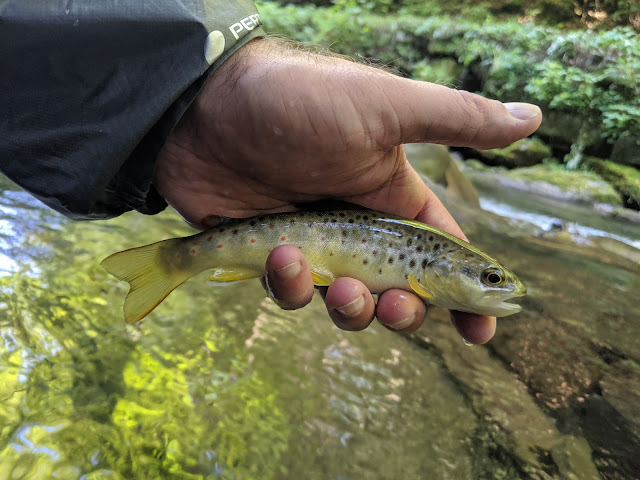 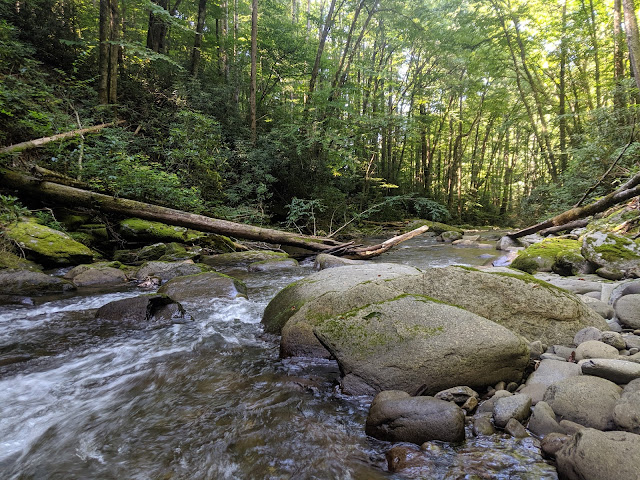 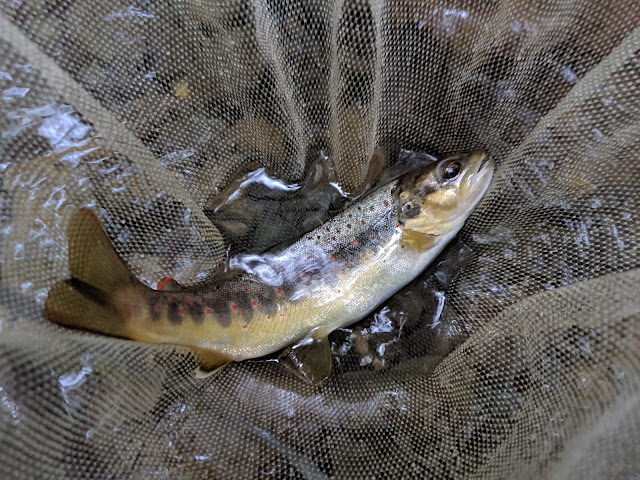 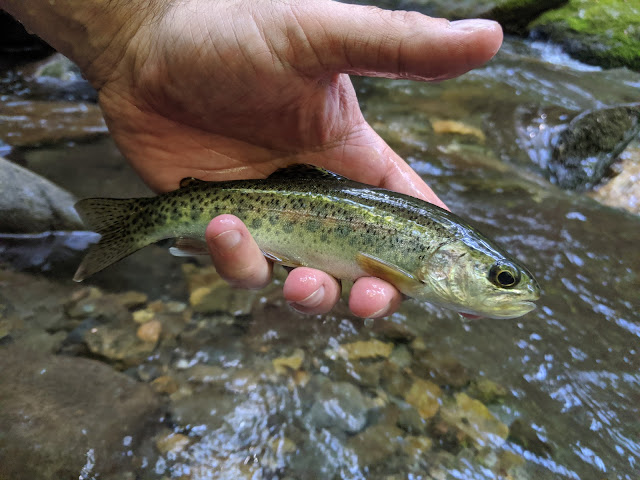 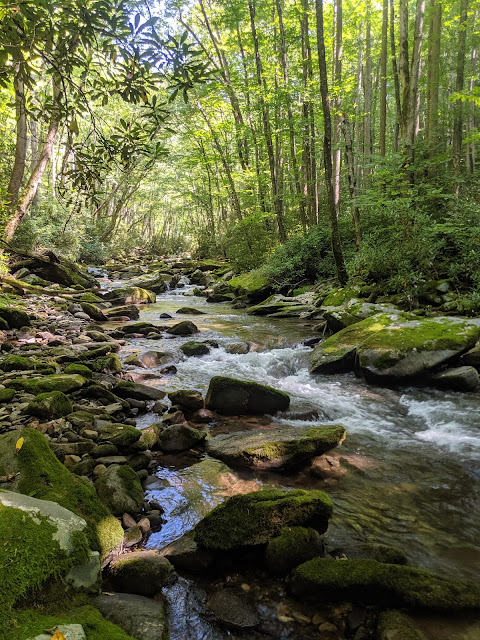 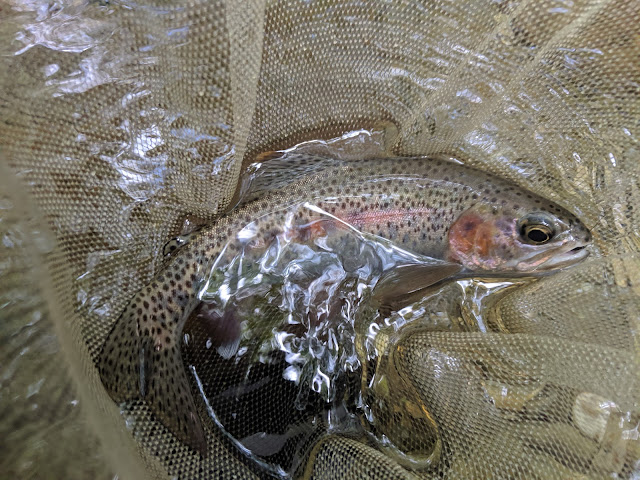 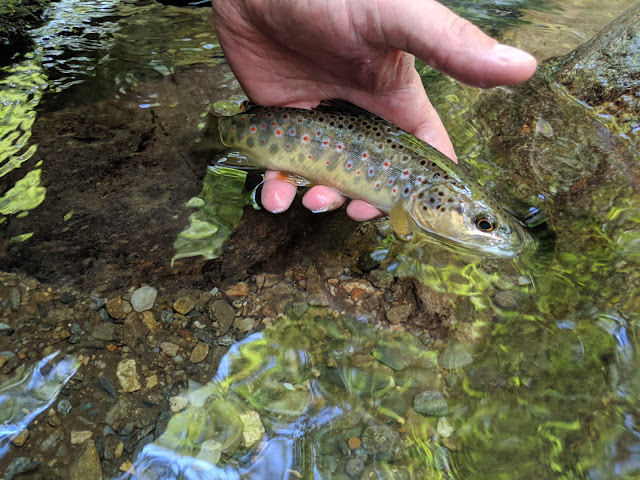 Not realizing the time, I glanced at my phone and was surprised to see it was approaching 4 PM. I had been fishing for more than seven hours, but it didn't seem nearly as long as the drive up from Florida. I suppose focusing on reading water, casting to, and landing fish makes the time melt much faster than an audiobook.

A few quick notes about some of the gear at hand. I used the Oni Type III tenkara rod for much of the day, although I did switch over to the Nissin Royal Stage 320 for a bit, just because I enjoy that rod as well. Both cast a 3.0 Dragontail level line beautifully. Much like swapping rods, I also swapped flies, just to see if it mattered, (it didn't). Most of the fish were caught on a beadhead Road Kone kebari, but I also caught some on a Creekside Peacock & Hen Pheasant, some Three Rivers Coulee Killer nymphs, as well as a buggy black wet fly that Graham Moran gave me at the recent Tenkara Summit. I don't recall what he called it but it was a simple black thread bodied fly with some black, swept back rooster hackle. It seemed to be a rainbow trout magnet, particularly when twitched out of the white foam of a plunge pool. 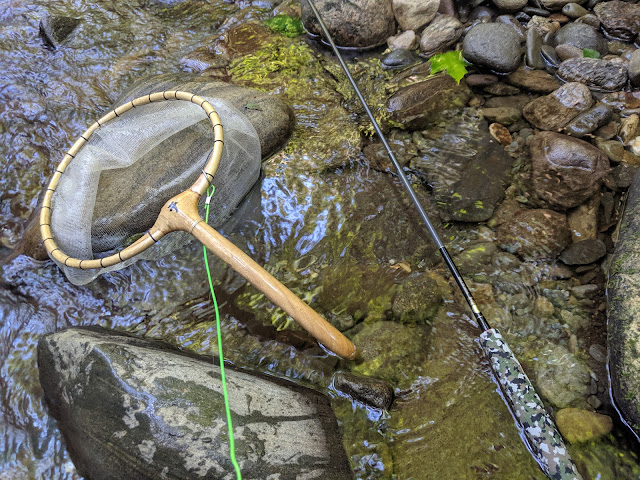 Out of the water and now late in the afternoon, my stomach wasn't happy. I had gotten up so early I didn't grab any breakfast, and in the haste to get out the door, forgot to stop to grab any snacks for an on-stream lunch. Now in the car and headed to the hotel for a quick shower, a fortunate Google Search pointed me in the right direction. 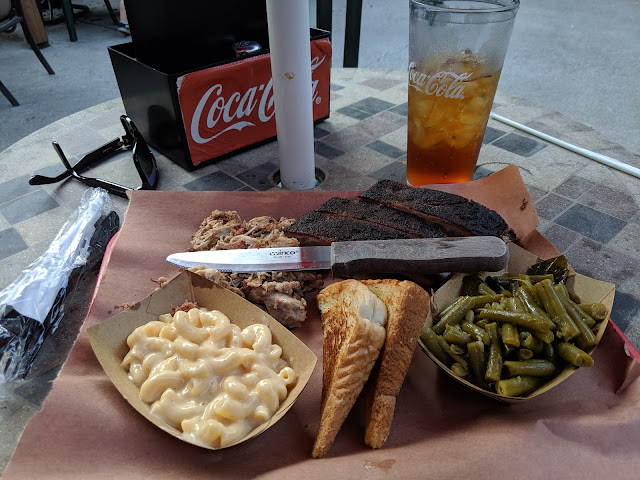 Sure, I probably should have moved the knife for the photo (it was how they presented/served the platter), but damn if Haywood Smokehouse in Waynesville, NC doesn't make some of the best BBQ I've ever had... The ribs in particular were phenomenal.

It was a wonderful way to end a enjoyable day on the water. The full belly also ensured I'd sleep well that night, something I desperately needed, especially considering I had that equally long drive back to Jacksonville awaiting the next morning.

So you might be asking, fourteen total hours in the car (round trip) for a single day of mountain trout fishing and first class BBQ?

Absolutely! And it was definitely worth every minute behind the wheel.
Posted by Michael Agneta at 3:00 AM