Time to post some photos from the next stop on the Griswold Alaskan Vacation, this time in...
Juneau, Alaska
The second port we were hitting on our swing up the coast was Juneau, the capital of Alaska. Interestingly, we were told that there are no roads out of Juneau that connect to another inland highway or lead to another major city... so the only way you can get in and out of Juneau is by boat or by air. I didn't fact check that, but that's what our tour guide told us, so I'm going with it.
But before we actually docked at Juneau, our ship actually took a little early morning side trip through some fjords to check out Dawes Glacier. I have to admit, it was a little strange waking up, looking out the window and seeing big chunks of ice floating by... 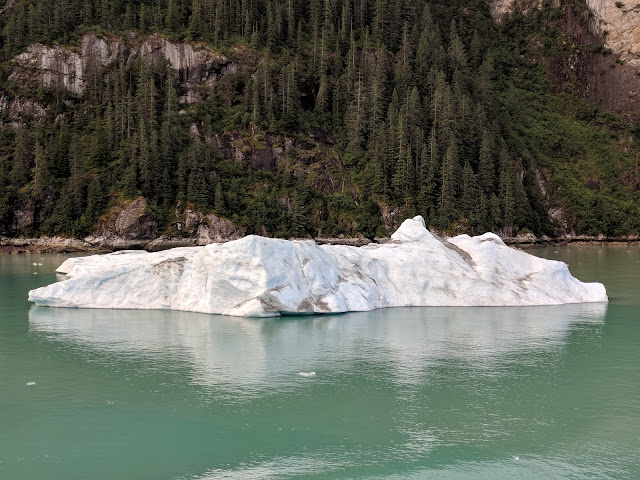 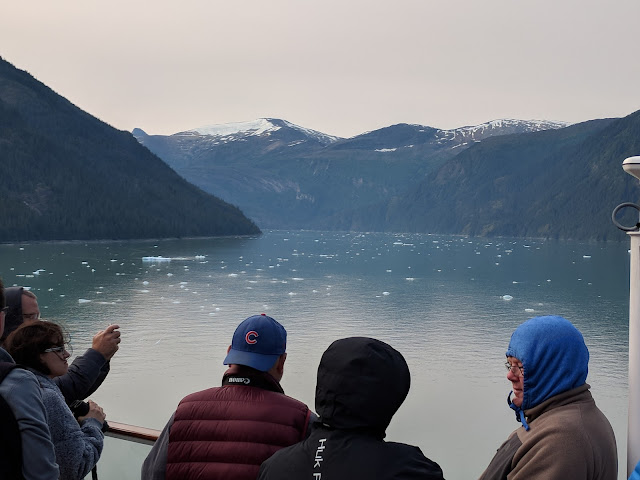 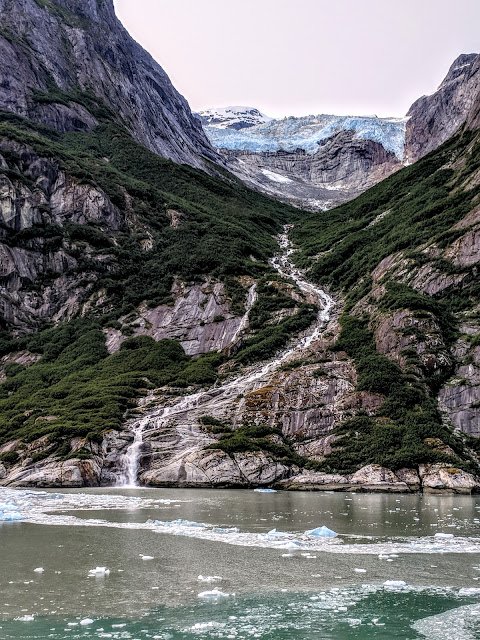 As we approached the glacier, a few other, smaller tour boats came up alongside us, it was a pretty crazy sight from the balcony of the ship. Just rugged mountain cliffs, icy water, and little boats zooming around...

Then our boat turned around... and BAM... giant glacier right in your face. This photo really doesn't do the wall of ice any favors, either in beauty, or to give an idea of the immense scale. This photo is a little more close up and you can sort of see where a huge chunk broke off the side and fell into the water. That's called "calving" for those of you not in the know... (Ok, I had never heard that term either.) 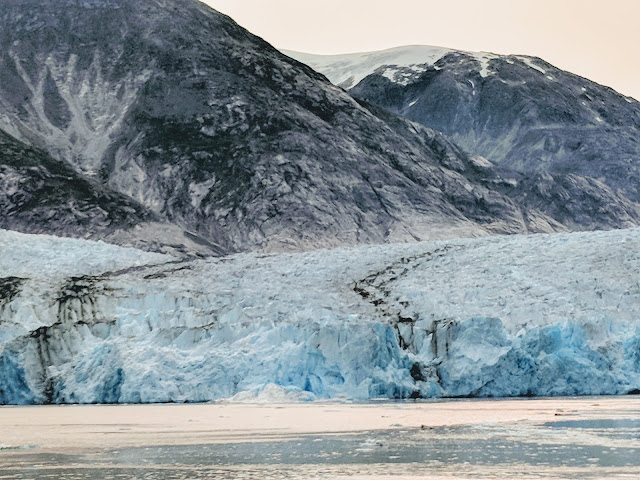 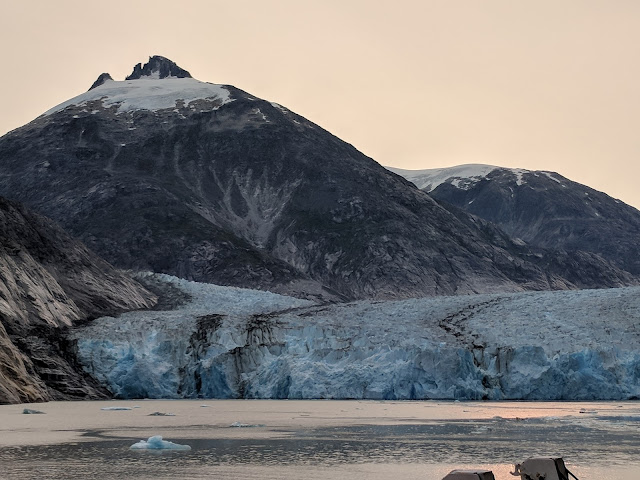 That glacier was pretty beautiful to look at. I only wish we were able to get a little bit closer, we had to be at least a good 5 or 6 football fields away.

Following the glacier viewing, our boat left and headed over to Juneau for the shore excursions. Juneau is a pretty big city (especially in comparison to Ketchikan) and seemed rather normal. While it has a similar touristy "main street," there's plenty of houses and other normal type stuff (like McDonald's) beyond that one strip of road. Strangely, it was also like 85 degrees and totally sunny, not exactly what we were thinking when we booked our Alaskan vacation to escape the Florida heat. At least there was comparatively little humidity.

Our tour for the afternoon involved heading over to the Mendenhall glacier, which has gained its popularity not necessarily for its beauty or size, but because it's one of the only large glaciers people can actually drive a car or easily hike-in to see. I guess all the others are a bit more remote (like Dawes) or at extreme altitudes.

So hiking we went... from the parking lot, it was only about a half hour to the prime viewing spot over an easily traversed gravel trail. 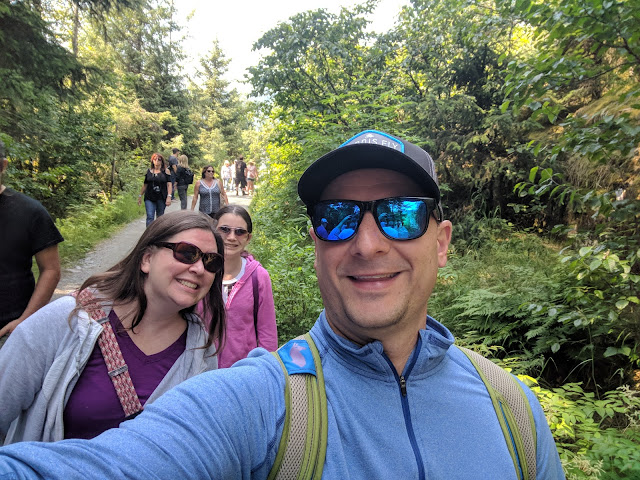 There were a few places to view the glacier, including a photo overlook which was about a 15-minute hike. We chose the longer hike because it not only placed you much closer to the glacier but right beneath a huge waterfall, Nugget Falls. Like literally right beneath, where the mist and spray will get you wet if you stand in one spot for too long. 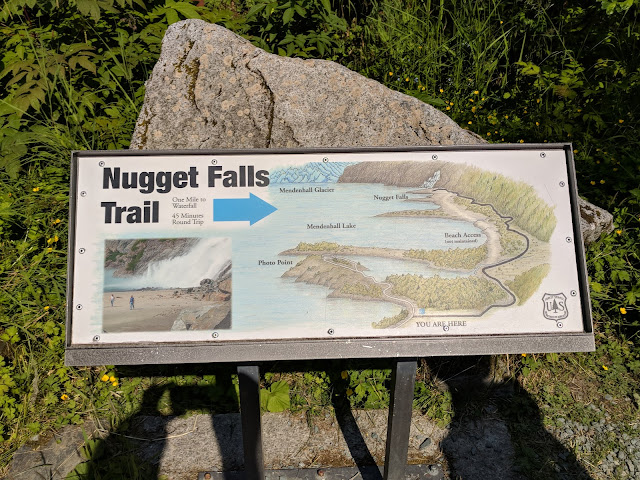 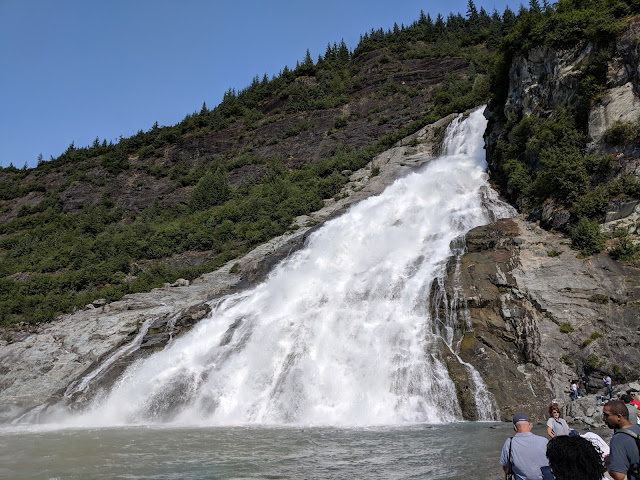 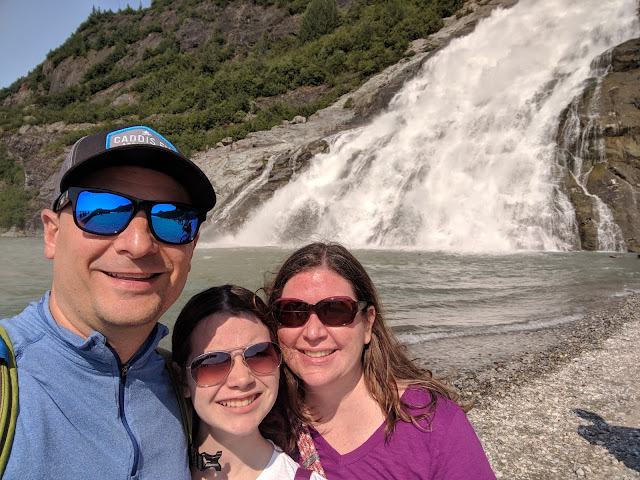 If there's one thing I regret about the whole trip, it was that we didn't get to spend more time in the park surrounding the glacier. Our tour allowed us a little over an hour to wander around the premises, but with a half hour hike to and a half hour hike back from Nugget Falls, that took up almost 100% of our time before we had to hop back on the bus. There were several more scenic hiking trails to explore, including an elevated walkway over a creek with spawning salmon. People in our group who went to the creek rather than out to Nugget Falls mentioned they saw a Momma bear and her cub chasing salmon in the stream that afternoon.

Back on the bus, we took a short 10 or 15-minute drive over to a small dock where we were going to go on a whale watching tour for a few hours. It was operated by Allen Marine Tours, and it was pretty awesome, even though my photos and videos didn't come out great. Really needed a "real" camera with a legit zoom lens, rather than my cell phone.  Regardless, the sights (& memories) are all quite vivid.

The first whale we saw was a humpback whale. It showed itself quite a few times and even waved its tail before taking a deep dive. The markings on a humpback's tail are like "fingerprints," so our guides identified this whale as "Sasha." We ended up seeing 3 or 4 humpback whales on this tour.


Then we saw a ton of killer whales, or for those inclined, orcas. 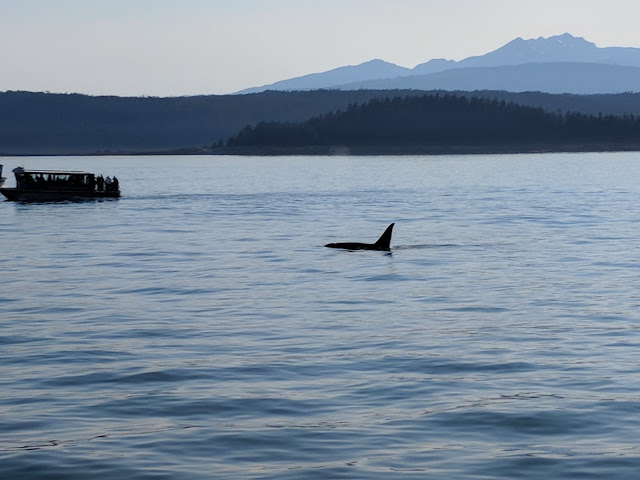 And even more orca. The guide on the tour boat said they only see orca like 1 out of 10 tours, so this was evidently rare. I think he was just telling us that to get a larger tip for him and his crew. Either way, this last group was pretty awesome. It was two adults and two babies... or calves...(wait, I though calves were associated with glaciers... eh, whatever). You can see most of them in the second photo below... and yes I was too lazy to crop out the top of the dude's head... 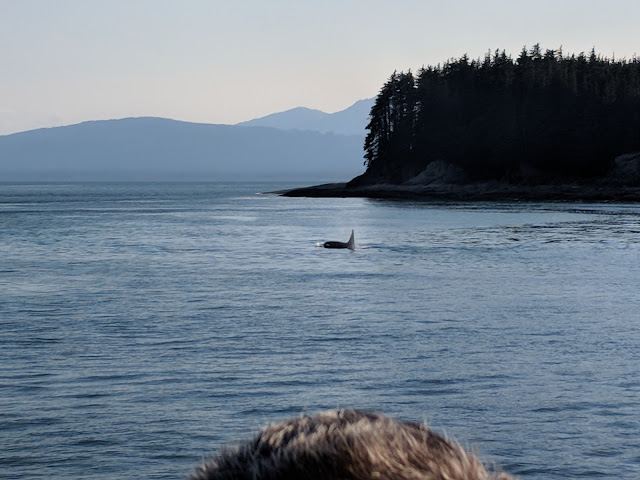 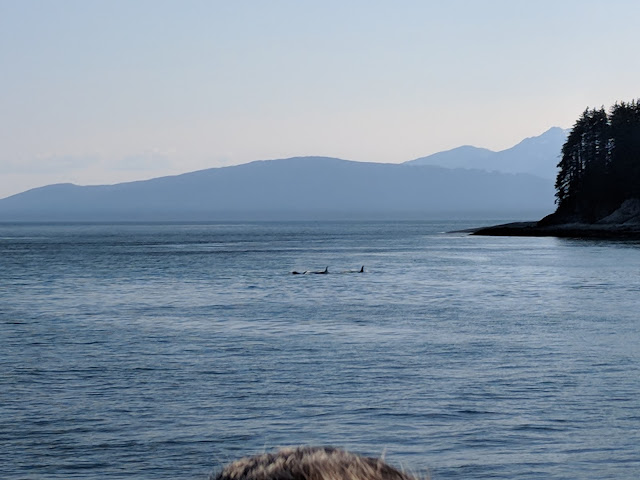 After that, our time in Juneau was unfortunately pretty much over. We hopped back on the bus, headed to the ship, and left Juneau headed to Skagway & the Yukon... No parting shots this time, we were all too tired from a long day out and about.