Hmmm, now this is something... as you know I have a fondness for obscure Japanese fishing methods.

Looks like somebody took the Tenkara USA model of "introducing a Japanese form of fishing to America" up a notch by launching the Keiryu Rod Co. 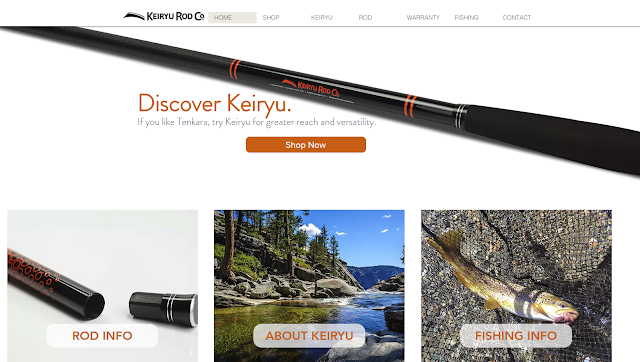 (Hope my friends in Idaho don't take offense by the name selection).

For those not in the know, "keiryu" means mountain stream in Japanese. The particular rods this company is selling is for a style of fixed-line fishing that also uses long, telescopic rods, but instead of being engineered to cast flies, they employ bait. As so much, it's not fly fishing, and certainly not tenkara, but to the casual observer, they may look very similar from afar.

Chris Stewart over at TenkaraBum has been selling keiryu "stuff" for a while now; his site has a breakdown of what I'm trying to describe if you're interested in learning more. Obviously, there's more to it, but his link will at least point you in the right direction.

I've actually only seen keiryu bait gear in person once. There was a gentleman (Craig) I became friends with on tenkara fishing forums & Facebook a few years back who invested in the system and brought it out to the Midwest Tenkara Fest back in 2015. He even put on a short presentation on how he builds & fishes his rigs.


Anyway, will be interesting to see if this catches on, fades away, or even becomes a thing. I only found out about it stumbling across a newly uploaded video on Vimeo (there's actually a few there), so my guess is there will probably be some sort of marketing push in the not too distant future. Guess we'll see...

Oh, and if you're interested in picking up one of these rods, looks like they're selling them for $170 through Amazon. "Prime" it, and you'll have it in time for the long weekend!