Trout. They're constantly swimming around inside my head. Holding in the current of my thoughts, not willing to scatter, even when startled by the ruckus of the outside world. Especially brown trout. They're particularly stubborn creatures.

Last weekend I had the opportunity to travel to Atlanta for business. Atlanta is not terribly far away from my home, an hour by plane, about five by car. I bolt from work early on Friday afternoon, looking forward to the extended drive. 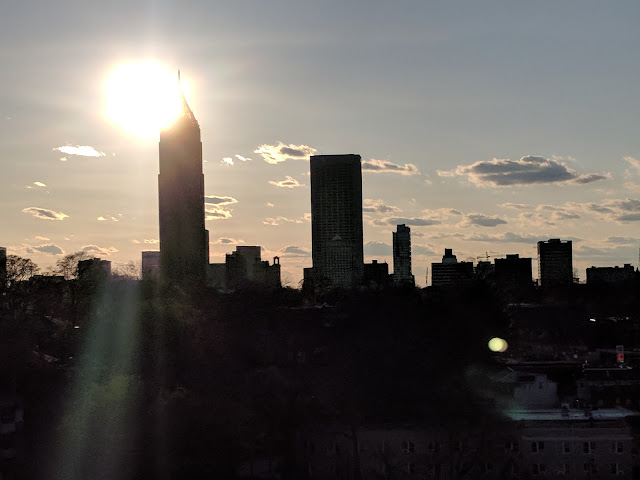 Adel, Cordele, Unadilla, Byron, McDonough. All stops along the interstate begging you to feed, fuel, and perhaps stay awhile. I speed past them all, save the Zaxby's & Shell in Tifton, keeping one eye out for state troopers, the other on the road.

But before Atlanta, I was going to steal a day and a half and head the mountains to the north. The mountains with cold water streams, tunnels of rhododendron, and those haunting wild trout.

The evening's destination was Dahlonega. A small college town with a tourist trap of a city square. It proudly boasts its heritage as the heart of the Georgia gold rush. However, for all the history and quirky charm, it's certainly not frozen in time.

Hey, isn't that Steak n' Shake at the top of the hill new? I know that Dunkin' Donuts is... 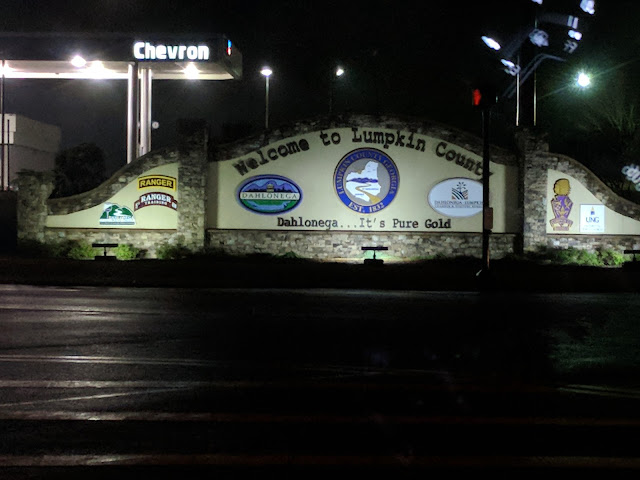 Besides the gold, it owes its attractiveness to travelers as a gateway of sorts to the Southern Appalachians. Their namesake Trail is nearby. The trout are as well.

Leaving Dahlonega on Saturday morning, it's chilly, cloudy, and not particularly promising. After winding through the mountains, gradually gaining and then losing altitude around each corner, I find the eventual gravel forest service roads are strewn with deep ruts, potholes, and puddles of thick muck and mud.

I pass by a few of the campsites within the Wildlife Managment Area, they are found to be all empty. Only barren, charred remains of fire pits past. 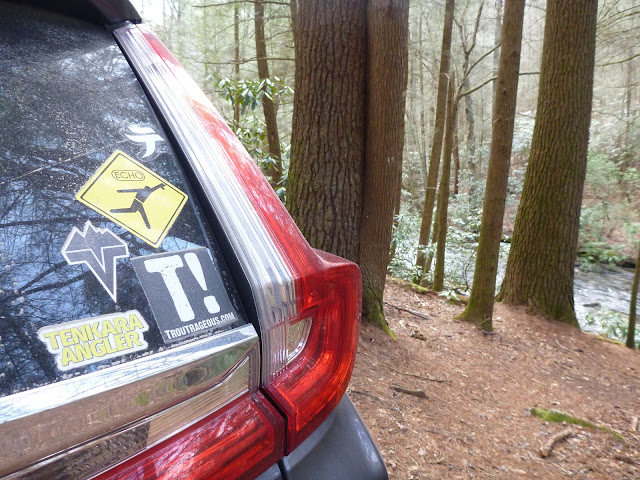 As the road veers to the right the stream presents itself through the break in the trees. Running high and fast, you can hear the power in its low rumble. It was clearly going to be a difficult wade.

Rod in hand, I entered the water only to find my head clear. The outside world quickly fades away as I am engulfed by moss-covered boulders, downed tree limbs, and rush of the cool moving water around my knees. 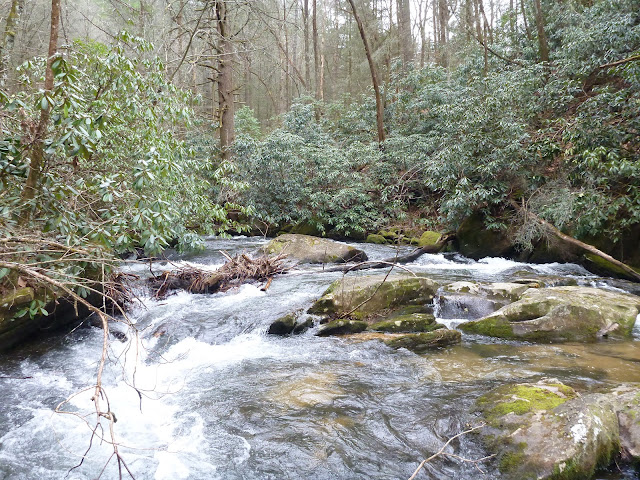 A few casts, a few silver flashes, a shot of adrenaline. The trout in my head swim at my feet, no longer captives of my thoughts.

The first to succumb was a small rainbow, it's body littered with dark speckles and the shading of parr marks. Plucked from behind a rock. Despite the rushing current, it rose to sample a simply tied white hackled fly. Suspended like my disbelief, right beneath the surface. 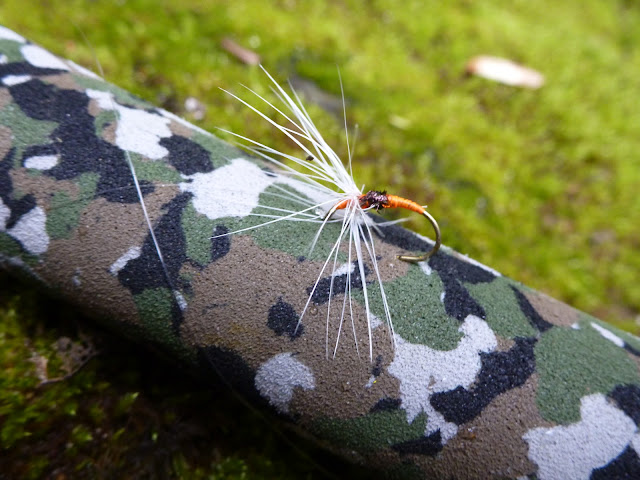 Shortly thereafter, the rain began. It was a chilling, steady rain. It was also a rejuvenating rain. You could tell it was cleansing the hills of their winter slumber. Eyes off the water to adjust my rain jacket, sprouting shrubs and flowers suddenly came into focus. It was hard not to smile... or at least smirk. 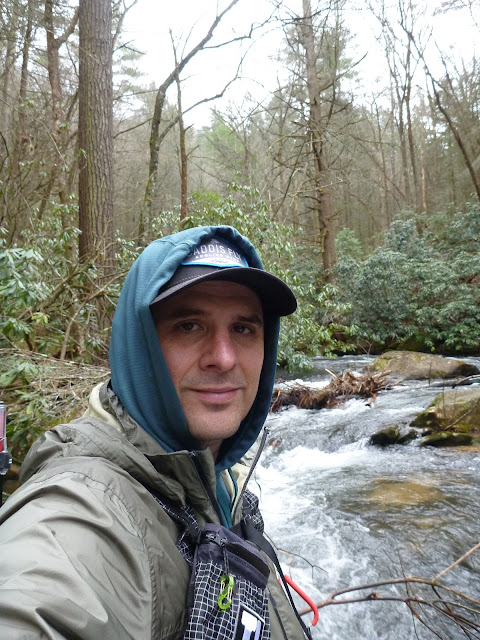 What followed were a few waterlogged hours of hopping rocks, picking apart riffles and runs, surveying plunges and pools. A handful of trout emerged from the foamy clouds of whitewater, guided one by one softly to the bottom of my net. I continued to follow the trail of rainbows until the pot of gold presented itself. Or perhaps a pot of brown? 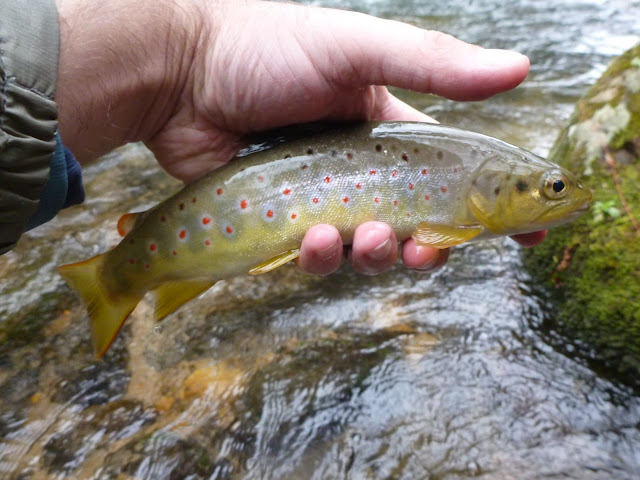 Slowly, that beautifully freckled trout swam away, I felt content. It was time to head south. It was getting darker, the water was getting skinnier, and the rain was coming down harder. Atlanta was calling.

On the hike back to the car the realities of the world began flooding my mind.

Where are my car keys? Do I have enough gas to get to Atlanta? Where am I going to eat dinner?

And as my mind refilled with clutter, the trout returned as well. Holding, steadily in my stream of subconscious, waiting for the day they would once again be released back into reality.
Posted by Michael Agneta at 6:00 AM