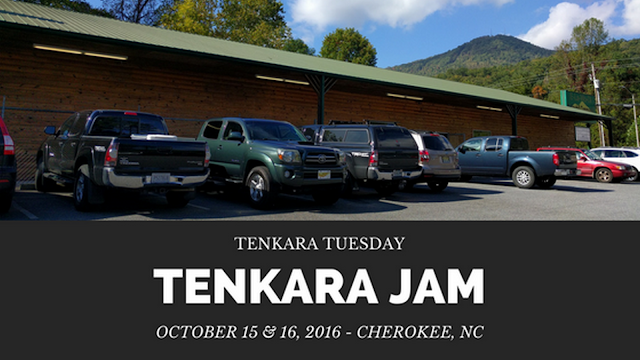 After last week's post that really wasn't a true recap of the 2016 Tenkara Jam, I thought it probably right to do a complete recap for those that are interested, but weren't able to attend. And for those who don't care about the Jam, well, this will be my last post about it, I promise. :)

The Tenkara Jam was held on the 15th & 16th of October, in Cherokee, North Carolina. Cherokee is a pretty interesting mountain town, one that borrows from it's Native American heritage, but mixes in quite a bit of tourist kitsch. It's also a gateway to the Great Smoky Mountains National Park, which means excellent outdoor adventure opportunities, including fly fishing.

Attendance of the Tenkara Jam was pretty impressive, particularly on Saturday. I believe organizer Jason Sparks posted on Facebook in the following days that over 170 people attended the event. That's a lot of people! And while many were already experienced in the dark art of tenkara, there were probably just as many newcomers, interested in learning what the fuss was all about.

I was at the Jam not only as "fanboy," but because I wanted to promote my other endeavor, Tenkara Angler magazine. To say that it was well received is an understatement. It was really cool to meet several of the magazine's contributors that I had only communicated with via email or social media. It was even cooler when somebody came up to the table and said, "wow, I didn't know there was a tenkara-only magazine, how do I subscribe?" By the amount of business cards and stickers I handed out, I'm pretty sure it was a mission accomplished.

However, I wasn't the only vendor at the Jam. There were many purveyors of tenkara goodies in attendance. I'll run you through a few highlights below: 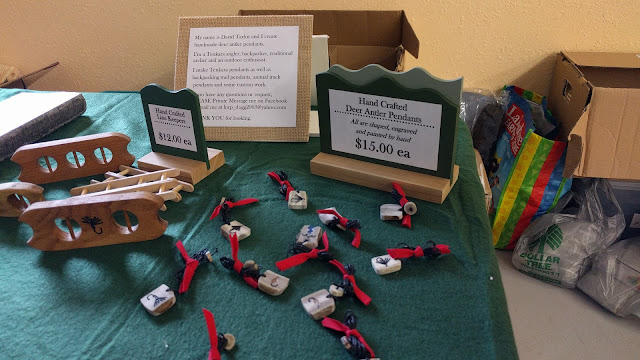 But no, that's not all...the presentations were all top notch as well... 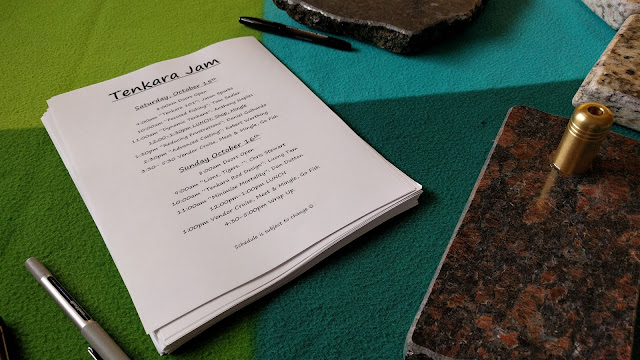 As you may be able to see from the flyer above, there was quite a bit on the agenda, and I have to say despite having mountain streams a stone's throw from the event hall, each presenter kept the room's attention with extremely entertaining content.

Jason Sparks kicked off the first day with opening remarks and an "intro to tenkara" of sorts that got everybody up to speed on the basics. Jason's energy is amazing to witness. I often refer to him as a tenkara evangelist, but not in an over the top way.


He was followed that morning by the Executive Director of the Outdoor Writers Association (and more importantly, tenkara guide) Tom Sadler, Anthony Naples of Three Rivers Tenkara, Daniel Galhardo of Tenkara USA, and Rob Worthing of Tenkara Guides, LLC.

Each brought a little different perspective to the table. Tom's presentation was a mixed bag about everything, borrowing from his experience as a tenkara guide, as well as his encounters with other tenkara anglers and fishing personalities over the years. Tom is a fantastic and relatable speaker, should you have the opportunity to listen to him speak, take it.


Anthony focused on creating and defining your own tenkara, blurring the boundaries of what you might think to be acceptable and blazing your own trail through experimentation and self-discovery. It's one of those things that really appeals to me as an angler. There is no right or no wrong, there's only what works for you.

Daniel's presentation featured a humorous video showing how it only takes one "crazy person" and a few early followers to start a movement. He also gave a few tips on simplifying your fishing in the name of reducing frustration and finally, presented Jason Sparks with an Ambassador award on behalf of Tenkara USA, a very nice touch.

Rob's "Advanced Casting" talk was perhaps the highlight of the first day. Borrowing from well-established sports training techniques combined with motion capture software, Rob broke down not only the motions required to become a more skillful caster, but showed us how in real-time through the use of video.  It was kind of like watching a football analyst diagram a play on TV using the "telestrator."

Day two was much of the same, simply with different presentations.

Chris Stewart of TenkaraBum opened up the day's schedule with a walk through all of the species one can pursue with fixed-line fly fishing rods. He started with examples of tiny fish such as shiners, slowly building up to some serious fish like carp, catfish, and musky. Tenkara may have originated in the mountains of Japan in pursuit of trout, but Chris showed how the same general set of tools can be evolved to attack much different angling situations around the world.

Luong Tam's (Tanuki) presentation about tenkara rod design and manufacturing was pretty interesting. He recently visited the factory in China that produces his rods. He was able to take many pictures, some video footage, and even passed around samples of raw carbon fiber. It's amazing how much of tenkara rods are actually still made by hand, with machine assistance (of course).

Finally, Dan Dutton spoke to ways to minimize fish mortality while catching (and releasing) your quarry. Some of the statistics he threw around were quite astonishing. Tips on improving fish handling were discussed, we were all introduced to the phrase "caudal peduncle," and I think left the Jam all a little more aware of and educated on this subject.

After that, the formal portion of the Jam concluded and we were free to mingle, or simply go fish!

I know I wrote a lot above, and truthfully, could have written a ton more, but in the interest of keeping this blog post somewhat readable, I'll just stop here. In retrospect, the 2016 Tenkara Jam was a fantastic weekend of tenkara camaraderie, chock full of new friends, gear, and educational experiences. I really can't wait until next year, wherever the venue.

Plus, the fishing and surroundings weren't too shabby either.