In last week's Tenkara Tuesday, I mentioned that I had a new Tanuki rod on pre-order, and had also sold off several tenkara rods that just didn't "fit" me well. I didn't say what the rods were, but in the comments section, bolder_in_boulder asked the following question:

Well, even after a recent purge, I've still got a lot of tenkara rods.
Probably too many than I could dream of fishing with any regularity.

So bolder_in_boulder, I'll lump them into 3 groups...

Rods I've Held On To, But Don't Fish Often 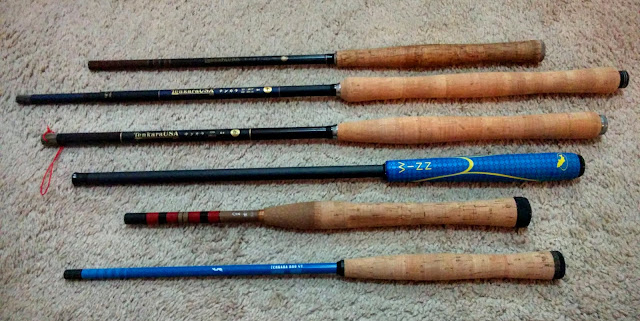 Rods In My Regular Rotation; The Fab Five

So the observant tenkara fanboy will probably notice something odd, "hey where are all the Japanese rods? No Nissin, no Shimano, no Daiwa, no Oni?"

I have nothing against Japanese rods (note the Suntech TenkaraBum & Sakura Kongo are on the list), I just never took the plunge in a big way. Call me crazy, I like to support the folks I know. People I've become friendly with online, people I've met in person...had conversations with...shared beers....stuff like that. Although I am damn tempted to try the "magic" of an Oni some time. Maybe if they #savethecamohandle. (Ha!)

*EDIT: I have since purchased an Oni Type III; holy crap... if you're fishing intimate water, what a rod. Just sexy full-flex goodness. Save your pennies and get one, it jumps to the top of this list.*

In the end, there's really not a bad rod in the list above. These just happen to be my current preferences. You might have a differing opinion of my choices, and you know what, that's fine, we're all different. Nothing that I wrote above should be an indictment of your favorite rod(s), either as angler or manufacturer. Ten colors, you know? I'd love to hear about your personal favorites in the comments below.