The Friday "Five Fish On The Fly" Bucket List

It's taken me to places I'd never thought I'd visit, introduced me to people I'd have never met otherwise, and provides the therapeutic elixir needed to offset the daily grind of everyday life.

Oh, and the fish. The freakin' beautiful fish...
(I mean it's practically translucent!) 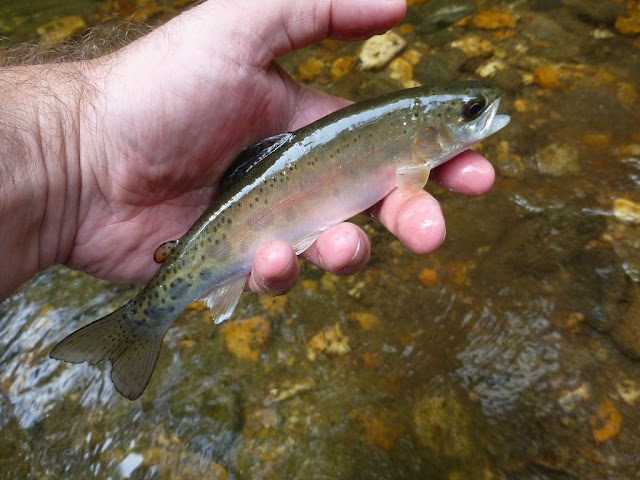 That said, there are a lot more places I'd like to go, people to meet, and fish to attempt to outwit. Not all are exotic, heck most aren't, but I'd really love to expand my species list beyond the standard brookie-brown-rainbow trout trifecta, and of course, the warm water panfish & bass.

This is my short list of five fish I'd like to catch on the fly, in no particular order.

Yeah, there's something somewhat pornographic about how people take photos of them with their fin fanned out, and I've heard they're not the best of fighters, but there's just something about this fish that intrigues me. Word on the street is they might try to reintroduce them to Michigan waters, so perhaps the quest won't be that far out of the way after all.

Perhaps with the exception of brook trout, I think this is the prettiest trout/char on Earth. The colors are just...well...put it this way, I'd be heartbroken if the photos I've seen online are deceiving and the byproduct of some sort of post-production digital filter. Plus, from what I understand, these suckers live quite a bit off the beaten path, so finding them would be an adventure onto itself. "Tenkara Tanuki" Luong Tam is going to try and find some in August, I wish him luck!

I live in Florida, but a little bit too far north to really get into snook. We get some up in Jacksonville, but it's not like further south or on the Gulf coast. Like I said, not particularly exotic, but I haven't caught one yet, and probably the best part is they're typically accessible by walking the beach at the right time. No boats required. I think my best shot was the time I spent in Sanibel a few years back, but back then I didn't know what I didn't know...

My Facebook buddy JP posted some really sick tiger trout pics the other day, including the one above. I'm not ashamed to admit, I've never caught one of these brookie/brown hybrids. Heck, I'd never expect to catch a chunky one like this, but I think it'd be fitting, and absolutely Troutrageous!

Rod Hamilton's ears are probably perking up right about now...
I half-ass tried this once on vacation in the Cayman Islands. It was one of the biggest adrenaline rushes I've ever had fly fishing. Unfortunately, I really had little to no idea of what I was doing, and was just in the right place at the right time with the right tide. I totally spooked the few I was able to approach, but to see those fish explode and take off...well, damn...  Yes, I could probably get my first bonefish quicker if I hired a guide, particularly one with a boat, but I don't know, I'd rather catch one on my own, on foot. No offense to guides out there, I'm just weird like that.

So that's my five.

Any fish on your bucket list?
Let's hear it in the comments below...