Welcome to Tenkara Tuesday (on Wednesday)...

Ever since I moved to Florida, I've been seeking ways to fine tune my tenkara tackle to the abundant still-water opportunities that present themselves seemingly everywhere. While many of the same tenkara rods, lines, and flies can be used with great success, I've found that adding a good floating tenkara fly line to the arsenal has been an excellent enhancement to my gear cache. Heck, I even wrote a Tenkara Tuesday post about it back in May.

When I was approached to test out a new floating tenkara line offering from Three Rivers Tenkara, I figured the product would be very similar to some of the other lines I was using...but upon further examination, I couldn't be more wrong.


It became very clear while attaching the line to my rod was that it was truly "ultralight" and that wasn't just a buzzword used to sell lines. Since floating lines are made from some sort of plastic, they tend to have a little bit of bulk to them, and the models I've used in the past purposed toward tenkara rods are no different. The thing that jumped out at me was that this line feels and handles more like a light furled line, and simply does not overpower the slender tip section of the tenkara rod.

The line attaches to the rod's lillian similar to other floating or furled lines with a girth hitch. Easy on, easy off, without needing to know how to tie knots. The tippet then attaches to a tippet ring at located at the end of a short length of high vis mono. (This change was made later, my sample did not include a tippet ring and utilized a figure 8 knot stopper in the mono to serve as a tippet anchor).


Wanting to really give this line a solid test drive, I hooked it up to 6 different tenkara rods that I own from several different manufacturers and did a little lawn casting to a paper plate about 25ish feet away. Tossing out about 30 or 40 casts from each rod, softer rods seemed to lay out the line a bit better than stiffer rods. Believe it or not, I found the rod that it paired with the best was the Tenkara USA Ebisu.

Taking it to the water, dry flies and kebari cast very well, a simple flick of the wrist was all that was needed to place the fly wherever I wanted, almost on demand. Small foam poppers and hoppers (my favorite flies for Florida bass & bluegill) proved to fish great on this line too, their relative bulk didn't overpower the line at all, and the line consistently floated up top, cast after cast. 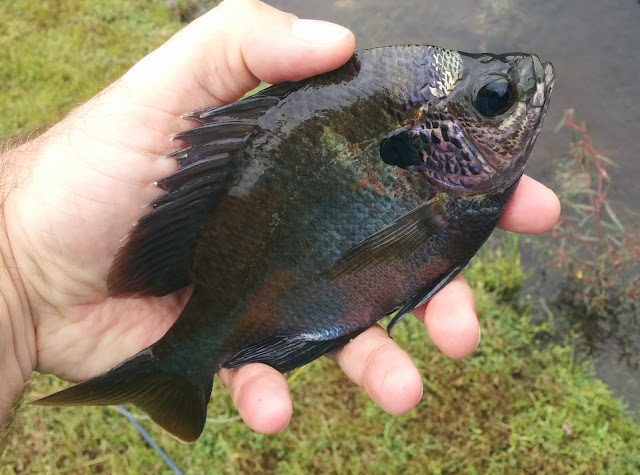 I did try sizing up to a size 8 bead head woolly bugger and that was probably pushing this line's upper limits. The cast was more of a lob (the rod plays a part in that too), and some of the heavier floating tenkara lines I've used in the past have turned over weighted flies a bit better that this line.

In the end, this is really a superior product, one that I'd easily recommend to the dry fly tenkara fisherman. Pair it with a rod with a soft tip and some foam poppers or elk hair caddis, and you're going to have a ridiculously easy to cast setup that makes catching any rising fish, be it trout, bluegill, or bass an absolute joy!

DISCLAIMER:
The Ultralight Floating Tenkara Line featured in this product review was provided to me at no cost, but carries a suggested retail price of $20-26. Although I consider Anthony Naples a friend, I currently hold no official association with Three Rivers Tenkara and did not solicit them for the product to review. It was simply offered to test for feedback during the development process.

REVIEW POLICY:
As with all independent gear reviews at Troutrageous! I try my best to keep my reviews honest and unbiased. If something is good, it deserves applause; if it sucks, I'll comment on the experience, but rather than write an uncomplimentary post, inform the manufacturer my opinion of their offering directly outside of this blog. (For real, you should see some of the stuff I haven't written about...) This policy pertains to items both purchased and provided at no (or reduced) cost.
Posted by Michael Agneta at 3:00 AM