If you're into paddlesports, there was a lot to behold at this year's ICAST & IFTD show. Personally purchasing a fishing kayak a few years ago, I have a special interest in looking at what's out there...although as an admittedly non-expert boater, I'm certain a lot of stuff goes over my head. Fortunately, many were on display in the New Product Showcase sections, so I didn't necessarily have to go hunt them down.

That noted, there were more than a few cool kayaks & SUPs on display, as well as some of the needed accessories that go with them.

In no particular order, here's a recap by manufacturer of what stood out to me...

A very highly anticipated entry from Wilderness Systems, the A.T.A.K. 140 has been receiving quite a bit of buzz since it hit retailer shelves around April or May of this year. Like many of the newer fishing kayaks, the open cockpit has a ton of room to stand up and move around in, and the standard AirPro MAX seat allows for adjustment on the water. 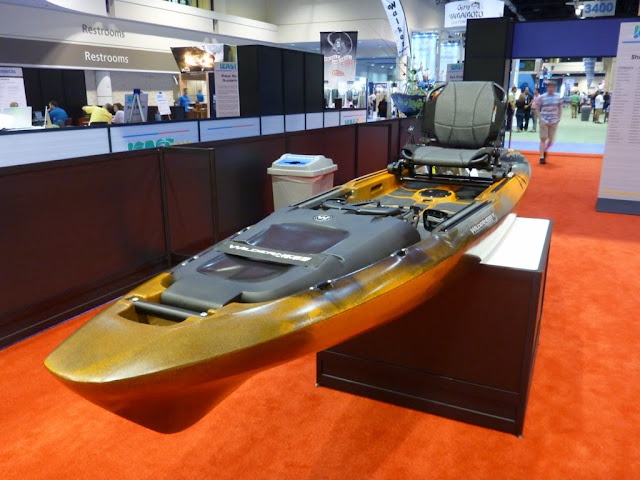 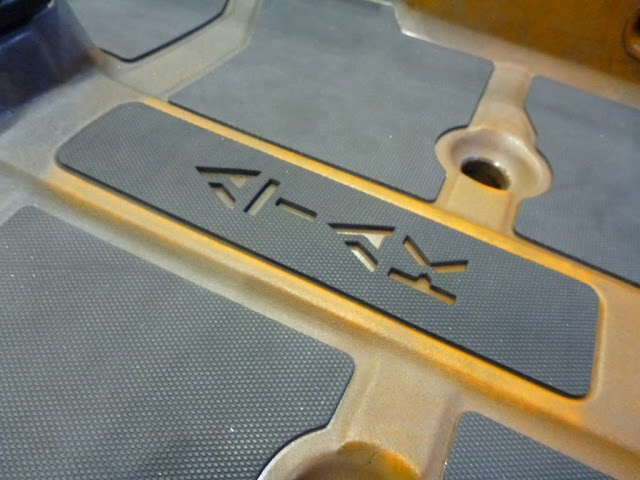 Perhaps the most compelling part, (although not pictured here, sorry), the A.T.A.K. will be compatible with Wilderness Systems' new Motor Drive, which allow anglers to truly fish hands free with the assistance of a rechargeable lithium battery powered electric motor that simply drops through an opening in the hull of the boat.
MSRP $1795 (unpowered)

I have to admit, I don't know Viking Kayaks from the next boat, but I found this feature of the Profish Reload Dorado Edition kind of interesting. 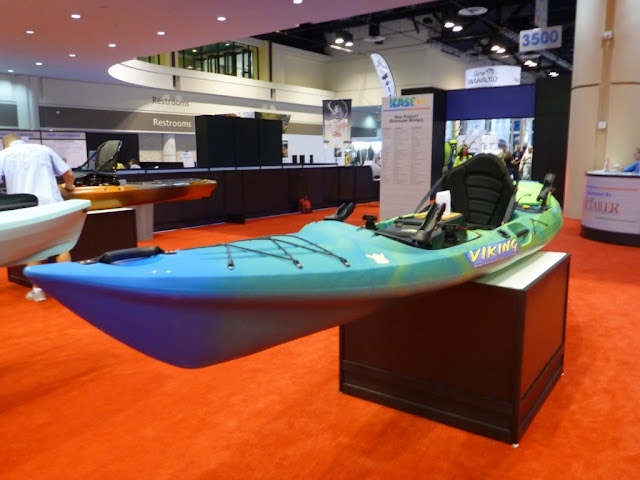 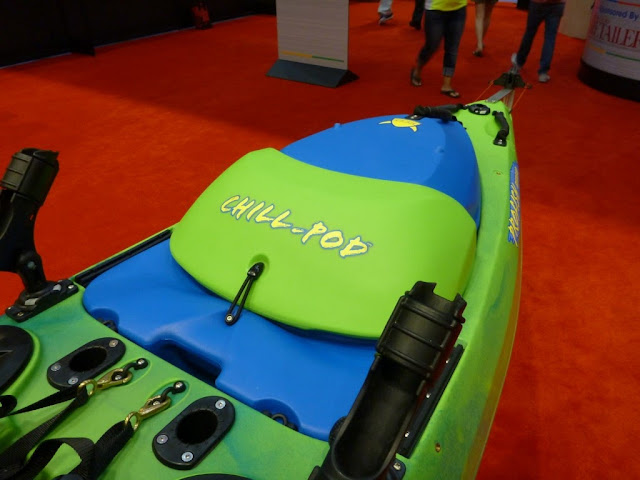 Yep, a built in cooler...or Chill Pod, which keeps ice and fish cold for hours on the water. Sure, there are other great features on this sweet boat, like the 3 accessory tracks, 4 Railblaza StarPort bases, 2 Rod holders, a seat, and a rudder...but my eyes go back to the Chill Pod...which evidently isn't a new development, but new to me.  Note: all those cool accessories only come standard with the Dorado edition of the kayak.
MSRP $1999

NuCanoe sort of gets a bad reputation because to date, the boats it has released to date are not really canoes nor kayaks. They're kind of a tweeners, that many in the kayak crowd seem to disregard due to their size and speed, even though it's stability cannot be argued. Perhaps as a response to this, NuCanoe has released the Pursuit, a more streamlined version of their Frontier model. 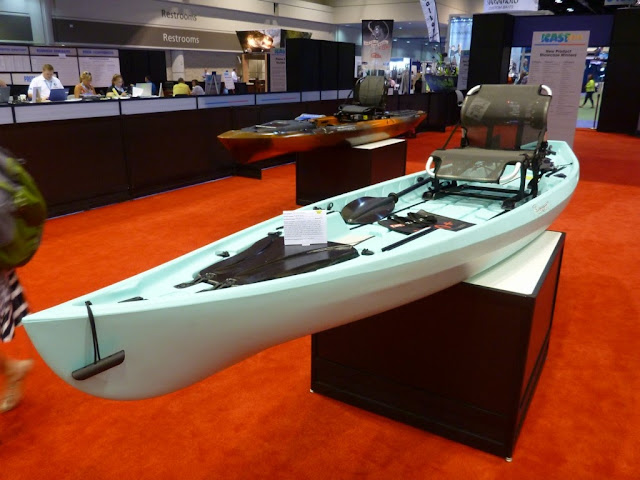 The Pursuit takes cues from the Froniter with an open, customizable deck and great stability for stand-up anglers, and adds quad internal rod tubes, paddle storage, rod holders, gear tracks, and spaces specially designed to hold a cooler or tackle crate. It also utilizes a new multi-height seat for comfort and flexibility. 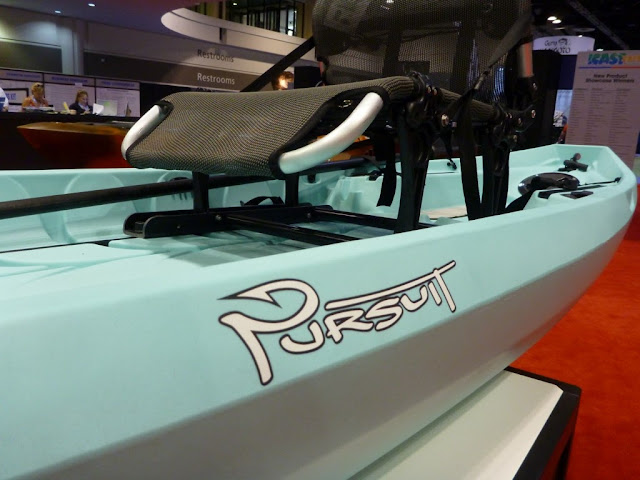 The slimmer silhouette makes the Pursuit a "faster" paddle, something that all NuCanoe critics should enjoy.
MSRP $1599

When I first walked by this boat, I didn't even realize it was an inflatable. I mean look at the beef on this Sea Eagle Inflatable Travel Canoe and all of the accessories mounted to it! 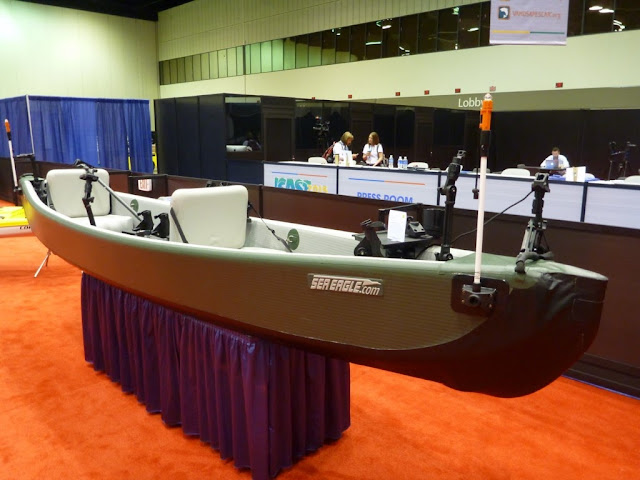 I was even more impressed when I touched the 3" double-walled inflatable hull and saw truly how rigid it was. Again, you'd never know this was an air-filled boat...at least not the kind I think of. Oh, and did I mention it was HUGE! Inflated, it's 16' x 38" and deflated it's 39" x 24" x 12" and stores in a carry bag which can fit in a car trunk. Amazing!

While I have no clue how it paddles, although it claims to be aided by bow & stern molds and rear removable skeg, of all the boats at the show, this was on the one I'll remember for a while.
MSRP $2399

I'm not certain if FeelFree had a new boat at the show, but they did have a few accessories that might be of interest to kayak anglers, a camo fish bag & a camo crate bag. 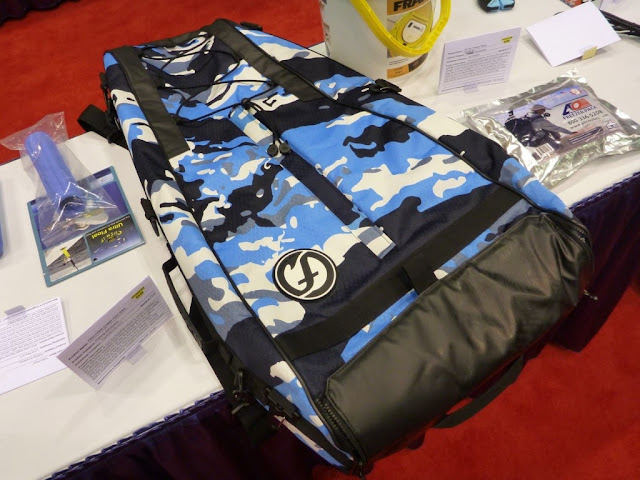 The Fish Bag is close cell foam insulated and designed to fit in your kayak for storing and keeping your catch nice and cool. Fortunately, it also has a removable liner to get cleaned or hosed out...because no camo pattern can hide the stink of dead fish.
MSRP $109-$139 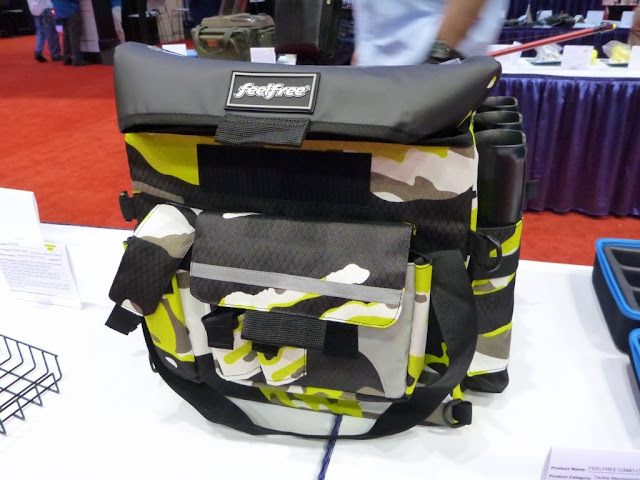 The Crate Bag is a Swiss Army knife of functionality for your kayak. Large storage capacity is a given, but it also has side holders that accommodate up to 5 fishing rods and a stern light. Water resistant, you find pockets for plenty of gizmos, such as pliers, maps, etc... and to cap it off, the final neat feature is that it has a pocket in the front that is removable, converting into a waist pack, allowing you to take your gear with you should you hop off to wade the shorline or flats on foot.
MSRP $199

The Kingfisher Inflatable Fishing SUP from the Creek Company is quite the fishing platform. At 10' x 41" x 6" and only 31 pounds, the Kingfisher touts stability and rigidity and an ultra-convenient package that deflates into an oversized backpack. 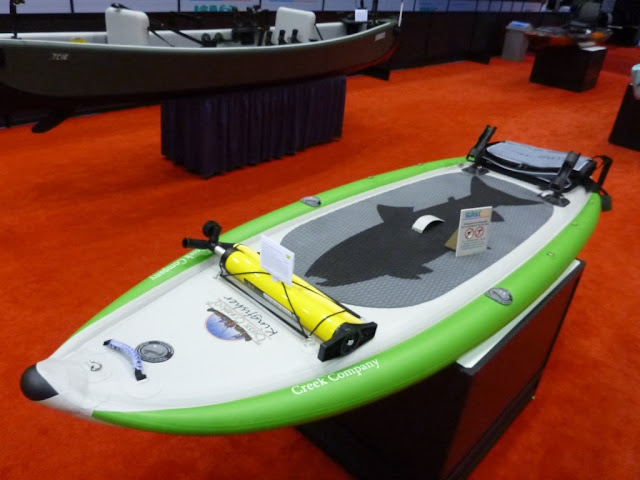 The best features on the Kingfisher are the multiple D-ring attachment points & bungee cords along the rails and deck and pre-mounted rod holders. This SUP is geared with one purpose in mind, catching fish.
MSRP $1299.99

Speaking of fishing SUPs, one that really caught my eye was the FishSUP from SwitchSUP. Now the inflatable board here looks like a really solid entry into the inflatable SUP market, but that's really not what I'm talking about, I'm looking at the box on the back. 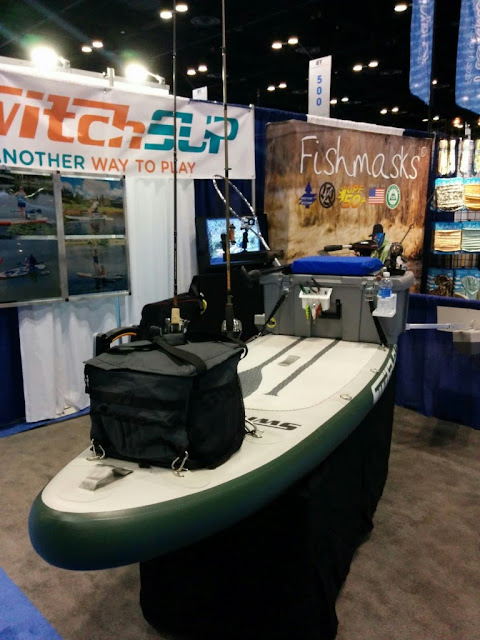 The FishSUP box is basically a cooler-sized plastic crate (not a cooler), but it has two outrigger pontoons coming out of the side for additional stability. As a person who is balance-challenged at times, I could see how those pontoons could be extremely helpful to anyone a bit intimidated to fish off of their SUP. 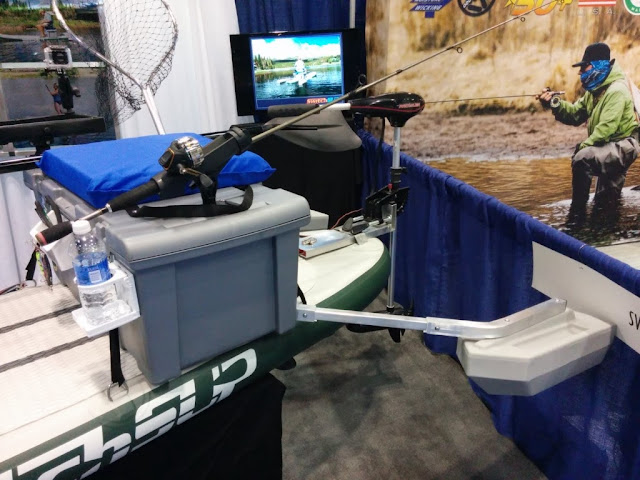 The crate also doubles as a seat and integrates a fishing rod holder, paddle holder, beverage holder, tackle box shelf, and holes for stakeout poles. Open the box and you'll find storage for tackle, PFD, collapsible paddle, you name it...and even has wheels for easy transport. The FishSUP works on most SUPs.
MSRP $495

It was good to see the TrueRec guys at the show. I had featured their DFP kayak on Troutrageous! 2 years ago when it was still in prototype stage and they were trying to raise money on Kickstarter to fund the project. While I don't think the campaign was successful, they continued on and are ready to bring boats to the market! 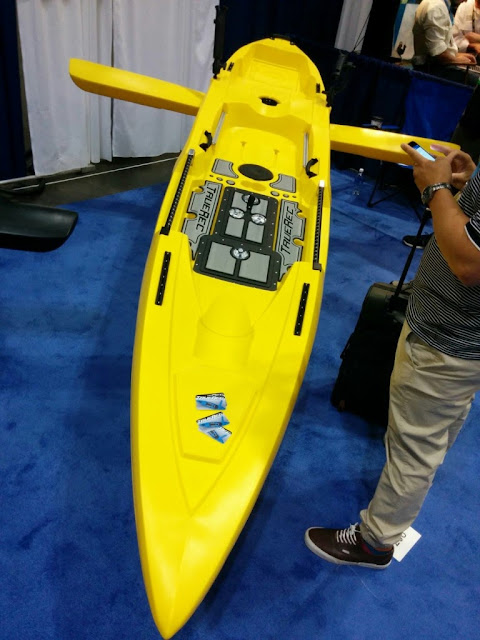 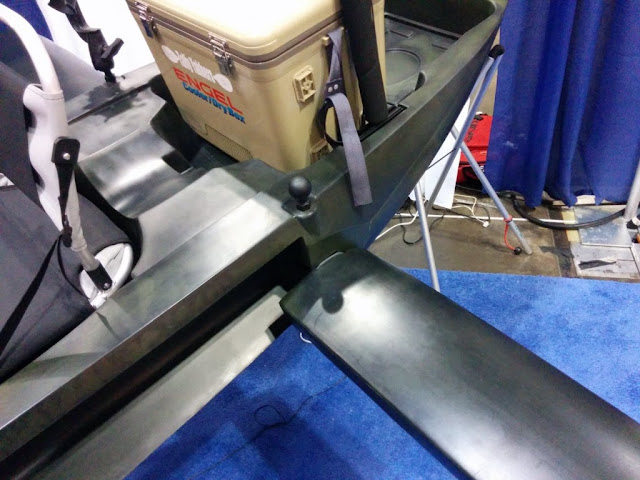 What makes the DFP unique are the concealed pontoons in the side which are easily deployable for extra stability on the water. These make this kayak an ideal for stand up fishing, or as a platform to dive from.
MSRP $1799

Winner of the 2015 "Best In Show" award in the boat/personal watercraft category on the IFTD side of the house, this Estrada Art adorned Live Watersports L2Fish SUP was a sight to see, (even though this picture doesn't do a good job of it)! 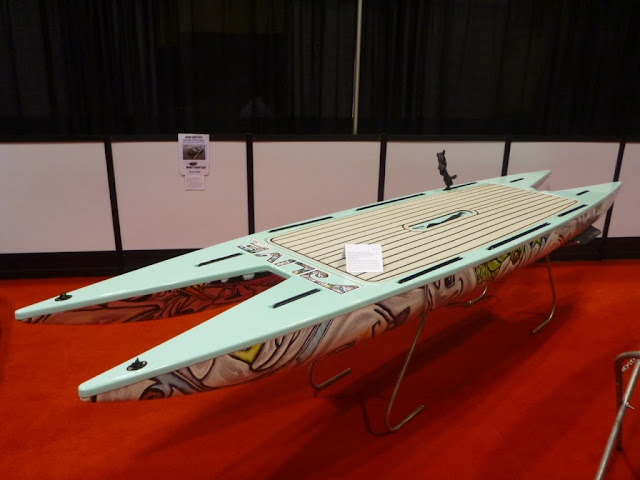 Personally, I really dig Eric Estrada's art, so this Signature L2Fish was a really cool collaboration project that takes the already capable catamaran-hulled SUP to an all new level.
MSRP $2699

Last, but not least, the eddyline C-135 YakAttack Edition Stratofisher Kayak...which happened to win overall "Best In Show" at the ICAST side of the house. 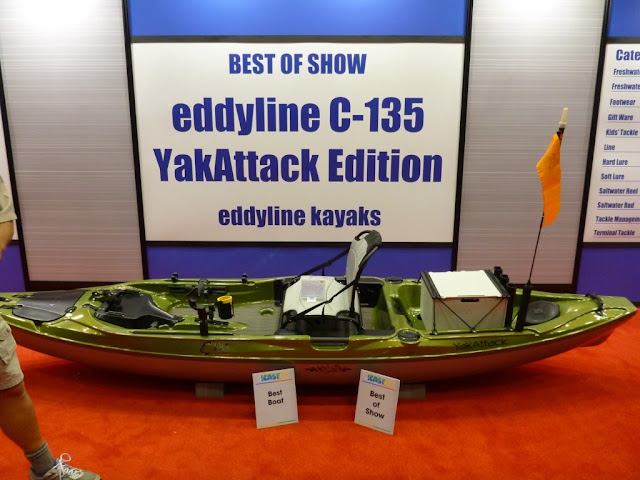 The C-135 is a 13.5' x  34" high-gloss thermoformed Carbonlite 2000 kayak that is relatively lightweight at 69 pounds, and boasts a 450 pound capacity. The standard version features a very open floor plan and a 4-position Cloud 10 comfort seat. The C-135 was designed to accept trolling motors, stakeout poles, and even a casting bar. 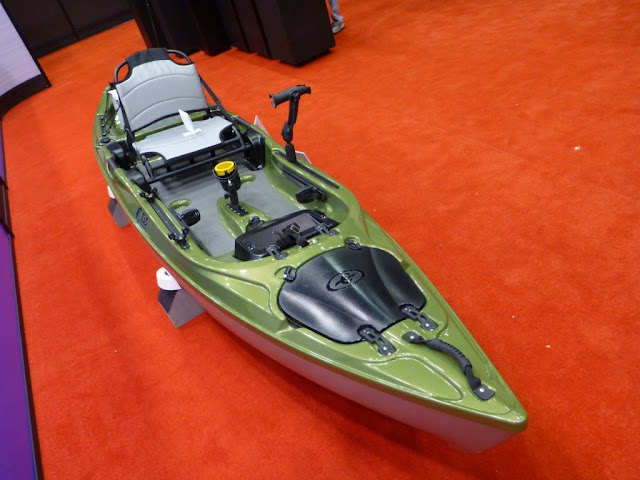 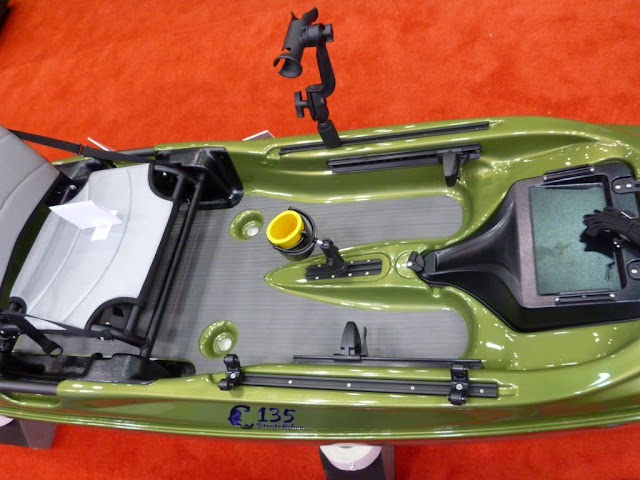 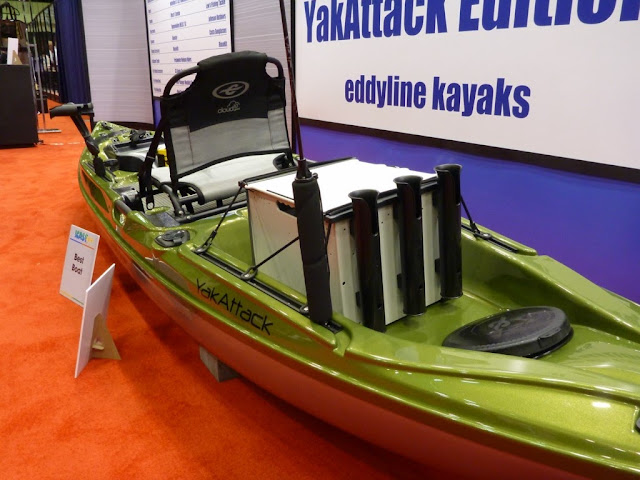 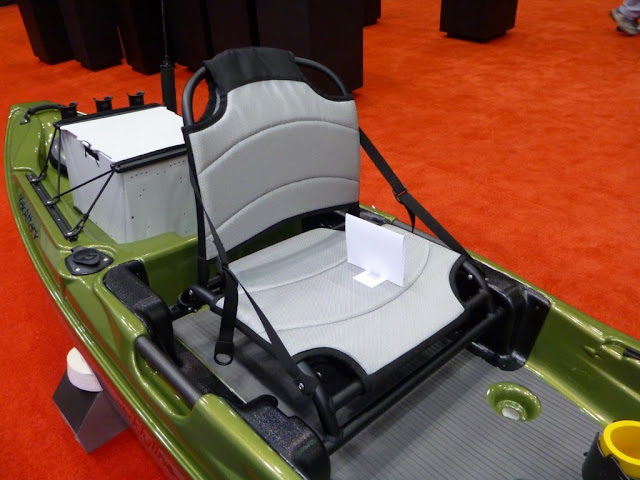 This special YakAttack edition of the boat comes with all of that, plus a ton more YakAttack accessories, including the BlackPak kayak crate, a VisiCarbon Pro safety light, a Zooka Tube rod holder, paddle clips, and several Gear Tracs for additional flexibility.
MSRP $2599


In closing, there was just so much to see and too little time, so I apologize if I missed a manufacturer or product you were curious about. I tried to keep this recap to the novel, notable, and new.

As you've probably noticed, I've embedded links to each of the manufacturer websites within each write-up, so if you're looking for more information on any of these products, please click through and pay them a visit!


This post is also being tagged as part of the recurring "The Quest For The Ultimate Fly Fishing Kayak" series; to view prior entries, click HERE.
Posted by Michael Agneta at 3:00 AM