So let me get this out of the way, I'm not even going to pretend like I saw all of the clothing, waders, and bags at the show. There was just a tremendous amount of it everywhere...far too much to document in about 5 or 6 hours of wandering a show floor.

Since time was of the essence, a lot of what I saw was either at the various "New Product Showcases" somewhat removed from the show floors, or at booths I passed by where I happened to see a bit of a break in the action. Booths like Costa, Simms, & Patagonia were pretty much packed the entire day, so sorry if I missed your manufacturer of choice.

I did happen to see more than my share of cool stuff, which I'll highlight below.

My winner of "BesT! in Show" award in 2014 went to the Hodgman Aesis Sonic waders, the first step in the company's re-branding effort from your "uncle's rubber hippers" into high-performance, technology filled waders. The evolution continues with wading apparel that was teased last year, but fully unveiled this year. 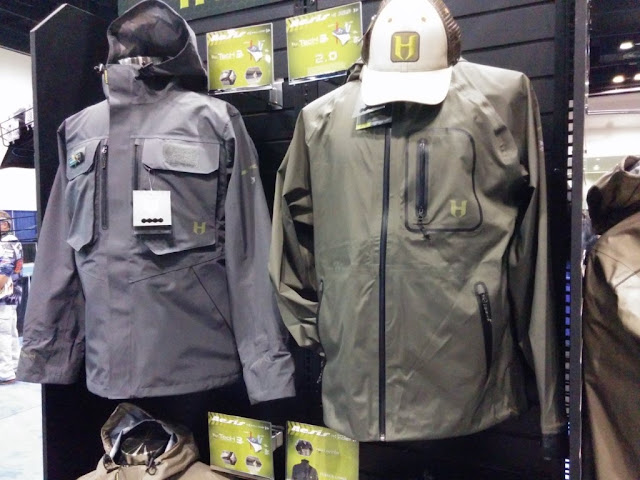 The 3 jackets shown above are of the Aesis HyperDry Down Jacket (first photo), Aesis Shell Jacket (bottom left), & Aesis Wadelite Jacket (bottom right).  There is also a 3-in-1 combo jacket slightly out of frame at bottom.

They HyperDry Down jacket is exactly what is sounds like, a warm, down filled, lightweight wading jacket that is extremely water resistant. It touts the ability to keep you warmer and dry faster when wet, even in the most extreme conditions.

The Aesis Shell is exactly what it sounds like, a breathable shell-style jacket that has some neat bells & whistles like large chest pockets and a magnetic fly patch, while the Aesis Wadelite jacket has Sonic 2.0 welded construction that eliminate the tiny holes that come with stitched & taped seams.

I've been really impressed with Umpqua's packs since I first got my hands on them last year. As a personal fan of slings, I focused my sights on two of Umpqua's latest, the Ambi-Sling ZS sling pack & the Bandolier ZS sling pack, both of which feature the Zero Sweep (ZS) concept.


So what's Zero Sweep? It's the idea that the pack is extremely streamlined and nothing hangs loose to get caught up on fly line, branches, you name it. All of your tools and accessories that might typically drape off the side from zingers have specific ports or sheaths to reside, so it makes your pack virtually snag-free, with nothing to get in the way of your fishing.

The Ambi-Sling ZS ($139.99) pictured in the next two photos, is a sling pack with ample volume of 1100 cubic inches for pretty much whatever you want to bring on the stream, 5 Zero Sweep ports, 2 tool sheaths, and 2 fly patch stations.  A fully padded shoulder strap balances the load. 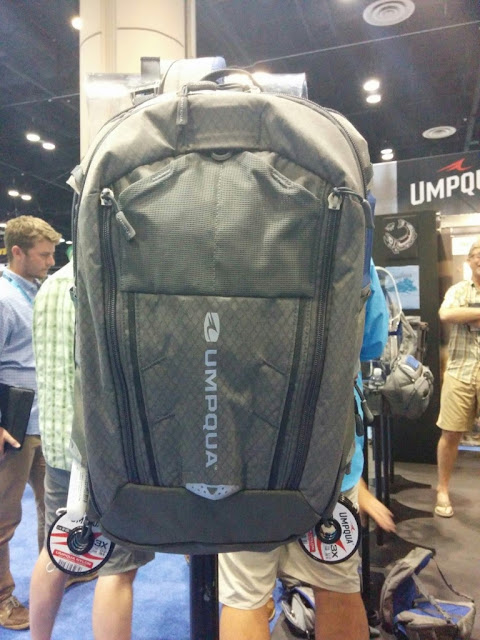 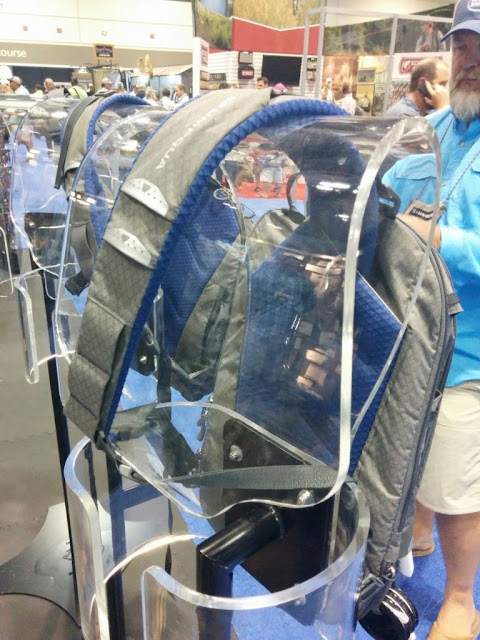 The Bandolier ZS is more of a minimalist's sling pack, heck it almost looks like a fanny pack you wear across your body instead of on your waist! Like the Ambi-Sling, it too features Zero Sweep design, including two external attachment tabs, two sheaths, and two ports to keep all of your tools neat and tidy. The main compartment is big enough to hold two large fly boxes, and there are two smaller side pockets for odds & ends. The Bandolier ZS will retail at $69.99 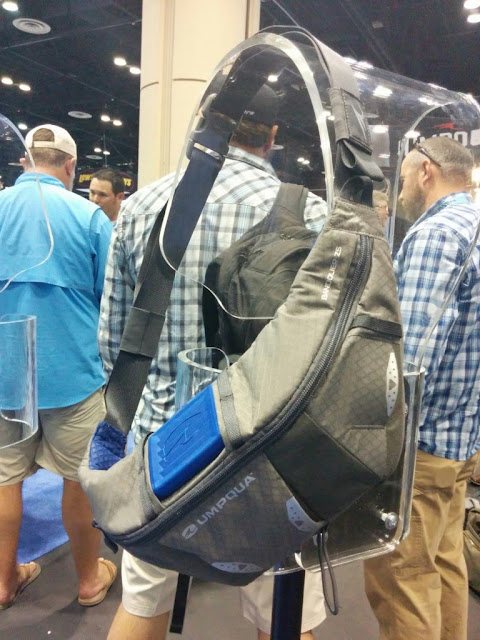 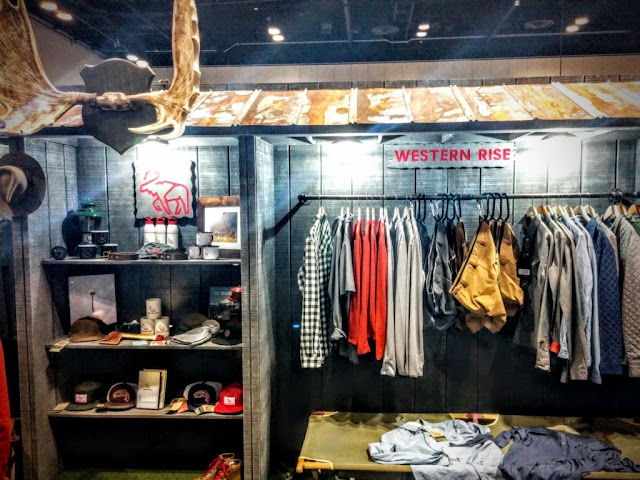 Prior to the show, I only knew of Western Rise from Instagram photos. Western Rise is a generally new to the scene technical apparel company with what they call a "timeless aesthetic." While it's not really my fashion look of choice (perhaps a touch "hipster,") I definitely respect what these guys have put together and can appreciate a solid apparel line when I see one. 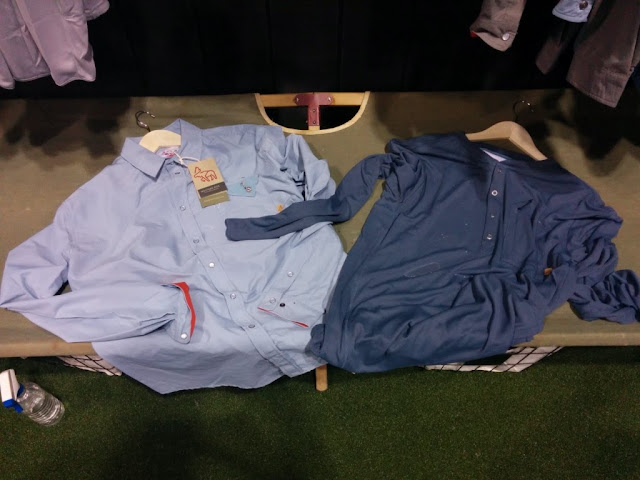 The Bodie Button Down (left) & Hartsel Henley (right) are two of the key pieces in the line. If you look closely on the Hartsel, you notice standing water pooled in the midsection. Western Rise was displaying how water resistant their garments are. I was impressed by the fact that both tops still maintained a nice soft "hand", not overly stiff like one might think a water-repellent treated fabric might feel. 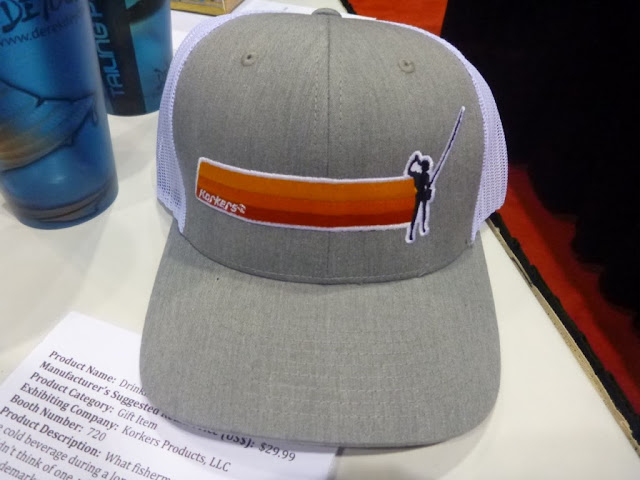 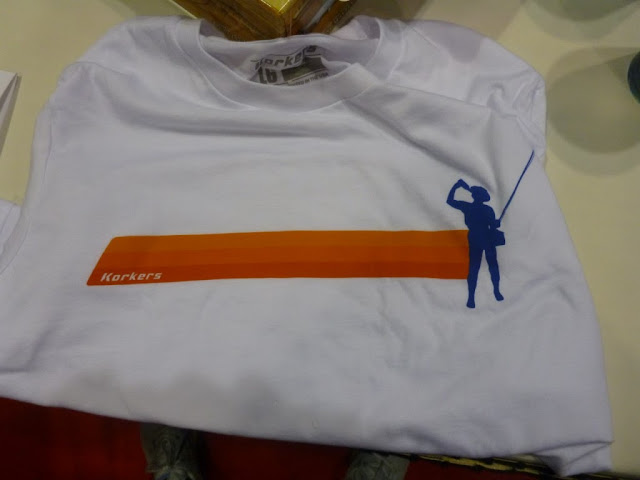 
A TRIO OF WADING BOOTS

Here's a quick rundown of 3 new wading boots, including one that won 2015 IFTD "Best In Show" in the boot category. Can you guess which one? 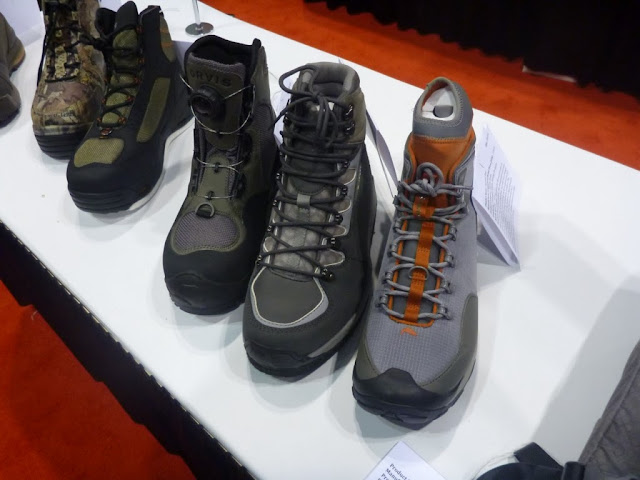 Of the 3 boots in the foreground, the boot to the left is the Orvis BOA Pivot Boot. According to Orvis, the Pivot has been designed for comfort and safety, and of course features a BOA closure system for easy on-off. The Vibram Idogrip rubber sole also employs a random orientation of cleats to prevent slipping at any angle. MSRP $199

The center boot is the Patagonia Ultralight Wading boot. The Ultralight is exactly that, constructed of quick-drying, lightweight synthetic leather and a quick draining mesh. Understanding the various needs of anglers, Patagonia will offer the Ultralight in both felt or rubber soled versions. MSRP $189.

The boot on the right is the boot that won Simms "Best in Show," and is unique in the fact that it is designed specifically for wet wading! The Simms Intruder has an integrated neoprene bootie that is intended to be worn barefoot. While the boots can be worn with neoprene socks, the bootie serves the same purpose, keeping out debris and maintaining blister free comfort. The outsole is constructed of Vibram Megagrip rubber for traction on both wet and dry surfaces. Plus, it's just pretty cool looking, and that's what's really important, am I right? MSRP $179.95.

I was pleasantly surprised by some of the gear I saw from Under Armour. I knew they were growing their footprint in the fishing category, but they appear to have executed three new fishing items extremely well. None are really fly fishing, but two could definitely be used by fly fishermen.

The first of the three (which might be my favorite) is the Drainster Fishing Shoe. Shoes like this are not really new, Columbia makes a very popular pair for example, but few combine the look with the (perceived) performance. The selling point to this shoe is clearly the rapid draining midsole combined with a mesh upper, which would be ideal for many water activities, including surf or kayak fishing. MSRP $84.99. 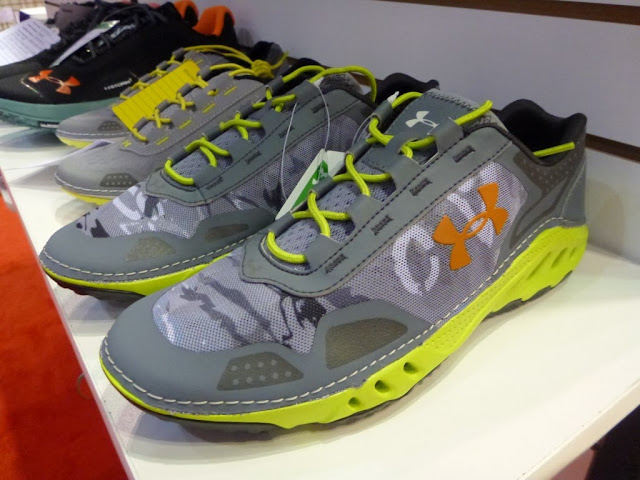 The next one kinda puzzles me, but whatever...

This really poofy soled fishing shoe is called the Fat Tire. I don't really know why you'd want such a bulbous sneaker, but Under Armour claims it's "designed to take you farther so you can fish harder." It's got memory foam on the inside, clearly for comfort (perhaps aimed at folks standing in a boat all day?) and a Michelin Wild Gripper rubber bottom for traction. It's definitely unique, and at a price-point of $149.99. 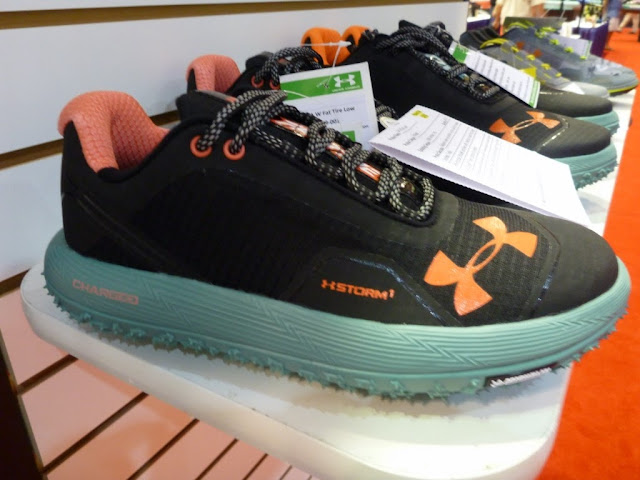 Last but not least is the UA Fish Day Pack, which cosmetically is pretty darn sweet. Fully functional for fishing, this pack has water resistant Storm 1 technology and a PU covered bottom panel for abrasion resistance. At a large 1750 cubic inches it holds a lot, and keeps it organized in several storage compartments. Should you use this more as a fishing travel bag, it also has an internal laptop sleeve that holds a 15" laptop. MSRP $99.99 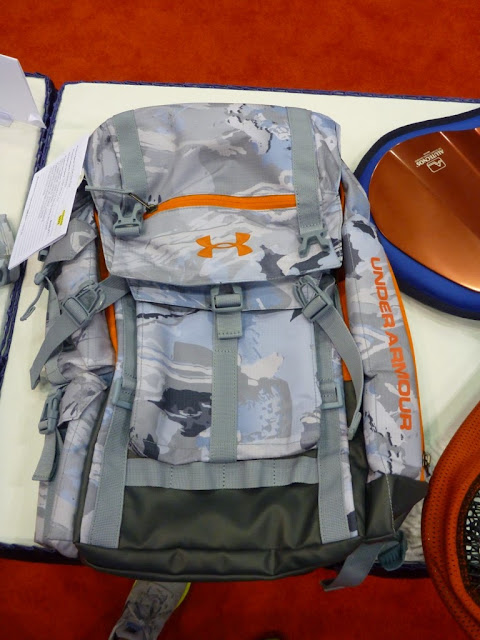 Other manufacturers of note that you're probably going to want to keep an eye on with great presences at the show were Huk, Breathe Like A Fish, Flood Tide Co., Rep Your Water, Vedavoo, Fincognito, Kast Gear & Souplefly... However, at this point, I've most certainly apparel, waded, & packed you out, so I'll stop while I'm ahead.

As you've probably noticed, I've embedded links to each of the manufacturer websites within each write-up, so if you're looking for more information on any of these products, please click through and pay them a visit!

This is the fourth of six new product overviews from last week's ICAST / IFTD event. If you'd like to see the other entries, please click HERE.
Posted by Michael Agneta at 3:00 AM