Tenkara (& Rock Hopping) On The Fly 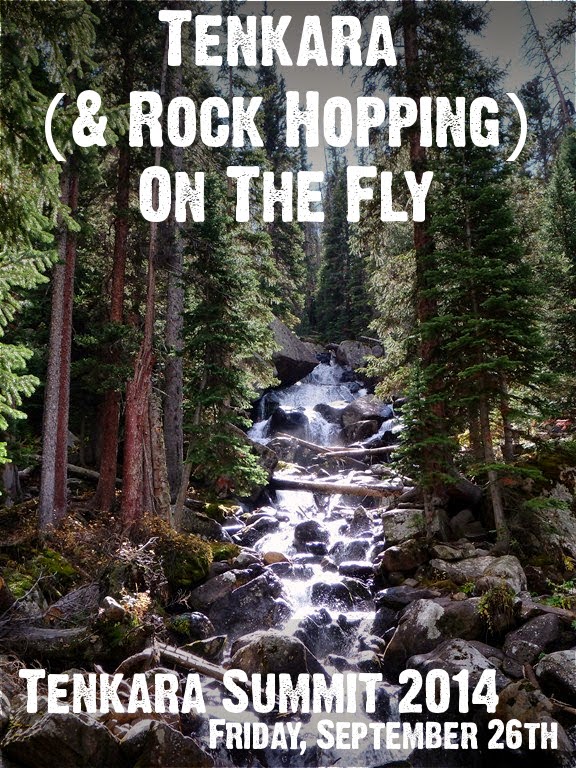 After a great afternoon of fishing with Rob on Thursday, I was extremely excited to cash in an offer to go fishing with Karel Lansky (Tenkara on the Fly) on Friday.  Karel & I have been friendly online for several years, and briefly met out at the 2012 Summit in Salt Lake City, UT, however I was never fortunate enough to share some water with him.

Swinging by the hotel around 7AM, followed by a quick pit stop at Dunkin' Donuts, Karel & I sped off to our fishing destination of the day, the North St. Vrain Creek via the Wild Basin Trailhead (I think I got that right...probably not).  Karel was excited to try and get me a Greenback Cutthroat...while I was pretty thrilled just to be going after some colorful brookies...  (He later explained that brookies aren't as loved out West as they are in the East, they're considered invasive and have crowded out native species). 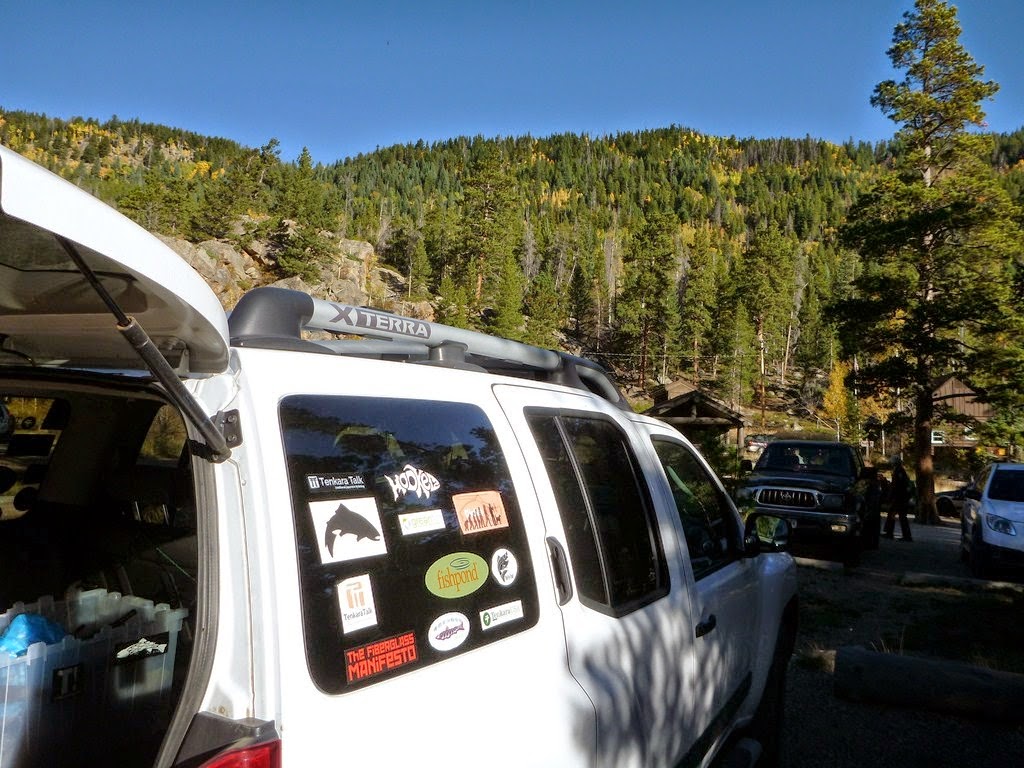 To say this area was picturesque was a total understatement.  I honestly wasn't prepared for the beauty of the cascading water as we waded the creek and walked the trail upstream.  While some of the tighter areas were somewhat similar to some water I've fished back East, the scale was just magnificent to behold.  Huge boulders, plunge pool after plunge pool, pocket water galore, big downed trees...damn, this was some beautiful water. 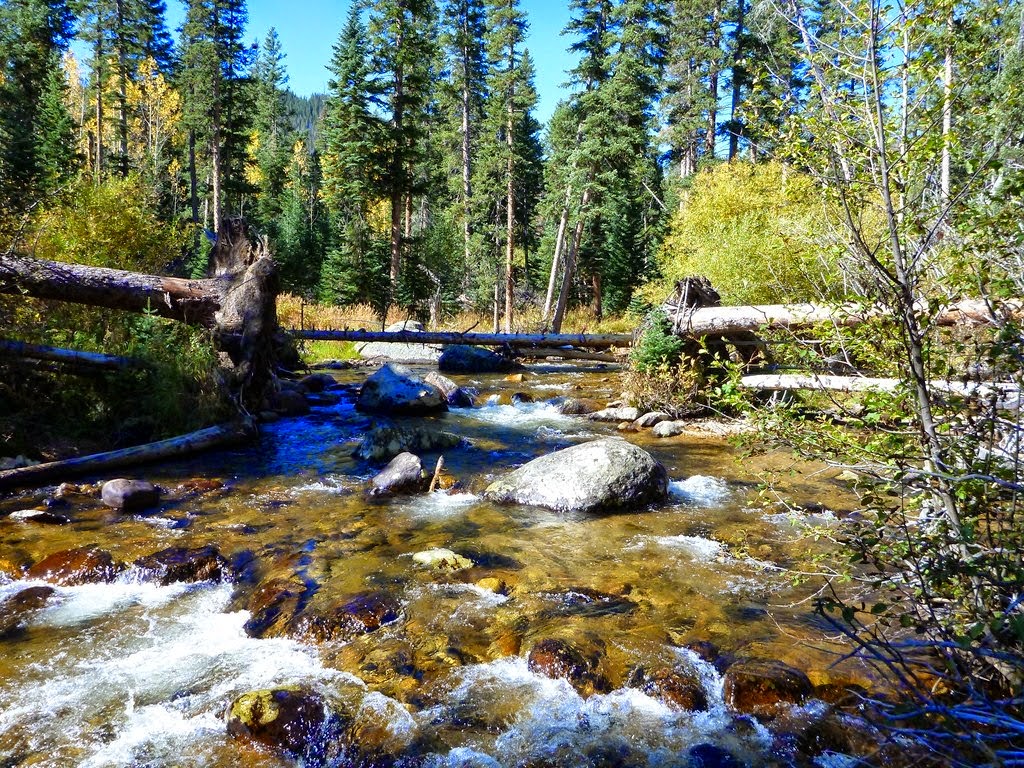 We started out the day beneath some falls, plucking out a few eager brookies.  Karel was kind of disappointed that the fishing was "slow," but I was having a blast.  He probably didn't understand that when I fish, the "numbers" are usually kept on one hand.  I think those fishermen out West are just spoiled!  That said, he was certain things would pick up once the sun got a little higher in the sky and things warmed up a bit.  He was right. 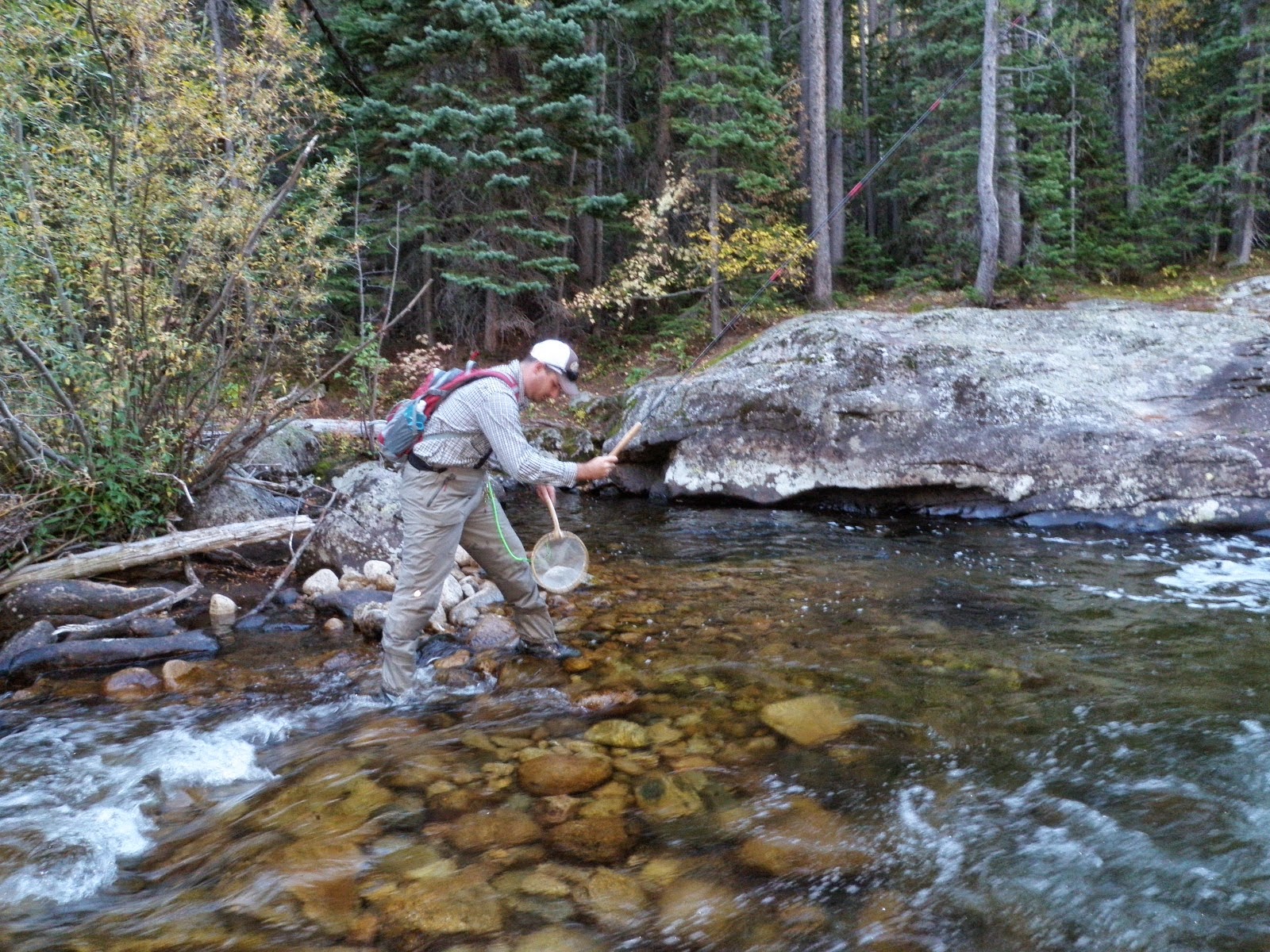 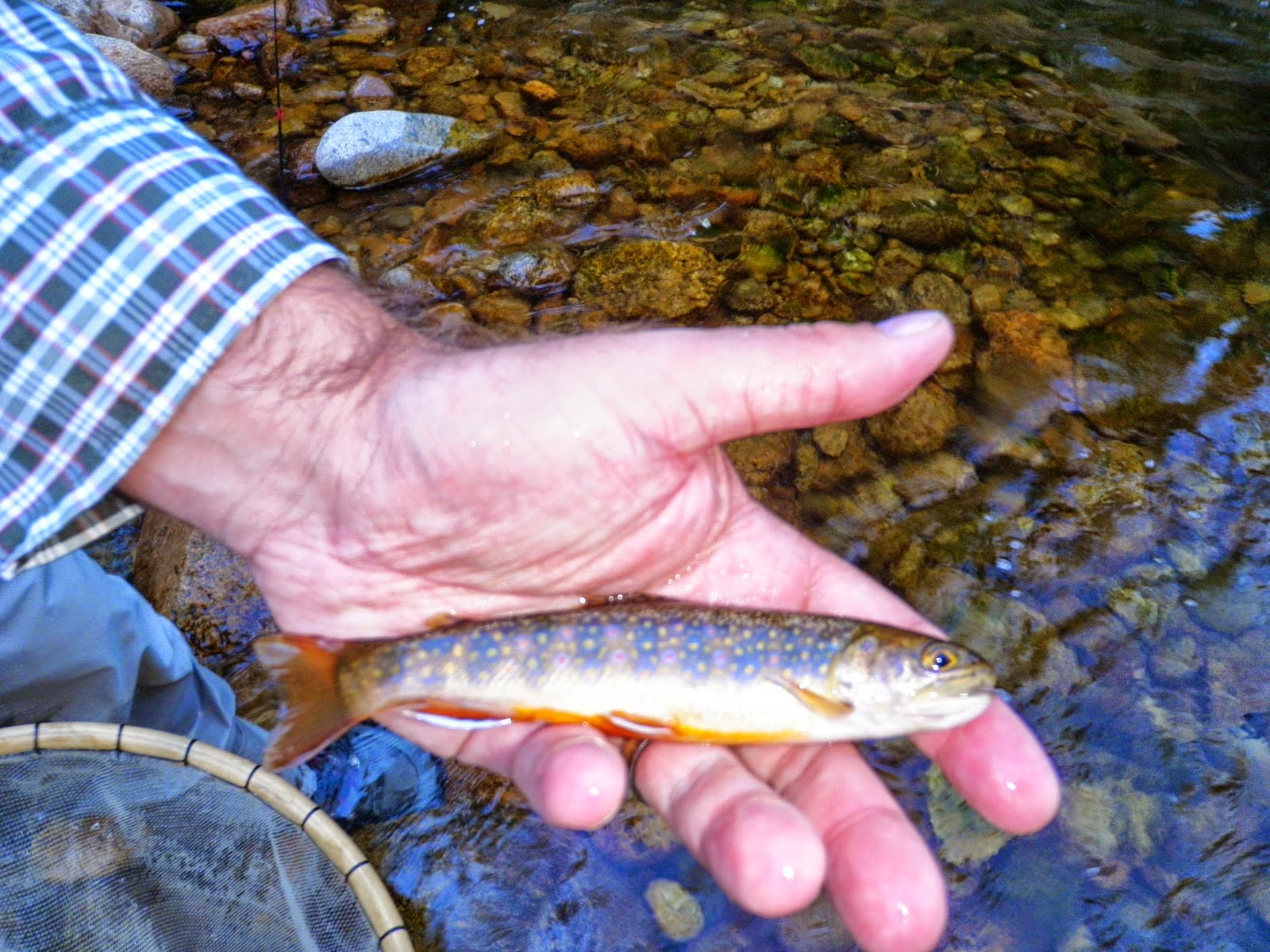 We continued to work our way upstream...sometimes taking turns working the same water, other times spreading out a bit and leaving some space in between.  It seemed the further we went, the better the fishing!  Brookie, brookie, brookie, brookie...certain runs and pools were just rapid fire.  I probably caught a dozen, Karel easily 2x that; it seemed every stretch we tried held fish, it was just a matter of figuring out how to get them to hand.  We were so into it, we really didn't even stop to take a lunch break...only hungrily chomping down trail mix and Clif bars on the go. 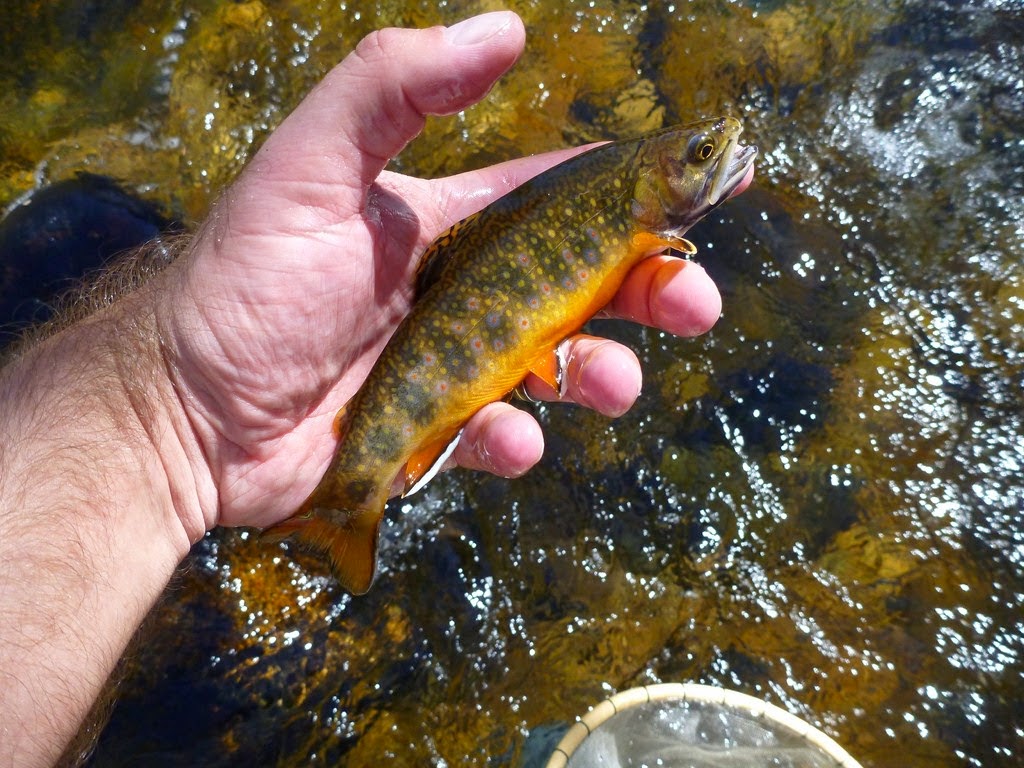 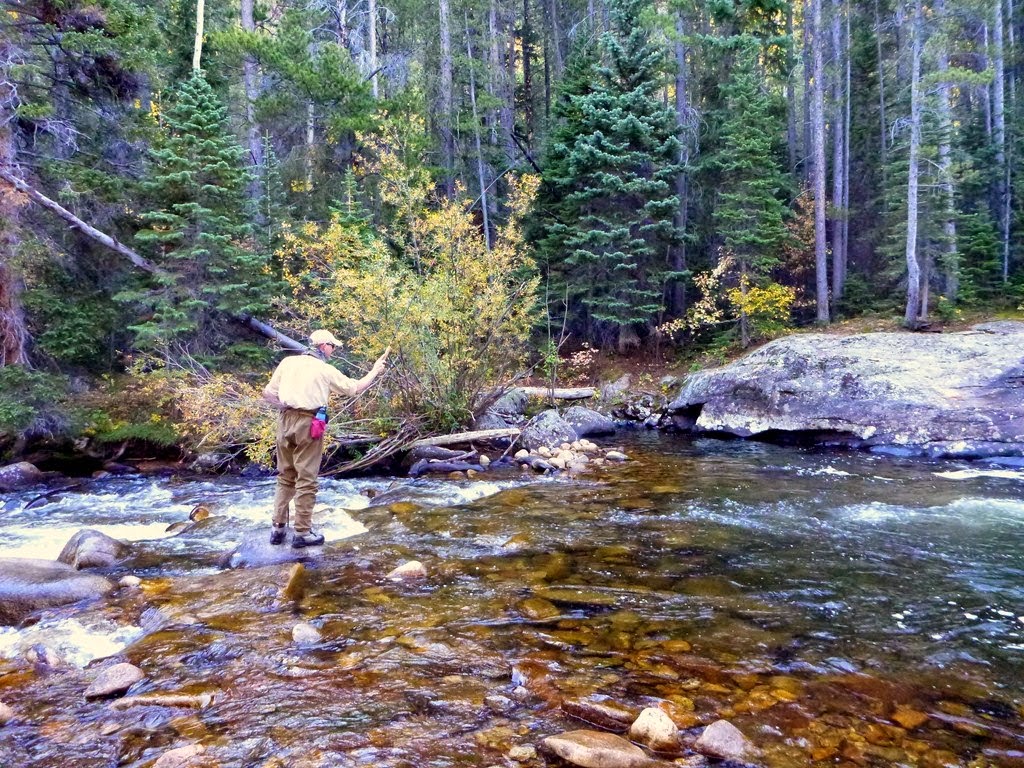 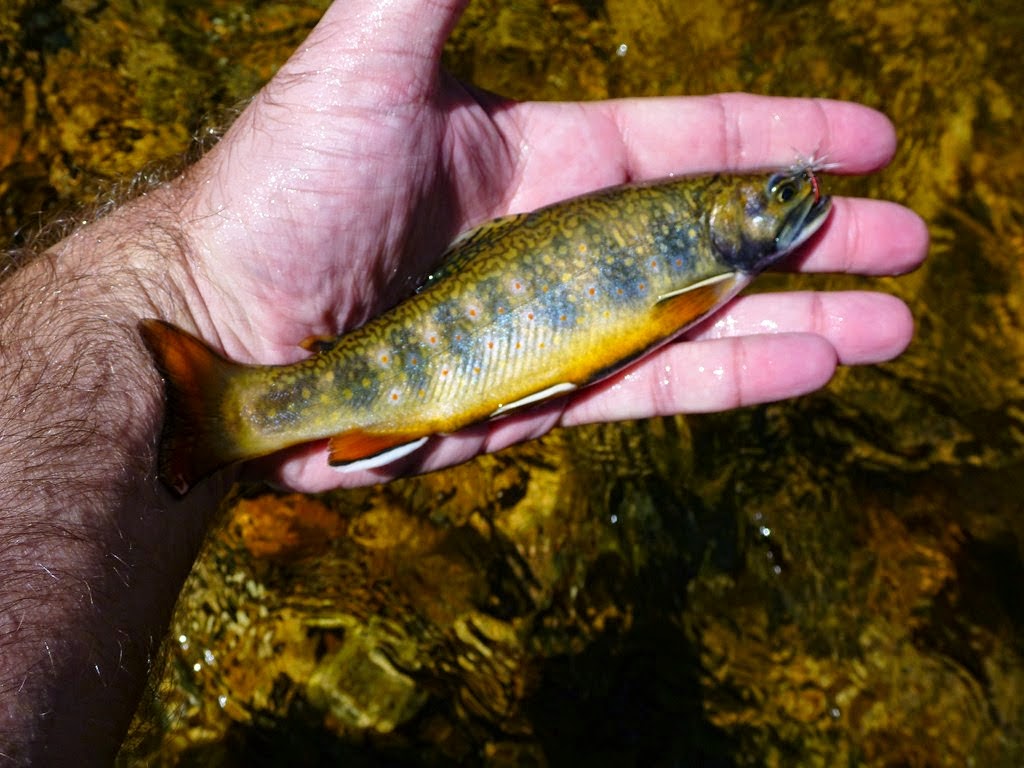 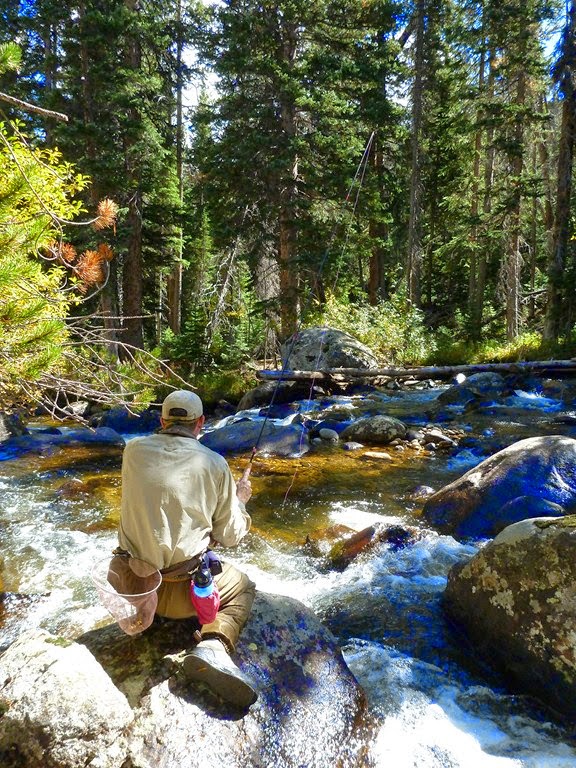 Then the trail went slightly vertical...and ummm...my sea level lungs were not quite ready for it.  Screw you altitude.  We kept going up because the higher up we went, the more likely we'd be able to get into some Greenback Cutthroat trout.  But once we got to where the trail leveled out again, I thought my lungs were going to explode.  Hunched over, I told Karel to fish at the first run while I composed myself and tried not to pass out. 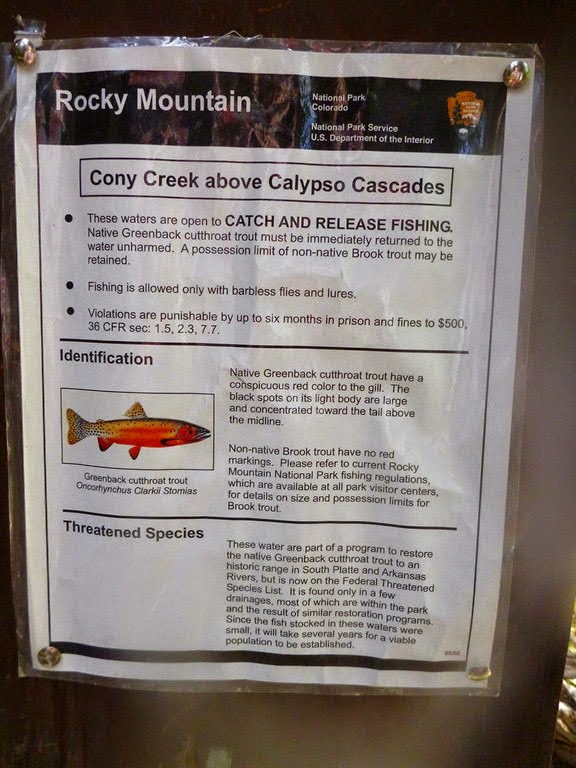 After a little bit I was fortunate enough to gather enough of my wits to get that first Greenback Cutthroat hanging out right beneath the froth of a small plunge pool.  I'll be honest, my head was still swimming, so I'm not sure I let out the proper amount of emotion once the fish was brought to hand.  It did feel damn good though, and was well worth the pain. 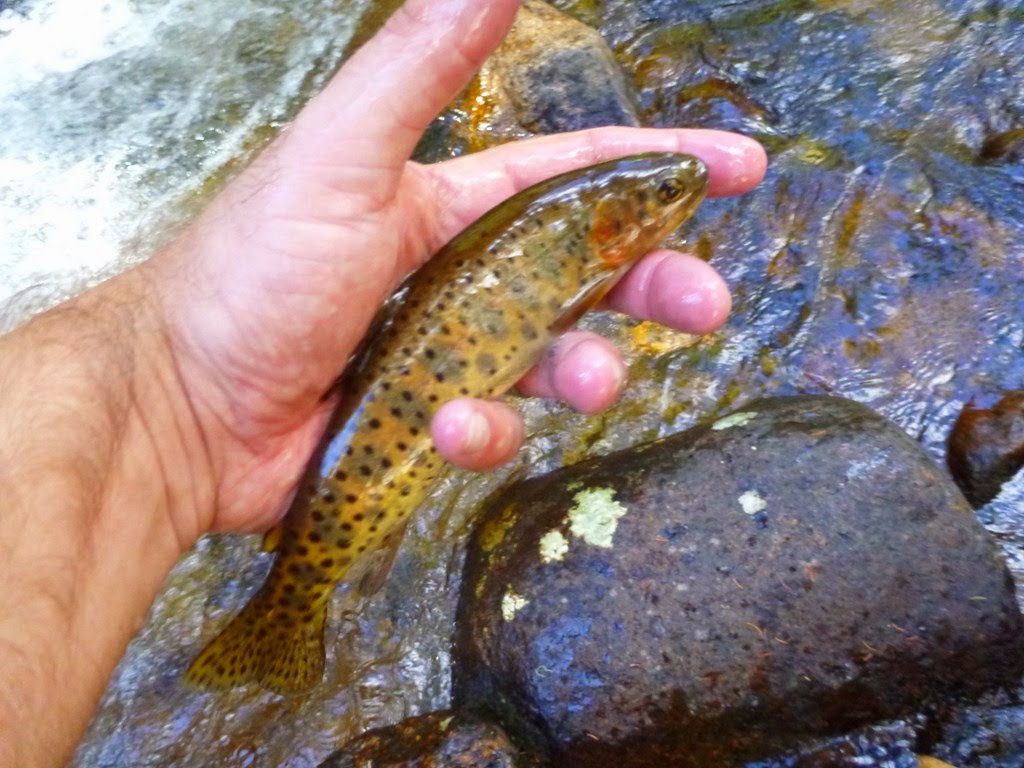 We continued up, as it was Karel's turn to catch his greenback cutt...which he did slightly after we reached Calypso Cascades.  It was a very nice fish, I wish the picture was better. 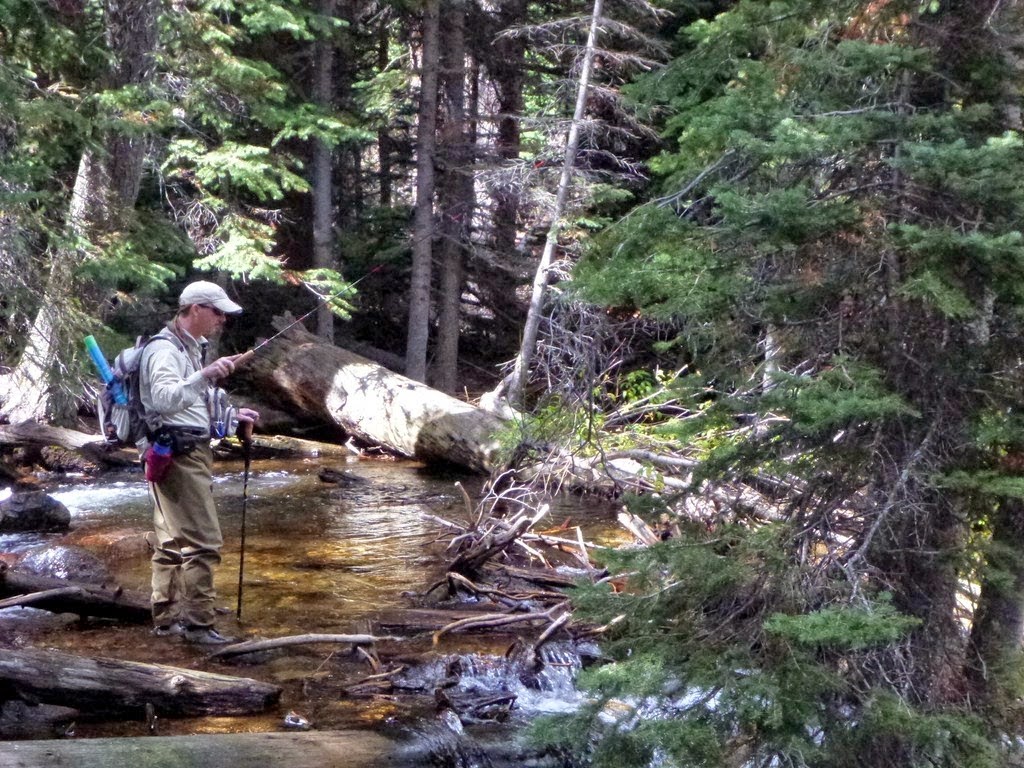 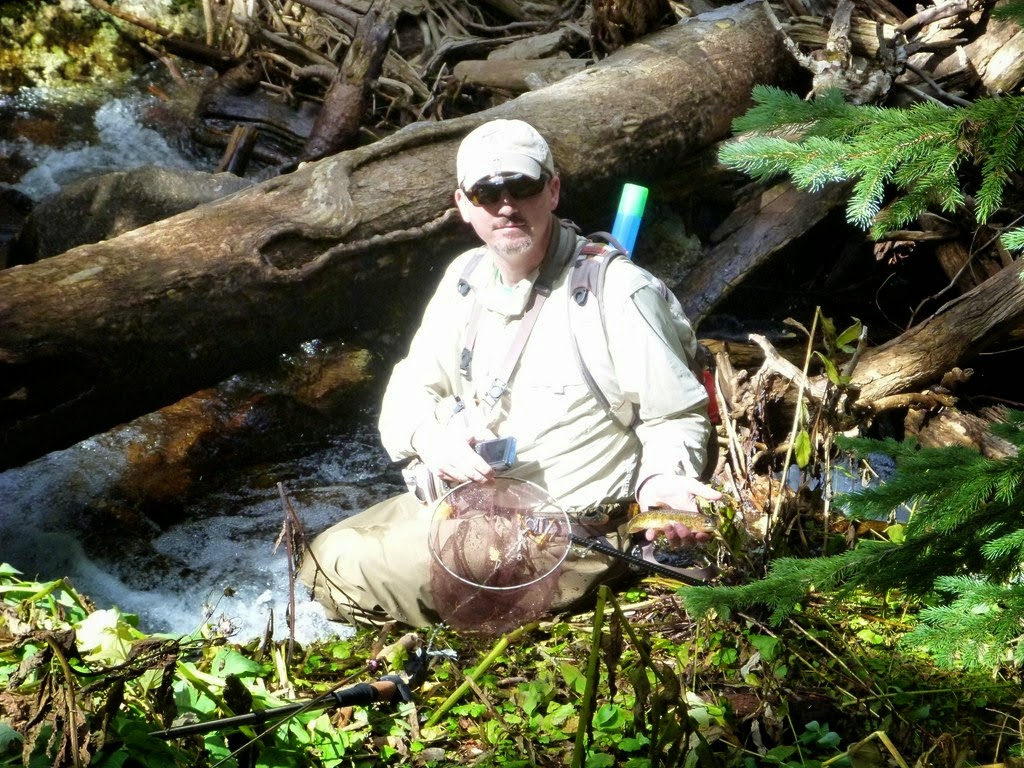 Karel also picked up another greenback cutt on the way back down in one of the most "pimp" ways to do so.  He basically walked in to a spot.  Cast once...and BAM...fish on.  It was so awesome to see, kinda like Babe Ruth calling his shot. 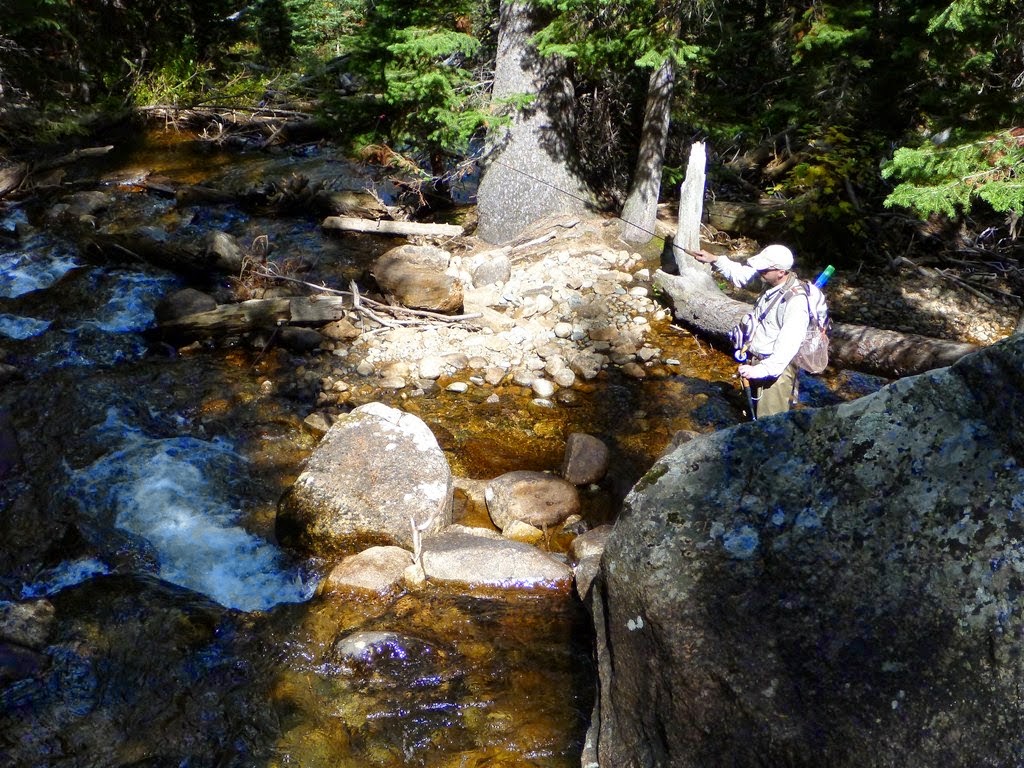 We fished our way back down to the car, each picking up a few fish along the way.  It was much easier hiking down than it was going up.  It was a pretty outstanding day of fishing that I won't forget very soon and I can't thank Karel enough for showing me around and playing the role of unofficial "guide." 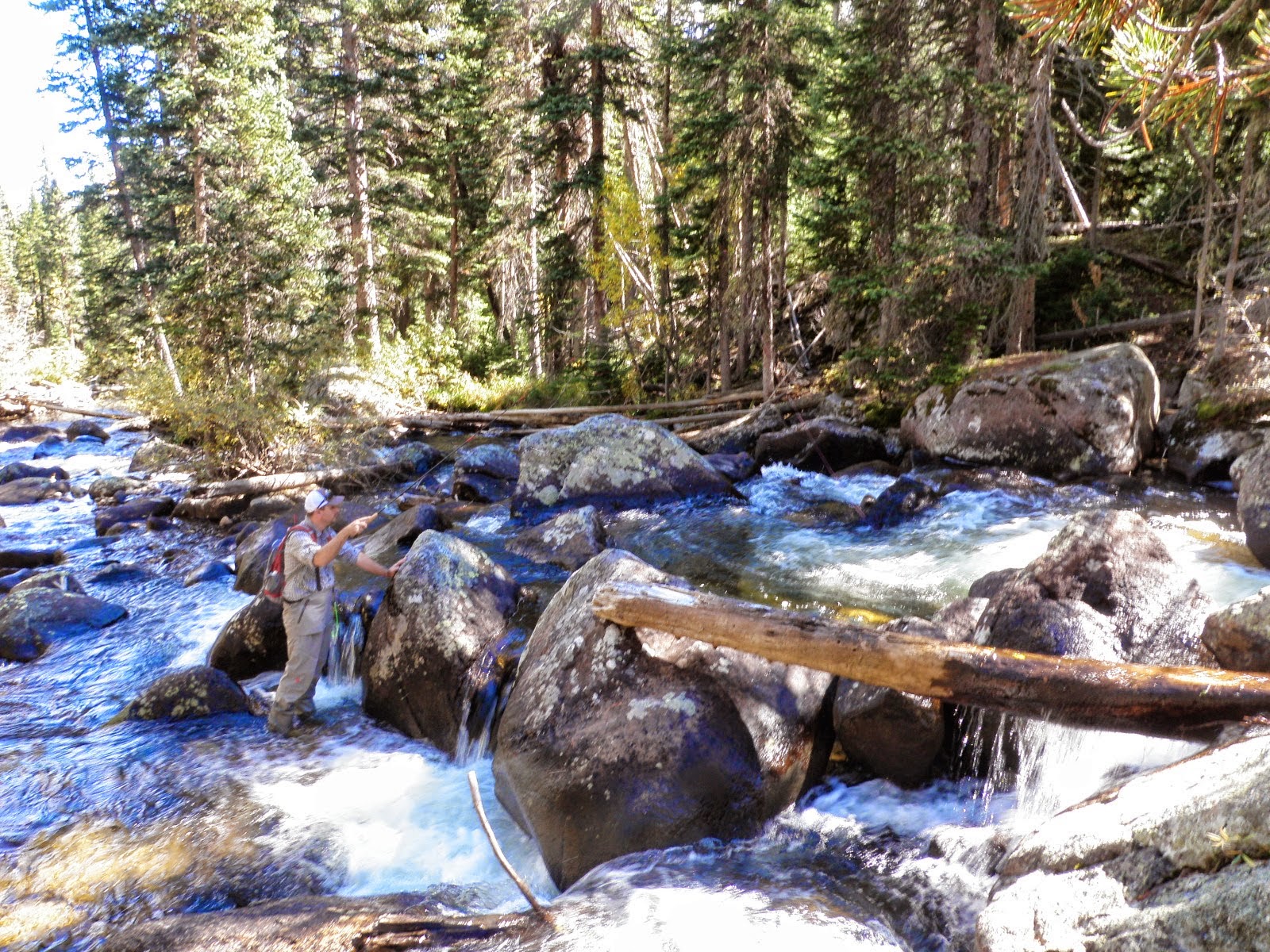 Karel is an awesome person to go fishing with, it was truly my privilege to spend some time on the water with him.  It was really fun to talk in depth to someone who has been in the tenkara "scene" as long as I have...knows most of the same people...and has seen tenkara (and its personalities) grow over the years.  If your ears were ringing two Fridays ago, it's probably because we were talking about you... :) 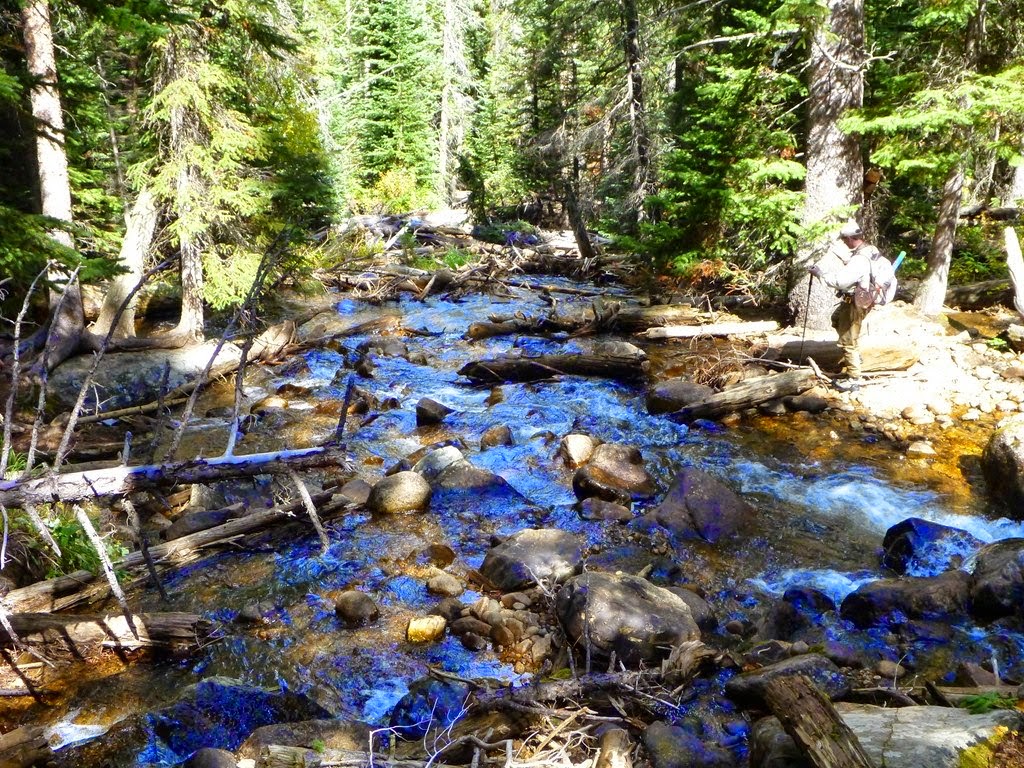 Most importantly, he's one of those people that not only knows his stuff inside and out, but isn't afraid to help point you in the right direction, when he could otherwise be off catching fish.  He helped me fine tune my cast, offered suggestions on altering my line length (which would continue to pay dividends later in the trip), literally fished me out of a deep hole when I slid on some rocks (yes, the water was cold) and even gave me some brass tacks and rubber bands so I could fashion an on-rod line holder!


The ride back to the hotel was probably just as enjoyable as the fishing.  Karel is a very entertaining story teller, and we traded tales of work, families, including our similarly aged daughters (who both happen to love Minecraft), and other random things...like the first three Star Wars movies (chronologically, not numerically) for example.  You don't usually get into that kind of stuff by reading someone's blog.  The hour+ drive just flew by.

Thanks for the awesome day Karel, I honestly could not have asked for a better afternoon hopping rocks, probing pocket water, and hiking trails.  I only hope I get to repay your generous hospitality someday!