Before I begin, I didn't spend too much time seeking out fishing reels at the show.  I personally have settled into a pretty spartan reel existence...in the fact that I prefer either click & pawl reels...or no reels at all (in the case of tenkara).

That said, since I do try to fish for larger fish every now and then, so I do understand the need for a solidly built reel with a good drag system.  My current fly reel of choice is the Cheeky Mojo 425, but there were plenty of others on display...so when it came to seeking out fly reels I generally strayed away from the big boys like Orvis, Sage, Abel, etc...and visited some smaller players you may (or may not) already be familiar with, such as...

The Fly Reel Company RB1 reel is a "big fish" reel.  The model below that has just very recently hit the market is a 12.6 ounce, 10/12 weight reel intended for salmon fishing...but is also completely saltwater proof so tarpon beware!

There are many selling points to this reel, such as solid block aerospace 6082 aluminum, stainless steel components, zero backlash anti-reverse, an exposed palming rim, etc... but the drag is the star.  The combination of composite and titanium discs inside the fully sealed drag produce up to 18 pounds of force and were heat tested in to exceed friction temperatures of almost 400 degrees Fahrenheit!  Basically, your drag should not fail.  Ever.

Now all this tech doesn't run cheap.  Currently available in the UK for £599, that's a little over $1000 here in the USA, but in this case, you do get quite a bit for the money. 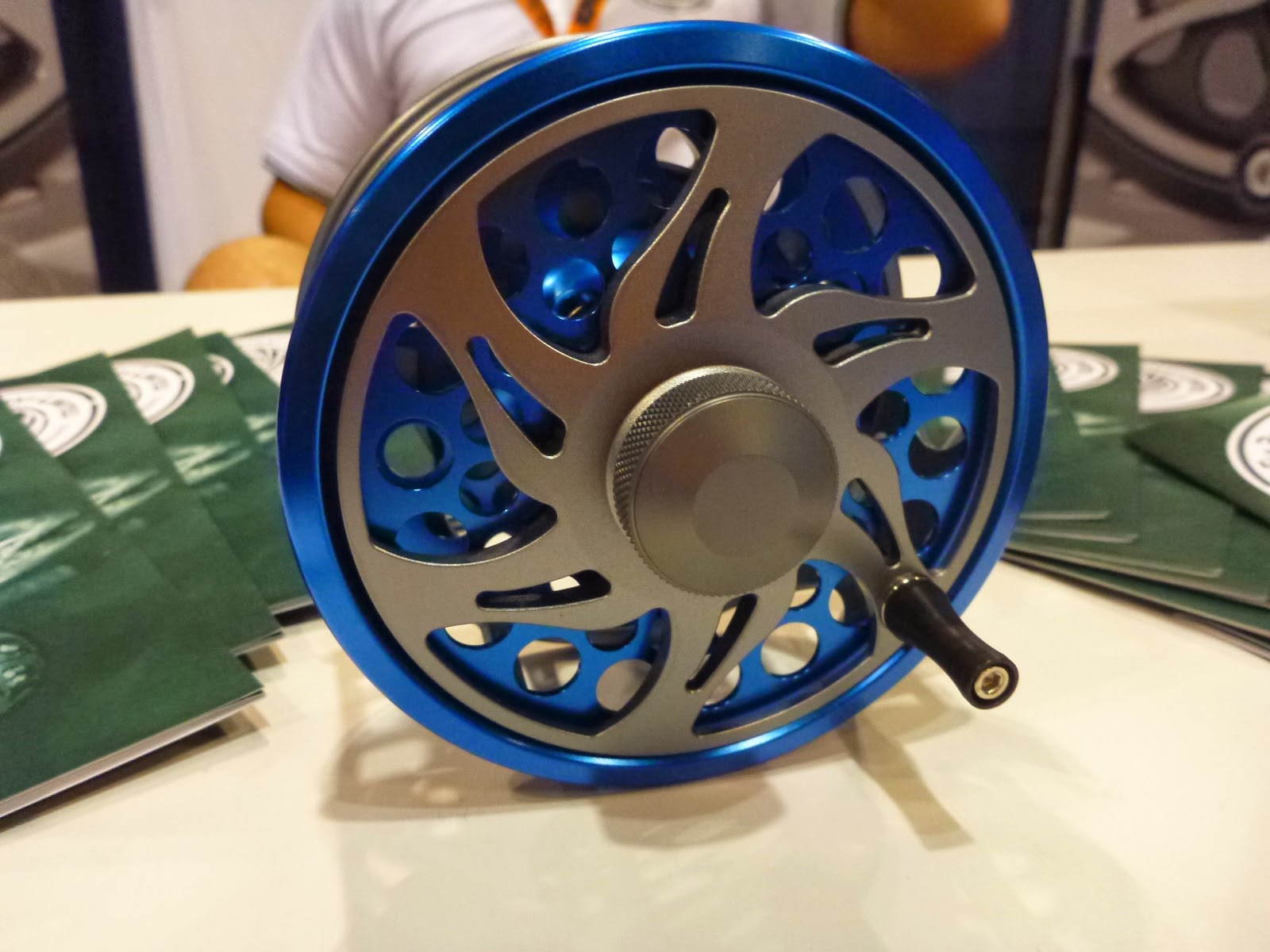 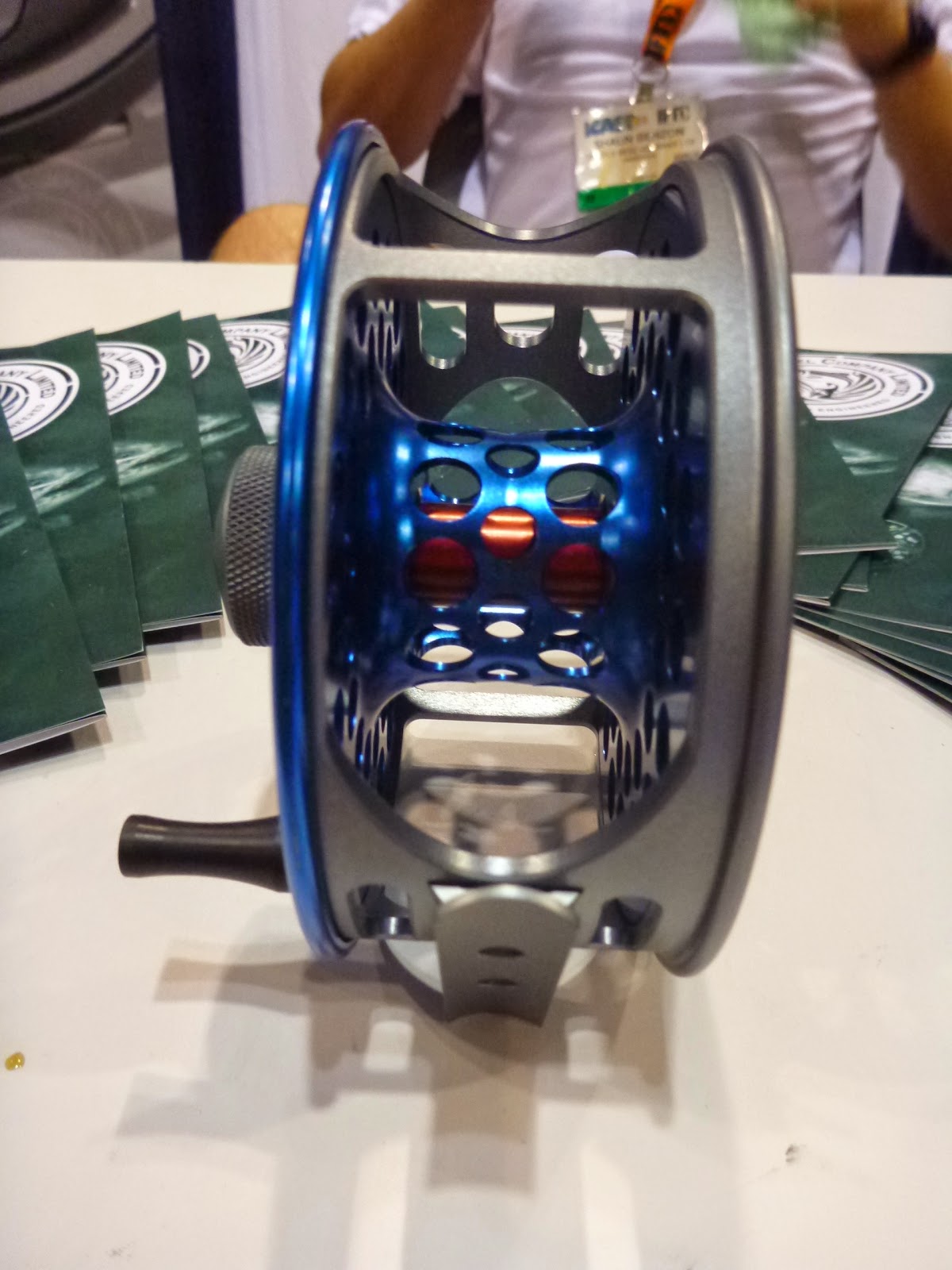 A slightly smaller RB1 in a 7/8 weight will also be hitting the market that has redfish and snook written all over it.  It will weight 8.3 ounces and carry a slightly lower retail than its big brother.

Both reels will come standard with the green colorway below, but as pictured in the reel above, custom colors like blue, red, etc... will be available.  Believe me when I say the pictures do not do this reel justice. 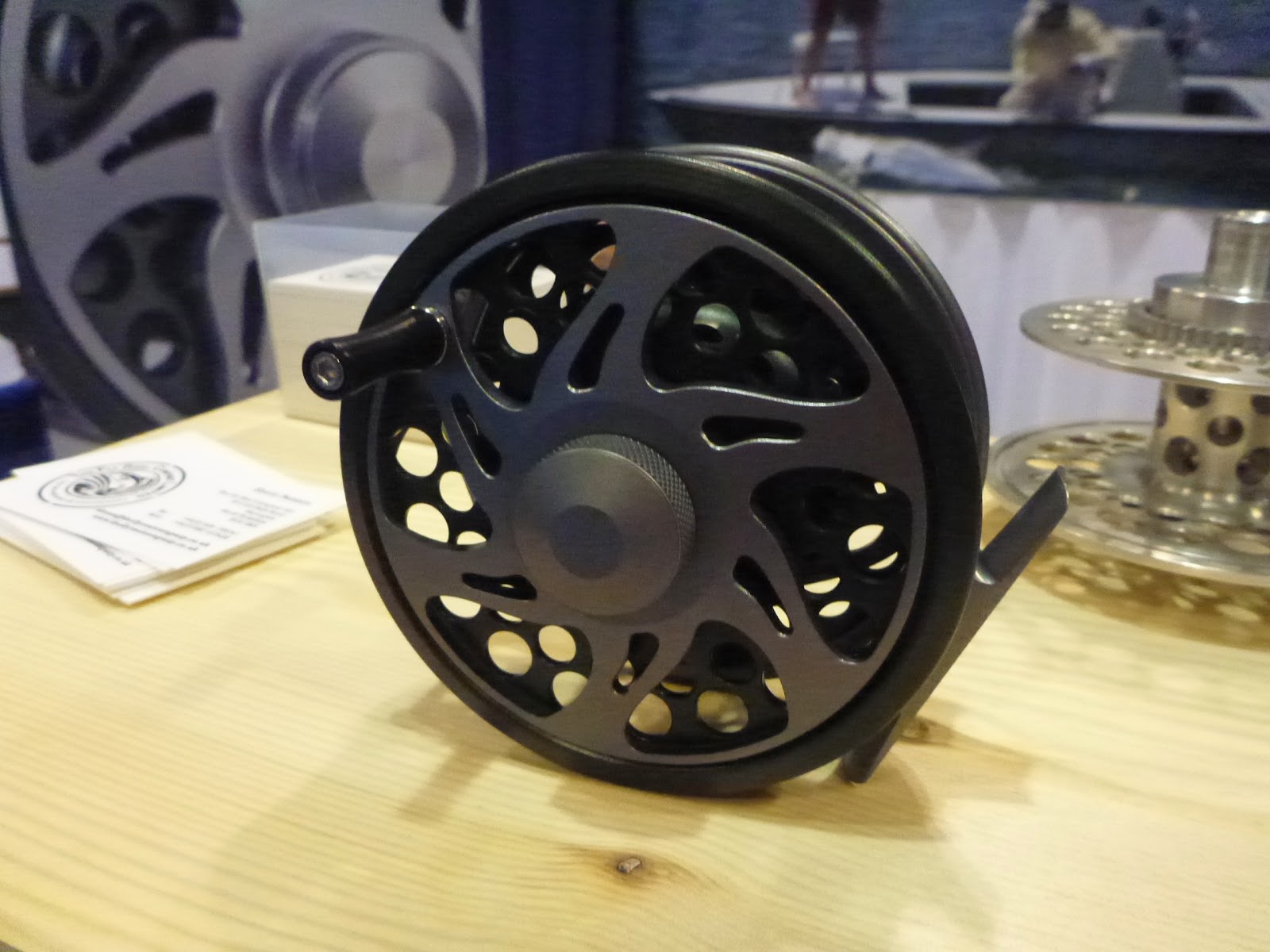 Also new to the fly fishing scene is Douglas Outdoors, a start up out of New York, that is being run by some long time industry veterans that helped build many of the fly fishing companies you are familiar with today.

There were two very different reels on display, the Argus and the Nexus.  I'll start with the Argus.

The Argus is a click & pawl reel that borrows heavily from a Hardy or Orvis CFO from a cosmetics standpoint.  Solidly made in the USA out of machined 6061 aircraft aluminum, I'm not going to say it is the equal of those reels (I didn't fish it, so what do I really know), but when you turn it, you do hear the correct "clicking" sound.  If you're into click & pawl reels, you know what I mean.  The Argus will have an MSRP of $395 to $450 depending on size. 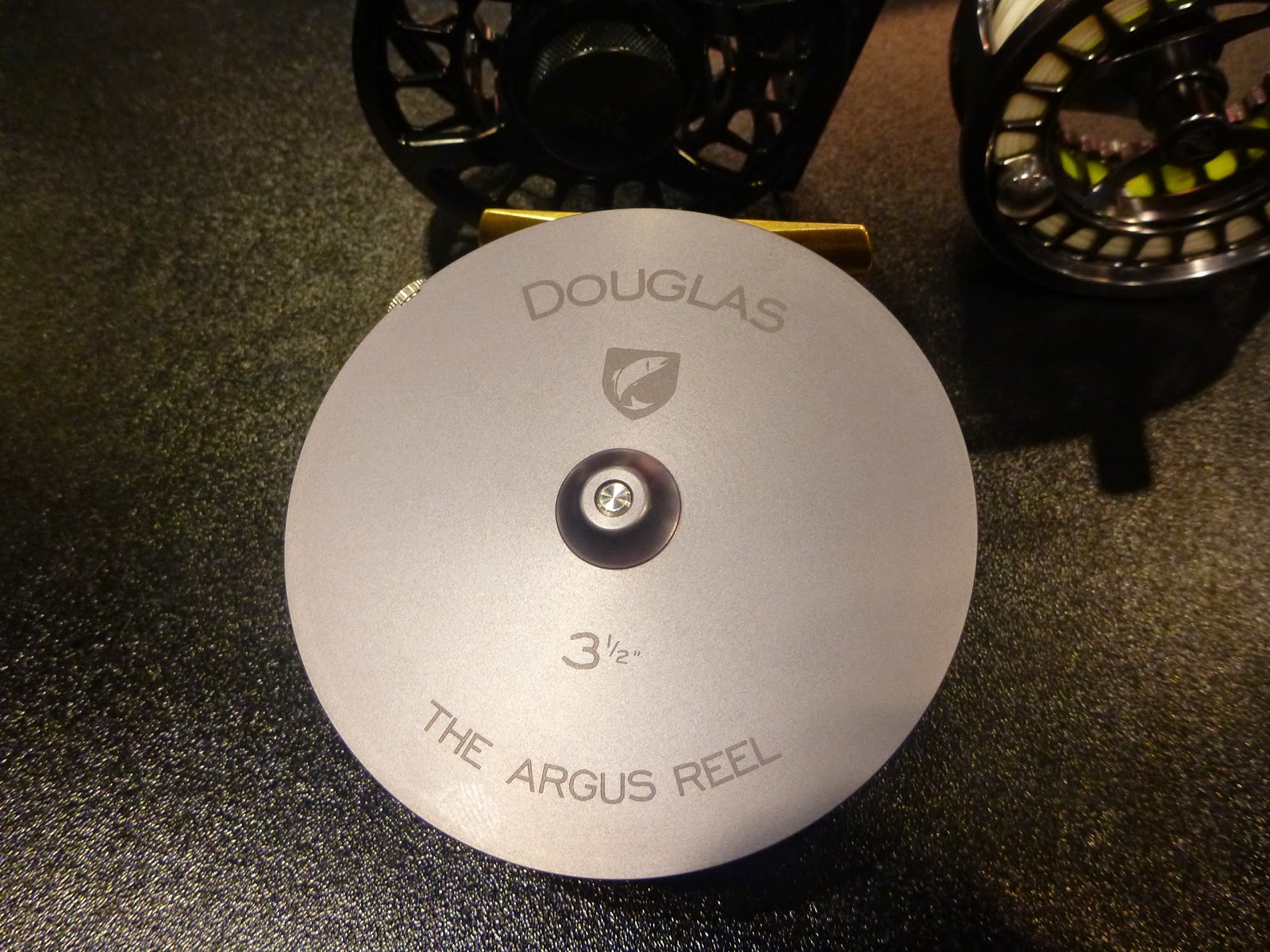 Whereas the Argus is the "traditional" looking reel that's made in the USA, the Nexus is the "modern" looking imported model.  Similarly machined from bar stock 6061 aircraft aluminum, this reel's major selling points are the wide ported, lightweight frame and spool, and sealed disc drag at a price point of only $250 (2/3 wt) on up to $350 (7/8 wt).  While nothing really stood out as new or innovative, with many of today's sealed drag reels up in the $500+ range, this reel should be popular. 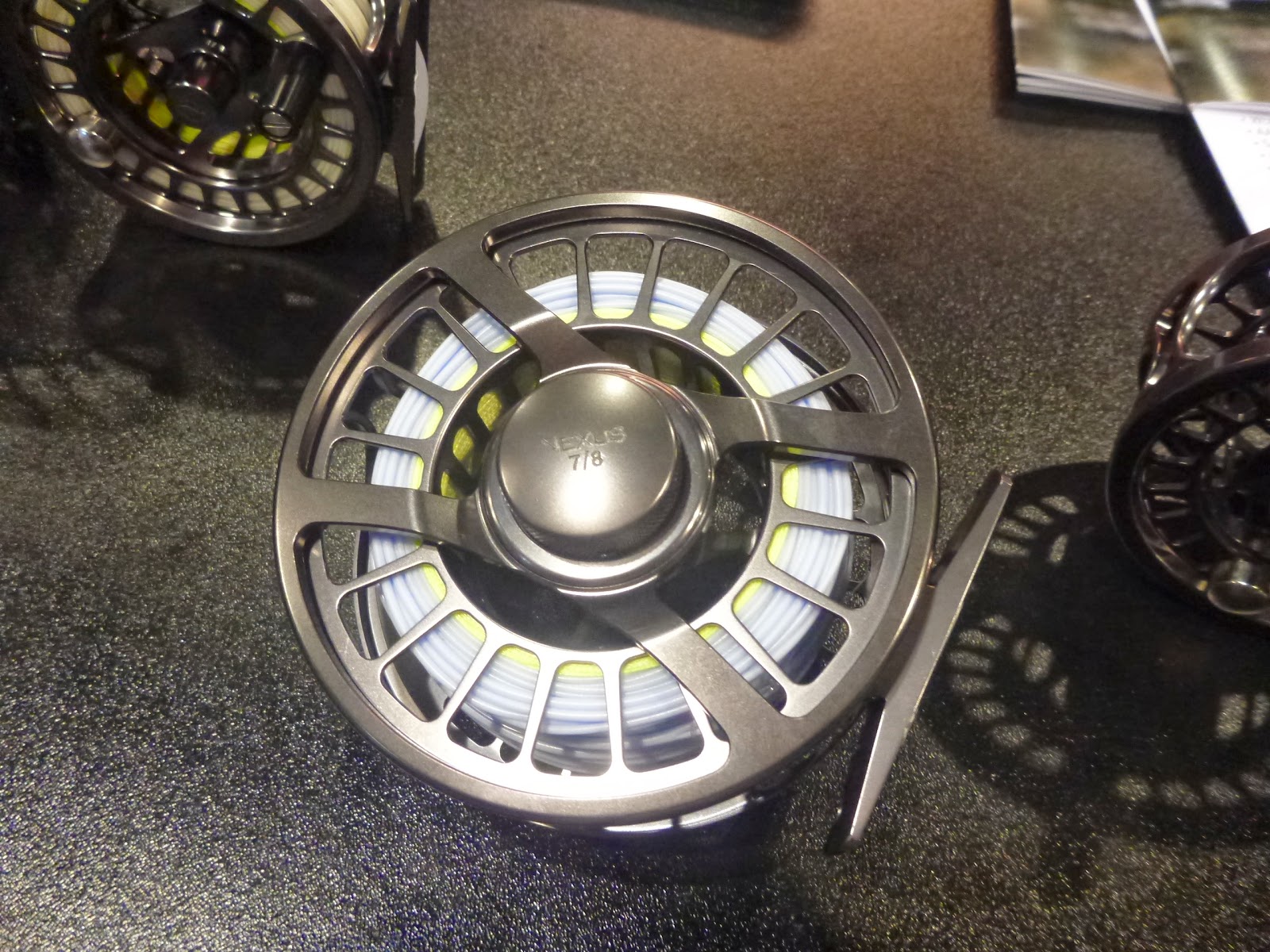 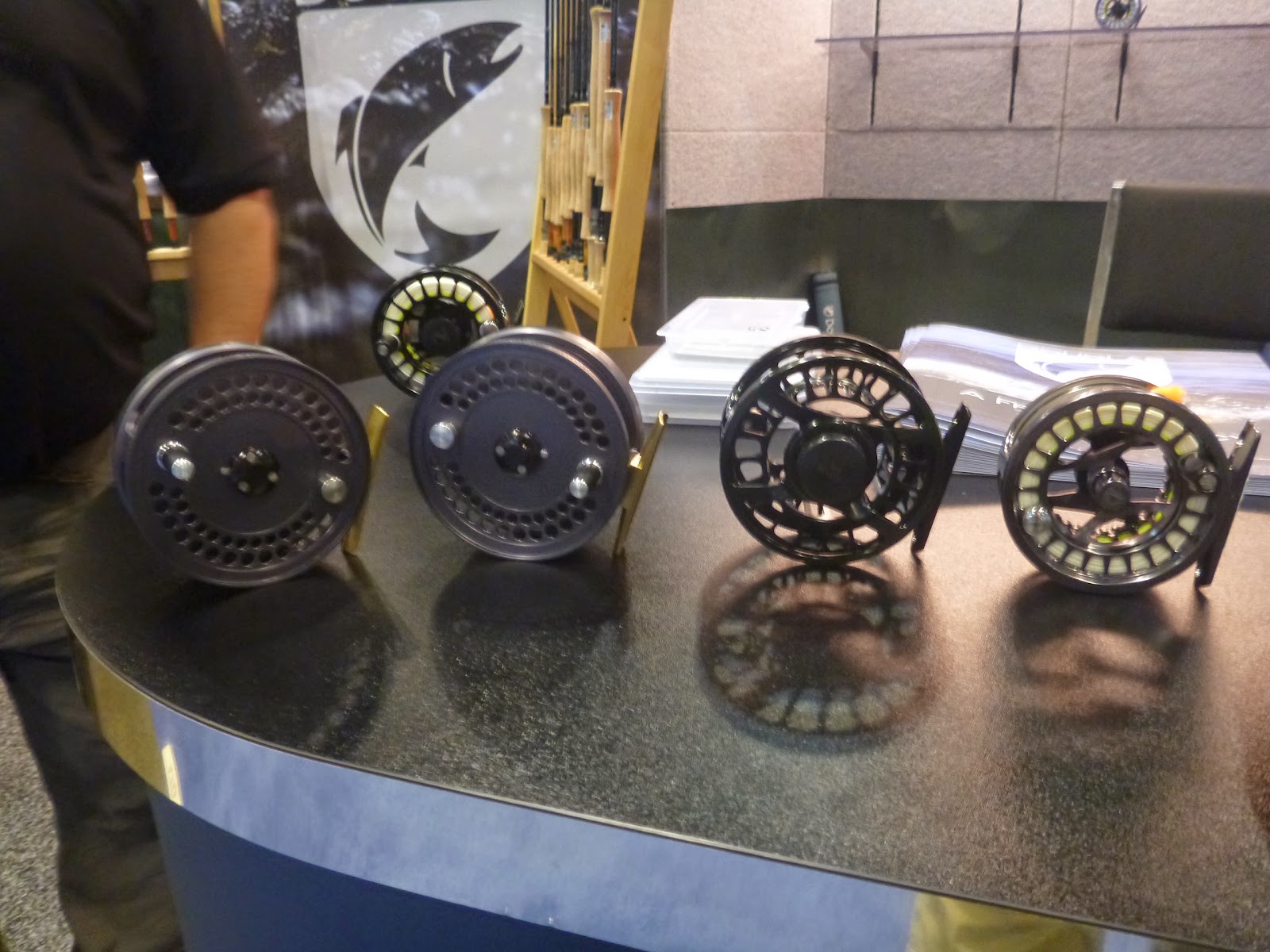 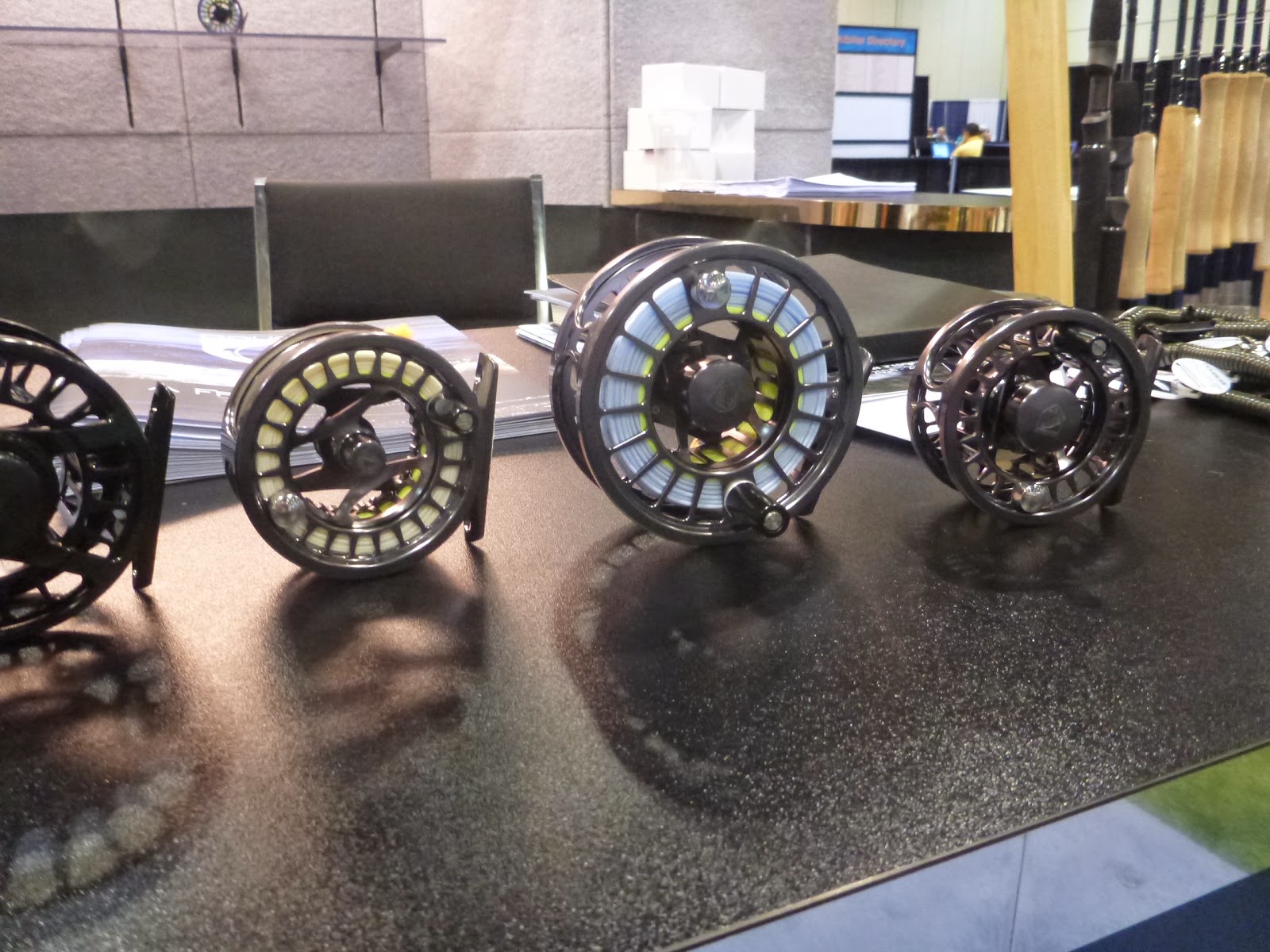 The TF-70 fly reel from 3-TAND won the Best Fly Fishing Reel in the ICAST new product showcase...and for very good reason, bang for the buck.  3-TAND reels all have sealed drags at incredibly friendly price points.  It you thought the Douglas Nexus was priced right, how about trying $179.95 (1-3 wt) to $209.95 (6-8 wt) on for size!

The TF Series features the aforementioned patent pending NanoCF Drag system that is both smooth and strong.  The reel itself is made from 6061-T6 cold forged, tempered aluminum so it is also extremely lightweight (3.0 to 4.6 ounces, depending on size).

Like the Fly Reel Company RB1, this too is a very handsome reel in person.  The pictures don't really display the nice, bright, satin silver finish on these reels. 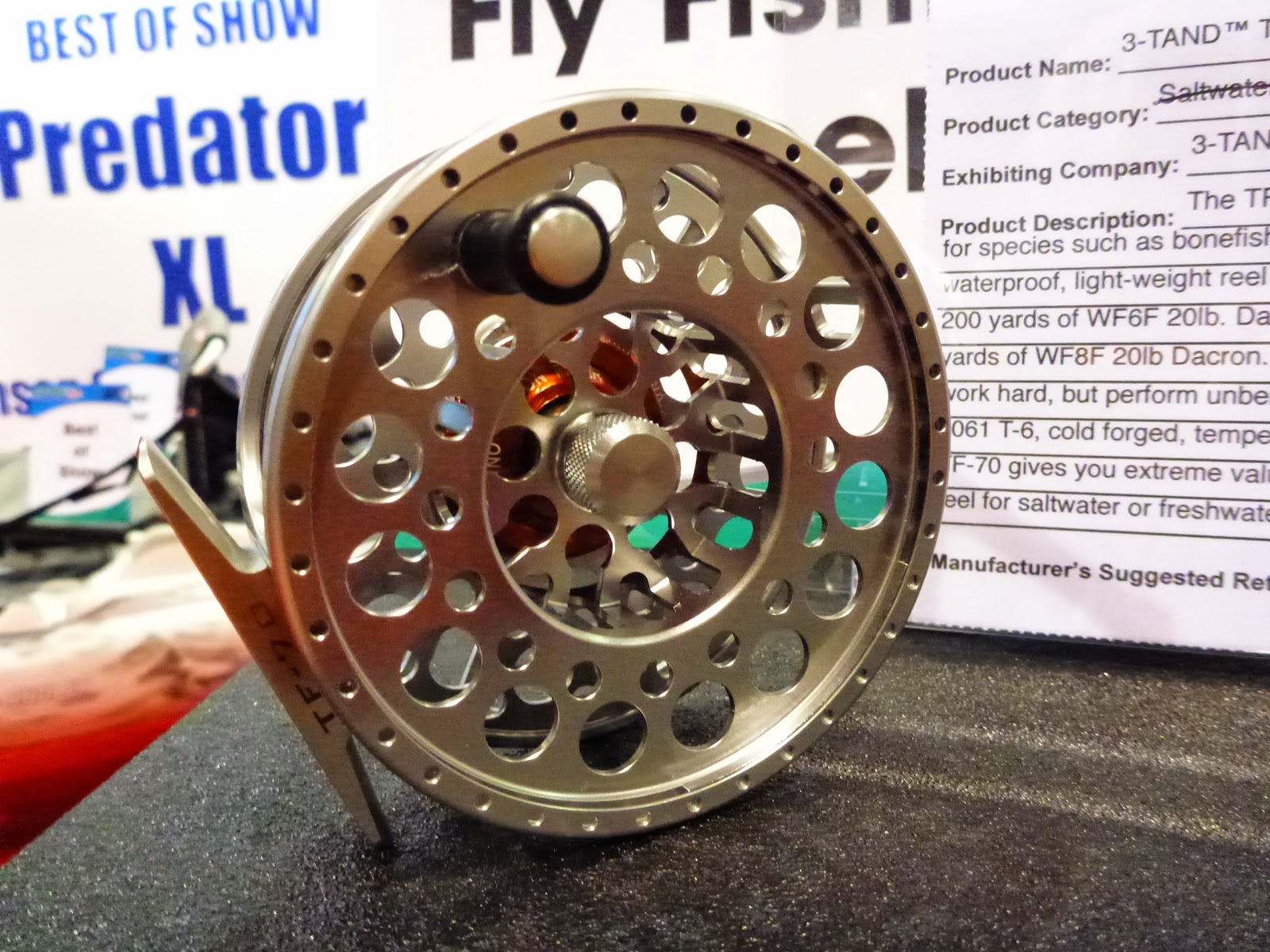 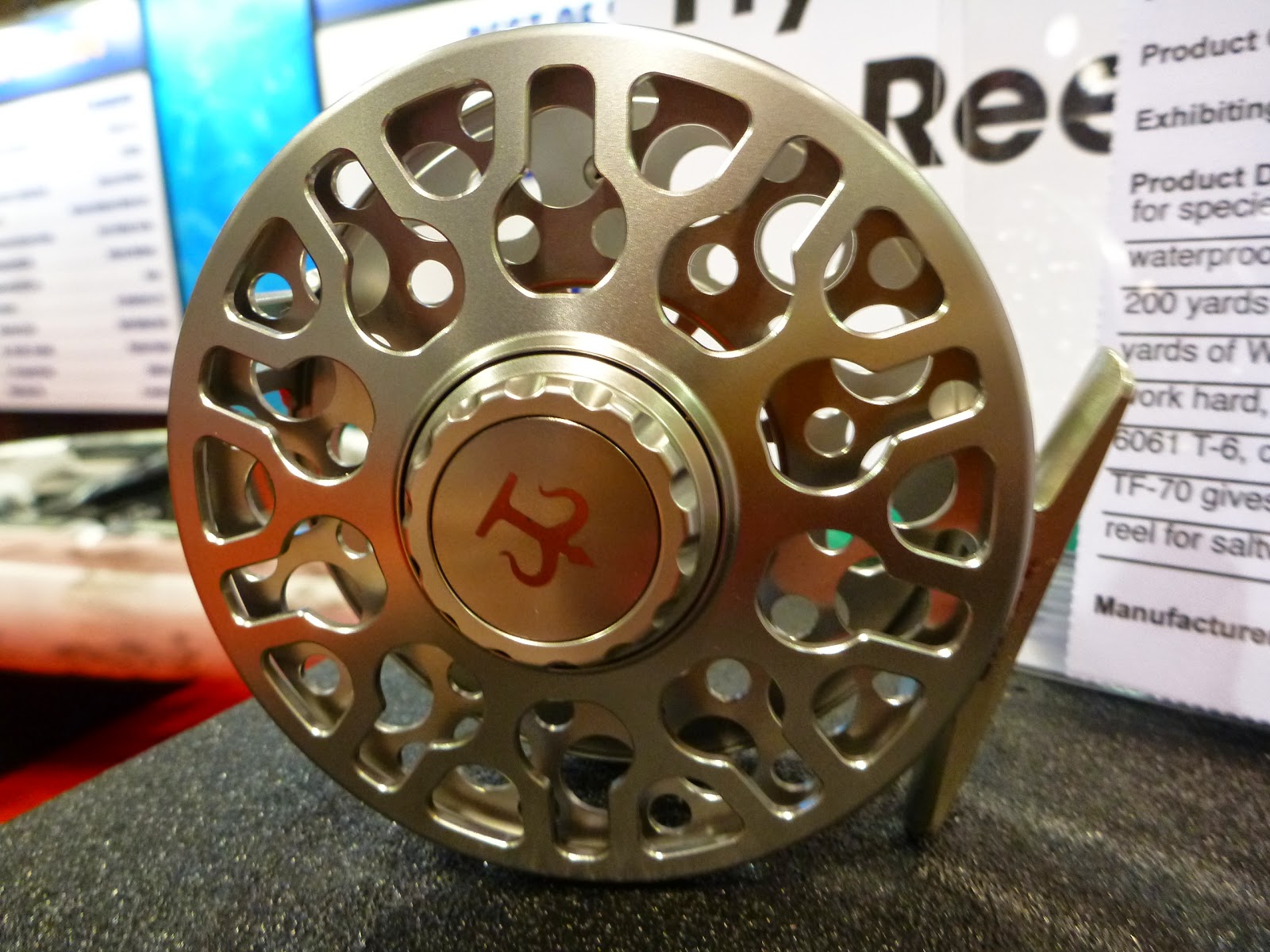 Nautilus might have had the busiest reel booth at the show, so I didn't really bug any of the sales people while they were at work.  Their new Silver King series of CCF-X2 reels won the IFTD Best of Show for both freshwater & saltwater reels...so I guess all the booth buzz was justified.  My pic of the reel came out really crappy, so I'll send you to the Venturing Angler for a better look.

That said, this particular display case below was getting a lot of attention, perhaps stealing some of the Silver King's spotlight as it had examples of custom finishes on other Nautilus models.  Note the camo on the left, and well...you can't miss the bling up front... 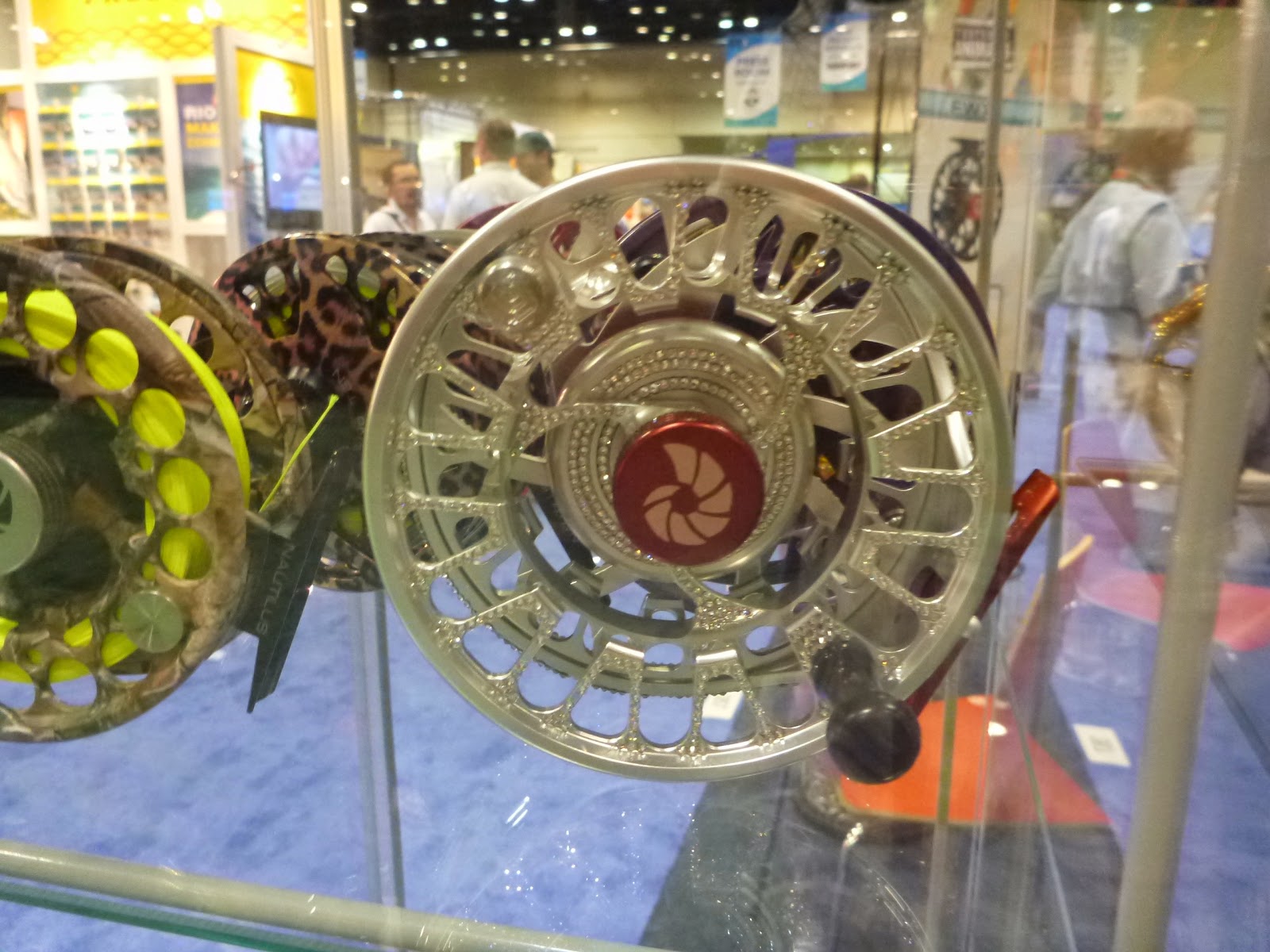 I really didn't learn much at the Daiwa booth other than a lot of their spinning reels will feature Air Rotor technology as shown in the picture below.  I have to say, the reason why I went in the Daiwa booth was just for eye candy, because in my opinion, they make THE BEST looking spinning reel on the market.

Look, you pick up a reel at the show, give it a few cranks, they all feel like butter.  Daiwa reels feel great too...but the cosmetics feature dark blacks & anthracites, deep golds and reds, chromed out silvers, and basically even the tiniest trout reel looks like it'd kick the ass of any other reel by using the Dark Side of the Force. 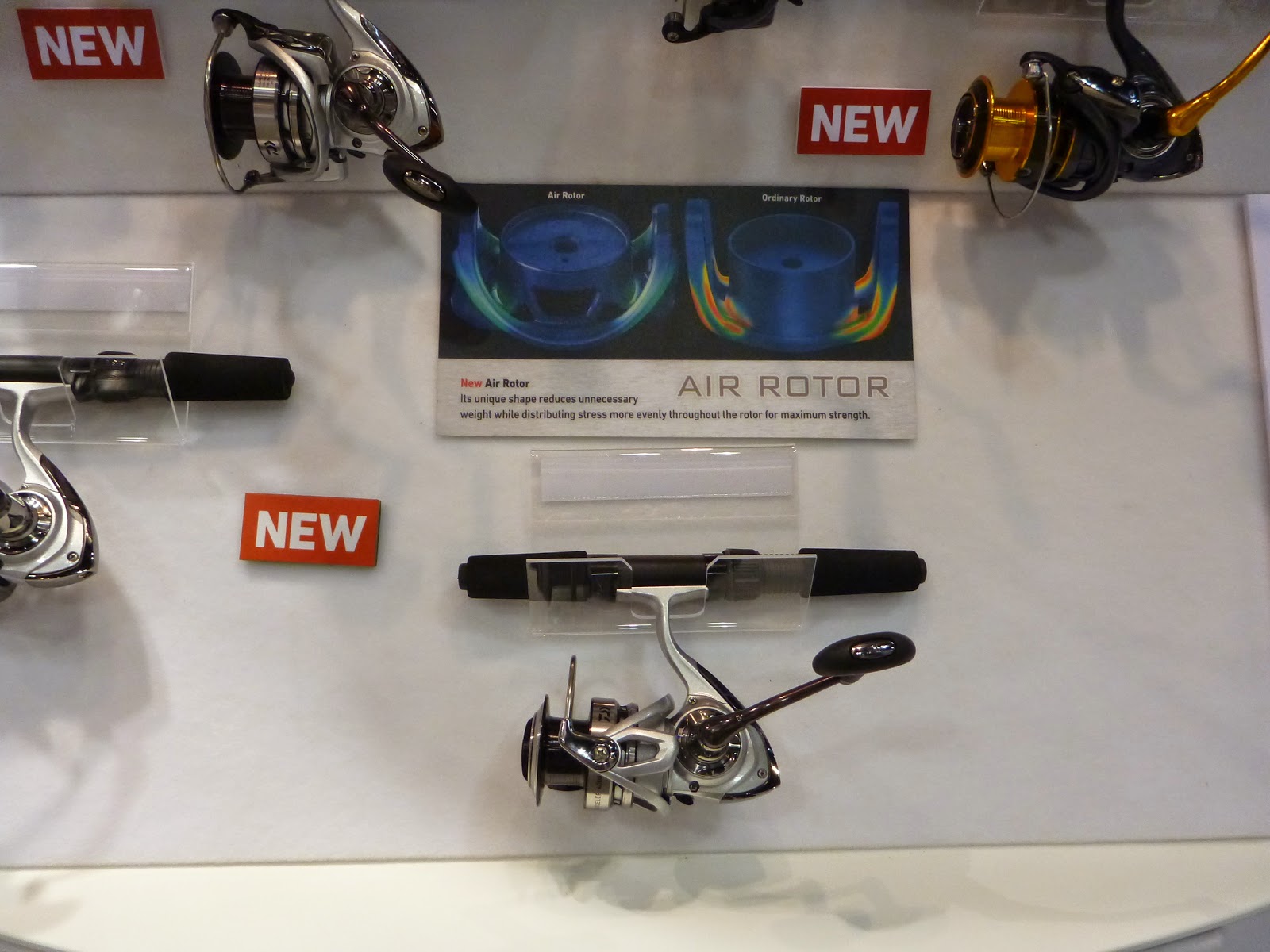 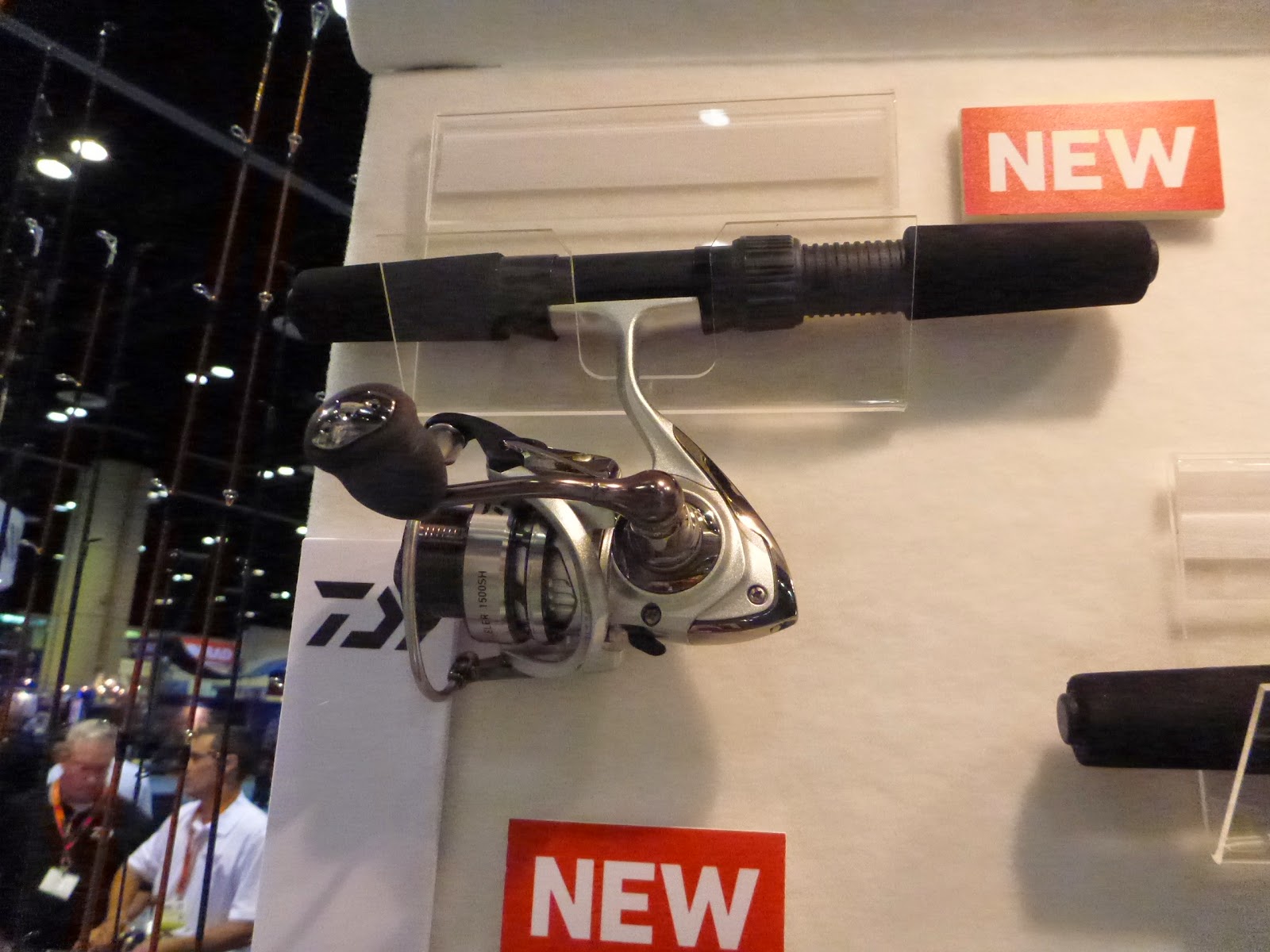 Daiwa also had all of these crazy big "power assist" and line counting reels with LCD screens and buttons on them that were just interesting to look at.  I hope they at least come stock with Tetris, like the original Nintendo Game Boys used to... 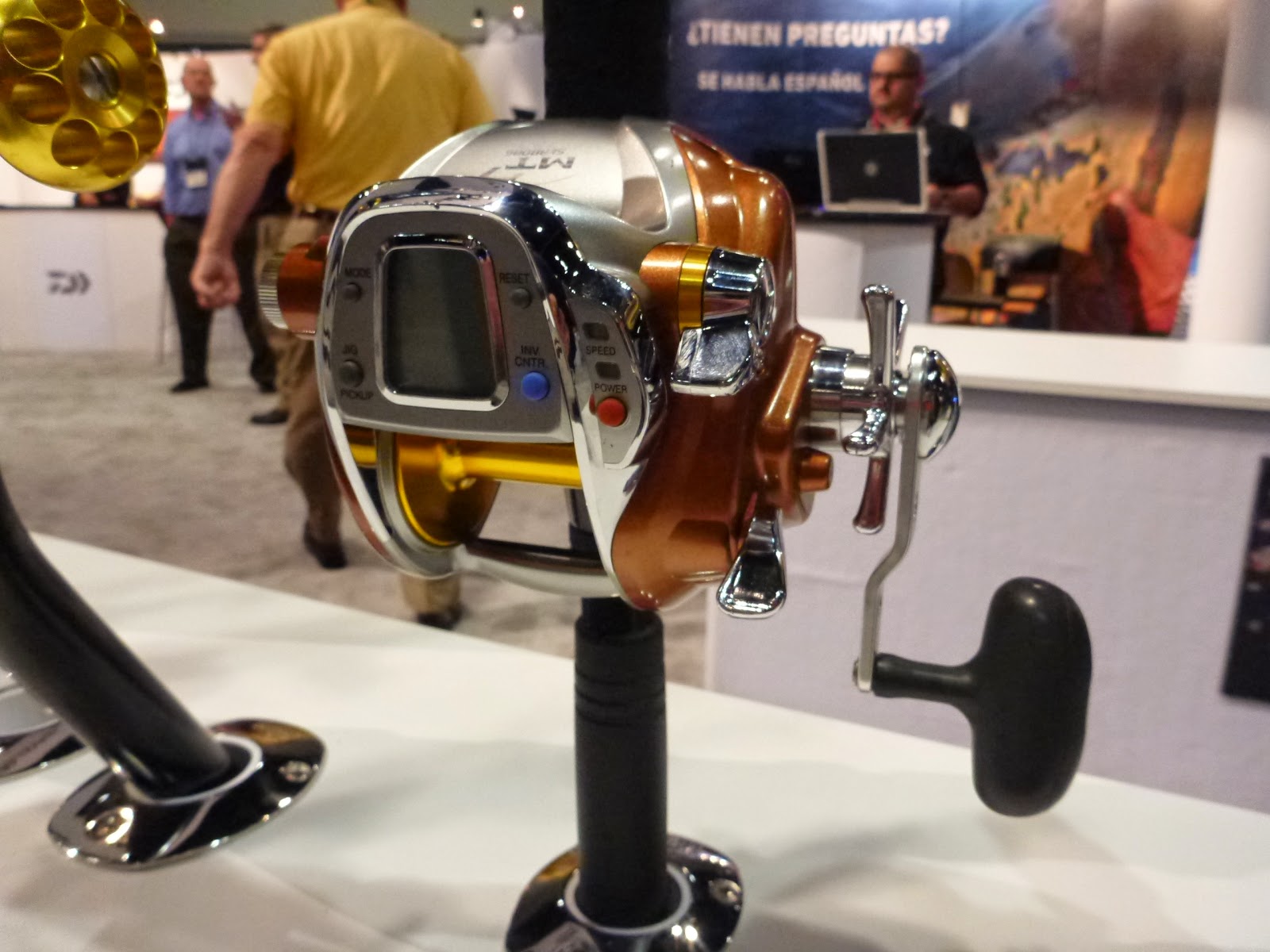 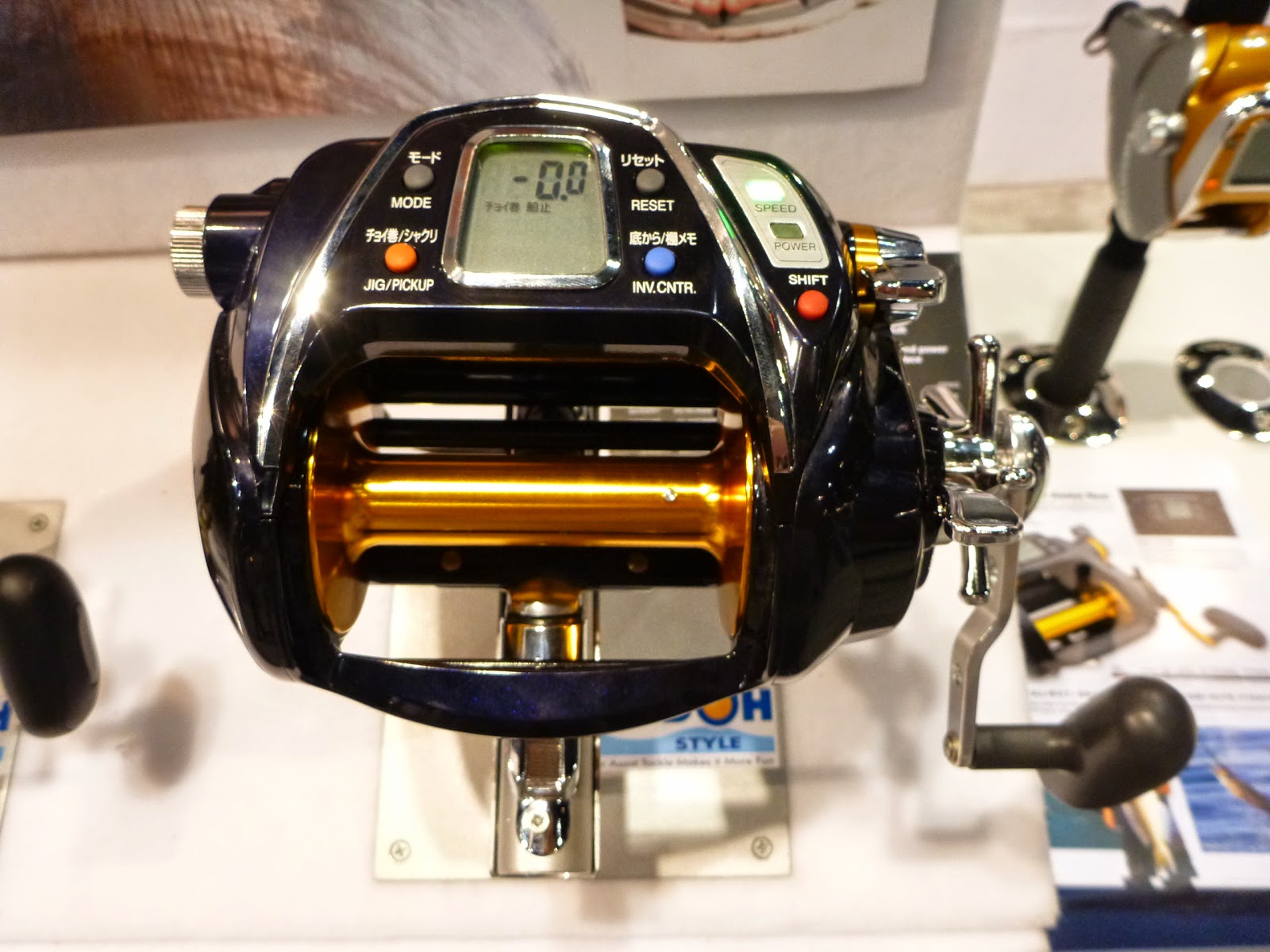 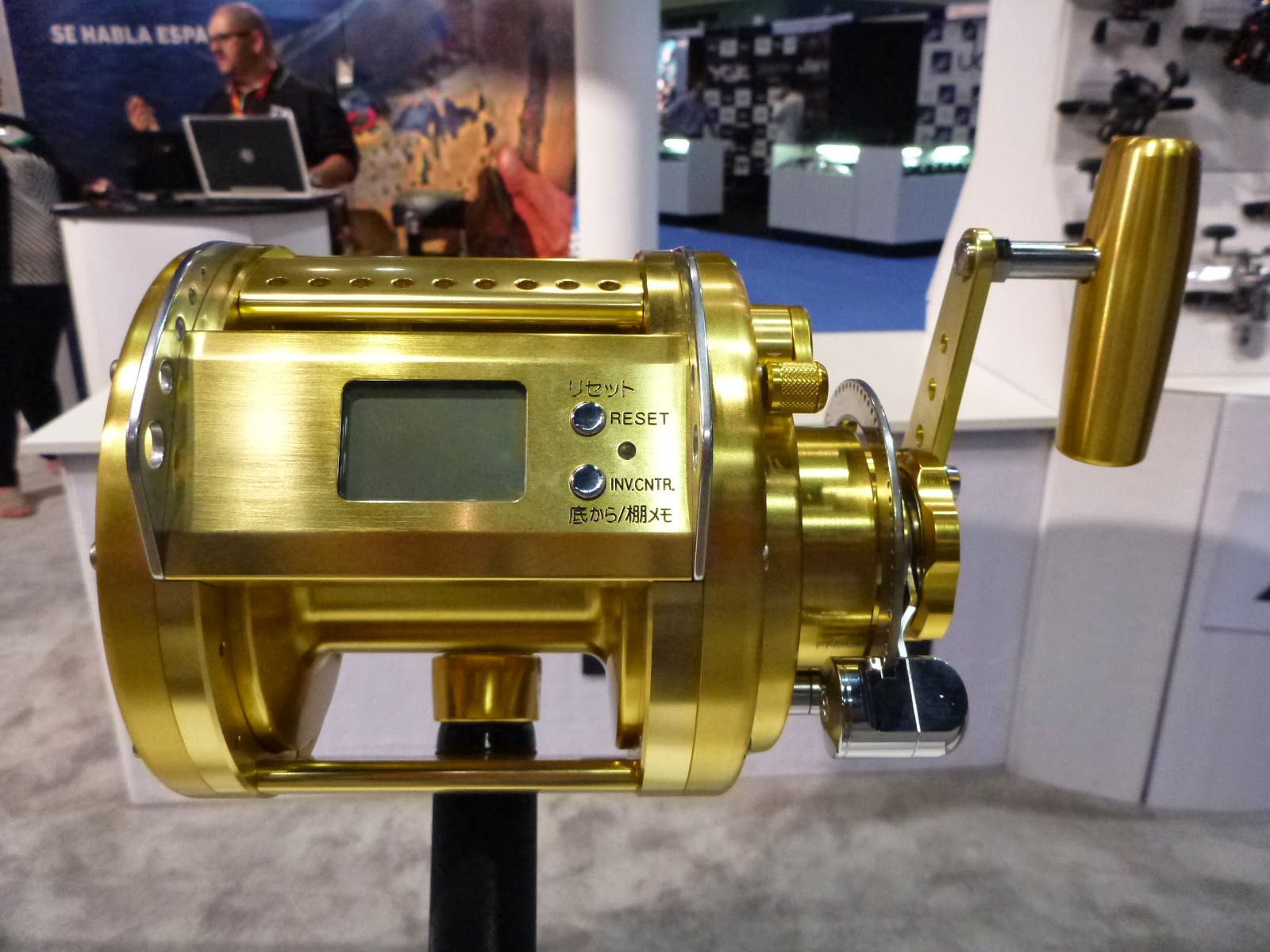 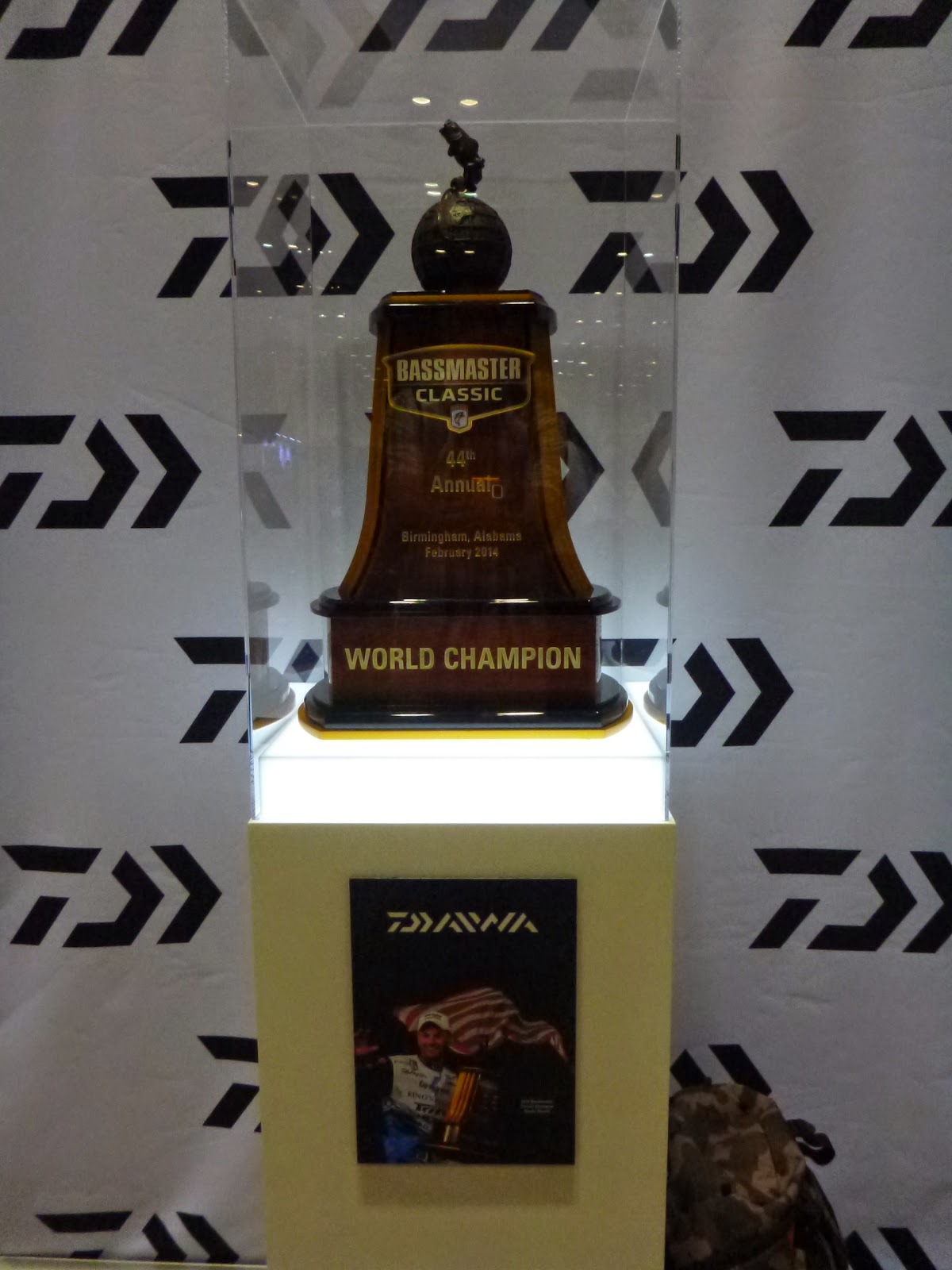 The big news from Penn was the update to their Battle saltwater spinning reel, brilliantly re-named the Battle II.  The main thing to know about this reel is that it has enhanced corrosion resistance due to the use of 5 sealed bearings.  It also has an improved carbon fiber drag system that increases maximum drag by 15-50%.

It's a reel I'm seriously considering when I go to upgrade my spinning tackle for the kayak...yes, the more I live in Florida, the more I find the need to rediscover spinning gear every now and then.  Other folks must have like the Battle II as well, because it won the ICAST Best Saltwater Reel award in the new product showcase.  Once it hits store shelves it will retail from $99.95 to $129.95. 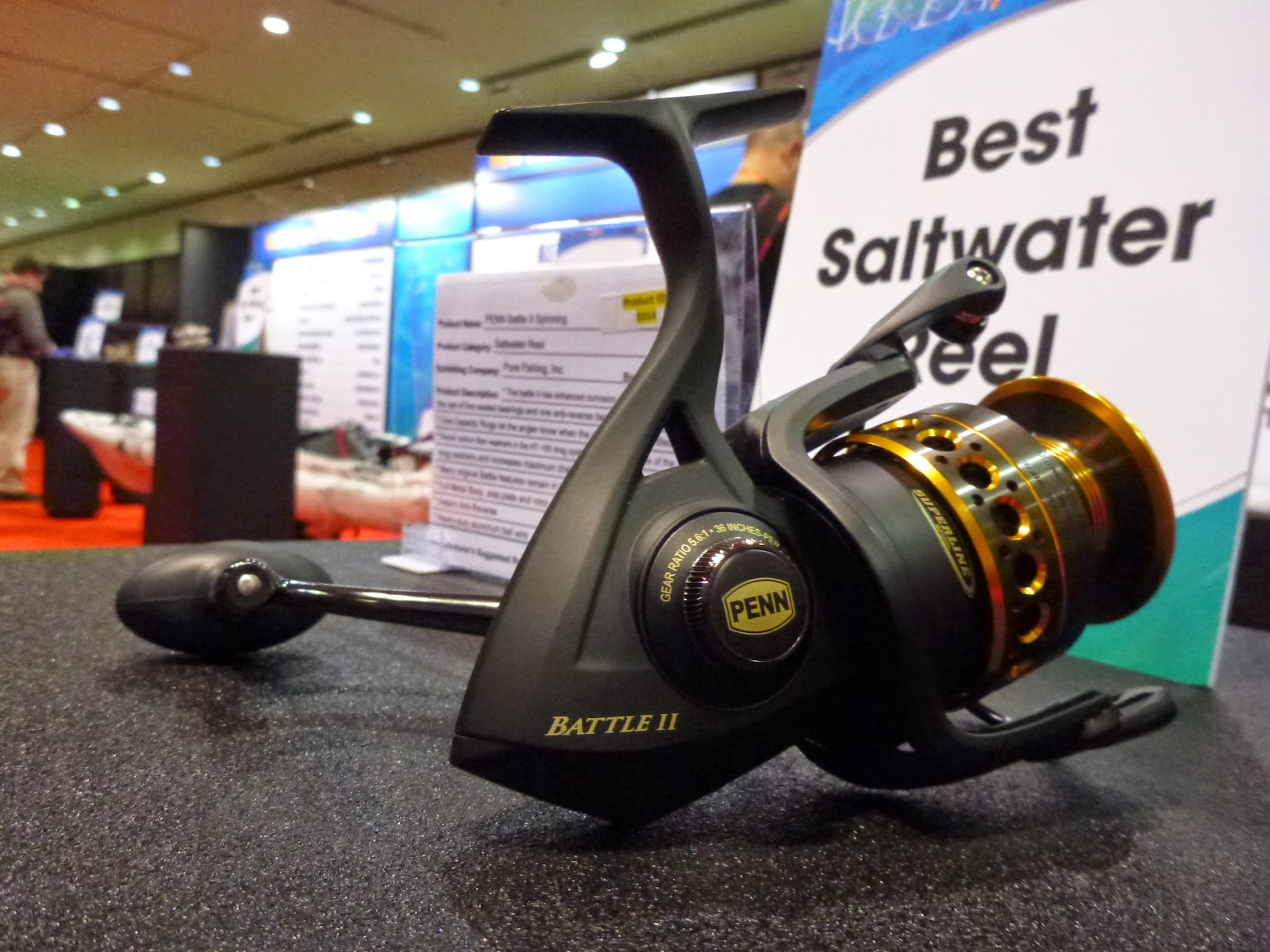 While a saltwater-safe, fully sealed drag was one of the themes you may have noticed in many of the fly reels mentioned above, the other theme prevalent pretty much everywhere was COLOR!  It seems that all fly reel makers are going the way of Abel & Cheeky and are, or will be, offering tons of custom color options, either standard or with a small upcharge.

One of the more eye-popping booths (believe it or not) was Tibor, who seems to really be embracing the whole mix and match color option proposition.  It looked like a roll of tropical fruit Life Savers got unraveled.

Their Signature Series reel already comes in 6 different colors (Satin Gold, Jet Black, Royal Blue, Crimson, Moss, & Graphite), but they've added an additional 2 custom hub color options for 2015 (Violet 3D & Graphite) to go with the 4 from last year (Jet Black, Aqua, Lime, Crimson).  The hubs are newly redesigned and can be purchased separately to upgrade any current Signature reel.  I wish I took a picture at their booth, but I didn't, so here's an image lifted from their marketing materials... 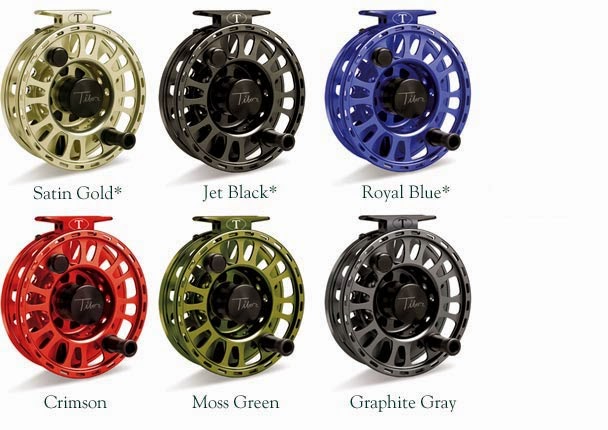 I did get to handle Galvan fly reels for the first time.  Very solidly made in the USA, I was very impressed by the fit and finish of both the Brookie & Torque reels.  The tiny B 0-1 Brookie reel, for 0-1 weight lines was a really neat reel in particular that is making me begin to re-think what an ultralight small stream reel should look like.

On the spinning side, (just in case you were wondering), I did stop by the Straighcast reel booth (highlighted HERE in the recent past) and spoke to Mark Kendra at some length about his line twist-free, alternating reel concept.  He wanted to let everyone know that the pictures out there are only of the prototype, which he also had at the show.  They are working on the 4th prototype now, and the finished reel will have a closed housing to conceal the gears, and will also be a bit more compact in profile.  The target retail is "under $400."  How much will probably depend on how much can be built overseas.

To close, I'll leave you with a video of kids' Roddy Lite light up spinning reel display, just because it's fun.


As you've probably noticed, I've embedded links to each of the manufacturer websites, so if you're looking for more information on any of these reels, please click through and pay them a visit!
Posted by Michael Agneta at 3:00 AM