He wrote a post about last weekend's fishing outing the other day, so I figured I'd return the favor and let you know what really happened. 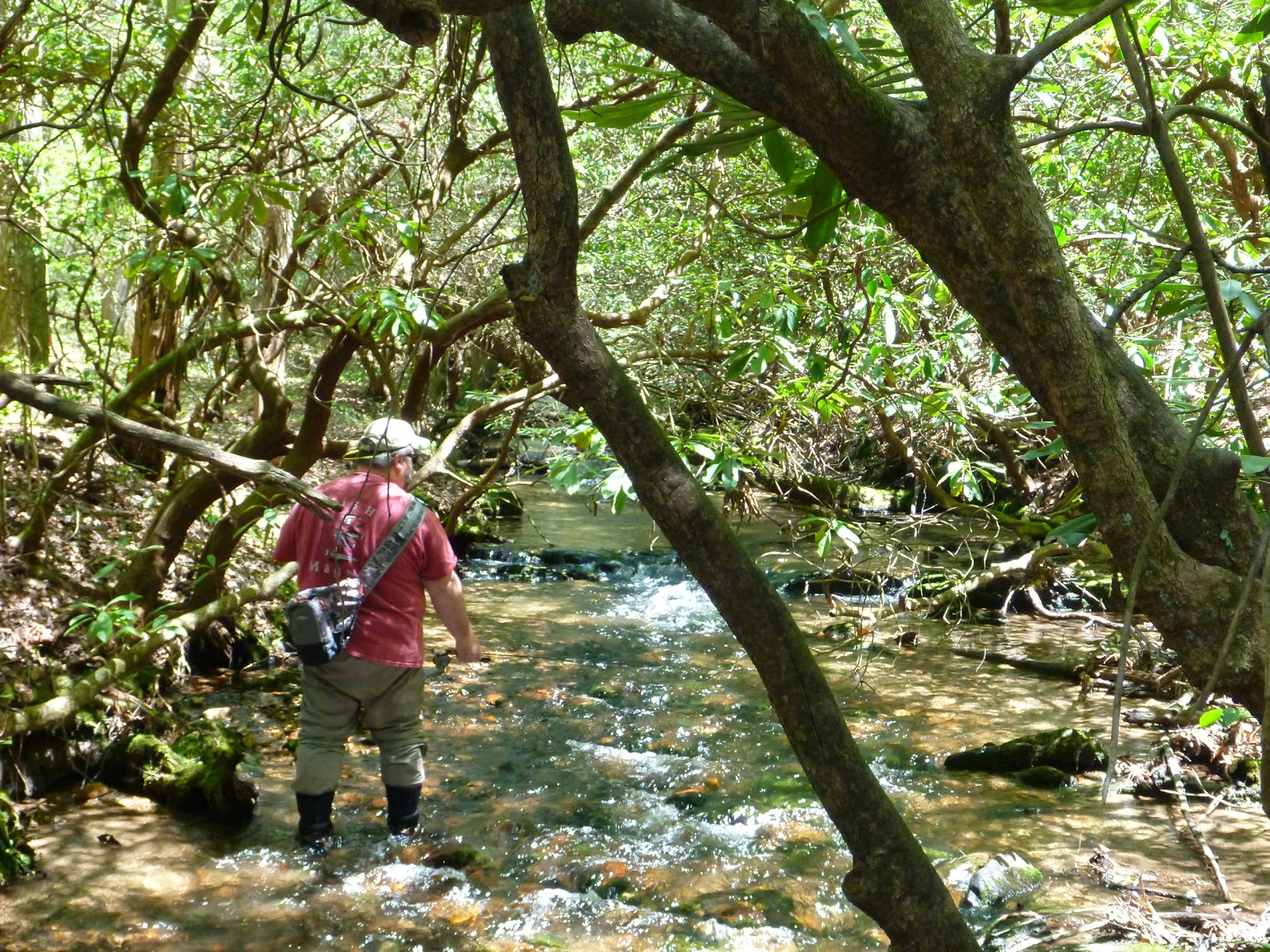 It all started with a bit of a mental breakdown.  As much as I try to convince myself that I like Florida, there's more than a little piece of me that misses the things I really enjoyed up North.  Trout fishing is one of them.  It was my escape.  My weekly-ish mental recharge.  With April in the rear view I was kind of getting legitimately unnerved by reading social media posts of everybody's trout seasons heading into prime time...and none to be found in the stagnant warmwater environs of Florida.  Florida fishing, while fun, doesn't quite hit the same sort of internal reset button.

So I basically imposed my presence on Owl Jones.  Sent him a Facebook message and more or less said, "I'm going crazy down here and need a trout fix. Headed to Georgia next weekend, want to go fishing?" 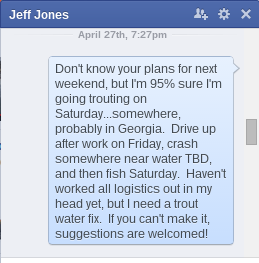 While I hoped he'd say yes, you never know with him.  He could be off painting chickens, paddling plastic canoes, freestyle rapping, or something like that.  Luckily, he said yes, because I probably would have just fished whatever stocked trout water the Georgia DNR said was closest to Jacksonville.

Instead, I made the 6 hour and change drive up to Dahlonega, GA...which I learned is pronounced DA-LON-EH-GA, not DALL-O-NEGA, as I had hoped.  You know, because Ricky Bobby is awesome and I really wanted to name this post Dahlonega Nights.  Anyway...the plan was to fish some of Owl's not so secret "favorite" wild trout water on Saturday.  I love it when a plan comes together.


Lemme tell you something.  Owl can talk lots of jibber jabber.  I'm relatively laid back.  He and I get along pretty well.  We're sort of like Penn & Teller without the magic.  You can figure out which is which.  He told me so much stuff, I'm not even sure I could regurgitate half of it if I wanted to.  I also wouldn't have had it any other way.

Oh, the fishing...yeah, we did that too.  After driving around a little bit and getting an insight filled guided tour of local landmarks on the way... "That schoolhouse over there is historic...because it's old..." we ended up on an absolutely beautiful stream that was allegedly full of wild trout - rainbows in the first section and then brookies at a bit of a higher elevation. 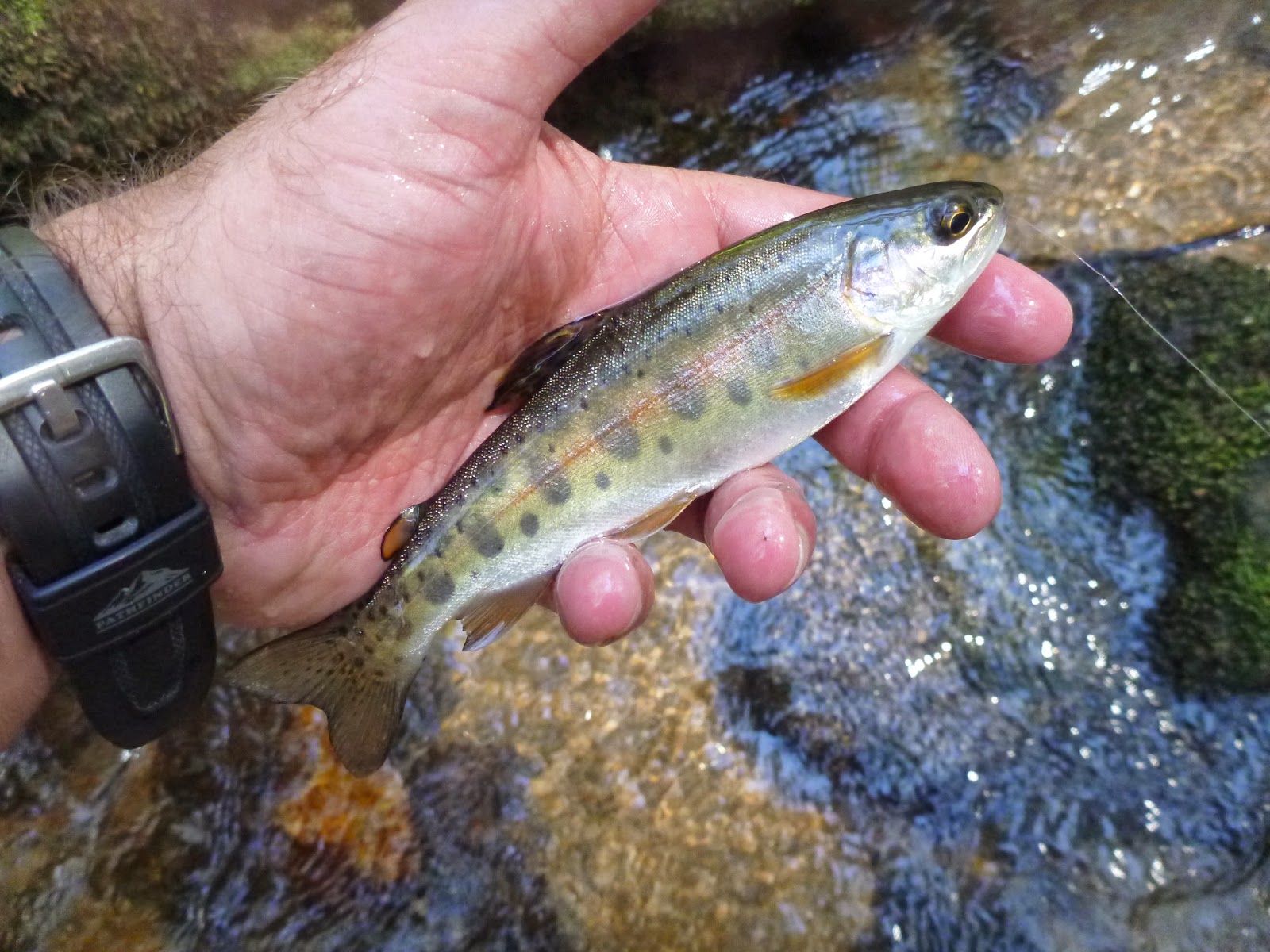 As we got out of the car, Owl gave me the rundown..."Watch out for bears, hornets, snakes, poison ivy...and if you see somebody doing something funny, don't mess with them...I didn't bring the heat today."  Ummm, okay.  Welcome to Southern Appalachia...wait, was that a banjo? 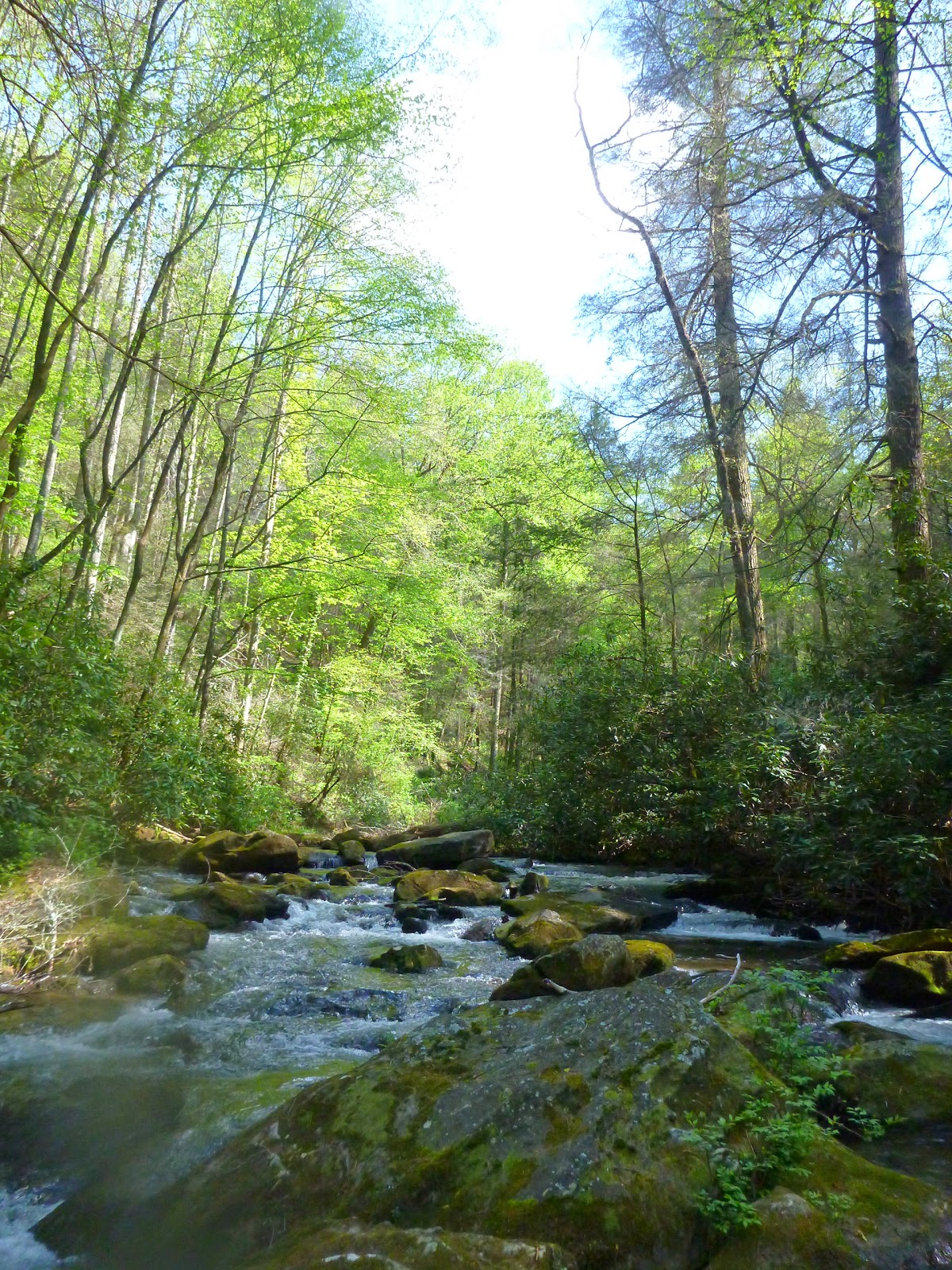 The fish were probably there, they just chose not to cooperate...at least not in ridiculous quantities.  Owl blamed it on the rain earlier in the week cooling the water temps and raising them about 1/3 higher than normal...I blame it on all of the laughing we did on the water as we talked about stupid stuff like old TV shows, flipping kayaks, dining with taxidermy, top secret Doritos flavors, and other fishing bloggers.  Yeah, we probably talked about you...well, at least some of you.  Either way, we were not very stealthy.  Case in point.

I ended up landing 3 small rainbows and missing a hookset on a 4th, using the Tenkara USA Rhodo, a red and white kebari, and what Owl likes to call my "butterfly net."  We both struck out up higher on the smaller water for brookies. 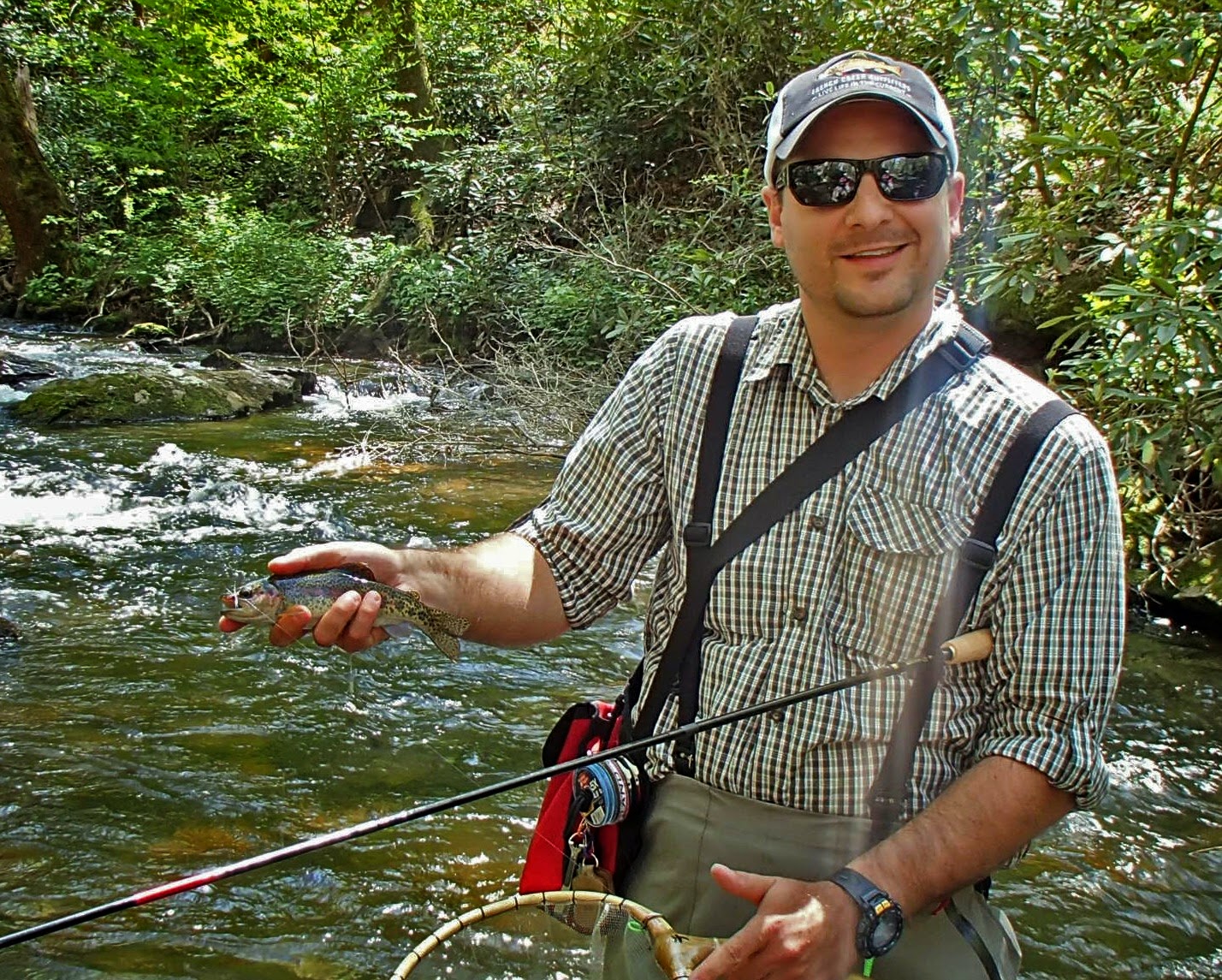 Unfortunately, Owl didn't catch any trout on the day, but to be fair, he let me fish all of the prime water first...and spook any and all fish before he'd even get a line wet...a perfect host & guide.  Snap that Hank Patterson. 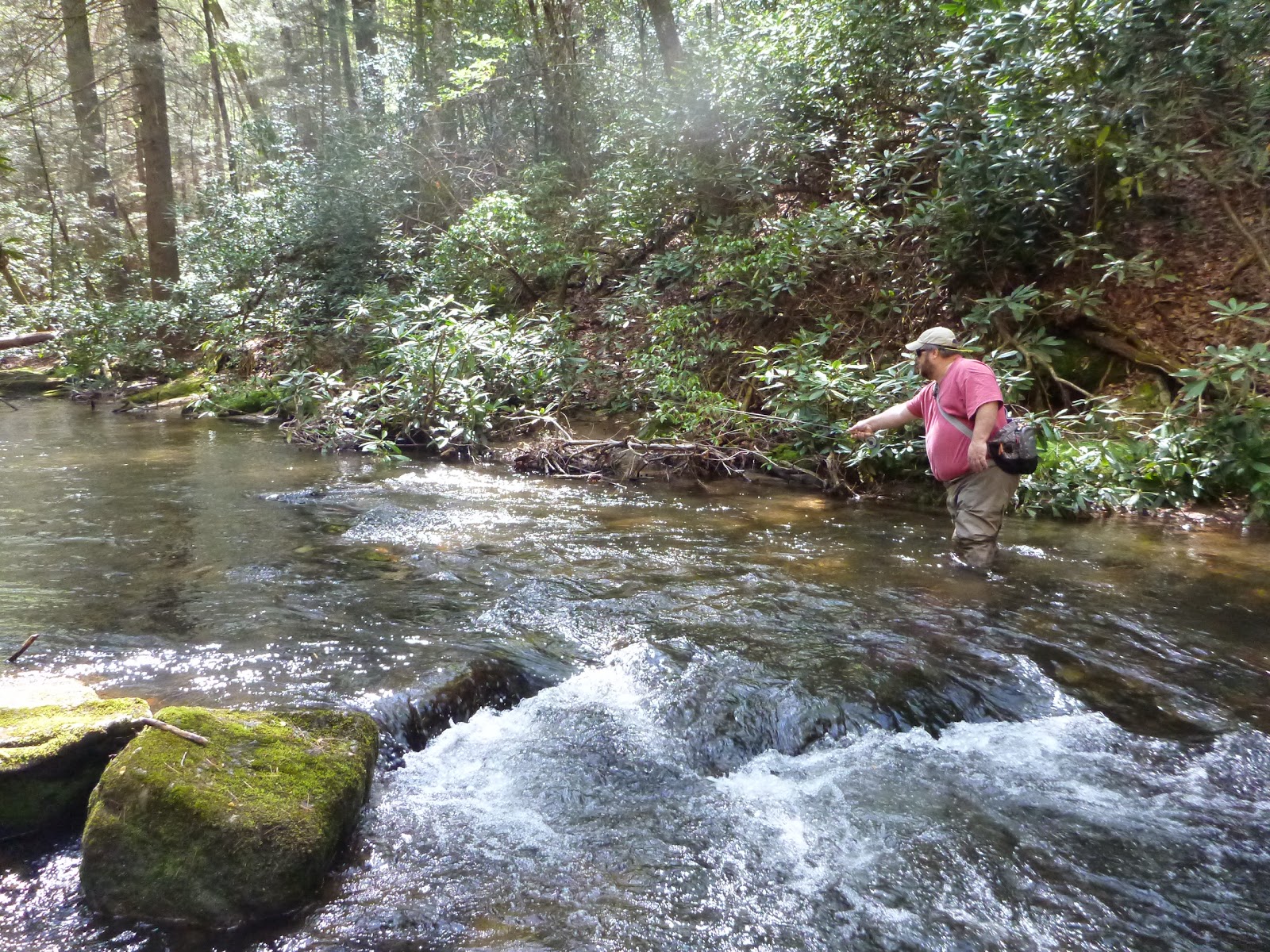 The only thing I can say is there just wasn't enough time in the day.  The 8+ hours on the water flew by in a blink of an eye.  Probably because I had an absolute blast.  They just don't make water (or guides) like that in Florida and I need to make a point to get back to North Georgia again soon.  Very soon.  I made sure to buy a full year's Georgia fishing license as an incentive to return.

To close, I just want to thank you again Owl Jones.  (As always), you were a very generous host.  I couldn't have asked for a better time out; my coldwater fishing mojo has definitely been restored.  I hope to be able to return the favor on the First Coast in the not too distant future.  Hint, hint.