Tenkara Summit 2013 - Fishing The Day Before

Exhausted, bruised, and smiling, it's tough to get back into the work week after a most excellent long weekend at the 2013 Tenkara Summit in Harrisonburg, Virginia.  Over the next two days, I'm going to recap some of what went on...because it seems like a lot got crammed in over a short period of time.

I made the trek down to Virginia from Philadelphia immediately after work last Thursday night.  It took about four and a half hours to get down there, but I finally arrived around 11:30 PM, just in time to check into the hotel and get a good night's sleep for a day of Friday fishing before the Summit was to start on Saturday.

I figured I'd split Friday up into two parts, as I wanted to hit at least a few different fishing spots.  Using the advice given by Tom Sadler in his Middle River Dispatch blog, I figured I'd give the Rapidan River a go in the AM, and Skidmore Fork in the afternoon.   Unfortunately (and I didn't realize this until I was halfway there), the link he provides that gives the Google Maps GPS directions for the Rapidan were really that for the St. Mary's River...so I fished the St. Mary's instead. 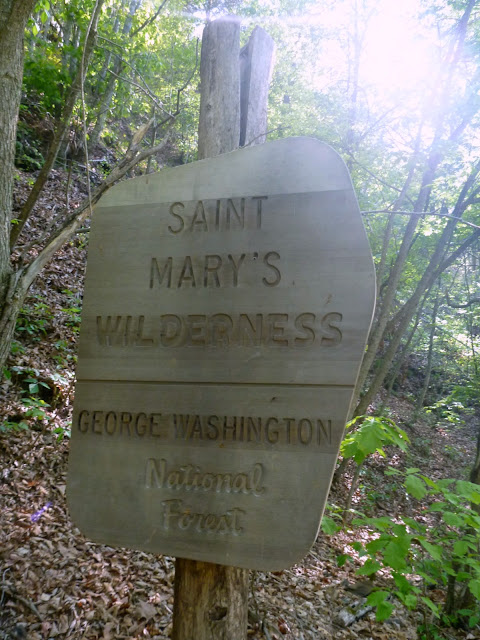 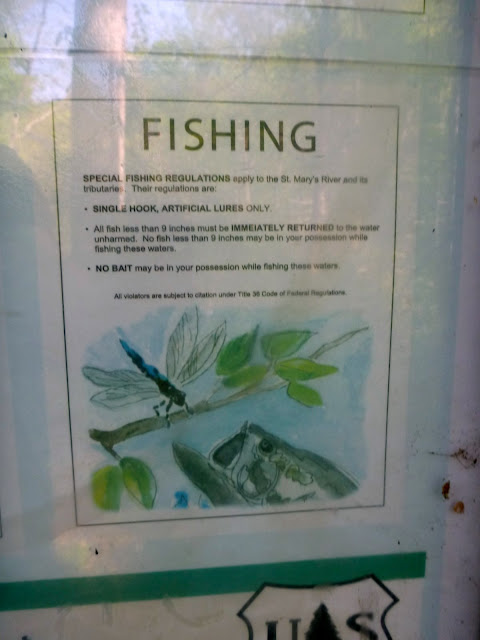 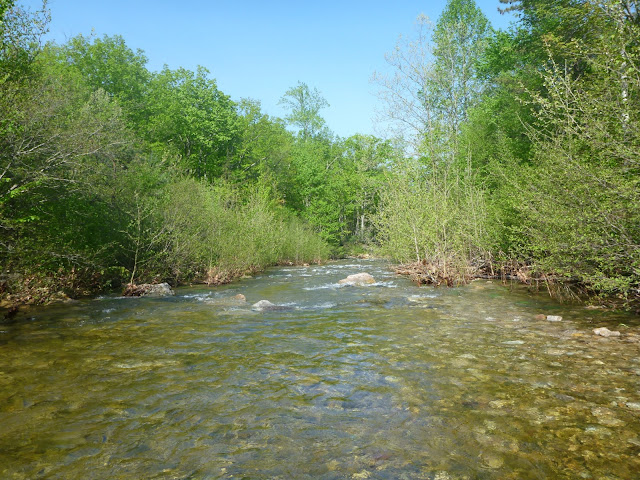 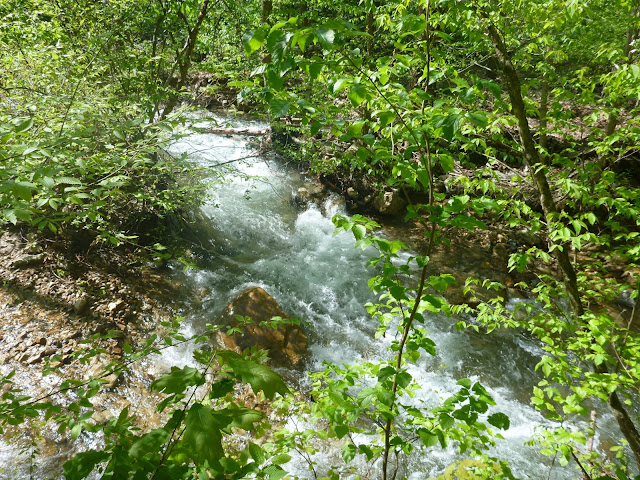 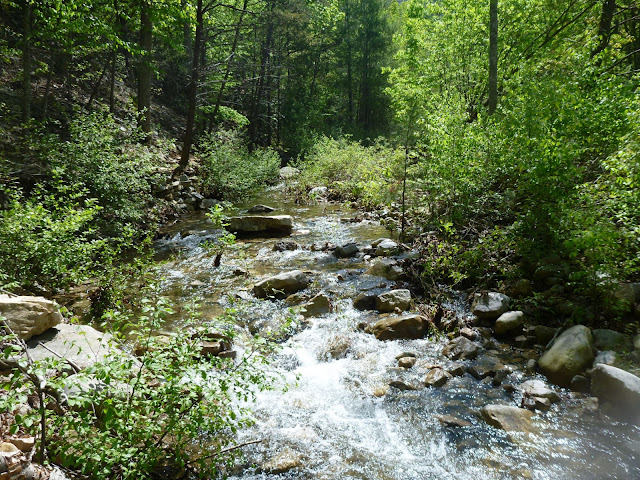 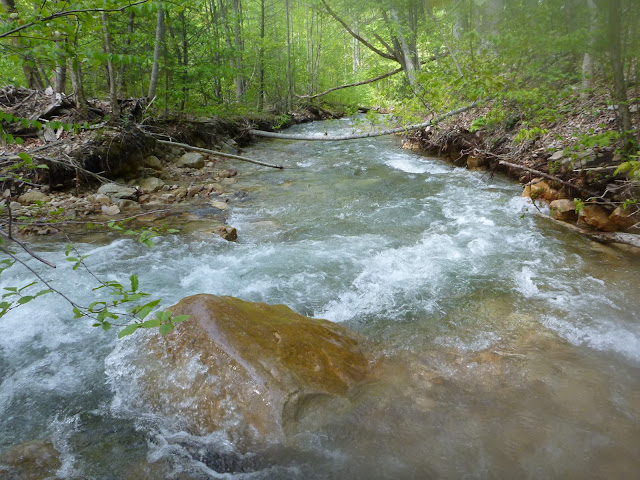 Now the St. Mary's was gorgeous.  Picturesque even.  A little bit off the beaten path with not much of a trail in and around.  It truly was in the "Wilderness."  Albeit a damn beautiful wilderness.

Although it doesn't look it from the pictures above, the water was really high and really fast and pretty hard to wade.  The one pic with all the rocks wasn't even from the main flow, but a smaller break off.  Turns out high water was to be the trademark of the trip as the Harrisonburg area suffered through about a week of rain prior to the Summit wekeend.  Although I had a couple of swipes and flashes of brookies stinging my kebari, I didn't catch any fish.  Oh well.  After about 3 hours decided to leave after I took a spill on some rocks and banged up my left wrist.  I was okay, but figured it was a sign to get lunch.

After lunch, I headed over to Skidmore Fork to try some tenkara in a different locale.  Luckily, Tom's map worked this time.  :)

Even though the water was pretty high and fast here too, I found a little bit more "soft" waters in and around rocks and downed trees that yielded fish.  I didn't catch bucketfuls, but I did manage a few wild brook trout, expanding my wild Eastern brook count to Pennsylvania, North Carolina, and now Virginia.  (Who's next?!) 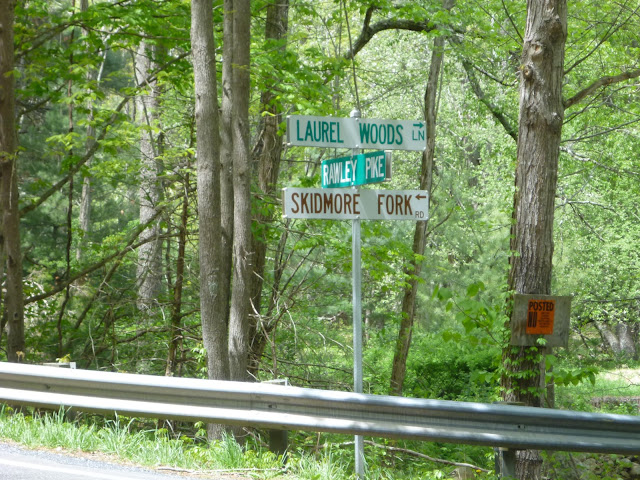 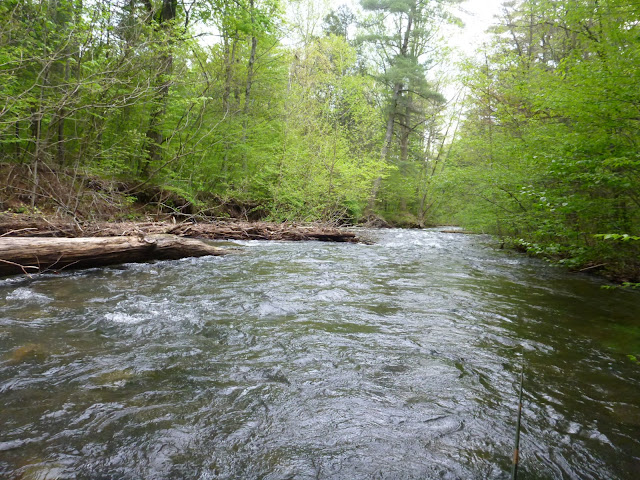 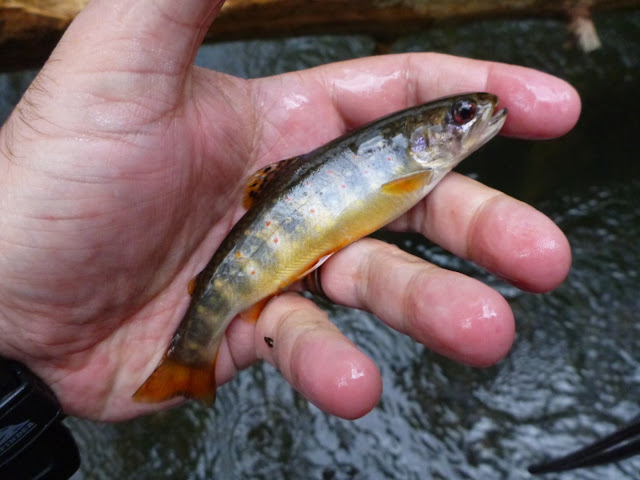 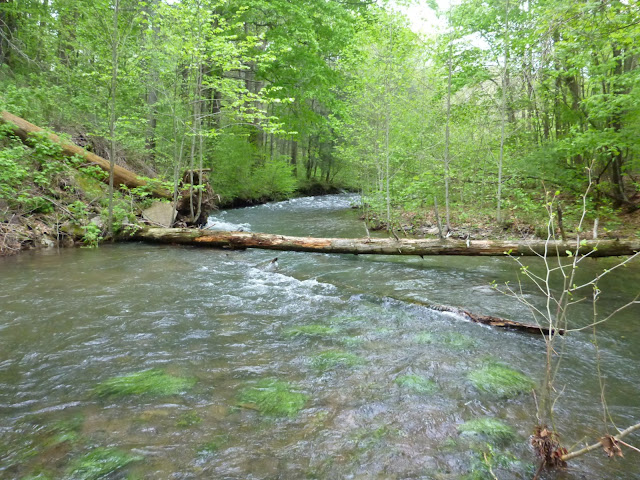 The best part of the trip to Skidmore was that I happened to run into a lot of different folks in my meanderings.  About five minutes after dropping in I waved hello to Chris Stewart as he appeared from the brush and crossed the stream above me.  As I walked in the woods I passed Chris Zimmer (Zimmerbuilt) and bumped into and chatted with TJ Ferreira and John Geer from Tenkara USA who were watching Misako Ishimura fishing in the current.  Finally, on the way back to the parking area, I was greeted by Daniel Galhardo, TJ (again), and Anthony Naples, sharing about a half hour conversation before sending out the search party for the rest of their group.

Exhausted, I headed back to the hotel to grab a bite to eat, shower up, and get some rest.  However once I got there I got a text from Lou (Fly & Fin) that he was down at the bar...so of course being thirsty I wandered down and met up with him, Bart (The Jersey Angler), and their friend Rich.  A better bunch of guys I've never met.  They had evidently dominated Beaver Creek earlier in the day.  As the night progressed, the folks from Skidmore also seemed to show up one at a time as well.  I also met Justin Ide, a talented photographer that took some great pictures to chronicle the event.

Some other things may have happened after the bar closed, but after a few sips from a Mason jar it was all a blur... #shineresponsibly.

Tomorrow, Day One of the actual Summit...