That's been my travel schedule the past four weeks.  In and out of airplanes, hotels, and rental cars, and keeping in touch with my job & family using what else...my cell phone.

Knowing this little run of the southern gauntlet was coming up, I held off on writing up this particular gear review until now.  See, cell phones receive quite a bit of abuse during travel...tossed in bins to go through airport security, not-so-securely rested in cup holders to play the role of GPS, and simply just dropped, jostled, and all that kind of horseplay from overuse...

And I'm gonna come clean right away.  I'm an Android guy.  I hate my work-issued iPhone and need a reason to use it...but in the scheme of product testing, the above seemed like a fair stress test to me... 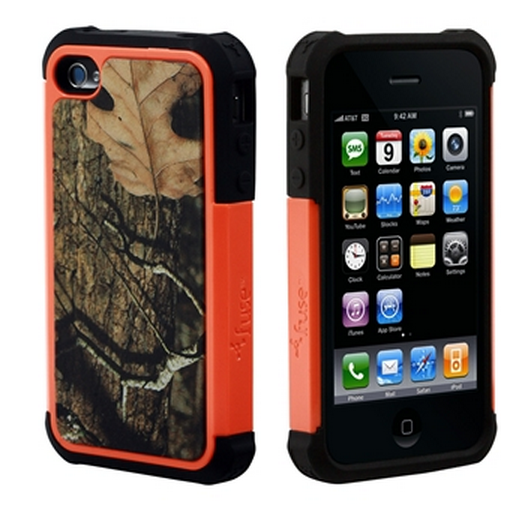 THE GOODS:
The folks at Fuse Plus You sent me THIS, their Rugged iPhone 4/4S Case in Orange & Mossy Oak.  They actually have a whole line of Mossy Oak licensed cell phone cases, but this one made the most sense...because I am...so...rugged... 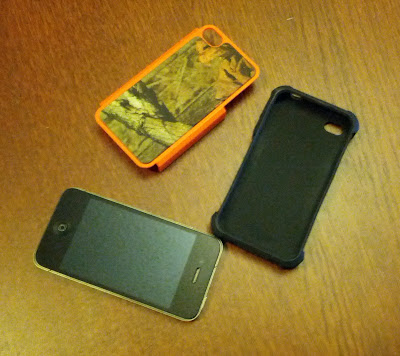 The case is actually two parts.  The first is a silicone skin that you slide your phone into.  This gives you a bit of grip, as well as some protection by some big squishy bumps of silicone covering the four corners.  Once that's on you slide the orange & camo hard shell on top of the silicone skin, and you're in business.  The hard shell keeps everything in place, and as previously mentioned the silicone adds protection where needed.

PROTECTION FACTOR:
So I have had two other cases for my iPhone to date.  The first is a work-issued Otter Box.  The second is a cheap Han Solo in Carbonite case I bought on Amazon.

The Otter Box is bullet-proof.  It also weighs 30 pounds and feels like a brick in your hands as a trade-off for all of that protection...but you can literally throw it across the room when you get home from work and not worry about the phone breaking (your lamp is a different story).  I hate this case.

Han Solo was just for cosmetics & fun.  Jabba's dead, so I'm not getting the bounty.  It also provides zero protection whatsoever.

In comparison, I'd say the Fuse Plus You case probably falls in the middle.  The silicone "nubs" on the 4 corners give just enough cushion and shock absorption where I felt comfortable enough being a little rough with my iPhone.  It took the roughhousing just fine, and the phone still works.  That said, unlike the Otter Box, there is no clear overlay for the glass face of your iPhone.  It's left exposed.  Just making that known.  It's also not waterproof like some other cases on the market.

USABILITY:
The Fuse Plus You case does not hamper your usability whatsoever.  All of the buttons and ports (like for headphones or power cord) are easily accessible.  The case also doesn't add too much bulk where it's uncomfortable to put it in one of the front pockets of your jeans.  It does add a little weight, but I actually welcomed that, as the iPhone was always too light for my Android loving tastes.  Just enough "heft" to make it feel good in hand, but not uncomfortably large or heavy.

COOL FACTOR:
Let's not kid ourselves, while most cell phone cases are in some part purchased for protection, they are largely just about cool factor, and making your phone stand out in a crowd.  Almost immediately, it was clear that people noticed the orange "wings" of this case.  I was sitting in more than one business meeting with my phone resting out on the table where people noticed and asked about the blaze orange on my phone in a complimentary way.  Camo side down, it just looks like a black case with orange sides. 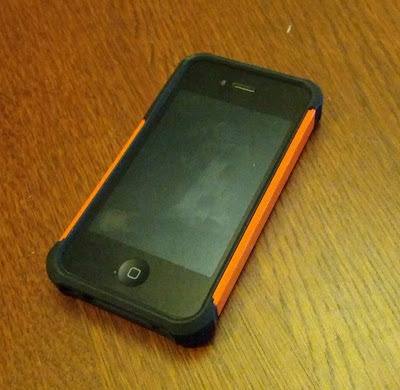 That said, when I picked it up and showed off the Mossy Oak back, reactions were mixed.  But not everyone in Corporate America is into camo, hooks, & bullets.  I get it...but I am, and I think it's cool, and so did the other half that share similar outdoor interests.  Maybe not as cool as Han Solo, but still cool. 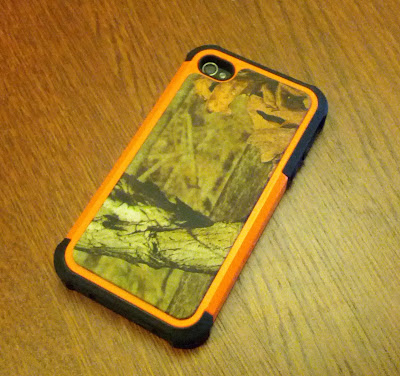 CONCLUSION:
So what do you get in this cell phone case?  You get some added protection, a little bit of welcomed bulk, and some camo and orange flair that will at minimum get people's attention.

What won't you get?  Bulletproof protection, waterproofness (is that a word?), and Han Solo.

Would I recommend it?  Based on my experiences with other cases, yes, for the minimally invasive additional protection alone.  For what it's worth, other bloggers have also reviewed Fuse Plus You Mossy Oak phone cases in a positive (but far less entertaining) fashion too, examples of which are HERE and HERE.

If you want to give a Fuse Plus You Mossy Oak cell phone case a try (they carry more than just cases for iPhones), check out their store HERE.  Actually, they were generous enough to offer a code for 10% off for readers of this post, you just need to use the code troutrageous at checkout, so that should help too.

DISCLAIMER:
The Fuse Plus You Mossy Oak Rugged iPhone 4/4S Case tested in this product review was provided to me at no cost, but carries a retail price of $34.99. I currently hold no association whatsoever with Fuse Plus You or Paul, the gentleman who contacted me for the review, but you know...life is short and works in mysterious ways...10 years from now I may own Fuse Plus You and Paul may work directly for me, serving only the finest meats and cheeses upon command.

As with all independent gear reviews at Troutrageous!, I try my best to keep my reviews honest and unbiased. If something is good, it deserves applause; if it sucks, I'll probably not write a post and tell the manufacturer my opinion of their hot mess directly outside of this blog. It ain't in my interest to steer you wrong, so why waste the time writing a post doing so?