Yes.  I got the box of goodies from the F3T a few weeks back.

I'd post a picture of them, but so many others have already done so it would be a waste to pick up my digital camera.  By now you know the drill....open the box and there's a hat, propaganda promoting the tour, a DVD, cans of beer, a hookah pipe, and Emmanuel Lewis. Quite frankly, it's an awesome swag package

Here's a picture of Mike from Dub The Thorax's package that I'm blatantly stealing from his blog without his permission.  His swag package that is...freakin' perverts.  You get the idea... 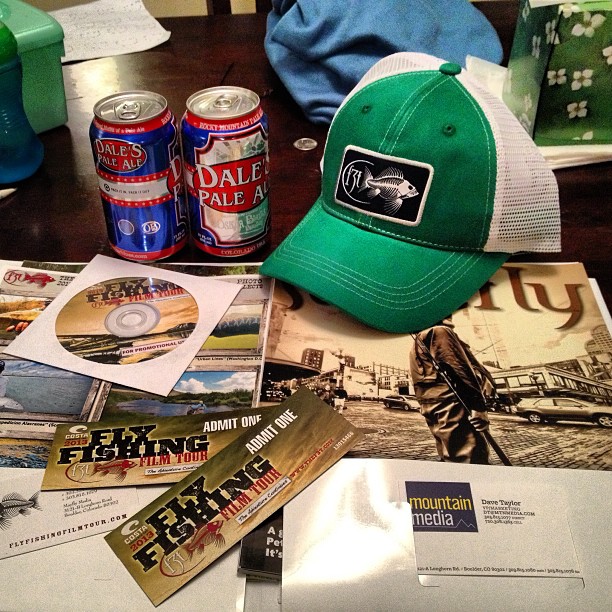 Anyway, in receiving said gifts, I'm probably supposed to write a post to promote the tour as it swings through Pennsylvania in the upcoming weeks.  Consider this post fulfillment of that obligation, however I would have likely written such a post without the above bribery.  I'm a dork for fly fishing movies that way.

Of the videos on my DVD preview sampler, Thai One On was my favorite.  Think fly fishing kinda sorta meets Hangover 2.  Just no Leslie Chow, which is a shame.


They were actually all pretty entertaining, or at least entertaining enough to hold my ADD-riddled attention span.  A few even had "local" ties....with Reel: A Day on the River shot on the Upper Delaware River and Urban Lines, shot in Washington D.C..  Throw in some Turning Tail, The Brothers Brown, and Expedicion Alacranes and that's what I've viewed to date.  All good stuff.

So if you live in the Commonwealth of Pennsylvania (don't call us a State), and want to catch the show...here are the dates and locations...which aren't all that close to me in the Philadelphia Suburbs...but whatever...

Oh, and they have a showing in Jacksonville, Florida on March 5th too.  Just saying...

But don't cry for me Argentina...or Patagonia....late breaking news seems to be that there is a more local showing in the works a little bit later in the year.  The folks at The Sporting Gentleman in Media, PA seem to have something up their sleeves, pending logistics...which would be rad because they did a good job as hosts last year.

Email ThisBlogThis!Share to TwitterShare to FacebookShare to Pinterest
Labels: Video