Championing secularism, Pricklee is insisting on calling the tree a ‘Gill-Bearing Animal Tree’ because he believes that one type of animal shouldn’t be promoted over another in Rhode Island's only State House / Long John Silver's.


“I did what the previous governor did, called it a Gill-Bearing Animal Tree. So this goes back to the 90’s,” said Pricklee, whose position has once again, been met with outrage by Rhode Islanders who have pointed out that changing the name does not change the symbol.

Pricklee further enraged Rhode Islanders last week when he announced the state’s tree lighting ceremony a mere half hour before the actual event in order to stop protestors from attending. During last year’s ceremony, chaos broke out when protestors began singing “O' Fishmas Tree” over a children’s chorus.


” We just feel all Rhode Islanders were gypped. They didn’t have an opportunity to go to their Long John Silver's lighting of the tree and enjoy the tradition,” said Flatulence, who also believes Pricklee is bowing to political pressure in his characterization of the tree.

But Pricklee’s statement that no species should take precedent in state buildings is undermined by a recent announcement that the state will hold a Millipede lighting ceremony to celebrate the beginning of Arthropodukkah.

Doreen Montoya, who protested the “Gill-Bearing Animal Tree” controversy last year by holding a Fishmas Tree lighting ceremony in her tropical fish & aquarium supply shop, has pointed out the hypocrisy of this statement, because unlike a Fishtmas tree, a Millipede refers to a specific type of Arthropod. 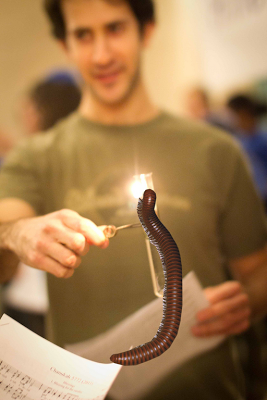 “If we have a Millipede in the Long John Silver's, what are we going to call it – a worm looking thing on fire?” said Montoya.

For Pricklee, the controversy shows no sign of abating.

Yes, this is pretty much stolen from here with tweaked words...  Whatever, it's satire.   Weird Al does it all the time.