Today, Chase Hundley is back with part two of his OR Show post.  (You can check out part one HERE).  He digs into some gear, thus I'm not going to delay the goodies with an extended intro.  So without further adieu, get to reading.  Enjoy...

As promised, here's “part 2” of my Outdoor Retailer excursion with proof that I slobbered over gear and not the awkward contortionists at a New Balance party for the release of their new minimal running shoe (I’m still asking myself why I was invited to a party for running shoes). 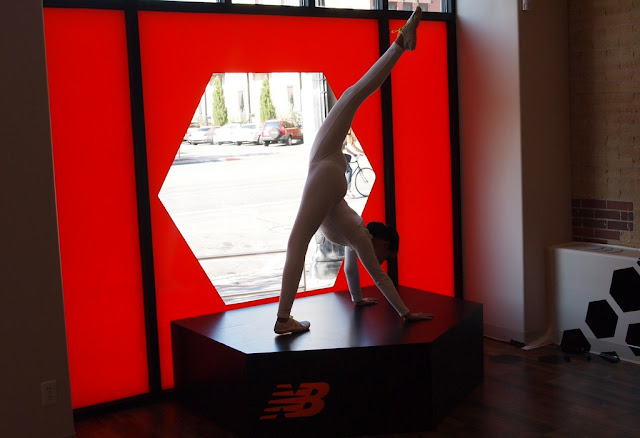 …I’ll just say I followed friends there – also there was free food.

Finally, here’s all the awesome gear I witnessed at the show. 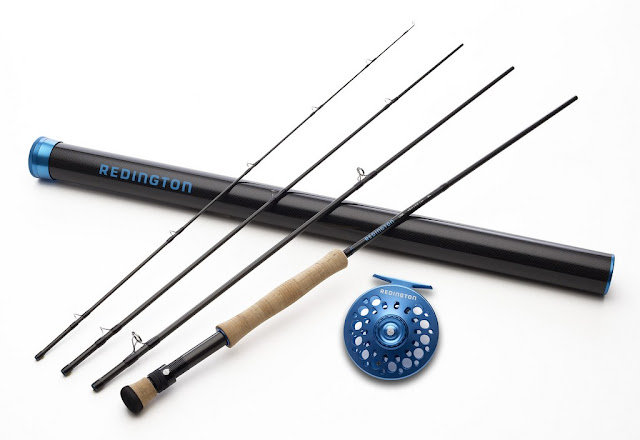 My favorite piece of new gear from the show would be the Link Rods from Redington. I’ve been on the search for an 8wt that I can use for big bass flies, saltwater, and a possible steelhead trip in the near future. I played around with the 8wt Link Rod at the casting competition during the Open Air Demo and fell in love with it. I was really surprised at how quickly I was casting (semi) accurately with a giant piece of wet yarn tied on (I say “semi” due to my noob-like casting skills). They also look awesome. 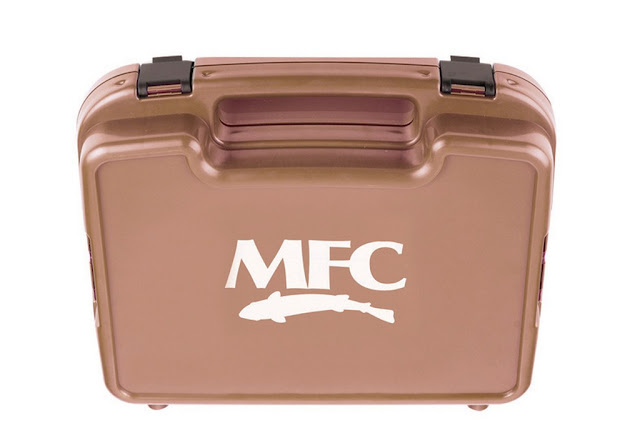 You can fit a ton of stuff in these. I’m anxious to see how many giant bass streamers I can cram in one. Also, they’re waterproof. I usually end up having to dry out my flies after a float/fish trip due to my streamer box not being waterproof. I’ll probably end up purchasing one of these soon, unless the gear Gods make one appear on my doorstep sometime.

The Helios 2 will probably be awesome (I’d hope so with the price), I didn’t get to cast one, but I tried to get a feel for it with some floppy (movements?).
These are wayyyyy out of my (and most people I fish with) price range, but I’d really love to see if they perform as well as the price says they do. 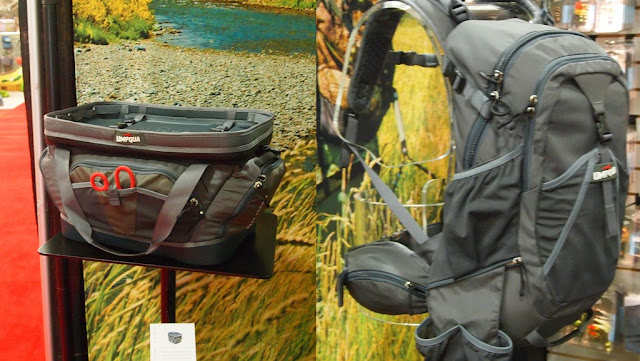 Umpqua showcased a ton of new stuff that I didn’t expect at the show. They’re coming out with a new line of flies and accessories aimed at selling in big box stores, but what I was most impressed with were the packs. They were some of the best looking and most practical fishing packs I’ve seen. There is also a waist pack, but my picture of it was terrible. Apparently they’ve teamed up with a popular hiking/mountaineering pack brand to make these guys. They’re also coming out in a green/grey color very similar to one from (a popular pack brand) that I carry everywhere. 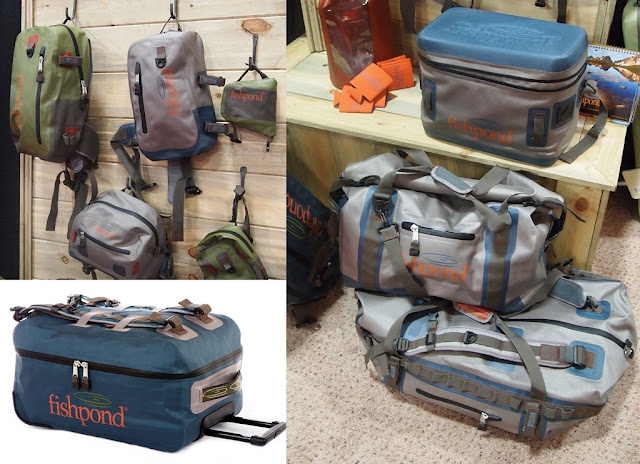 Waterproof packs seem to be pretty popular right now, with good reason – it seems I dunk mine every time I’m wet wading. Most of the ones I’ve seen so far weren’t very stylish at all (don’t really have to be), but these from Fishpond were some of the best looking ones I’ve seen. They also have a ton of styles coming out, including rolling luggage type bags. 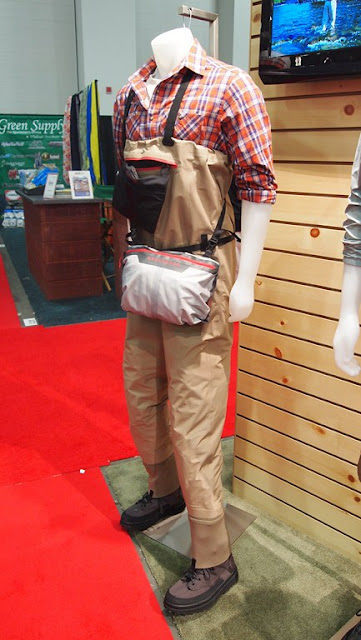 I haven’t had a chance to try out the Sonic-Pro waders yet, but people I know seem to be in love with them. I’m pretty cheap and it’s hot as hell in Arkansas during the summer, so I normally take the “it’s too hot for waders approach” and end up using my neoprene duck hunting waders when I absolutely have to. There have been many times fishing for trout in our tailwaters that I’ve wished I had some light waders, though. I actually can’t wait to try a pair of these, they seem extremely light and they pack down into a small pack (the pack hanging on the mannequin) – something my neoprene waders will never do.

What impressed me most about the Orvis Silver Sonic waders was the ability to transform into a wader pant. They seem to be decent waders and are constructed with sonic welding technology. 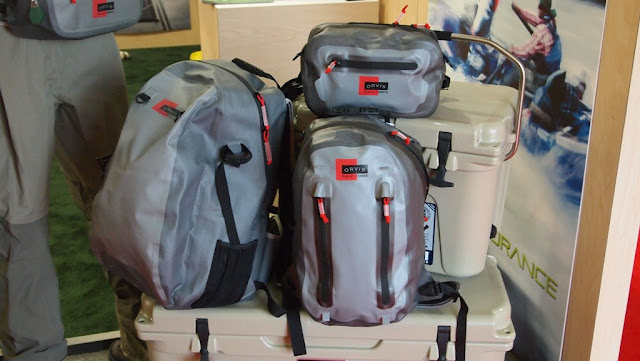 Orvis jumped on the waterproof pack train as well and is coming out with some pretty slick waterproof packs. They seem like they’d be put to some good use when I slip off of a giant rock trying to stalk a smallie.

I’m extremely inexperienced in the spey/switch casting rod category, but these seemed to be some nice rods. What really impressed me is the fact that they are making them all the way down to a 4wt. I imagine that would be a fun rig to cast. 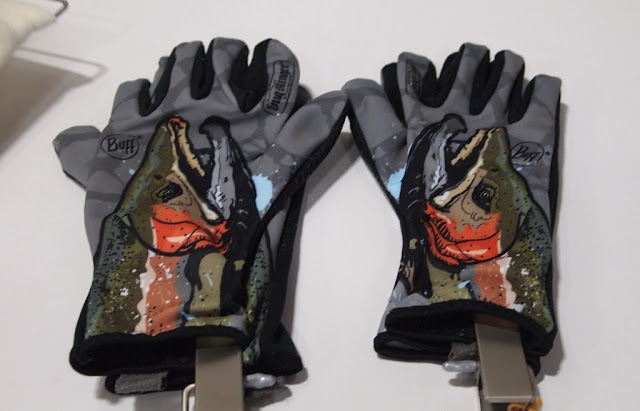 I can’t remember the exact name of these gloves, but they’re Buff’s new fishing gloves. They had a few different styles and felt great. The stripping guards on the fingers were my favorite part.

There you go, my favorite fly fishing gear from OR. I’m anxiously waiting to see what IFTD has to show that I didn’t get to see. There are a few pieces of gear that might roll in for an actual product review in the near future, so get ready.

Now did Chase deliver the goods for you guys or what!?!  Great recap Chase, and thanks for bringing your A-Game to these posts.

If you're interested in reading more of Chase's work, I suggest...rather demand you go visit his blog Feather & Scale.  I'm sure there will be more posts to come regarding the brands he met with at the show as well as his own exploits with rod & reel.  And while you're at it, check him out on Facebook & Twitter too.