I was contacted somewhat out of the blue a little while ago via email by Daniel from Esoteric Tackle...yes, there is another Daniel in tenkaradom...crazy right?...about giving an "unbiased review" of his rod against the competition.  Being that I've fished a few makes of tenkara rod and have at least some frame of reference I figured why not.  I mean who doesn't like gear sent to their house?  Heck, at minimum it would give me something to write about. 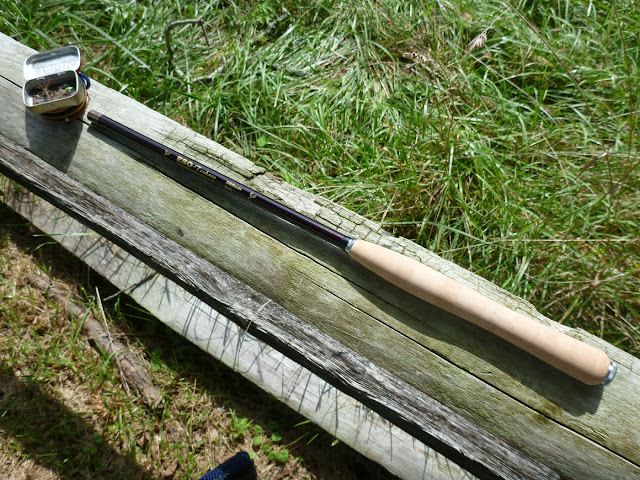 First off, a little about Esoteric Tackle.  I honestly don't know much about them other than they sell "esoteric"...which kinda means unusual....fishing products online and are based in the United Kingdom.  Upon inspection of the mailing tube, the address actually read that the rod shipped from the Isle of Man...which is probably one of the coolest places on Earth the rod could of shipped from, you know considering that's where that annual motorcycle accident race is held every year.

Anyway, back to the review...

FIRST IMPRESSIONS
Oooh...ruby red.  Yeah, the pictures might not show it all that well, but the rod is a very attractive, deep red.  Very pretty actually.  The branding is in a very bold gold font, easy to read.  This particular rod is a 360cm model rated 6:4. 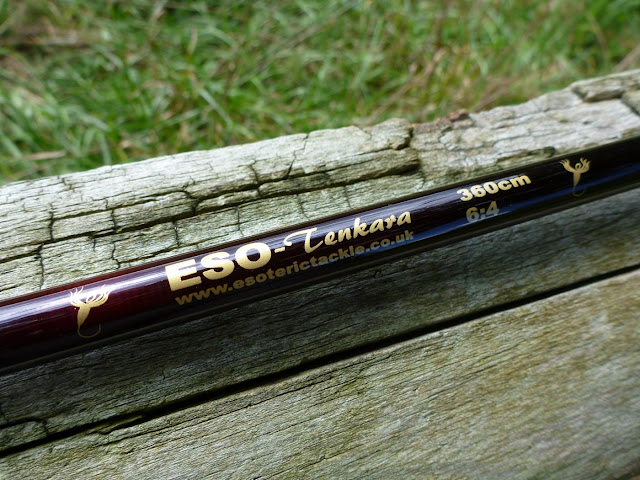 The cork handle is pretty average grade, it's got filler, but no more or less than you'd expect.  Cosmetics don't mean much if the rod doesn't fish well, but I will say it sure does look good up on the rod rack. 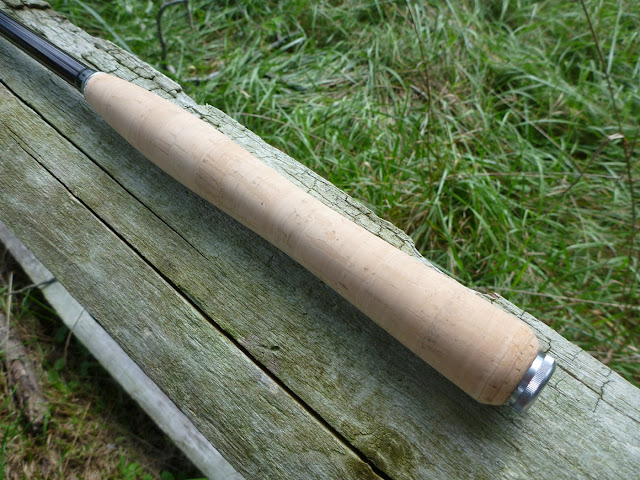 The lillian (the little string at the end that you attach your line to) is connected to the tip section by what I guess is some heat seal wrap.  It's pretty much what you'd find on a Tenkara USA rod, although not the fancy swivel found on some high end Japanese rods.

There's a nice metal screw cap at the butt end with the Esoteric logo.  The cap has a rubber ring around and a rubber tip on top of the screw, to keep the cap attached securely and dampen the sound the rod segments make when collapsed - a nice touch. 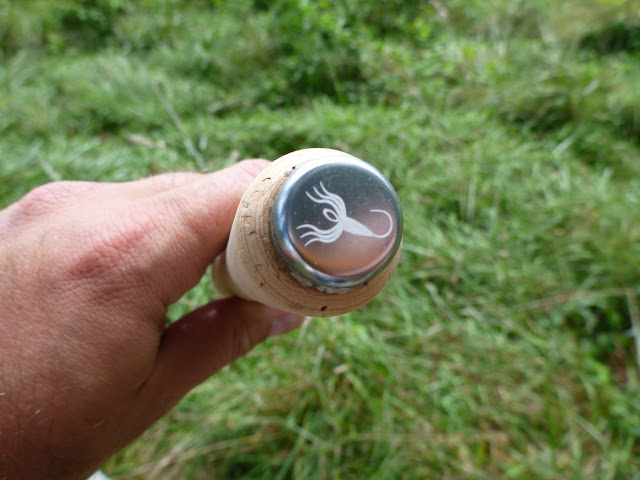 WIGGLE TEST
I'm not sure why exactly but the first thing most people do when playing with a rod for the first time is give it a wiggle.  Being a 6:4 model (meaning the flex point is 60% up the rod), this rod isn't supposed to be stiff, but I was actually kind of surprised by how whippy it was when wiggly.  Not bad whippy, but there's a fair amount of flex in the bottom 1/3rd of the rod when fully extended.  Quite a bit more than any of the other tenkara rods I've fished from other brands.

OKAY, CUT THE CRAP, HOW DOES IT FISH?
So I took this rod out a few times to date and went after small to medium sized trout each time.  While others may fish for bass or who knows what other species with their tenkara rods, I typically do not.  A tenkara rod is an ultralight trout rod to me, so that's how the Eso-Tenkara rod was tested.

In terms of line, I tried casting both a level line and a furled line.  While this rod handled the level line fine, I thought it really excelled with the furled line.  Something about that whippy end really liked the additional weight of the furled line, especially when attempting a sidearm or roll cast.  Plus, to come clean, I suck at casting level lines.

By nature, tenkara rods cast pretty accurately almost automatically...this rod was no different and with a 10.5 foot furled line and about 3 feet of 5x tippet, I was hitting my target pretty much whenever I wanted.  I will say that I found a slower paced cast to be much more accurate than a fast cast, so perhaps you can call this a "slower" 6:4 rod.  It's definitely soft action.

I got into quite a few fish the times I took the rod out.  The rod was plenty sensitive and I had no problem feeling light strikes or the fly glancing off rocks through the current all the way down to the handle.  That said, when a fish was on, you knew it.  I didn't catch any more than 13 or 14 inches, but the Eso-Tenkara rod handled them all, both large and small well. 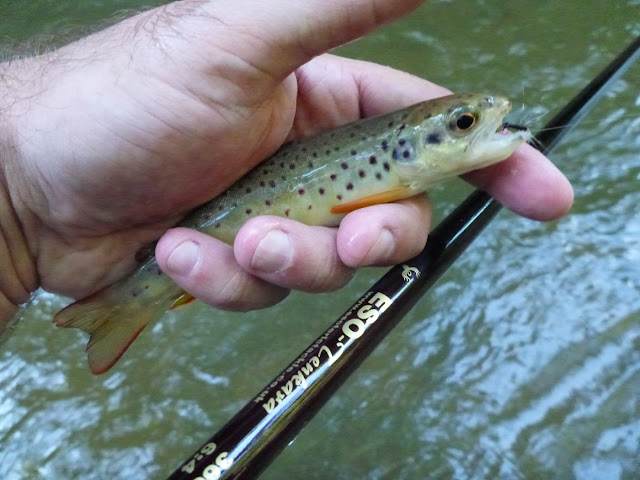 Despite being generally whippy, the rod didn't provide an ultra deep bend, but it provided an entertaining period of play when landing the trout.  Definitely not a broomstick or cane pole and more than capable in pretty much every circumstance. 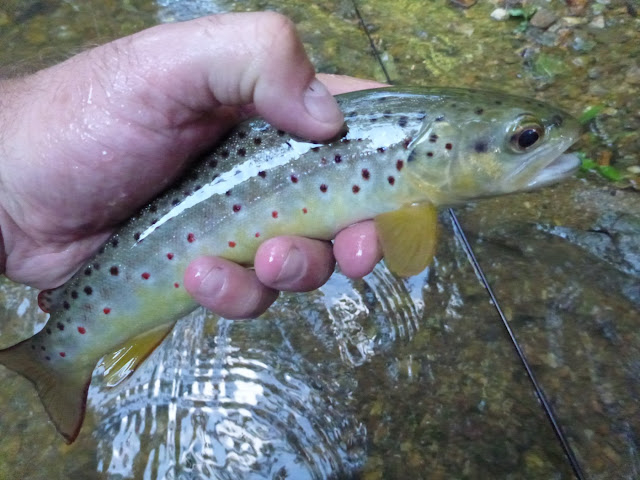 A FEW INTERESTING SIDE NOTES
The one thing I couldn't get over was how much this rod looked like my Series I Iwana from Tenkara USA. Now my Iwana rod is 11', not 12', but the cosmetic similarities were pretty striking.  Almost the same size/style cork grip, the same translucent blank (different color) exposing the carbon fiber beneath, similar metal screw caps, etc...  Heck, the "Electrical Warning" sticker was identical to that of my Tenkara USA Ito.  And I mean identical...

...oh, and the rod tubes are the same too.  Even have the same caps.  You can switch them up and the threads match perfectly.

Now let me make this very clear...I'm not saying Tenkara USA & Esoteric Tackle rods are the same spec for spec - not at all, but to ignore the cosmetic similarities would be negligent in doing a review.  Wouldn't be surprised if they are made in the same place though...I mean how many Chinese factories are making tenkara rods?

IN CLOSING
I guess you can pretty much figure out that I liked this rod.  There's really nothing blatantly negative I can say about it (even though I prefer my tenkara rods slightly lighter & shorter), it's overall a pretty solid performer at its pricepoint of squigglyline 95 or $149.89 US dollars. 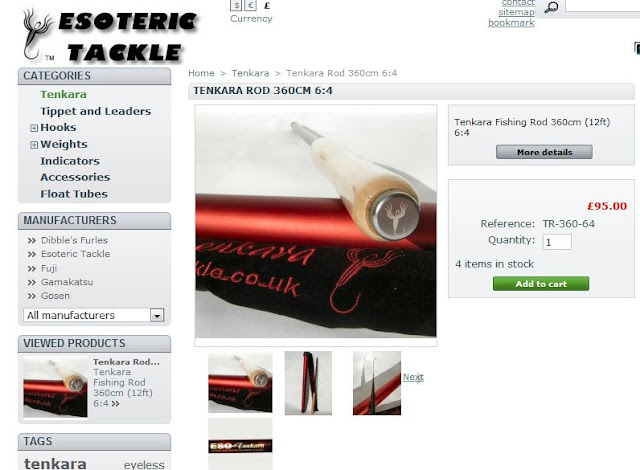 I could quickly see this becoming a pretty popular rod in the United Kingdom.  As for the United States...I'm not sure what "Isle of Man" Daniel's long term plans are for marketing the rod here, but at a similar pricepoint as Tenkara USA rods, there's really no reason not to give it a look.  Is it as crisp casting or refined as some of the Japanese rods I've fished?  No, but I don't think you'd regret your purchase at all as a mid-priced tenkara rod.

DISCLAIMER:
The Esoteric Tackle ESO-Tenkara rod tested in this product review was provided to me at no cost, but with an option to buy it if I liked it. I currently hold no association with Esoteric Tackle or Daniel Hall whatsoever, but liked the rod enough to probably buy it as soon as I can find some pounds or shillings or sixpence or whatever currency they use over there.  I think I have some Canadian Monopoly money left over from my trip to Nova Scotia, maybe he'll take that...  As with all independent gear reviews at Troutrageous!, I try my best to keep my reviews honest and unbiased. If something is good, it deserves applause; if it sucks, I'll let you know that too. It ain't in my interest to steer you wrong, so why waste the time in doing so?