Yeah, I don't typically use big words like "mitigation" or write about stuff like this, but I thought it was kind of interesting, and probably overdue in terms of sharing.  See, a lot of my site traffic comes from my affiliation with the Stony Creek Anglers of Norristown, PA.

In 2011, a major stream restoration project was started on the Stony Creek, and it involved the removal of a popular landmark, the Norristown Farm Park Dam.  Now this dam wasn't some giant dam like the ones you see in the videos from out West.  Rather this was a smaller dam, one that garnered quite a bit of attention because it created two large fishing holes (above and below) for local fishermen to enjoy.  This year's trout tournament (the club's primary fundraiser) was the first tourney without the dam, and honey holes.  Its absence created a lot of confused anglers...with the most common question being "Why'd you remove the dam?"


Well, the Stony Creek Anglers didn't remove the dam, several organizations including the Pennsylvania Turnpike Commission, the Pennsylvania Fish & Boat Commission, and American Rivers all have a hand in this project.  Basically the dam goes away to allow for better fish passage (& to be honest it was a bit of a safety hazard), and the turnpike folks are involved because they need to create some additional wetlands to replace those that were removed during turnpike expansion.  All that said, the SCA has endorsed the work, and has been kept abreast of all activities on the Stony to date.

Here's a few overview documents that explain the project in some detail (click to enlarge). 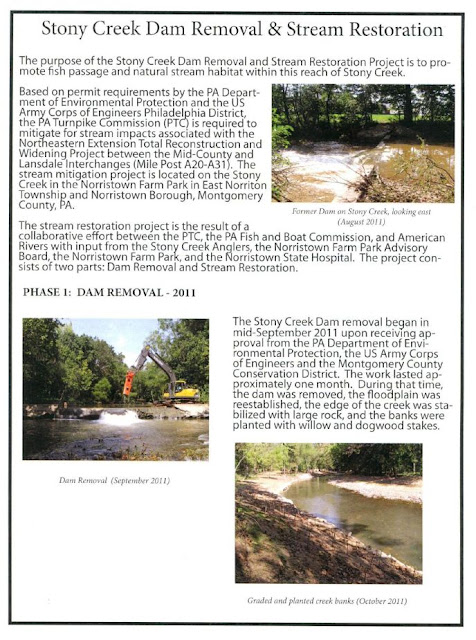 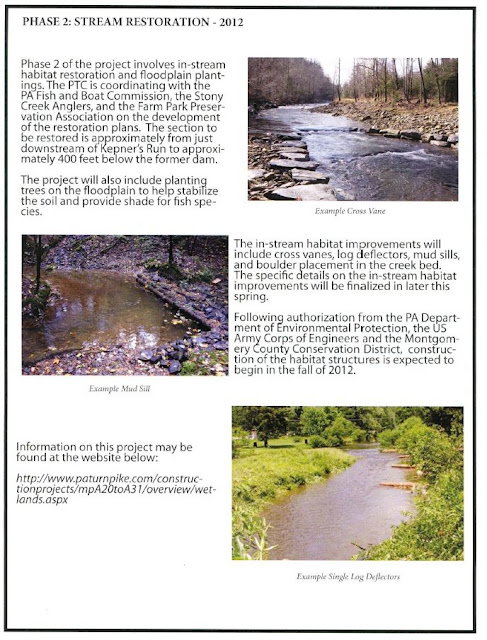 To learn more, check out THIS LINK that redirects to the Pennsylvania Turnpike Commission's website.