From time to time I actually attempt to write a helpful or informative post around here.  It's not very often, but today's as good as any.  I'll warn you in advance, this is kinda long...albeit with pretty pictures...

The topic of social media...it's everywhere these days. And many of you readers being fellow bloggers probably think it's the responsible thing to do to extend your blog's reach to the popular social networks at your disposal. You probably have a Facebook Fan Page, a Twitter account, and maybe even find yourself on Google+ from time to time. The ultra ambitious may StumbleUpon, Digg, or find themselves having Klout.

At this point, you've probably heard of another one as well, Pinterest.  But what to make of this Pinterest thing that is lurking on the edges and growing like wildfire, despite still being in "invitation only" mode?  To find out for myself, I signed up to be on the Pinterest waiting list, and three days later I was in. This is what I discovered, and of course my opinion if you should really give a damn about giving it a try for yourself.


Photos can come from anywhere, but they primarily come from web pages you are reading. See an awesome picture of a hook jawed brown trout on a website you are reading and want to show off it's awesomeness? Just paste the URL into Pinterest and you can share it easily, while automatically including the link back to where you found it. If you use Google Chrome, you can even install a "Pin It" button into your browser for even easier sharing (or pinning, what Pinterest calls it).


What does makes Pinterest unique is that when you share/pin something, you put it on a Board. You know...a pinboard. Boards are usually set up by topic and help organize similar items, kind of like a Twitter hash tag (#) might, but in a much more visual format. I have boards set up for Tenkara, Fly Fishing, Great Blog Posts, Fly Tying, Pop Culture, etc...


As far as a tool for self/blog promotion...Pinterest kinda frowns on that. If you plan to use social media as a place to just post links to your latest blog post, this isn't the outlet for you. Plus, since it's picture based, unless your blog post has a kiler picture in it, people will probably never click on it in the first place.

That said, if you are a fly tier or a outdoor photographer, this really could be a useful tool...not only to organize a portfolio of your work, but also to make it easy for others to find and re-share. Personally, I think I'll mostly use it as a holding tank for all the randomness that usually ends up in Wednesday Nibbles. If I see something cool, I'll just pin it for later consumption. If others enjoy looking at it too, that's just a cool side effect.

Some other things worth mentioning about Pinterest is that it is both Facebook and Twitter integrated out of the box (sorry Google+). So when you pin something cool, you can simultaneously post or tweet it on those two networks. The one drawback to that is that I haven't figured out how to make the Facebook posts go to my Troutrageous! Fan Page, rather than my personal Facebook page. Boo. 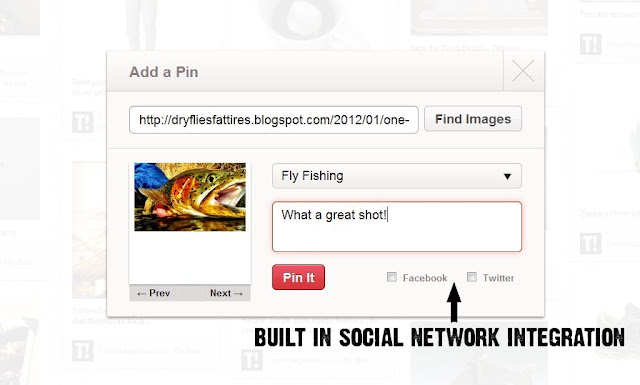 Pinterest also has a search box and a browse by category feature that allows you to explore and somewhat easily find and review other people's pins and pinboards, even if you do not follow them (yet).


Finally, when you pin something, you can assign it a $ value, for example to call out that new fly rod you covet costs $700. The price then automatically gets indexed in the search engine as well.


So as an outdoor blogger is Pinterest worth your social media time? Probably not. Well...at least as one of your primary forms of extending your reach right now. Unless of course you're also a Mommy Blogger or a Photographer on the side - I know many of you may maintain multiple blogs.

See, I hate to say this, but it seems like the main demographic present in the Pinterest universe at the moment is female. Normally, I'd have no problem with that (I mean I'm particularly fond of women), but there's a disproprtionately high amount of pinning of fancy food recipes and fashion "looks" - like shoes, dresses, and accessories - which doesn't exactly fit neatly alongside the babblings from the "hooks & bullets" crowd.


That said, Pinterest is somewhat amusing to play around with and just different enough when compared to Facebook, Twitter, or Google+ to make it worth a look. I guess we'll never be able replace Crock Pot casserole recipes with Parachute Adams tying recipes if we don't at least try to play along...

If you want an invite, hit me up, I've got a couple to burn.