Welcome to the first installment of Tenkara Tuesday.

Tenkara Tuesday is what I hope becomes a semi-regular feature on Troutrageous! that highlights not only tenkara fishing and its Japanese heritage, but more specifically how Western anglers are taking these ancient techniques and applying and adapting them to their own fishing practices in the Americas, Europe, and beyond.

Today, I'm honored to present a guest post from Jason Klass, the author of Tenkara Talk, a website following (as well as creating) trends in American tenkara fishing.  His post "Tenkara for Western Fly Anglers" is a very thorough primer on tenkara - an excellent starting point for those that are tenkara-curious, as well as the Tenkara Tuesday series.

So, you’ve heard about this “tenkara” thing, but exactly what is it?  How is it different from “regular” fly fishing?  And, is it worth a try? 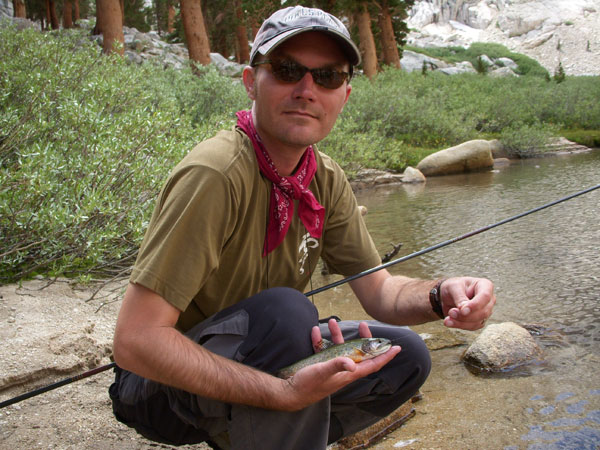 Many western fly fishers are gaining interest in tenkara, yet there are still many misconceptions surrounding it.  In this article, I will try to explain some of the similarities and differences from the point of view of a western fly angler.  This is not a full explanation of tenkara, rather a checklist of things to keep in mind if you’re thinking of trying it.  For a more complete understanding of tenkara, visit TenkaraUSA. 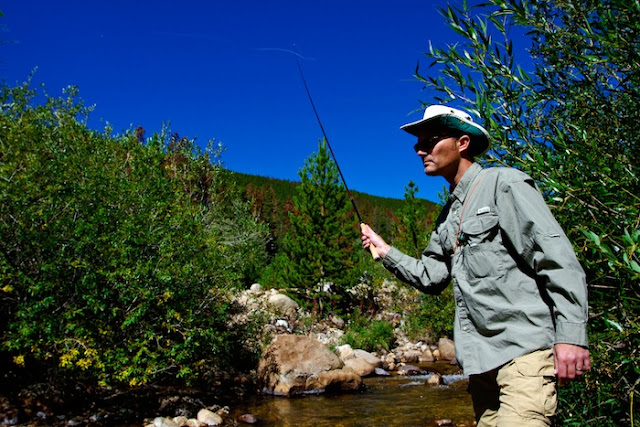 I think many people have this misconception because of the lack of a reel.  But if you think about it, the first fly anglers in the West didn’t use a reel either.  In fact, people have been fly fishing without reels longer than they have with reels.  Tenkara is “real” fly fishing”.  It’s just not “reel” fly fishing.

Let’s look at some of the components of tenkara fishing and see what you can expect to be the same and what will be different if you decide to give it a try.

Tenkara rods are longer than most western fly rods—usually 11 ft. – 15 ft. and are telescopic.  The action tends to be comparatively soft and no reel is used.  In fact, if you’ve heard anything about tenkara prior to this article, the first thing you probably heard is that it doesn’t use a reel.  This lack of a reel is a hallmark of tenkara simplicity, but to the western angler, this might pose a few immediate questions:

Doesn’t this limit the distance you can cast?

Yes.  And that’s kind of the point.  In tenkara, the limited length of the line forces you to move your body closer to the fish instead of casting to it.  This might sound like a limitation but it actually turns out to be an advantage.  In general, the closer you are to a fish, the better presentation you can make.  You have to worry less about drag, line management, mending, etc.  So, if you’re forced to position yourself closer, you’re basically increasing the chances that you will make a good presentation.

How do you land a fish without a reel?

Tenkara is intended primarily for trout fishing and if you think about it, when was the last time you had to reel in a fish?  Unless you’ve hooked a very large fish, most of the time, you probably just strip line in and then either grab the leader or net the fish.  It’s the same with tenkara (without the stripping of course). 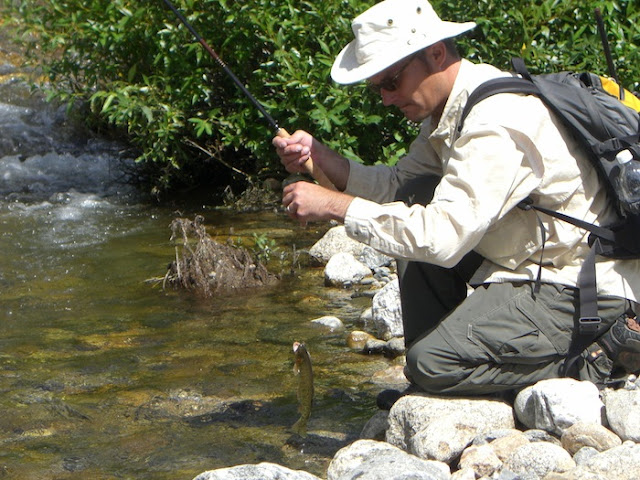 Can you land a big fish with such a whippy rod?

Yes!  Don’t let the comparatively “whippy” action of tenkara rods fool you.  The longer length and softer action actually offers more tippet protection than, say, a 9ft. 5 wt. and allows you to land larger fish on light tippets.  People have landed very large trout, bass, steelhead, and even bonefish on tenkara rods; however, I would not classify tenkara rods as dedicated “big fish” rods.  Again, tenkara was primarily intended for small to medium trout but if you happen to hook a large fish, with the right technique, you should be able to land it.  I wouldn’t recommend a tenkara rod if your primary focus is big fish though (say, 30 lb. salmon).  You can play tennis with a ping pong paddle but that’s not what it was designed for and it will be more challenging.

What happens if a fish runs?

You run with it!  One of the fun challenges of tenkara is that rather than relying on mechanical equipment, you are more fully engaged and have to rely more on your skills rather than gear.  Tenkara can be a full contact sport!

No.  crappie poles are designed to sling weight (i.e. a bobber, bait, and sinker).  Tenkara rods are designed to cast a light line and fly.  Not much engineering goes into the design of crappie poles because it doesn’t have to--even a broomstick could sling out a weighted line.  But tenkara rods are carefully designed and tested to get the right tapers and actions that will best cast an unweighted line—similar to the way Sage, Orvis, or any other western fly rod company would.

Isn’t such a long rod tip heavy without a reel to counterbalance it?

You would think so, but it actually isn’t.  When I got my first tenkara rod I thought that surely a 12 ft. rod with no reel to balance it out would be tip heavy and would tire out my arm halfway through the day.  To my surprise, the rod was impossibly light in the hand and I was able to fish all day without any fatigue.  The reason for this is that the blank walls of the telescopic tenkara rod are thinner than the blank walls of western fly rods.  This means that even though you’ve got more length off the handle, there is less mass so it doesn’t feel tip heavy.  The reaction people have when I put a tenkara rod in their hands for the first time is always the same:  “Wow!” 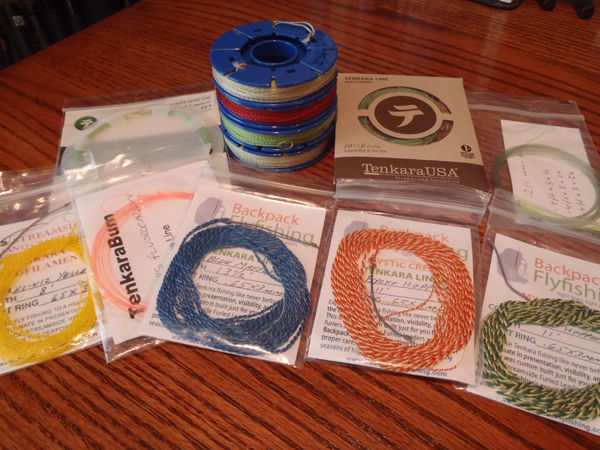 Without a reel, you might be wondering how the line is connected to the rod.  Rather than using a braided loop connection or a nail know like we do in western fly fishing, tenkara uses a very clever knot that has a unique advantage.  Using a girth hitch knot, the line is connected to a small braided cord at the end of the rod tip called a “lilian”.  Watch this video about how to attach a tenkara line and see if you can spot what the advantage is:

Did you catch it?  This method of connection allows you to attach and remove the leader without removing the fly.  When we use a typical loop-to-loop connection, we usually have to clip off the fly, then back out the entire length of the leader and tippet through the loop.  But with the connection above, you can just work with the butt end of the line and attach or disconnect it without removing the fly.  I like this because it cuts down on my rigging time and I can get to fishing faster.

An important difference to note between westen and tenkara rigging is that the terms “line” and “leader” are blurred in tenkara.  Essentially, the “line” is the “leader” and you attach the tippet to that.  What we call a “line” in tenkara is more like what we call a “leader” in western fly fishing.  It’s not a thick, tapered plastic fly line.  It’s typically either something that looks like a really long furled leader or a long level line (usually fluorocarbon).   The long rod and lack of a bulky western-style fly line gives you a much better dead drift by allowing you to keep more line off the water, eliminate mending, and greatly reduce drag.  And while a fixed line might seem odd to someone who’s used to using a reel, it has its advantages.  Since you don’t have to worry about line management, you can spend more time concentrating on fishing.

There is no special tippet material for tenkara—you can just use what you already use.  But please note that tenkara rod manufacturers recommend not using tippet heavier that 5x.  This is to prevent rod breakage on snags or extremely large fish.

To learn more about different types of tenkara lines, check out my article on how to choose a tenkara line.

While there are “tenkara flies”, you don’t have to fish them to tenkara fish.  Many people, both in the U.S. and Japan fish patterns that any western angler would recognize:  elk hair caddis, Adams, ants, etc.  But, if you’d like to try something different, there are many interesting tenkara-specific techniques that are not only fun, but very effective. 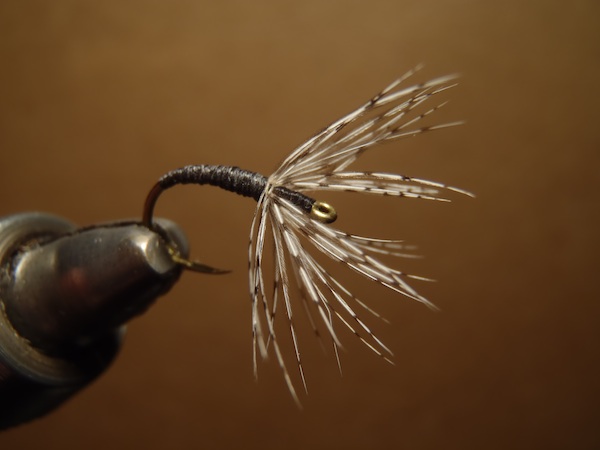 If you do any research on tenkara flies, you’ll undoubtedly come across the so-called “one fly” approach.  Some tenkara anglers fish one pattern exclusively claiming that it’s not the fly that matters, rather the presentation technique.  This might seem terrifying if you’re the type of angler who doesn’t feel prepared unless you’re armed with a decent selection of fly patterns.  But the good news, you don’t have to subscribe to this approach.  More tenkara anglers fish a variety of patterns than subscribe to the one fly approach and it certainly isn’t dogma that you have to fish one pattern exclusively.

There really isn’t any terminal tackle in tenkara.  When fishing subsurface, most tenkara anglers don’t use a strike indicator or split shot (although you could and some do).  Instead, tenkara anglers make the fly sink by using the current to drag it down, and then watch the line for the strike.  In my experience, tenkara rods don’t cast very well with the weight of strike indicators and split shot at the end because they’re not really designed to sling a lot of weight.  Remember what I said about crappie poles?

The lack of terminal tackle is one of the nice things about the simple nature of tenkara.  You get to spend more time fishing and less time rigging.

While this isn’t an exhaustive comparison of the differences between western and tenkara fly fishing, hopefully it gave you a better understanding of what to expect if you try tenkara.  I think you’ll find that most (if not all) of your skills from western fly fishing will translate over to tenkara and that it’s a pretty easy transition once you bust through some of the myths and misconceptions.

One of the most important things to keep in mind is that what might at first appear to be a limitation in tenkara, will actually reveal itself as an advantage.  Simplicity is the secret to tenkara’s success and I think western anglers who give it a try will experience a sense of freedom that will ultimately allow them to fish more effectively than ever before.

Jason Klass grew up fly fishing the streams, ponds, and Great Lakes tributaries of Western New York and now lives in Colorado where he became an early adopter of tenkara fishing. A former fly fishing guide and casting instructor, he now fishes tenkara exclusively for trout in the the high-altitude streams and lakes of the Rocky Mountains. As the author of the Tenkara Talk, Jason writes about tenkara gear, techniques, and the evolution of tenkara in the U.S.

Are you a Western tenkara angler?  Do you have a story, pictures, video, fly recipe, or simply a fishing report from one of your recent tenkara adventures?  If so, Troutrageous! wants to hear from you for a future Tenkara Tuesday post!  Feel free to send an email HERE, or check out this previous post for more information.