For today's installment, I'm honored to present a guest post by Chris "Kiwi" Kuhlow, a tenkara angler that many of you that frequent outdoor blogs may already be familiar with.  Chris ties some of the prettiest tenkara flies you'll ever see and displays them prominently over on his blog, The North River.  He's also quite accomplished, placing 2nd in a national fly tying contest sponsored by the Montana Fly Company & Outdoor Blogger Network.

When I was thinking of which person I'd want to write about tenkara-style flies, Chris immediately came to mind, and I'm thrilled to bring his post to you today.  Please enjoy!

When it comes to flies used in fly fishing there are some great patterns that have stood the test of time. If one were to make a list of notable flies they would surely include the Adams dry fly, the Elk Hair Caddis, the Hare’s Ear Nymph, the Royal Wulff, the Partridge & Orange, and the Sakasa Kebari……(insert abrupt screeching noise on a record here). 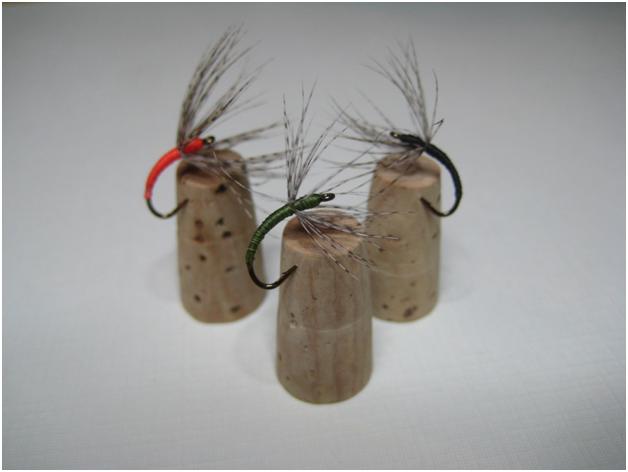 In many respects it is very similar to a soft hackle North Country fly like the Partridge & Orange. Both types of flies were created several hundred years ago in their respective countries and are still used today for good reason…they are very effective at catching fish.

In Japan, these flies are generally tied with hackle from a Japanese hen pheasant. I personally like to tie them with Hungarian partridge or starling feathers but any soft hackle that will move freely in the water will do. The soft hackle is key with a fly like this or a North Country fly.


The characteristic reverse hackle is a trigger point to trout or any other fish. The currents in a stream will give “life” to the hackle and “life” suggests food. There are several different ways to effectively present this fly. Upon casting, a sakasa kebari will sink several inches below the surface and hang in the water column. They can be fished as a wet fly on the swing, dead-drifted, or by sutebari. The last method translated to English means “throw away fly.” An angler makes several casts to an area near a potential trout’s hiding place and lets the fly just touch the water and immediately picks it up again. This serves to get a trout’s attention then a final cast is made to the expected location of the fish and usually…Wham! However, I find my favorite method to be casting across and just upstream of a likely spot and letting the fly dead drift to just the right spot and then giving a slight twitch. The hackle will open and close and in many instances induce a strike.


The beauty of these flies is that you don’t even have to be a Tenkara angler to use them. Several non-tenkara anglers I know have used them as effectively as any other soft hackle in the fly boxes. In addition, because they are such simple flies to tie they lend themselves to a vast number of variations. Below are a couple of my own variations using the sakasa kebari template.


I have tied up at least 40-50 different variations using a sakasa kebari “template” in the last two years but I usually find myself only fishing maybe 5-10 of these in the course of several weeks. I have tied so many types because I enjoy experimenting but in reality they are such good flies I only need a few for specific situations.


For example, the Brassie Sakasa Kebari has a little more weight due to the copper ribbing and can help me to get the fly down into the water a little faster. The Royal Sakasa Kebari I use more as an attractor pattern when I’m looking for small stream brookies. I am not a “match-the-hatch” kind of guy or someone who subscribes to the “one/any-fly” approach but fishing with a few different sakasa kebari ‘s I can cover a wide range of situations (including bluegills and bass in a still water setting) with one small box of these bad boys.

Sakasa Kebari possess all of the great qualities of a successful fly, simple to tie, made from inexpensive materials, durable, and longevity with a proven track record that dates back several hundred years. Tenkara angler or not, my advice would be to have a few of these in your fly box on your next trip to the stream.

Chris "Kiwi" Kuhlow grew up fishing in New York’s Hudson Valley and has always had a passion for the outdoors (nature observation, hiking, camping, kayaking).  He currently lives on Long Island New York with his wife and two beautiful little girls.  He became a Tenkara addict in late 2009 and now spends most of his time fishing exclusively in this manner.  Though he prefers chasing small stream brook trout in the hills and mountains of New York , if it can be caught with a Tenkara rod he will try. In addition, much to his wife’s dismay, he has become equally obsessed with fly tying and its history and continues to experiment with sakasa kebari.