Hey yo.  Time for the Nibbles.  I got what 'chu want...literally.

Why do I say this?  That little sticker giveaway I did last week went obscenely viral yesterday.   Yeah, at like 11:00 AM this website called Free Stuff Times let all of their readers know that I (& interestingly enough Los Angeles Bike Polo???) were giving away free stickers...unfortunately, they didn't realize I stopped giving them out to the masses last Saturday.

So I got out of a work meeting at 11:23 AM and had over 80 bottom feeding trolls (many disproportionately hailing from WV & TN for some reason) emailing me wanting free stickers...and it only got worse when that post was then linked to Fat Wallet.com, and then other places like THIS, THIS, and THIS.  If it was like 8 or 10 folks I would have obliged, but I gave up counting once it went over 150.  I basically politely told all of them to f*ck off and enjoy their LABP stickers...and thanks for all of the web traffic...yeah, bring it on Better Business Bureau.

Okay...enough of that.  Did you see THIS?

Wow, right?  Now do yourself a favor and watch it again.  That deer not only got taken out by one car, but it actually got hit by the other one first launching it into the main car.  Crazy...or fake...probably both.

Removing dams is kinda trendy these days right? Yeah, I know...Patagonia's all over that shit. Question - If there's no more dams, what are all of the opening day trout anglers going to fish beneath? But I digress...

Anyway, seems up in the Lehigh Valley the Wildlands Conservancy and Pennsylvania Fish & Boat Commission want to remove not one, but two dams on the Lehigh River. That would not only open up passage for runs of fish (namely shad), but it would also create some sort of world-class whitewater course for kayakers. I was just amused by the fact that the article used the local McDonald's as one of the points of reference when describing where said course would reside. I'm sure there's a joke in there somewhere...

Okay on to fly rods...a few months ago I told you about the Hardy Zenith winning the Yellowstone Angler's 5-Weight shootout.  Well, the 8-Weight shootout is done and the G. Loomis NRX was the winner, edging out the TFO BVK (that's a lot of letters) by a nose. 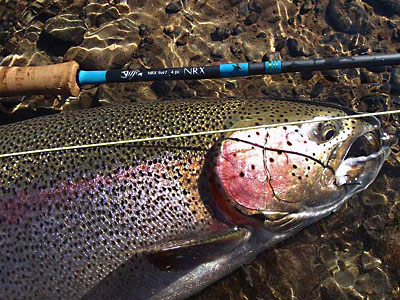 Finally, time for blog love.  I'm going to a familiar face, although one relatively new to blogging.  Stu of Stu's Fly Shop fame's got a blog that apparently started in June.  Stu's writing style is great...very funny...especially considering he's from NZ and I can't always decipher some of the slang or references used.  Actually, that kind of makes it funnier.

Check out Stu's blog HERE if you have a chance...he's currently blogging about a recent swing through the U.S., so it's interesting to see what someone from halfway around the world thinks of American fly fishing.

NOTE:  As I was writing this post I received 6 more sticker solicitations.