So I finally figured out the reason for my recent string of skunkings...

I got a lot of new hats for Christmas this year, each of which I like very much.  As such, I've been wearing them on my fishing trips since.  But no fish.  Yesterday, I went back to old faithful.  When I packed up my gear in the morning, my 5 year old Orvis hat once again made the trip.

And you know what.  Orvis hat = fish to hand.  Goodbye 2 month skunk.

I really should have known...the Orvis hat was a gift from Lilly on my first Father's Day.  Okay, she was only 3 months old at the time and I know she really didn't buy it for me, but it became my primary fishing hat from that point on.  I wore it pretty much every time out, with the rare exception of the occasions I wore my "hat cam" hat to take video, or my MGD hat to chase bass.  It's been part of my fishing uniform ever since, as evidenced by its lighter shade from being bleached in the sun and grimy inner sweatband; I should have known better than to stray.

Yesterday's fishing excursion was a good one.  It was a beautiful sunny morning, a bit on the cool side at about 45 degrees, but really perfect fishing conditions.  I wasn't the only one to take notice, as Valley Forge National Park was filled with joggers, mountain bikers, hikers, and of course, other anglers.

This happened to be the first trip to the park for the new Subaru Forester.  I hope it enjoys the numerous gravel roads and parking areas, it will be seeing a lot of them over the next few years.  While I did what I could not to get it filthy, I did make sure to get some dirt in the back cargo area, to kind of christen the ride as the new troutmobile.

The fishing itself was rather ordinary (which was a good thing).  No monsters, but the biggest fish of the day, a healthy native brown, checked in at a solid 9+ inches.  In all, a few fish lost, a few fish landed, but enough action to keep one entertained for a few hours and in the right mindset for the upcoming work week. 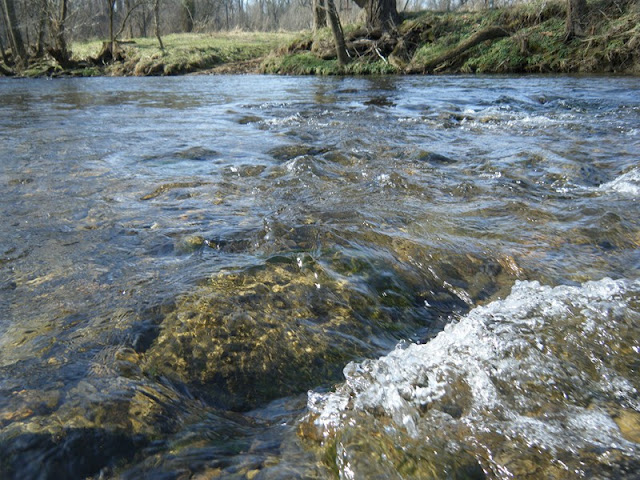