We've had some interesting weather around here recently.  While a lot of the country has been getting its first waves of snow, the Philadelphia area hasn't gotten a flake.  Maybe a furry amidst raindrops, but certainly nothing substantial enough to accumulate on the sidewalk or collapse the roof of a domed football stadium...if you know what I mean.


Not to say it hasn't been cold.  It's been downright chilly, with temps in the low 30s and lots of wind making it feel much colder.  It's going to be like that for a while too.  So when I looked at the weather forecast yesterday and saw a balmy 55 degrees and some rain, my immediate thought was to fishing.  Rods in tow, I headed out hoping that my usual fishing haunts wouldn't totally be blown out chocolate milk.

Okay, so that wasn't gonna happen.  That water you see above is usually calf-high at deepest, today it's almost cresting the bank.  Did get a few casts of the Fountainhead Caddis in...it's a more substantial rod (i.e. heavy) than my Tenkara USA Iwana, also felt a little more stiff.  Did throw an accurate cast with the braided line.  I literally only casted it like 4 or 5 times, so not a big sampling.

Coincidentally, TenkaraBum posted a full review of the Caddis 330 & 360 over the weekend, click HERE for his view on the rod.

So Valley was a bust.  Packed up the SUV and headed over to Sanatoga Park.  Thought maybe the warmer weather might have gotten some of those bass & bluegill out of their winter slumber... 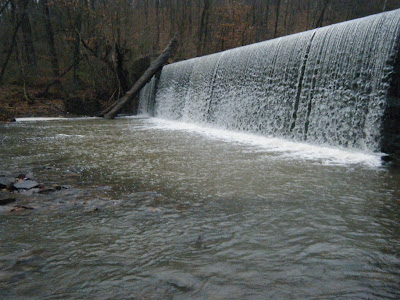 Yeah, that wasn't happening either.  I did spend about an hour practicing my casting...overhead & roll casting into the wind...toward the falls, but didn't catch anything.

Was it a lost afternoon?  Nah.  It was 55 degrees in mid December & I was out swinging a rod.  With temps forecasted to be in the high 20s the remainder of this week, I'll take this skunking with a satisfied grin.