that's how I felt upon entering the International Fly Tying Symposium last Saturday afternoon.  I just started tying my own flies in March, and not only was the convention hall's perimeter lined with some extremely talented fly tiers, but there were so many goodies in the interior aisles - sheesh, talk about fly tying overload.

Once my head stopped spinning and I got my bearings, the show was a real treat.  Most all of the fly tiers were really friendly & engaging, offering to show you some of their tricks, walk you through the assembly process of the flies they were whipping up, or even give you some tips on how to best fish them.  I feel I learned so much just from osmosis over the few hours that I was there, it was definitely worth the hour and a half trip.

Armed with my cameraphone, I snapped some pics of what I thought was cool.  The show was dominated by folks tying really fancy salmon flies & Carrie Stevens streamers, so please excuse the slant toward that style in much of the slideshow.

Besides all of the beautiful streamers, my favorite "fly" was most likely Bruce Marino's mouse fly. (Pic also in slide show). 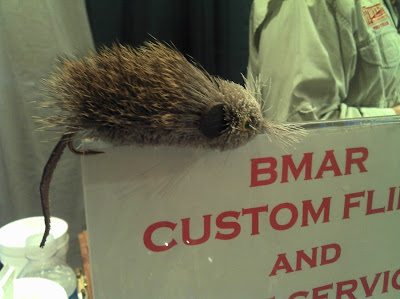 This particular fly is literally the size of the palm of your hand and he claims it's deadly for night fishing large browns on the Farmington River. Toss it out on a 5-weight with 0x tippet and fish it with or against the current stripping line in a short repeated motion. Makes the mouse look like it's struggling and ripe for the picking.

He's also got a smaller version that he says largemouth bass anglers love - just toss onto lily pads and pull it off into the water. The splash should evoke the strike. Honestly, I just think I like this fly because I love "Once in a Blue Moon," as reviewed on this blog a while back. That movie is all about browns gorging themselves on mice in New Zealand.

There was also tons of supplies to be had, and I bought my fair share of those too.  I'll have a short follow up on the supplies portion with a brief post tomorrow about a sick bobbin I picked up...for a teaser, click here.