Growing up in South Philadelphia in the early 80's, this term would have been used in the ghetto for any old raggedy ass, nasty, beat up shit kicker that all of the school kids would have accused your mother of buying at the Salvation Army, but usually of the Chuckie's variety. YOU KNOW short top with rubber tip. They were often found hanging, like Christmas ornaments from every telephone line... 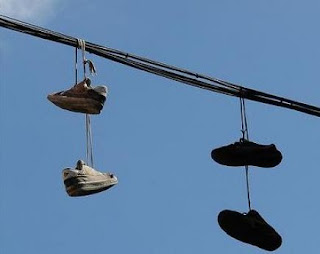 In my area of the country, we call anything that's fake, generic, unbranded, or store brand, "Bo Bo."  It probably does stem from the reference mentioned above as my first exposure to the term as a kid was in the context of my Mom's shoes.  See she's always been quite fond of wearing dirt cheap white Bo Bo sneakers that you buy at the supermarket or Clover (another Philly reference - think ghetto Target) rather than the real Keds or Converse that they resemble.  They're like walking with cardboard and paper bags on your feet.


Generic stuff might have a different definition in your locale, but I think you all know what I'm talking about.

To this day, I absolutely draw the line at buying three Bo Bo things (other than sneakers).  They are as follows:

However, being Bo Bo is not always necessarily bad.  Here's an example of three Bo Bo things that I do use.

In taking an inventory of my fishing equipment the other night, I noticed a relative lack of Bo Bo gear and wondered if I'm missing out on something good.  The handful of Bo Bo items included the following:


Now here's where I'm going to toss out a request for some reader participation in the comments section.  What I want to know is am I missing out on some great Bo Bo fishing (or hunting) gear?  Are there off-price or store brand items that you use that really perform or that you even *gasp* prefer?

If not...go ahead and humor me with some examples of Bo Bo products you use in your non-fishing lives. The more obscure the better.  But don't dare mention Hunt's ketchup.  That's blasphemy.