I received a preview copy of 'The Lost World of Mr. Hardy' DVD yesterday; it's a movie I had read a little bit about online over the last few months.  The documentary on the rise of the Hardy Brothers' (later known as The House of Hardy & today Hardy & Greys) tackle business in the mid to late 1800s debuted in England in 2008, but is just beginning to make the rounds in the United States this year.  With the following that the Hardy brand has, there's obviously been some buzz generated.

The Lost World of Mr Hardy (trailer) from Trufflepig Films on Vimeo.

As I mentioned above,  'The Lost World of Mr. Hardy' traces the company back to its roots in the late 1800s, when the Hardy Brothers decided to take their engineering backgrounds into the fishing tackle business.  They were actually one of (if not the) first to apply engineering principles to products like fly rods & reels, and because of it were able to build quite a large business and following around what many considered the most superior tackle of its day.

The strength of this film is really all of the great historical pictures & footage intermingled throughout the story. Jim Hardy's recollections of his family's past narrate many of these seldom seen treasures and his role in this film cannot be understated.

Photos of the first small retail shops, and later their larger factory "compound" in Alnwick where everything - split cane rods, the "Perfect" reel, (the first ball bearing fly reel) & "Zane Grey" Big Game reel, as well as all of the fly tying - was all done by hand.  Black & white film from the 1930s of L.R. Hardy hooking a 40 pound salmon and then handing his rod to his assistant to land the fish (as not to ruin his shoes or trousers) is priceless.

The main theme throughout the film focuses on how this (sometimes eccentric) family-run company took pride in doing everything with perfection in mind - manufacturing, tackle catalogs, film, retail storefronts - and how generation after generation of local families spent a good portion of their lives working in the Hardy factory.

Therein also lies the tragedy of this film - when Hardy is sold in the late 1960s and a few decades later takes 95% of its production off-shore. Hardy products (& the corresponding jobs that go with them) then no longer reside in England.  Interviews with several former employees echo this sentiment, you can clearly see & hear the pain in their eyes & voices. Despite the fact that Hardy still makes quality products today, the feeling that this special era of art & craftsmanship that made the company great is unfortunately over. Write it off to the "way of the world" today, but it's heartbreaking nonetheless.  A nice little segment on two artisans still making split cane rods & fly reels by hand in the Hardy tradition however will lift your spirits right before the closing credits.

Even if you don't really care for fishing, if you're into historical films in general (like me), 'The Lost World of Mr. Hardy' might just be your cup of tea.  It runs a little over 90 minutes, and I'm not going to lie - there are sections of the film that can be a little bit slow, but overall the production quality is superb, the interviews entertaining, and the amount of vintage footage and materials reviewed make it well worth watching. 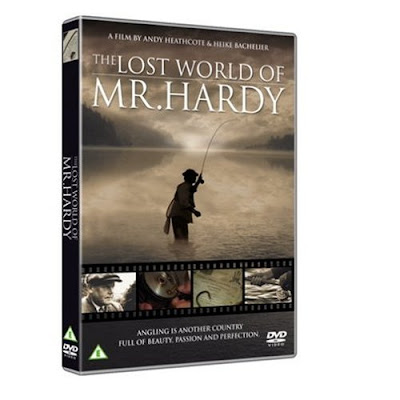 'The Lost World of Mr. Hardy' is currently available online at Film Baby.com and Amazon.com, but may also be available at your local fly shop. Support your local businesses and give them a ring first.


DISCLAIMER:
The preview copy of 'The Lost World of Mr. Hardy' featured in this product review was provided to me at no cost by Trufflepig Films, the producers of the this film; I currently hold no association with Trufflepig Films, Andy Heathcoate, or Heike Bachelier whatsoever.  As with all independent gear reviews at Troutrageous!, I try my best to keep my reviews honest and unbiased. If something is good, it deserves applause; if it sucks, I'll let you know that too. That said, I probably wont waste my or your time writing a post about something that sucks, unless it's really that bad.