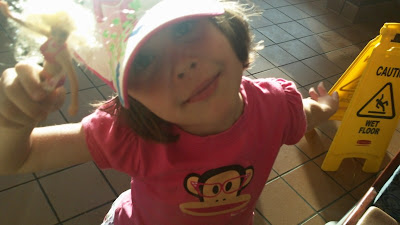 Ok, 3 nuggets and some fries later, Lilly and I headed over to Sanatoga Park.  We tried the park the other night without much success, but I told Lilly "tonight, we'll catch some fish."
When we got there, there were lots of bugs in the air, and you could see lots of fish (I don't know what's in there) rising all over the place.  Lilly just wanted to cast her Barbie rod, so I let her at it.  She still gets it tangled up quite a bit waving it around before she casts...but when she gets a clean one off, look out! 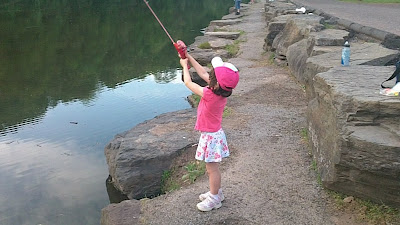 In between untangling her line and taking pond gunk off her hook, I worked the edge of these lily pads (lower left) with my tenkara rod and a dry fly. 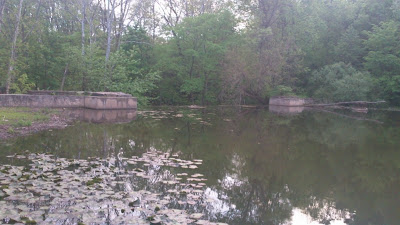 Unfortunately, Lilly didn't catch anything.  She refuses to let me buy her real worms because they are "yucky...blaaah," so instead she used trout magnet worms under a small float.  Luckily, she did find a big pile of rocks and dirt, and had fun throwing them in the water (& getting filthy from head to toe) to keep herself occupied since fishing was slow.  I kept asking her if she wanted to go home - after all, we went out for her to go fishing - but she kept saying "no Daddy, I want to throw rocks."  Hey, as long as she was having fun, that's all that matters.

A few small guys decided to hit my fly, which was good so I could at least prove to Lilly there were fish in the pond.  She got really excited when I had them on the hook, but when I tried to hand her the rod to bring them in she'd hug my leg and tell me "Ewww no, fish are icky."

These pictures are kinda bad, hadn't figured out that the camera/camcorder I was using really doesn't handle closeups well.  No biggie, at least is wasn't a pic of a 18" trout or anything. 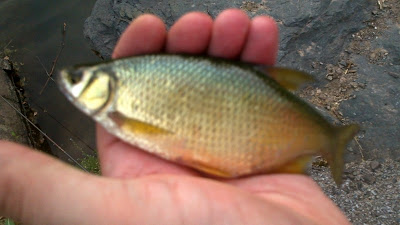 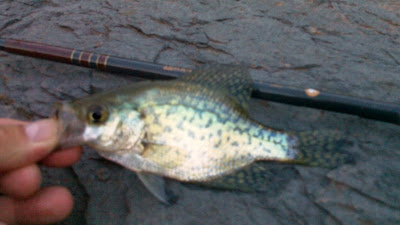