About a month ago, I was cruising a bunch of fishing websites (researching a Hobie MirageDrive Kayak) and stumbled upon the Hobie Polarized sunglass line.  I had always associated Hobie brand with surfing & the beach lifestyle, but I was surprised to learn from their website that they have an extensive Pro Staff of anglers as well.

Interest raised, I reached out to them with some product questions, which quickly evolved into a product review (& giveaway promotion - more on that tomorrow) for Troutrageous! readers...

I received a pair of Hobie Heritage Series Bayside Polarized Sunglasses in Tortoise/Copper just in time to put them through a day of extensive testing on the water during the PAanglers.com fishing get-together on May 22nd in Jonestown, PA.

Here are the Bayside's product specs, taken from the Hobie Polarized Website:

WHAT'S IN THE BOX:
In addition to the product itself, the sunglasses came with a soft (but with some backbone) glasses case with a carabiner clip, a neoprene sunglass strap, microfiber cleaning cloth, warranty card (frames carry a lifetime warranty from manufacturing defects, the lenses carry a 1-year warranty), and a small Hobie booklet which outlined all of their product lines including surfing, sailing, kayaking, and swimwear.  I believe some of these extras, like the case & strap, are exclusive to the Heritage Series. 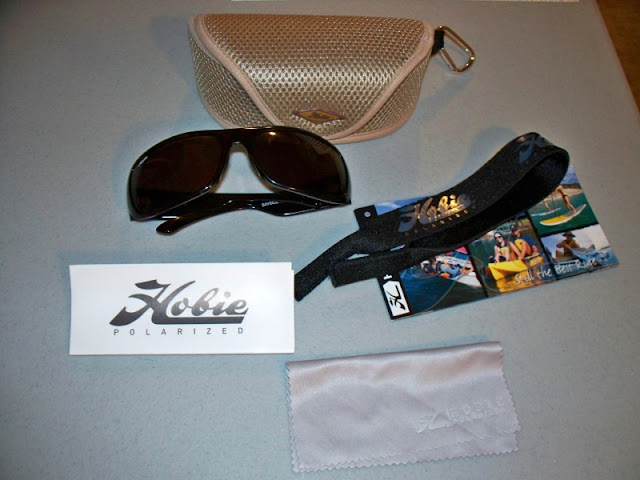 The first thing I noticed is that these sunglasses are pretty light.  The Bayside is considered an "XL" frame, so I was concerned that the larger size and glass lenses (not plastic or polycarbonate) might be a bit heavy.  They aren't, they are actually quite light.
Upon trying them on they did fit comfortably.  I don't have a particularly wide head but they provided adequate pressure on my temples so that I didn't fear they would slide or fall off with a quick head movement.  They also have flexible hinges, so an extremely wide noggin shouldn't stretch them beyond their limits.  I went with the XL size frame because I felt that it was perfect for fishermen - the large lenses & thick side arms cover a greater surface area, keeping more sun and glare out.
The only initial concern I had is how they would hold up if I dropped them.  What...so I'm clumsy...  Since they are very light, my thoughts went to them being easily damaged, fragile even.  I didn't plan on throwing them like a fastball against a brick wall as a test, but perhaps a drop or two on the stream bank would be in order...

ON THE WATER PERFORMANCE:

I'll be honest, the day I tested them, the sun was playing peek-a-boo from behind the clouds all morning and I was fishing somewhat muddy water.  Not the best environment to test polarized sunglasses.  It wasn't until the later in the afternoon when the sun decided to come out and we moved to a different creek that I finally had a chance to stretch the legs on these suckers.
As promised, the Hobie polarized sunglasses did a great job of reducing glare in the water.  We were fishing some backwaters off the Swatara Creek and I could pick out each little sunfish, fallfish, and baitfish that swam through the hole or followed my lure as well as most of the features on the creek floor.  It was pretty entertaining, and made the fishing pretty fun.  I've worn polarized glasses in the past - including some top brands like Smith & Bolle, and these Hobies were at their level, if not slightly better in reducing water surface glare.
I also decided to "accidently" drop them a few times by mistake.  Once in the water, once in a gravel pile, and once from a large rock.  No, they didn't float, but they also didn't break either.  Luckily, the glass lenses really didn't scratch or mar.  Just a quick swipe from the bottom of the t-shirt I was wearing, and the lenses were clean and ready to go again.  Pretty low maintenance.

WRAP UP:
So to conclude...in a world of Oakleys, Maui Jims, & Costa Del Mars, are Hobie polarized sunglasses worth considering the next time you plan on upgrading your fishing optics?  Probably.  They are light, do a good job of cutting glare from the water, and at least in my staged tests, proved to be relatively durable.  At the root of things, that's all you can really ask for out of a pair of fishing sunglasses. That, and they do look pretty good too.
DISCLAIMER:
The sunglasses tested in this product review were provided by Hobie Polarized at no cost and carry an MSRP of $190.00. As with all independent gear reviews at Troutrageous!, I try my best to keep my reviews honest and unbiased. If something is good, it deserves applause; if it sucks, I'll let you know that too. I was born, raised, & currently live in the Philadelphia area - it's in my DNA to boo, throw snowballs, and taser where appropriate.