St. Patrick's day hasn't really registered for me lately.  Haven't celebrated it in proper form (i.e. going out and drinking away large quantities of brain cells) since I was in college...a wondrous time which sadly gets more distant by the year.  I'm not Irish (Italian & German heritage), but interestingly enough do live in a town called Limerick.  I don't really care for green beer, but I think McDonald's Shamrock Shakes should be offered year-round.

What does all this mean?  Absolutely nothing.  I just felt the need for some sort of soliloquy to lead into a post about some Irish trout I've never heard of before.  They're all kind of along the lines of brown trout...but interesting nonetheless. 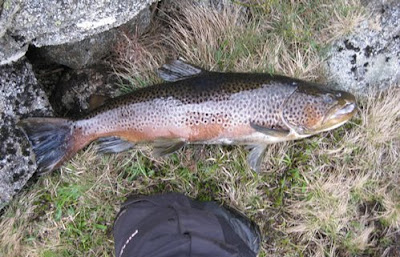 The Ferox trout, Salmo ferox,  is one of Ireland's most famous trout races. This is principally due to the large size which it can attain.  The word "ferox" means ferocious and is attributable to this trout's reputation as a fierce predaor and to its ugly appearance (characteristically the head is angular and grows out of proportion to the rest of its body enabling it to eat larger prey).

(Salmo stomachius)  Gillaroo is derived from the Gailge or Irish for Red Fellow (Giolla Rua).  This is due to the fishes distinctive colouring.  It has a bright buttery golden colour in its flanks with bright crimson and vermillion spots. The gillaroo is a beautiful creature characterised by deep red spots and a "gizzard" which is used to aid the digestion of hard food items such as water snails.
Sonaghen Trout

The sonaghen trout (Salmo nigripinnis) is a species of salmonid unique to Lough Melvin. It can have a light brown or silvery hue with large, distinctive black spots. There are sometimes small, inconspicuous red spots located along its posterior region. Its fins are dark brown or black with elongated pectorals.
Croneen Trout 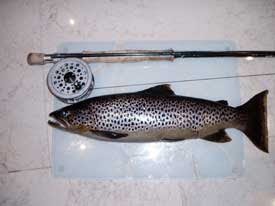 The Croneen is a famous migratory brown trout, which run from Lough Derg, up through the little Brosna and into the Camcor River, near Birr, Co. Offaly. The fish are similar to a sea trout in their appearance (silver with black spots) and in their behaviour (shoaling and night feeding). The best time to fish for them is at dusk or at night with a small dark seatrout fly.
If you found this post interesting or want to learn more about Irish trout, please visit the Irish Char Conservation Group's website.  All trout descriptions were admittedly heavily borrowed from this excellent resource.
Posted by Michael Agneta at 1:46 PM