Bob Barker is at it Again!

Nope, he's not spaying & neutering your pets...his anti-whaling ship is making waves off the coast of Antarctica.

If you're a regular to Troutrageous!, you may recall a post I made in January about a collision at sea between a Japanese whaling vessel and some sort of anti-whaling spaceship looking boat (the best way I can describe it), that resulting in the spaceship getting torn in two and sinking.

Well another ship in Sea Shepherd's fleet, the Bob Barker (named after the game show host who made a big donation), collided with another Japanese whaler.  Click here for full AP article.  Who was at fault is up for debate as fingers are being pointed in both directions - but is clear is that if these guys keep it up at this pace, somebody is going to get hurt, if not worse. 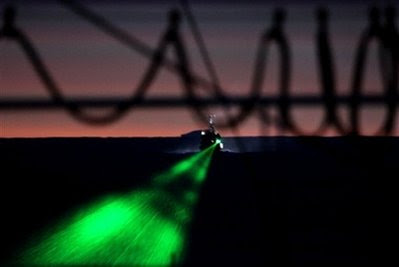 In this photo released by the Institute of Cetacean Research of Japan, anti-whaling group Sea Shepherd's ship the Bob Barker fires a laser beam at the Japanese whaling ship Nisshin Maru in the waters of Antarctica Saturday, Feb. 6, 2010. 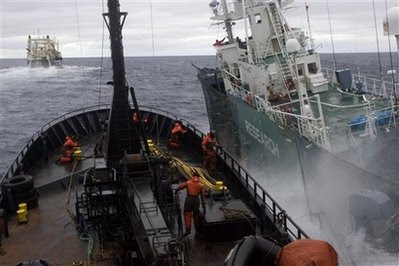