Watch Where You Touch that Ghostshark!

I really can't say anymore than the article does below. If it wasn't National Geographic, I'd question it:

California has a new star, the Eastern Pacific black ghostshark. 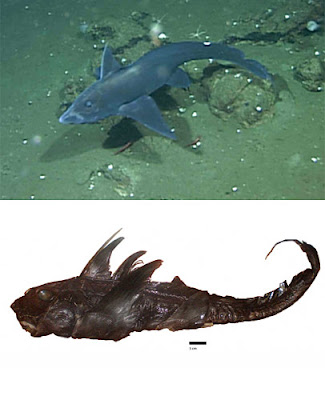 But the newly identified species prefers to stay out of the sun—and the spotlight. And with a club-like sex organ on its forehead, the male ghostshark isn't likely to get any leading man roles.

Pictured alive underwater (top) and preserved in a museum collection (bottom), the new ghostshark uses winglike fins to "fly" through its dark habitat, thousands of feet deep off the coasts of California and Mexico's Baja California peninsula, a new study says.

The ghostshark seems to have flown under the scientific radar too. Since the 1960s experts have been finding specimens of the strange, 3-foot-long (0.9-meter-long) fish, which ended up nameless in museum collections around the world.

It wasn't until after a team recently searched through shelves of "dead pickled fish" that the Eastern Pacific black ghostshark was recognized as its own new species, said study co-author Douglas Long, chief curator in natural sciences at the Oakland Museum of California. The specimens' unique proportions, precisely measured, gave the fish away as a separate species of ghostshark.

Read the rest of this article at National Geographic.com:
http://tinyurl.com/ghostshark
Posted by Michael Agneta at 2:38 PM