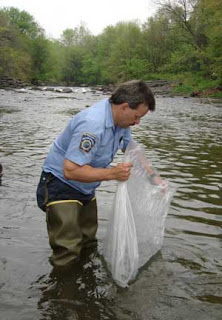 Anglers are anxious for the release of nearly 6,000 rainbow and brown trout being trucked in from the state hatcheries in Huntsdale, Pa.

They'll be released into Wissahickon and Penny Pack Creeks. Water Ways conservation officer John Pedrick, with the Pennsylvania Fish and Boat Commission, says the creeks have been stocked with fish since 1933:

"Normally the trout season is in spring. What we found out is that the water in the Wissahickon and the Penny Pack is exceptional and has really really sustained winter fishing and would love for it to be native but we do stock the fish."

Pedrick says if you would like to help in the release, volunteers are needed:

"We take them out of the truck in buckets and put the buckets of fish into the creek."

You can go to either to Penny Pack Creek at Pine Road in Northeast Philadelphia or at Forbidden Drive and Northwestern in Chestnut Hill at 12:30pm this Wednesday to help in the release