Please Keep These in the U.K.

I must admit that one of my favorite channels to watch is The History Channel, but it's not why you'd think. The History Channel airs this show called Monster Quest - where these "scientists" go out and try to find things like the Sasquatch, 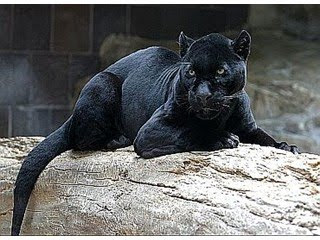 Chupacabra, Swamp Monsters, Living Pterodactyls, and crazy stuff like that. A recent episode was about "big cats," where they claimed that black leopards or jaguars were running around the forests of New York state.

They tried to track them using infrared cameras and stuff, found what they thought were some tracks and claw marks, but no cats themselves. The deduction was that somebody kept the exotic cats as pets, and when they got too big ditched them in the woods.

Now with that random segue complete, here's an article I found about a South American piranha in the River Torridge (U.K.), a waterway more commonly home to brown trout and salmon.

The Environment Agency said its staff were amazed to find a dead piranha in the East Okement tributary of the River Torridge. 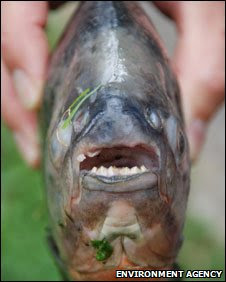 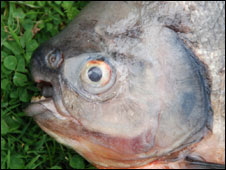 The piranha, which has razor-sharp teeth, is generally considered to be the most ferocious freshwater fish in the world.

The 35cm (14in) fish was spotted by Bob Collett, Dave Hoskin and Eddie Stevens during a sampling trip on the river. Among the species the team would have expected to find in the river were salmon, brown trout, bullheads, stone loach and minnow.

"What we actually discovered was something we would not expect to find in our wildest dreams - we could hardly believe our eyes," Mr Stevens said.

"After completing 20m of the survey, a large tail emerged from the undercut bank on the far side of the river.

"Our first thought was that a sea trout had become lodged in amongst the rocks and debris collected under the bank, but when it was removed from the river we were speechless to find it was a piranha."

Tests carried out on the dead piranha revealed it had been eating sweet corn, which proved it must have been kept as a pet.