Here's a little article about a dam removal in Allentown that should have a positive impact on the fishery.

Jordan Creek's Waters to Flow Free
Environmental group and chemical company partner to remove dam with no purpose
By Brian Callaway OF THE MORNING CALL
August 18, 2009

They finally decided the dam on the Jordan Creek wasn't worth a ... darn.

So a chemical company and an environmental group are having the old concrete barrier obstructing the Jordan just north of Allentown demolished this week, hopefully opening up miles of creek for trout and herring to spawn. 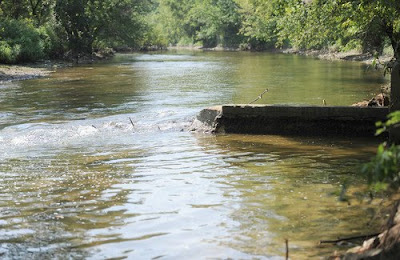 This dam on the Jordan Creek is slated for demolition this week. The dam serves no apparent purpose and officials aren't completely sure why it was built in the first place. (Monica Cabrera/The Morning Call / August 17, 2009)

''It's very important,'' said Sara Strassman of American Rivers, which is working with GEO Specialty Chemicals to tear down the old dam near the company's South Whitehall Township plant. ''This is sort of a new legacy of how we are going to treat our rivers.''

No one seems certain how long the dam has been there or what it was built for -- it hasn't had any identifiable purpose for years other than serving as a convenient place for sediment to congregate.

The structure was known as a ''low-head'' dam, meaning only a few feet of it were visible above the creek bed and water was fully capable of flowing over it.

Fish were less capable, though.

Strassman said species such as river herring should be able to make it into the upper stretches of the Jordan from the Lehigh River. But the dam prevented that from happening; such obstructions can also affect water quality, making it harder for fish to survive near them.

There are an estimated 7,000 dams in Pennsylvania, Strassman said, but only a relatively small batch of them are actually used for anything now.

Many of those dams were built decades ago for such purposes as aiding in milling operations or measuring the rate at which water was flowing in a stream, but have long since been abandoned.