I read an article today in the new Field & Stream magazine about one of the upcoming issues for Pennsylvania trout anglers; the huge demand for Marcellus Shale Natural Gas. The shale runs from West Virginia, right through PA, up into New York state, and traps a gigantic reservior of natural gas beneath it. Drilling has already started in Western PA and is spreading like wildfire. How much is this gas worth? Well, the estimated worth of PA's share would be upwards of 1 trillion dollars. Yes, that's trillion.

So assuming the state gets some cut of this action, this is great news, right? Well, not exactly...as there are some pretty significant environmental side-effects to this drilling. First off, it requires quite a bit of water to make it go. And where does this water come from? Right out of local streams & rivers. Also, the development of the infrastructure to make the drilling possible will create a significant amount of additional run-off, meaning higher temperatures and (potentially) more toxins in the water. Neither would be things good for coldwater fish, such as trout. 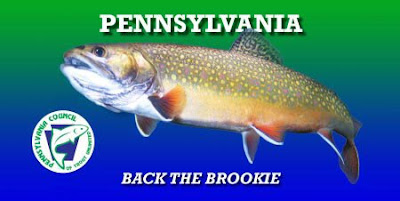 Realistically, no matter what concerned anglers do, the corporations will likely win out. When you're talking about a trillion dollars up for grabs, I they'll undoubtedly be fighting pretty hard for this. What that means for the future of (wild) PA trout...to be determined.

Posted by Michael Agneta at 9:50 PM